The big issue to be decided at Thursday’s ECB meeting is the pace of bond purchases in their Pandemic Emergency Purchase Programme (PEPP).

Just to remind you, the PEPP is “a non-standard monetary policy measure initiated in March 2020 to counter the serious risks to the monetary policy transmission mechanism and the outlook for the euro area posed by the coronavirus (COVID-19) outbreak.” It was initially set at EUR 750bn, then raised by EUR 600bn in June and by another EUR 500bn in December, for a total of EUR 1.85tn. The Governing Council said it will end the purchases “once it judges that the COVID-19 crisis phase is over, but in any case not before the end of March 2022.”

At the April meeting, they said:

Since the incoming information confirmed the joint assessment of financing conditions and the inflation outlook carried out at the March monetary policy meeting, the Governing Council expects purchases under the PEPP over the current quarter to continue to be conducted at a significantly higher pace than during the first months of the year.

And indeed, since the April meeting, purchases have averaged EUR 24.6bn a week, vs EUR 18.4bn a week in January – March. 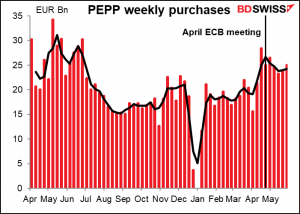 The key phrase in the paragraph above is “over the current quarter,” i.e. April, May, and June. That means they have to decide at this meeting whether to continue buying bonds at this pace or to slow down their purchases, which could be considered “tapering.”

The decision is finely balanced, in my view.

Note that the Council mentioned “financing conditions and the inflation outlook” in their decision to increase the purchases. Financing conditions are extremely loose. Cutting back the purchases would probably not disrupt things that much even if it were interpreted as the beginning of “tapering,” much like the Bank of Canada did at its April meeting. 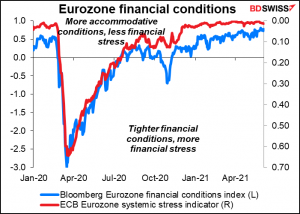 On the other hand, the inflation outlook is not yet to their liking. The inflation forecasts were revised down at the March meeting; the ECB staff now expects that it will take until 2023 to reach the inflation rate that they had expected to reach last year (1.3%), which is still far below their 2% target. 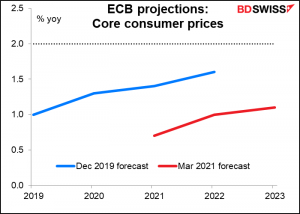 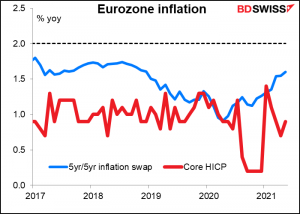 Furthermore, while new cases of the virus have come down dramatically, it’s still way too early to say that “the crisis phase is over,” especially as new variants circulate. 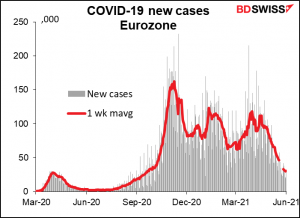 I suspect that the Euro will be the determining factor. The issue came to the fore in September last year, when ECB Chief Economist Lane made a speech in which he pointed out that the level of the euro did matter for the ECB because of its impact on inflation. That was followed a few days later by an ECB meeting that incorporated a comment on the exchange rate into its forward guidance. [“…the Governing Council will carefully assess incoming information, including developments in the exchange rate, with regard to its implications for the medium-term inflation outlook.” (emphasis added).] EUR/USD was around 1.18 at that time; now it’s close to 1.22. (Although I should note that the ECB’s nominal trade-weighted index is actually about 1% below where it was then, so they really have nothing to complain about.) 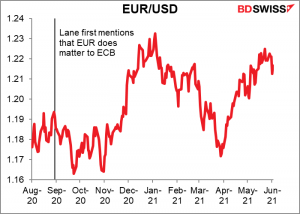 The ECB is surely aware of what happened to USD/CAD when the Bank of Canada tapered its bond purchases. 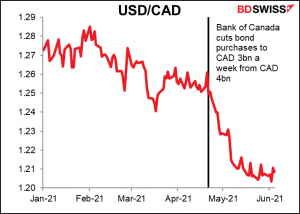 If they decide to continue purchases at the current pace – which is what I expect — I think EUR/USD would probably weaken a bit. It’s not a change in policy so it’s not cause for a major rethink of the outlook for the currency, but it would remove one risk.

Generally speaking, volatility in the FX market on ECB days hasn’t been anything extraordinary recently unless they’ve changed policy. There is going to be some decision this time, so either way could be considered a policy move and could result in increased volatility. I think on a decision to keep purchases unchanged we could see EUR/USD test support at around 1.2160 and perhaps move down to 1.2130, which would still be within the recent trading range. 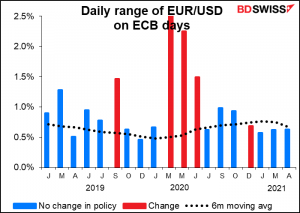 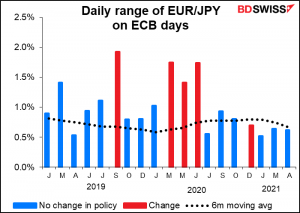 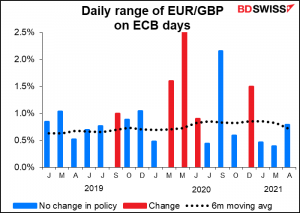 The main reason I could be wrong is the new staff forecasts. The ECB staff will issue a new set of forecasts that is likely to have a faster growth and higher inflation profile. That could be a reason for trimming the bond purchases, perhaps with a big explanation that they’re not “tapering” but just returning them to their previous pace as financing conditions are loose and the vaccine rollout is going well, etc etc. Or they could portray it as an operational decision rather than a strategic one, as the Bank of England did when it slowed the pace of its bond purchases back in May. That might cushion any upward pressure on EUR.

Following the meeting, the market will inevitably begin to consider, when will the ECB end the PEPP? Will then end it at the earliest possible date, namely next March? Will they continue to buy bonds after March, but just at a slower pace? That’s the next topic for speculation. We should hear something about that by the December meeting, if not sooner.