You are at:Home»WEEKLY PREVIEW»The Bank of England Joins The Twisters

How odd…I had thought that central banks would be off my list of topics for months as they’ve all promised not to raise rates for several years, but on the contrary I find myself listening to them just as closely as before, if not more so. They all seem to be singing the same song: the familiar “twist” again. But how they dance to that song differs.

We’ve seen the same thing from so many central banks, by now it must be the consensus view: near-term, things are going to be worse than we expected because of the surge in the virus, but longer-term they’re going to be better than we dreamed. Vaccines appeared earlier than we thought, economies are more resilient than expected, and soon

Here’s what the Bank had to say:

GDP is projected to recover rapidly towards pre-Covid levels over 2021, as the vaccination programme is assumed to lead to an easing of Covid-related restrictions and people’s health concerns. Projected activity is also supported by the substantial fiscal and monetary policy actions already announced…Spare capacity in the economy is eliminated as activity picks up during 2021.

The big focus for the meeting was on what they would decide with regards to negative rates. The Committee opted to ask banks to be prepared to implement negative rates “at any point after six months,” but bracketed the request in clear statements that “it did not wish to send any signal that it intended to set a negative Bank Rate at some point in the future…these requests…should not be interpreted as a signal that the setting of a negative Bank Rate or a tiered system of reserve remuneration were imminent, or indeed in prospect at any time.”

The Committee assumes it will take six months before banks can implement negative rates. What will the state of the UK economy be in six months? Much much better, on their assumptions. They expect that a year from now, the economy will be booming, inflation will be back to target and –the key here – the output gap will have closed (that’s excess supply/excess demand). Could it be that six months before we emerge into this economic Edan, the economy will be in such dire straits that they’ll need to implement the unprecedented (for Britain) step of negative rates? Not likely!

As a result, the overnight index swap (OIS) market is no longer pricing in negative rates in Britain. 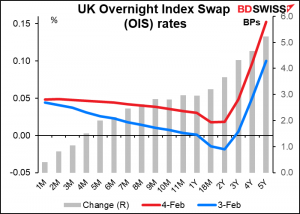 The Reserve Bank of Australia (RBA) also released its Statement on Monetary Policy with its updated forecasts. Their “twist” was different than the others: they’ve managed to conquer the pandemic much earlier than most other countries (Australia is down to single-digit numbers of new cases every day). As a result they are much more optimistic about the near term, which means bringing forward some of the growth that they expected to see in the latter half of the year. But unlike the UK, they don’t see inflation returning to their 2%-3% target range within the forecast period.

The RBA doesn’t have a formal “dual mandate,” but they seem to place as much if not more stress on employment anyway. Before the pandemic they were talking about getting unemployment down to around 4 ¾%. Here too the RBA forecasts that they will fall short of their goals. Thus on these forecasts, the RBA is likely to keep its policy in place for the next several years. This would tend to weaken the AUD if other central banks start to unwind theirs. 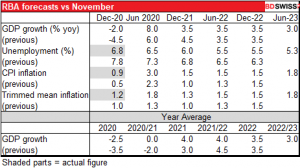 OK, may I say it? At least I resisted the temptation to give my weekly this title:
Enter the Draghi

Italy jitters have been receding for about two weeks now, but it’s clear from the spread between Italian government bonds (BTPs) and German government bonds (Bunds) that the decision to ask former European Central Bank (ECB) president Mario Draghi to form a new government has been received well by the financial markets. The man who said he would “do whatever it takes” to hold the euro together is certainly going to do whatever it takes to hold his country together too, although in the end that may be a more difficult task than holding all of Europe together. 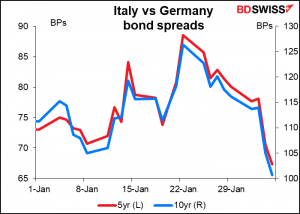 The question is, what impact does Italy have on the euro? It’s quite clear that when there’s a systemic risk among all the peripheral European countries, it generally coincides with a weak euro (although the causation could run either way). 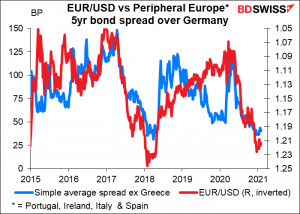 However it’s not clear how much a crisis in Italy by itself will impact the euro. The graph below shows the Italy-Germany spread minus the average of Portugal, Ireland, and Spain’s spread over Germany. That spread will rise when Italy is specifically in distress, rather than when the group as a whole is in distress. As you can see, the correlation with the euro is nowhere as good. An Italian crisis is not necessarily a systemic crisis for the euro, although given the size of Italy’s economy and its bond market, it certainly can be. 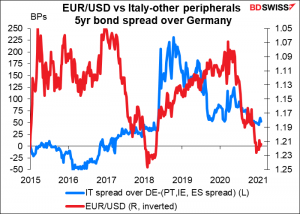 Next week: not much to worry about

Next week should be relatively calm. At least, the “known unknowns” aren’t that big, although of course there are always the “unknown unknowns” that can trip us up. There are no major central bank meetings and, as it’s the second week of the month, few major indicators. Plus Thursday is the start of China’s Lunar New Year holiday, meaning that country should be relatively quiet for most of the time.

The big day of the week – in fact, about the only day when there’s anything important going on – is Wednesday, when we have:

a) China’s inflation data
b) Britain’s “short-term indicator day,” including Q4 GDP
c) US CPI; and
d) a speech by Fed Chair Powell 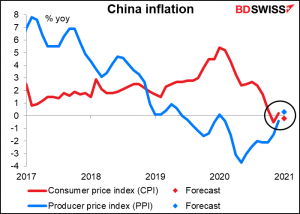 Some people argue that as economies recover, inflation will accelerate because governments have pumped up the money supply so much, many people have been saving money during this period (due to limited opportunities to consume), and bottlenecks have sprung up (e.g. I just tried to mail a letter by Fedex today but found they’re no longer accepting personal packages, only B2B, because there aren’t enough planes flying nowadays to carry all their packages.)

On the other hand, others note the massive rise in unemployment across the world and idle capacity everywhere and expect that there’s plenty of slack in the system.

China is the laboratory for this: in true FIFO (first in, first out) fashion it was the first country to suffer from the pandemic and the first to exit as well, so we can watch what happens there as an indicator of what might happen elsewhere, remembering of course that every country is different. So far though China’s core CPI – excluding food and energy – has simply continued on what seems to be its inexorable decline. That bodes well for economies around the world. 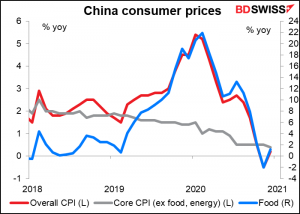 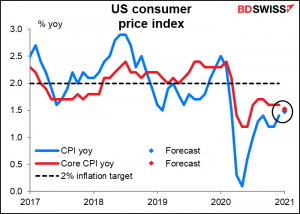 But if we take the figures for the last three months and annualize them, the US is back at the 2% target. Of course this calculation can be quite volatile, as seen from the fact that during the summer it put inflation at over 5%, which was clearly not the case. But it bears watching.

In any event, I think the Fed is more concerned about employment nowadays rather than inflation, and indeed would welcome higher inflation, so it’s not a concern. 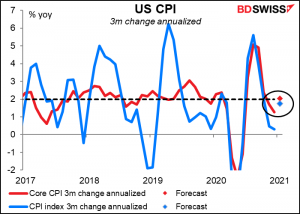 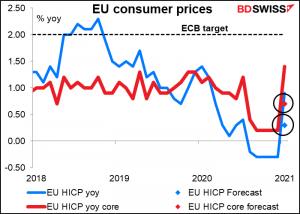 Fed Chair Powell will speak to the Economic Club of New York. There are no details about his speech available yet, but one would assume he’s going to talk about the outlook for the economy and monetary policy. One would also assume he’s not going to say much different than he did on Jan. 27th, exactly two weeks earlier Nevertheless we can expect to pour over his every word for any changes of view.

Wednesday is also Britain’s short-term indicator day, when they release GDP, industrial & manufacturing production, and the trade figures. This month will be particularly interesting because it includes the Q4 GDP number. At the time of writing the market is looking for +0.5% qoq or -8.6% yoy, a little less optimistic than the Bank of England, which estimated it would be down “around 8%” yoy. It’s an improvement from recent estimates of a qoq decline in Q4. 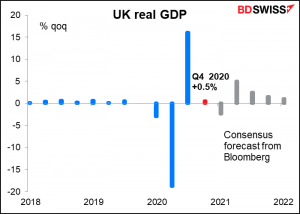 The market does not yet believe the Bank’s forecast that activity will “recover rapidly towards pre-Covid levels over 2021.” However these forecasts are subject to change once we see the details of the Q4 GDP and see how Q1 works out. 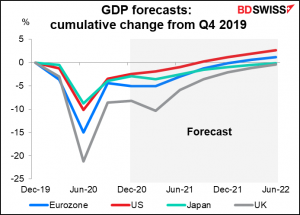 UK industrial and manufacturing production are both forecast to be up +0.5% mom. 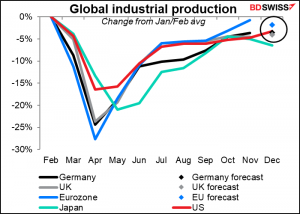 Of course we will also be watching the progress of the US fiscal package and how much the Democrats bend to accommodate the Republicans. And the Senate trial of Trump begins on Tuesday – we’re all waiting to see how many Republicans believe fomenting insurrection and trying to remain in office by force are not punishable by law. 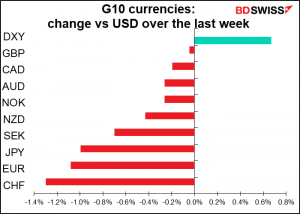