You are at:Home»MARKET PREVIEW»Stocks, Commodity Currencies Soar on Signs of a Slowing in Virus; JOLTS, Japan Eco Watchers 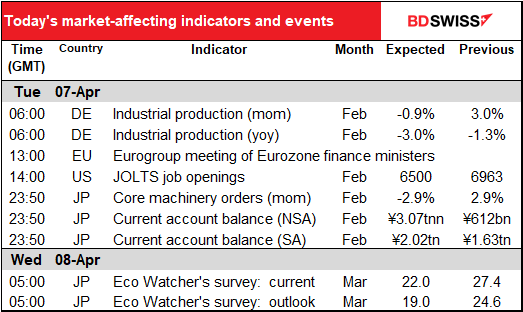 It’s risk on as investors believe that the rate of infection worldwide shows signs of slowing! Italy reported the lowest number of new virus cases in nearly three weeks while NY Governor Cuomo said the death rate in the state has been “effectively flat” for the past two days, showing a “possible flattening of the curve.” The state of New York is the worst-hit in the US (so far), with more than one-third of all COVID-19 cases in the country and about half of the deaths. 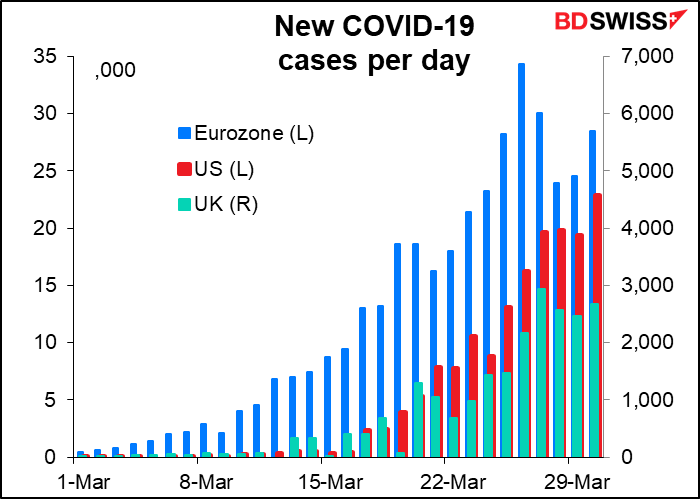 The hint of an end to the crisis sent US stocks surging by 7% yesterday and most Asian markets are green this morning as well, albeit not by as much (India again being the main loser). US stocks have basically been following the lead of Italy, which is seen as the most advanced of the Western countries in dealing with the virus – it was the first to be hard hit and is now the first to see a possible end to the crisis. 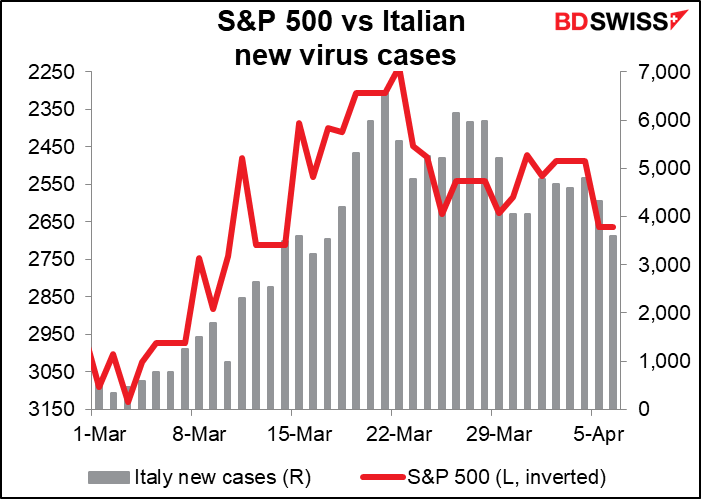 The Shenzhen market is even up slightly (+0.65%) for the year, the only market in the world I could find that’s higher (except Venezuela, which is up 66% YTD, but that doesn’t count). Does this give us an idea of what might happen to stocks once the virus is under control? – that the extraordinary fiscal and monetary measures taken would provide such fuel for stocks that we could actually have an up year? Seems unlikely to me, but then again I wasn’t expecting to be locked in my flat for a month at a time either. 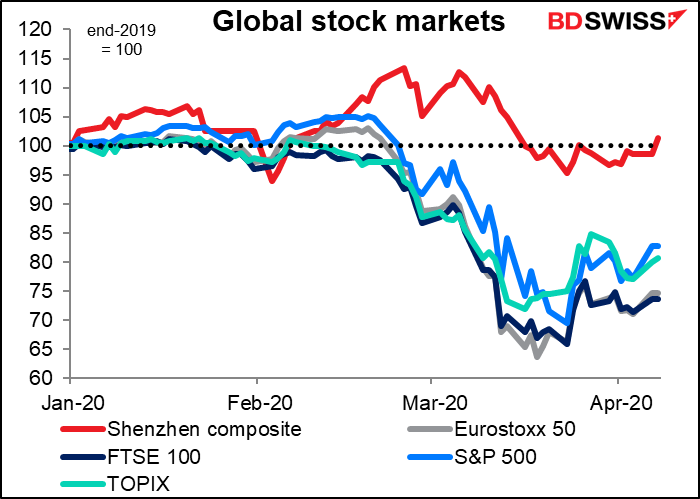 The mood in the FX market was also near-euphoric. The commodity currencies jumped, led by AUD, while USD was the main loser, just edging out EUR by a bit (I’m judging by the trade-weighted indices as shown in the graph above). Silver was up 5.7%.

Oddly enough WTI fell, although Brent continued to rally on hopes for a settlement at the OPEC+ conference call, tentatively scheduled for Thursday. Market talk is that they may agree to a 10mn b/d cut, which wouldn’t be enough to eliminate the global glut (estimated at 20mn-30mn b/d) but might be enough to make it manageable until things got back to normal.

Something I just learned this morning:  the OPEC+ meeting will be followed the next day by a meeting of G20 energy ministers to discuss wider contributions to a production agreement. Maybe we should call that group “OPEC++”. If the G20 – including the US – reaches an agreement to restrain oil production, that would be a stunning refutation of free-market economics on a global scale. Speaking of which, the US Energy Secretary yesterday held what the US government called a “productive discussion” by phone with his Saudi counterpart.

Getting back to the virus, personally, I’m not so sure we should be declaring the “all clear” yet.  One model that I follow closely, that of US consulting firm RSM US, shows that the US and UK at least haven’t reached that inflection point yet by any means. While NY may be starting to flatten, I suspect the problems are just getting started in other parts of the country, particularly the south, which has been slower to implement social distancing measures and coincidentally also has a worse medical system. And until the US situation gets under control – which may be a long, long time – the US and therefore the global economies are likely to suffer. But maybe people think down 18% is enough to discount the likely damage. 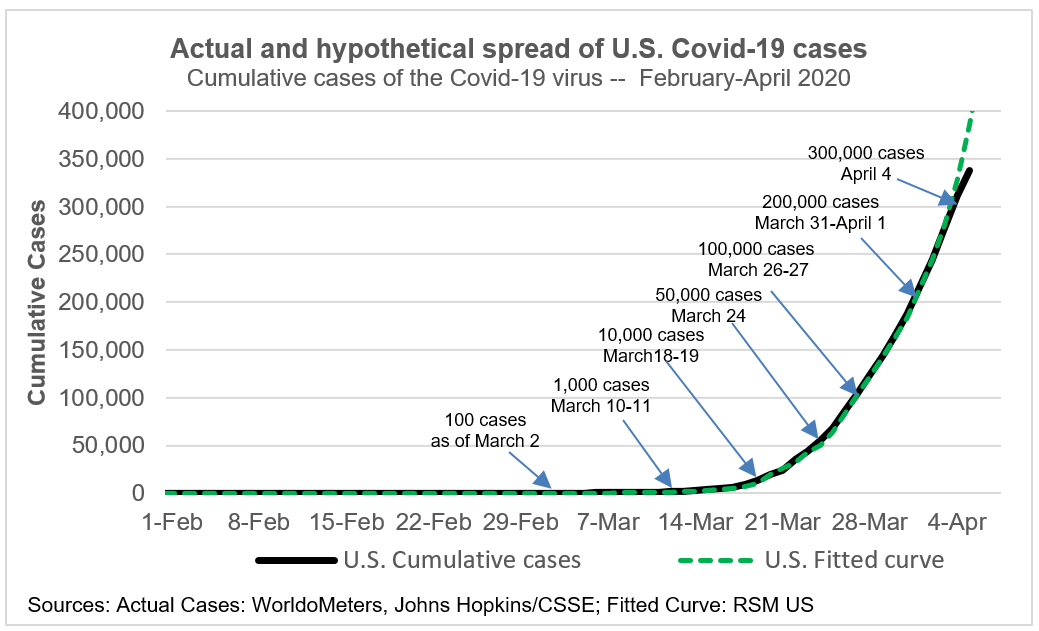 I also wonder if the world can recover while poorer countries struggle with the virus. It’s one thing to tell white-collar workers like me to stay home – I work from home anyway. But it’s totally another matter in countries where most of the people make their living through manual labor and have no savings and there’s little or no social safety net. And with this reservoir of active virus remaining across the world, the richer countries will also suffer recurring breakouts until a vaccine is invented – just look at Singapore, which avoided the worst of the crisis at first but has only now implemented stricter measures.

This is also why I think emerging market (EM) currencies probably still have some ways to go lower despite yesterday’s stunning rally across EM countries (the graph shows the performance of USD vs the EM currencies, so red = a  rise in the EM currency). 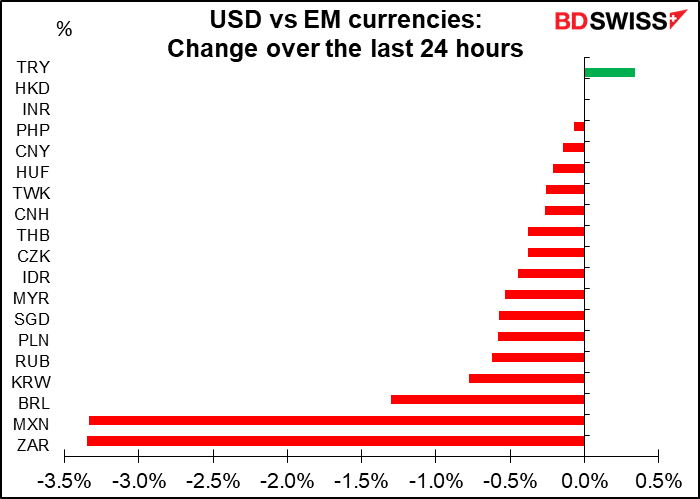 GBP continued to weaken yesterday after it was reported that PM Johnson had been taken into intensive care. Foreign Secretary Dominic Raab is temporarily running the country. I don’t know how this will affect the government’s near-term strategy for dealing with the crisis. And if his condition worsens, the market will start to speculate about the longer-term outlook for the UK government. I don’t think any of the other top politicians in the Conservative Party have anywhere near Johnson’s popularity in the country. I think the downside risks to GBP are considerable.

The “new normal” in the time of COVID-19

Is this what our future looks like? Apple has reopened its stores in Beijing and people are now out shopping. The person who posted this photo on Twitter said it was the most crowded she’s ever seen this store. But note: most of the people are wearing masks, something that was not necessarily the custom in China previously. This may be the “new normal” for some time. 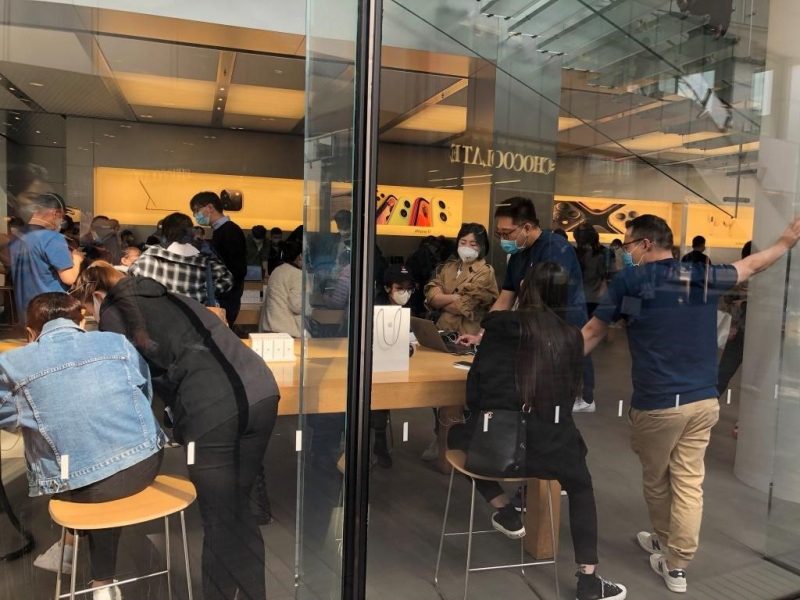 The focus today will be on the Eurogroup meeting of Eurozone finance ministers (a virtual meeting, as is the usual nowadays). This is a follow-up from the European Council meeting of 26 March, which tasked the Eurogroup to come up with some ideas. Press reports suggest that they may present a three-part package: healthcare funding, credit guarantees and an EU-wide unemployment plan modeled after Germany’s short-time working or Kurzarbeit scheme, which pays companies to keep people on their payrolls during downtimes (and thereby minimizes the long-term impact of the recession by keeping the economic structure intact. The package is estimated to be as much as 4.5% of EU-wide GDP, which would be a meaningful amount. It would also reduce the need to issue politically divisive “coronabonds.”

The Eurogroup meeting will be followed by a press conference at 18:00 GMT.

While the EU got off to a slow start because of its fragmented political structure, it’s now moving ahead thanks to its more realistic politicians. By contrast the US effort, which seemed impressive at first, is already running into difficulties as the small business support measures look to be a total failure – firms are having problems accessing the money as banks are unsure about the government guarantees. It looks like the US package was focused on bailing out large corporations and funneling money to favored supporters without any oversight (remember that Trump used a “signing statement” to say he wouldn’t abide by the measures Democrats insisted on to provide transparency about who got the funds). This is yet another reason why I think EUR is going to outperform USD over the medium term.

I mentioned the German industrial production data yesterday – it’s expected to be down. Yesterday’s factory orders figure was down on a mom basis, but by less than expected, and the yoy rate of change flipped to positive. I’m not sure it matters. Wait till you see next month’s data! 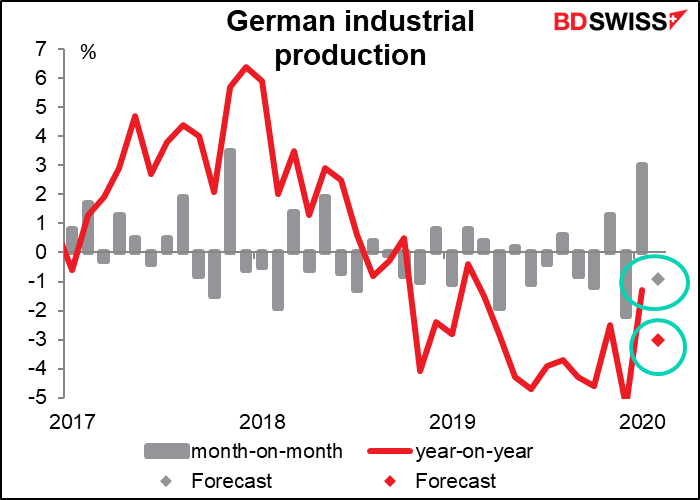 The US Job Offers and Labor Turnover Survey (JOLTS) report is a bit later than the other labor market data we have – this is for February, while we’ve already seen not just the unemployment data for March but also the jobless claims for the last two weeks in March, which were so much higher than all the previous data going back to 1940 that we need to use logarithmic scale to see it properly. The figure is expected to show a decline in jobs, but only back to the same level of December. 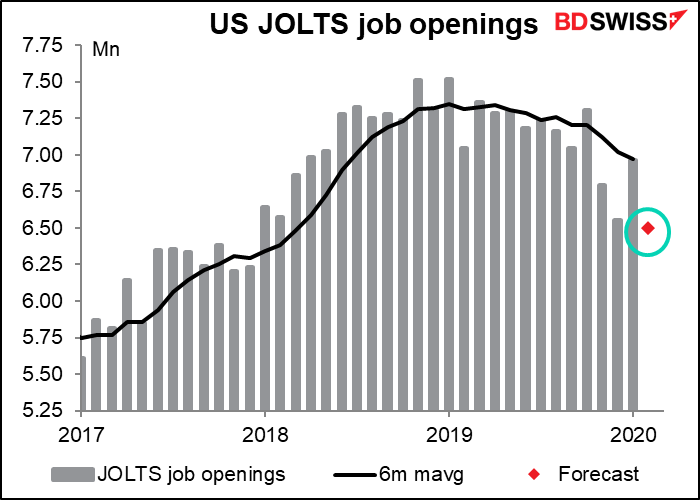 However, even without knowing what the figure is for February, much less for March, the job picture has clearly turned around. Even January’s relatively high number of jobs was less than the number of people who were counted as unemployed in March, and that number no doubt undercounts the real number dramatically. Not to mention that a lot of those job offers in this JOLTS report are likely to vanish in the March and April report. The exceptional period for the US job market from Q1 2018 – when there was more than one job opening for every unemployed person in the country – has come to a sudden stop. 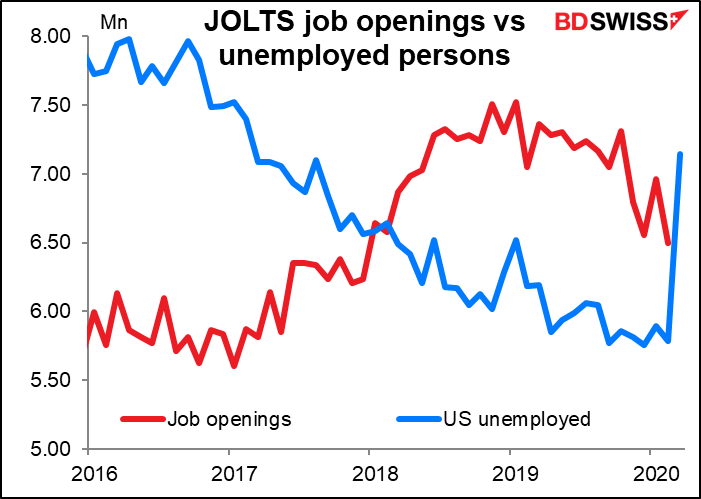 That’s it until Japan comes in. Japanese machinery orders are hard enough to forecast normally – in fact, they can’t be forecast, people just guess at them – but this month they’re likely to be even harder than usual, since foreign orders account for about one-quarter of the total and who knows what China was up to? In any case the declining trend is expected to continue. 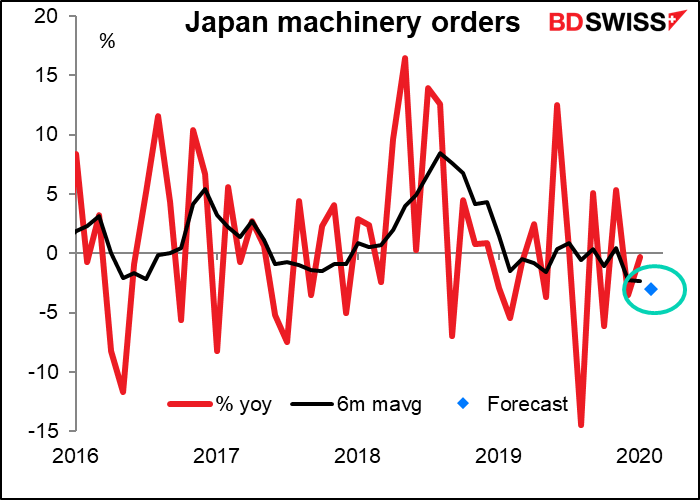 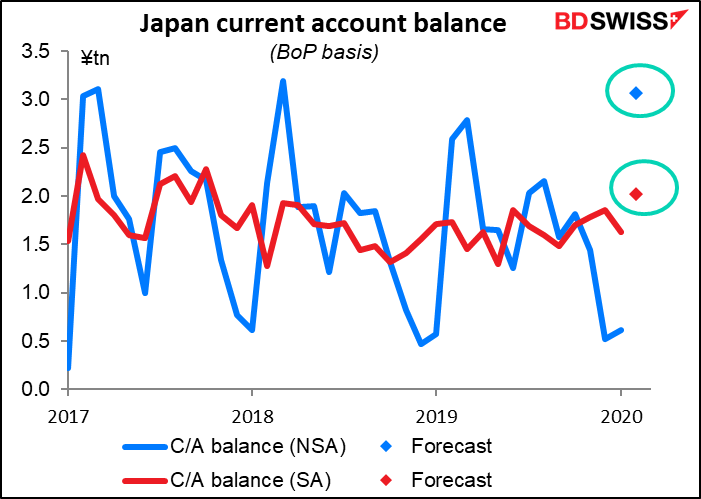 I don’t usually cover Japan’s eco watcher’s survey, but like the US jobless claims, this up-to-date survey is going to be looked at more closely in this liminal period. It’s the ultimate service-sector indicator: a survey of so-called “grassroots” people who work largely in consumer-facing jobs, such as taxi drivers, convenience store managers, barbers, sales clerks, and pachinko parlor operators. It plunged last month (February). This month (March) the level of pessimism is expected to surpass that of the Tohoku tsunami in 2011 and equal that of the Global Financial Crisis in 2008. I don’t know how much more pessimistic they can get unless Godzilla returns. 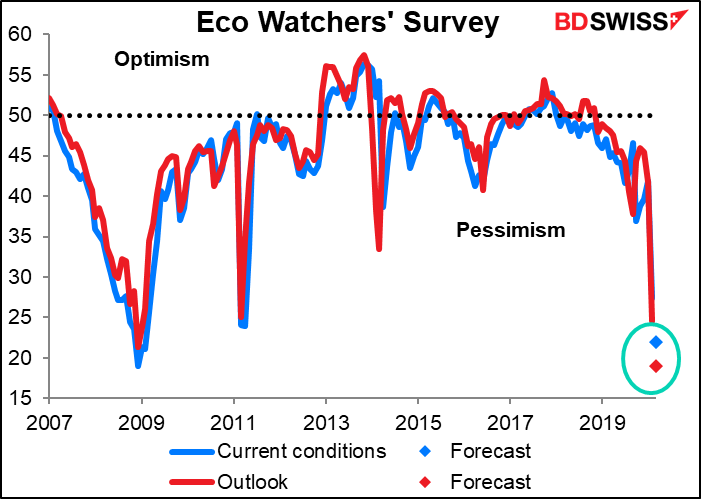 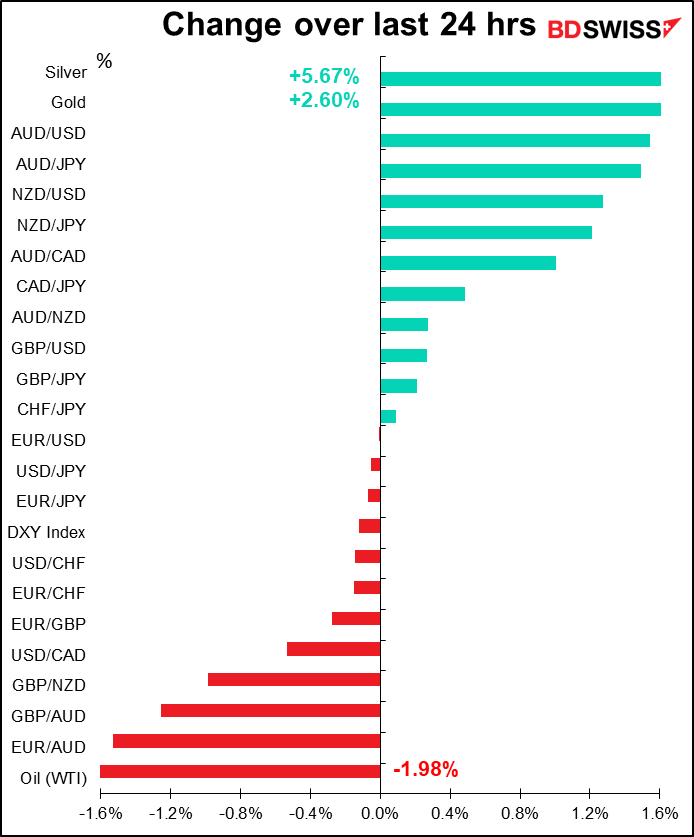