You are at:Home»MARKET PREVIEW»Sentiment Improves on Hopes for Senate agreement, Success of Fed Swaps; PMIs 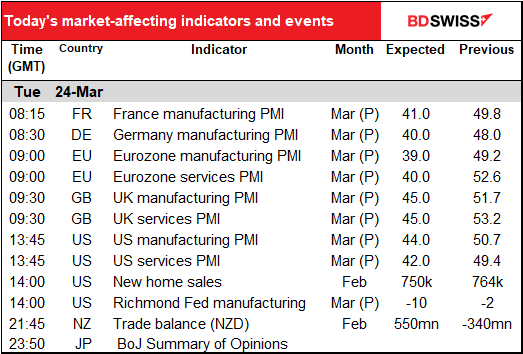 In the FX market, it’s also a traditional “risk on” day, with AUD and NZD soaring and JPY falling. USD is slightly weaker and EUR slightly higher, also the usual for a moderate “risk on” day (a big “risk on” day might see EUR/USD carry trades put on that would push EUR/USD lower).  Even silver and oil rallied. Odd that precious metals now rally on “risk on,” but “risk off” is now associated with total deleveraging and selling everything.

The source of the change of direction is reports that the US Senate is close to agreeing on a $2tn rescue package for the US economy. I haven’t seen any of the details of the changes in the bill, but given that it’s basically written by the Republicans, I’m still worried that it bails out companies, not individuals, and bails them out without requiring sufficient restrictions and payback (such as not using the money to pay out bonuses to executives or buy back stock, for example). So far what I’ve seen of their plan suggests that it would do little to cushion the blow to households and prevent a wave of business failures that would weaken the ability of the economy to recover after this was all over.

The counter-proposal from the Democratic-controlled House of Representatives is much better. First off it’s larger ($2.5tn) and includes payments to everyone who needs it – retirees and the unemployed would get $1.5k, while workers laid off or self-employed persons with no business would get $600 a week. The Fed would provide loans to allow borrowers to stop paying their mortgages for up to a year. It would also provide more money for healthcare costs. Loans to energy companies and the loathsome airlines would come with more onerous conditions. These are the kinds of provisions that are necessary to ensure that people can get through this crisis.

This crisis should be treated as a medical emergency, not an economic emergency like in 2008. Like in any medical emergency, people should be able to take sick leave. The government should ensure that companies can keep workers on the payroll while this virus dies down. This is what they’re doing in Britain, for example, where the government will pay firms 80% of the salary of employees if companies keep them on the payroll. Similarly in Ireland, the government will pay people sick leave even if their companies don’t. That would keep the economic structure intact, just “hibernating” if you will, so that the economy can come back to life once everything is under control (as is starting to happen in China and South Korea).

The risk of a laissez faire response is that companies go bust and even after things are back to normal (if they ever are), thousands of businesses and millions of jobs will have disappeared permanently. It remains to be seen whether the US plan is up to the task, or whether it’s just another bail-out for companies that leaves workers twisting in the wind (e.g. by allowing many exemptions from the requirement to offer sick leave, as was the case last time I saw any details). 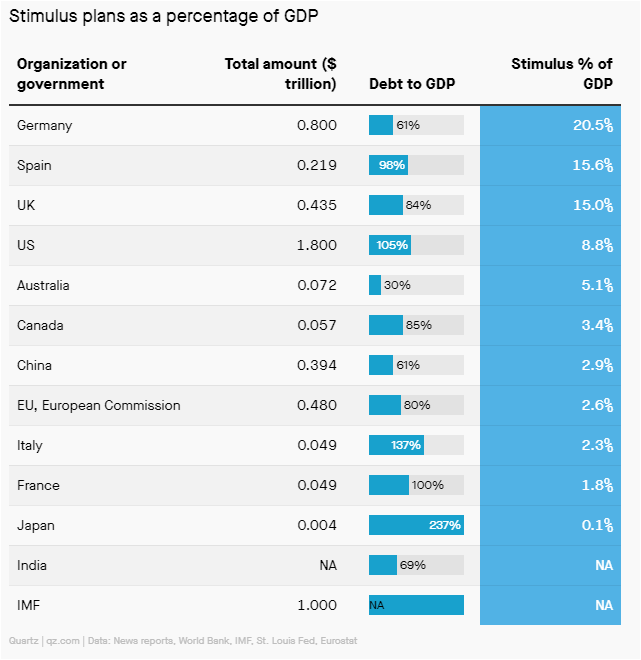 We may also be seeing the beginning of the impact of the Fed and other central banks’ actions in the market. For example, the Bank of Japan allocated almost $35bn to banks in a new daily seven-day swap auction, following last week’s $32bn in other auctions. This has alleviated a lot of the immediate funding pressure in USD/JPY, as shown by the narrowing of the short-term currency basis swap to narrow. 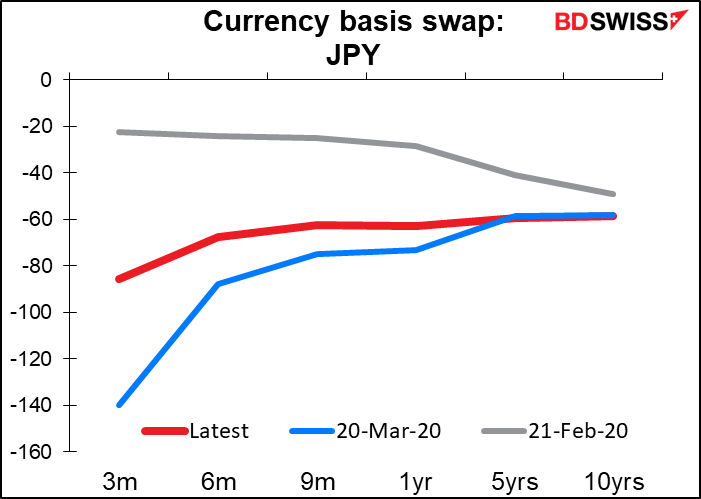 The ECB and Bank of England’s daily dollar swap auctions are also attracting few if any bidders and allocating only a few million dollars, vs several billion in previous weeks. That also suggests reduced funding pressures.

This morning we get the preliminary purchasing managers’ indices (PMIs) for the major industrial countries. This is the day that the data starts to catch up with reality.

There are market estimates, which I’ve given in the table above, but these are only guesses. Who knows if they’ll be even close? For the Caixin/Markit China manufacturing PMI, the market consensus was 46.0 vs 51.1 previously, and the actual was 40.3. For services it was even worse: 48.0 expected, 26.5 actual (51.8 previous). 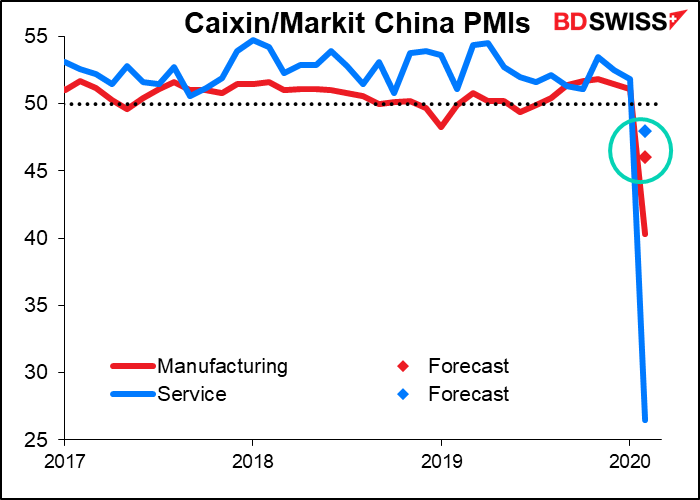 We got the first of the PMIs overnight, from Japan. They were terrible, of course, particularly the service sector index, which reflects activities like restaurants and cinemas, places that the public gathers together. Japan hasn’t had a country-wide lockdown (except for closing schools) and indeed the government has remained remarkably sanguine about the whole problem, probably in a (futile) effort to ensure that they can hold the Olympics on schedule this summer (answer: they can’t). The manufacturing PMI was bad at 44.8, but it was nothing like in January 2009, when it hit 29.6. Given Japan’s lack of compulsory isolation, I think we can expect even worse results from other nation’s service-sector PMIs (see below).

(N.B.: there were no forecasts for the Japan PMIs, as usual.) 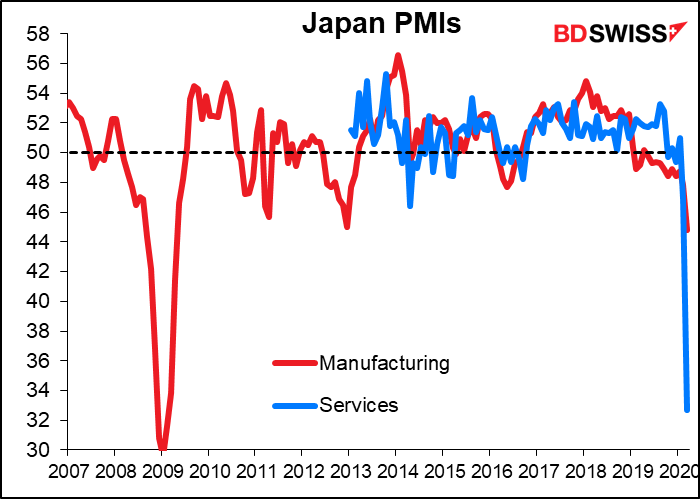 The results of the Australia PMIs were similar:  the manufacturing PMI was down only a little bit, to 50.1 from 50.2, but the service-sector PMI plunged to 39.8 from 49.0.

Also, note that for the UK and US, the service-sector PMI is expected to be significantly below the manufacturing PMI, as happened in Japan and Australia. Given what we’ve seen from the Open Table survey of restaurant bookings, that seems quite reasonable. 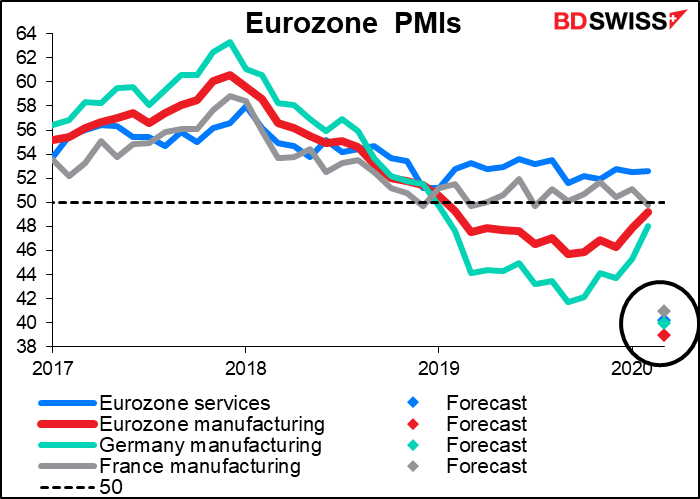 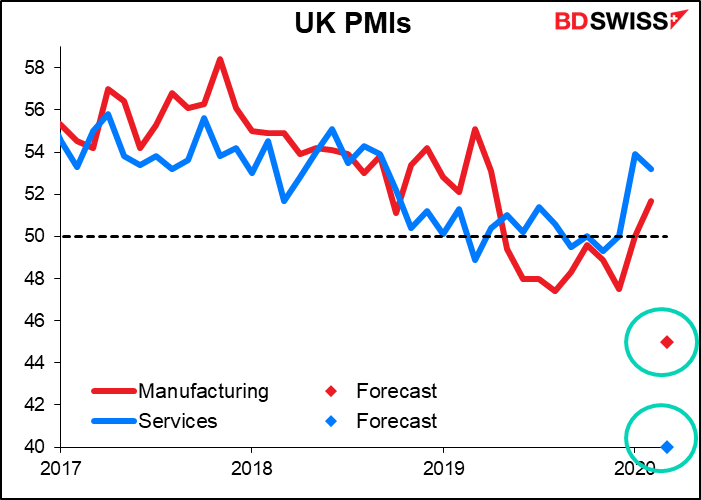 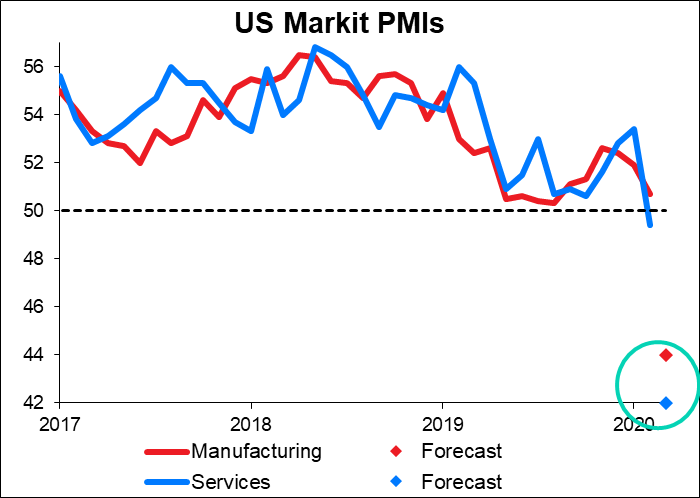 US new home sales in February are expected to be down slightly from January, but that’s not a worry – January was the fastest pace since July 2007. Existing home sales for the month also hit a 13-year high, so it’s clear that the housing market was in robust good shape going into this crisis. But unemployed people tend not to buy houses, so I don’t think the February data is indicative of what the March data is going to look like, much less April. 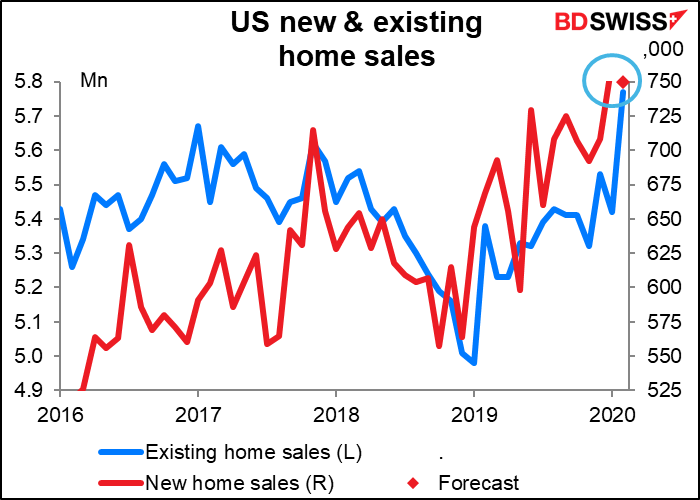 The Richmond Fed survey is expected to be substantially lower. Frankly, looking at the average of the Philadelphia Fed and Empire State surveys, I’d say the market consensus forecast is rather optimistic. 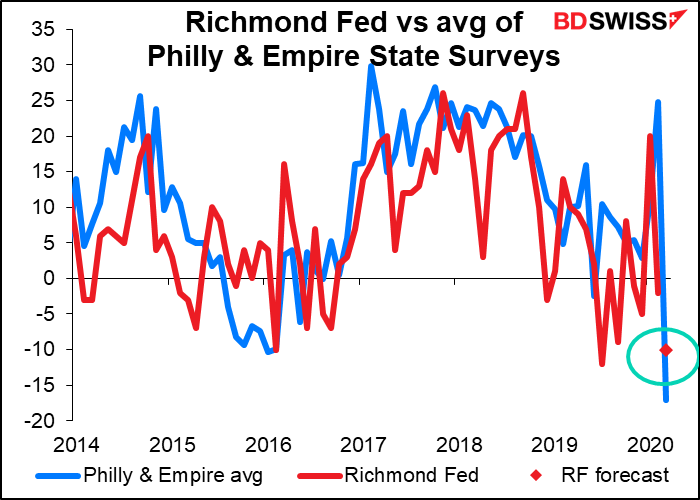 The Richmond survey, while perhaps not as closely watched as the Empire State and the Philly Fed indices (probably just because it comes out later) is actually the most important one, in my view, because it has the best correlation with the closely watched ISM manufacturing PMI. So I suggest that you watch it to get a feel for how the ISM index is likely to come in. 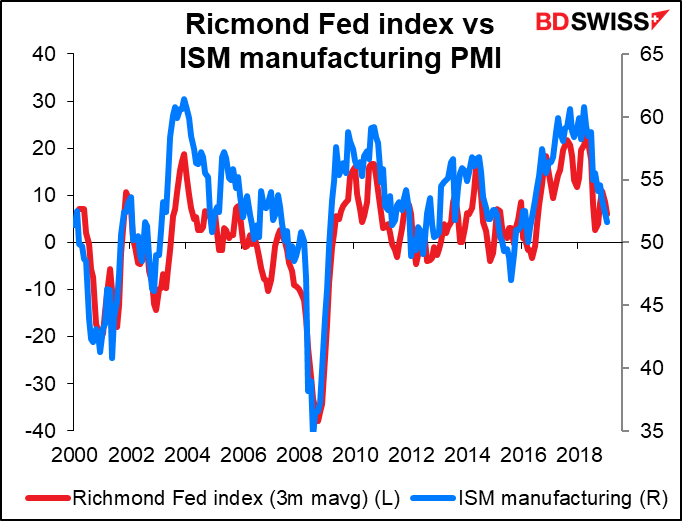 Overnight, New Zealand announces its trade data for February. Trade was expected to have swung back into surplus in this not seasonally adjusted series. On that basis, the 12-month moving average, which is perhaps more informative because of the strong seasonal factors in trade, would continue to narrow. That should be positive for NZD. Will anyone care? I doubt it. 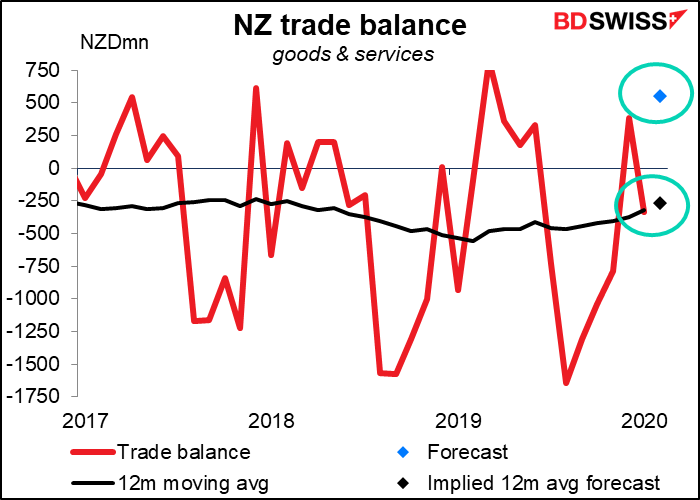 The BoJ Summary of Opinions, which is like a bunch of unattributed haiku about monetary policy, is usually not worth reading, because a) the statements are mostly meaningless, and b) the Policy Board usually does whatever BoJ Gov. Kuroda wants to do anyway. One typical statement from the last meeting:  “Given that quite a long time has passed since the Bank introduced a powerful monetary easing policy, it is becoming more important to continuously make efforts to enhance the sustainability of the policy while weighing up the cumulative effects and side effects.” Can you imagine that in response, another member of the Board jumps up, shakes his (yes, there’s a 8-out-of-9 chance that it’s a “he”) finger, and shouts “No, it’s not important at all to enhance the policy! And we should ignore all the effects and side effects!” Highly doubtful. In that case, the statement itself is hardly worth noting.

This time however the Board did make some changes in policy (e.g. doubling their ETF purchase, increasing dollar provisions, and introducing a new operation to provide loans against corporate debt), and perhaps more important, they did not make one change:  they didn’t lower rates. It will be interesting to learn more about the reasoning behind their decisions. 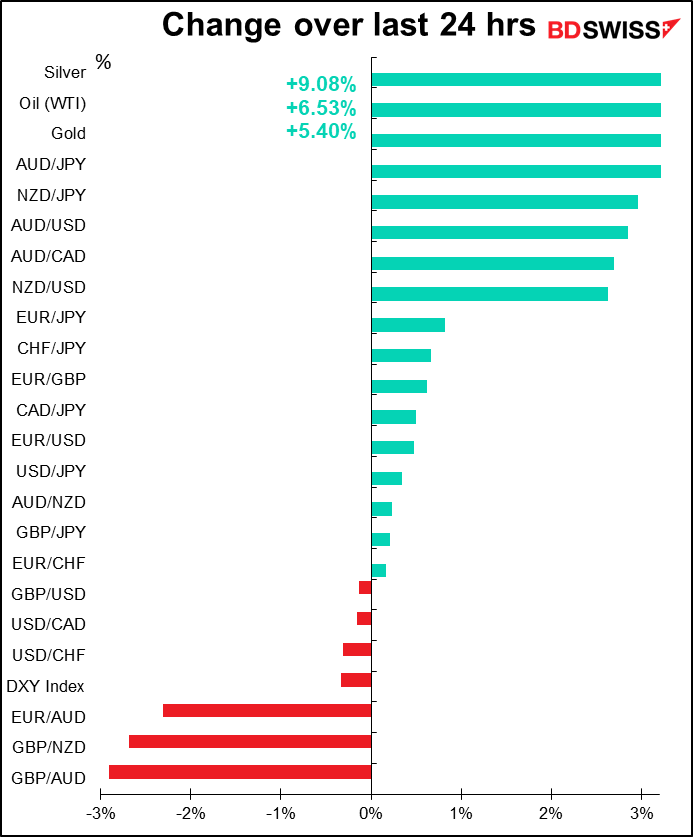