You are at:Home»MARKET PREVIEW»Safe havens Up, EUR Down on ECB confusion; Preliminary PMIs 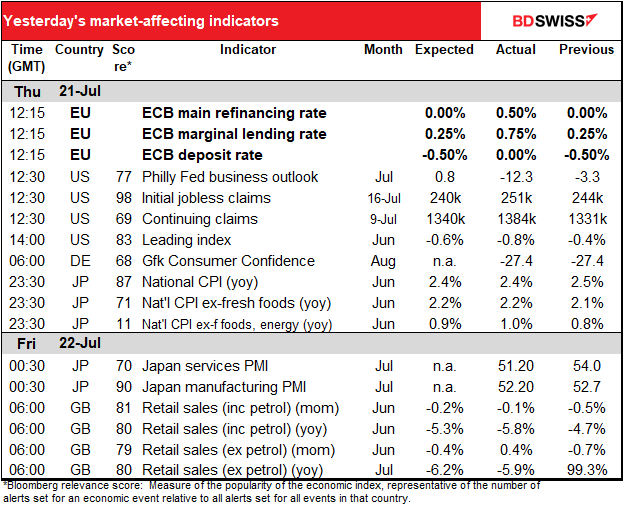 A confusing day! European stock markets were mixed, US stocks higher, and Asian stock markets mixed today too – none up too much, none down too much. Yet the FX market showed a distinctly “risk-off” pattern more consistent with a deep rout in equities. The safe-haven JPY, CHF, and USD were the top-performing currencies and the commodity currencies were at the bottom, with one exception: in last place was EUR following the European Central Bank (ECB)’s decision to hike rates by twice what the market expected (50 bps instead of 25 bps). Go figure! 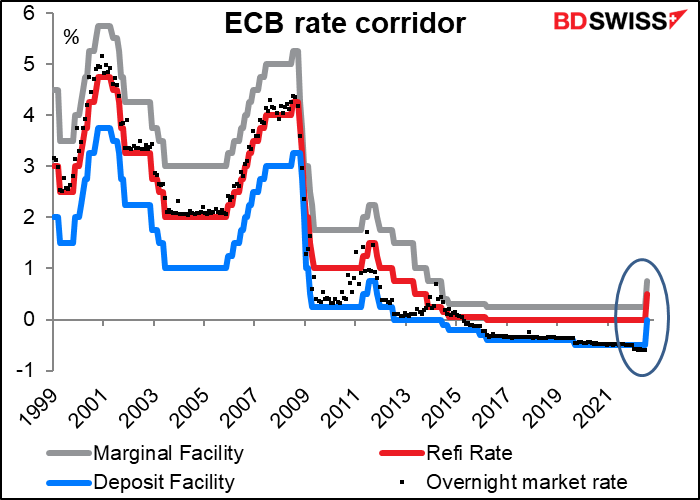 The Governing Council also announced an addition to its ever-growing portfolio of acronyms: the Transmission Protection Instrument (TPI). This is the long-awaited “anti-fragmentation tool.” It will allow the Eurosystem “to make secondary market purchases of securities issued in jurisdictions experiencing a deterioration in financing conditions not warranted by country-specific fundamentals.” The TPI “can be activated to counter unwarranted, disorderly market dynamics that pose a serious threat to the transmission of monetary policy across the euro area.” In order to determine whether it can use the TPI, the Governing Council will consider a list of criteria that include:

The difficulty of Italy reaching these noble goals, particularly after PM Draghi resigned, triggering new elections, caused the spread between Italian and German bonds to leap. The spread on 10-year bonds jumped by 19 bps, the biggest one-day increase since the pandemic. 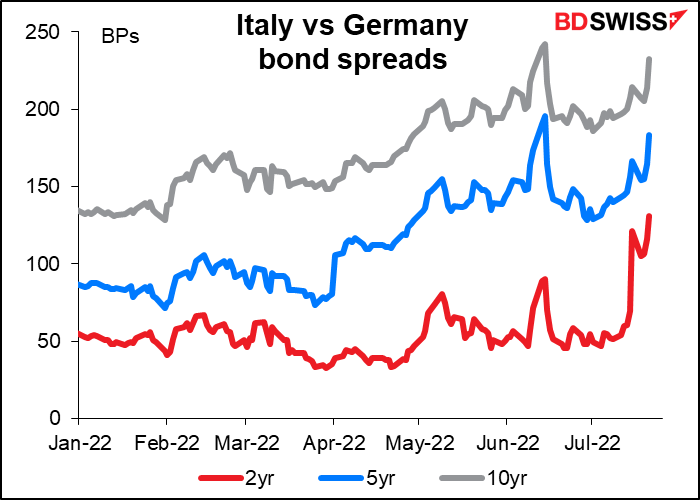 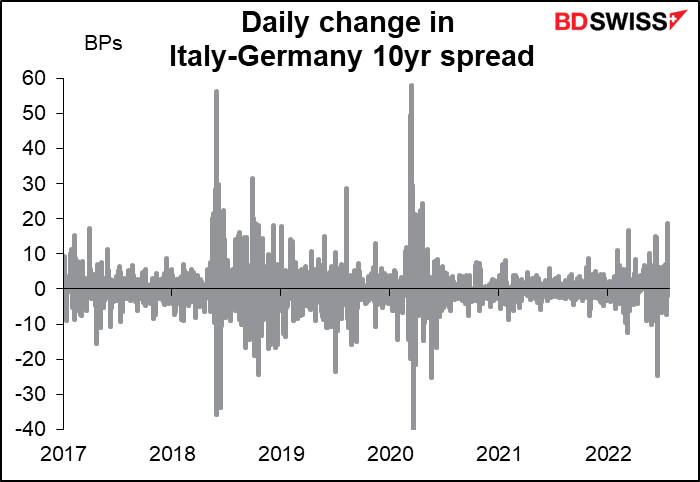 The Governing Council said its decision to hike by 50 bps rather than the 25 bps it had said it would “is based on the Governing Council’s updated assessment of inflation risks and the reinforced support provided by the TPI for the effective transmission of monetary policy.”

This new forward guidance abandoned the relatively clear message from the June meeting, which was that they would hike 25 bps in September unless “the medium-term inflation outlook persists or deteriorates” and then subsequently they would embark on “a gradual but sustained path of further increases in interest rates” (which everyone assumed meant 25 bps per meeting).

ECB President Lagarde said in the press conference that front-loading hikes means that the terminal rate will remain unchanged, just the path to that rate will change. However the market increased its estimate: it now expects ECB rates to peak at 1.79% in May of next year, up from 1.56% on Wednesday.

EUR/USD gained when the ECB’s initial announcement came out as market participants were impressed with the higher-than-expected rate hike and the unlimited anti-fragmentation tool, but then totally reversed during the press conference on Lagarde’s comments about the terminal rate being unchanged and the lack of any firm forward guidance. In addition, the tough criteria for the TPI mean it’s unlikely to rescue Italy any time before the elections, which are scheduled for Sep. 25th.

Meanwhile, there was plenty of excitement on the other side of the pond too. US initial jobless claims rose 6k (third consecutive weekly rise) instead of falling 4k as expected while the Philadelphia Fed manufacturing index was a disaster, falling 9 points further into negative territory instead of rising 4.1 points back into positive territory as expected. It’s now back to its lowest level since May 2020, which was a month after the pandemic hit – not a happy time in America.

While jobless claims remain at historically low levels, signifying a tight labor market, the upward trend indicates that the tight labor market may be easing as the Fed tightens policy and the US economy slows (as the Philly Fed index indicates). There have been reports from several major companies, such as tech giants Alphabet and Microsoft, that they are planning to slow or even freeze hiring. 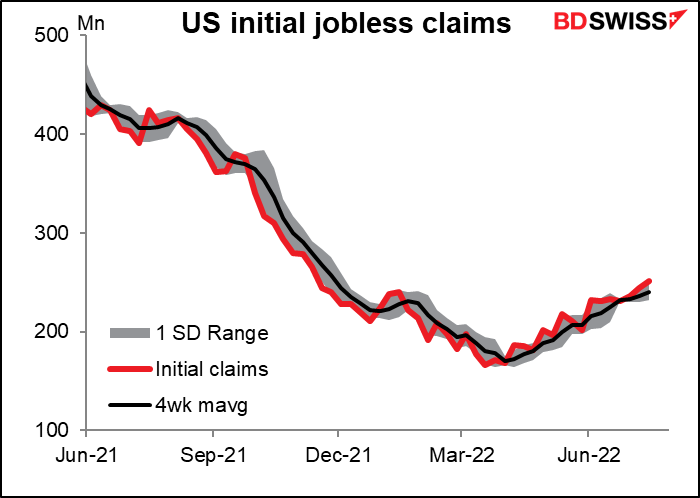 The Philly Fed index indicated a slowing US economy, with the sub-indices for new orders, employment, average workweek, delivery times, and inventories all falling. Inflationary pressures seem to be falling too: the prices paid and prices received indexes also fell. Someone took the data very seriously and made a huge bet on the Fed pivoting, buying the equivalent of $3.6bn in 5-year Treasury notes in one trade in the futures market!

Such thoughts – that the US economy would slow and the Fed would ease off the brakes – helped the S&P 500 to rally 1.0%.

The mixed outlook – higher rates in Europe but bad economic news in the US – caused bond yields to decline in most markets except for Europe. Nonetheless that didn’t provide any support for the beleaguered euro, which seemingly can’t catch a break.

It’s worth noting for a moment that Canadian bond yields and inflation expectations were the biggest decliners yesterday. I’m afraid I don’t have any clear explanation for these moves except perhaps as a continuing reaction to the smaller-than-expected rise in Canadian inflation announced on Wednesday.

Other news: what does my elder daughter living in Japan have in common with US President Biden? They both have COVID-19 (my daughter for the second time). The pandemic isn’t over, folks, even in Japan, where people wear masks all the time (even alone in a car or walking in a park – my daughter explains that “it’s a hassle to remove it,” the opposite of the attitude in the West, where people think it’s a hassle to wear it.) Cases – and deaths – are rising globally, although it’s clear that deaths are much lower relative to new cases than they were before. 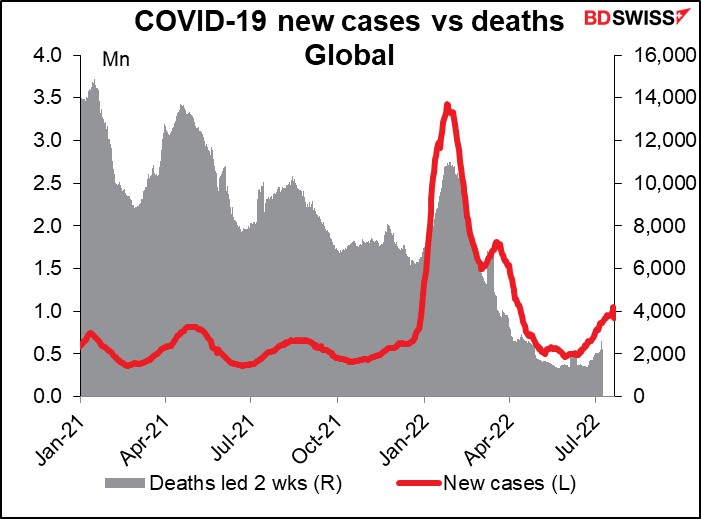 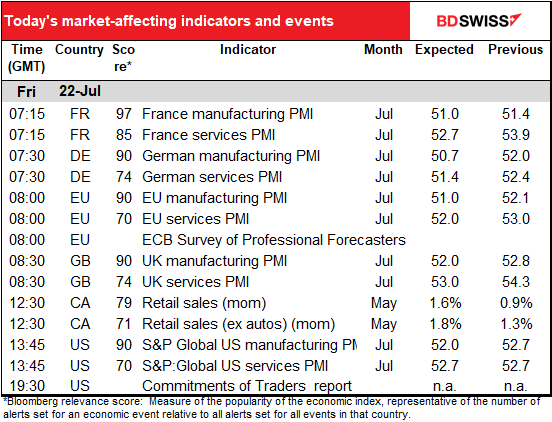 The main event of the day is of course the preliminary purchasing managers’ indices (PMIs) from the major industrial economies. I have them in the table above listed by country in the order in which they’re coming out, but I find it more useful to list them by type (manufacturing, service-sector, and composite).

Net net, the PMIs are expected to decline across the board. That would add weight to the fear that the global economy is slipping into recession. Not yet as the PMIs are still above the 50  line that signals expansion, but they’re getting close. Once they slip beneath the line. 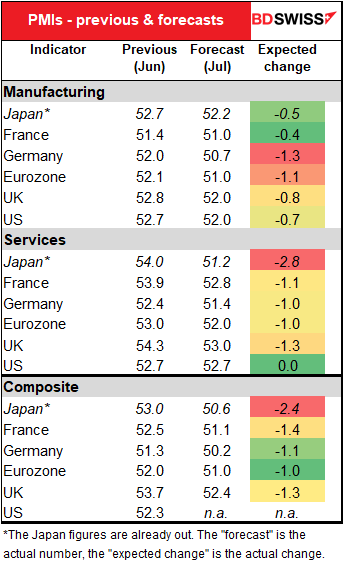 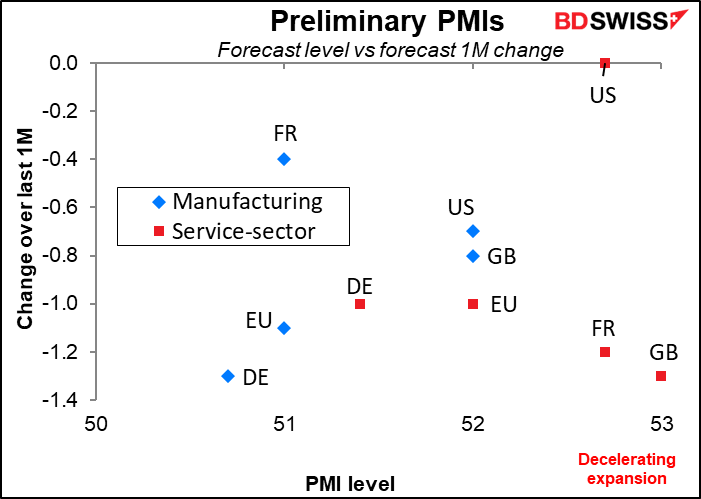 The weaker PMIs don’t necessarily mean a weaker AUD today, but they do suggest that that’s likely to be the trend. 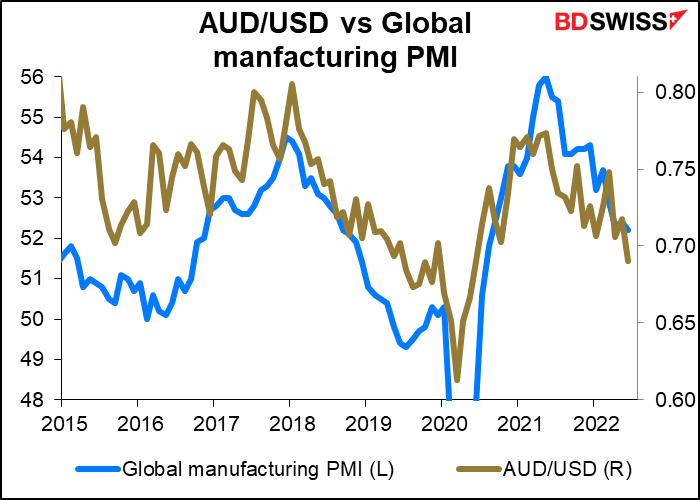 Aside from that, it’s the Canadian retail sales, which probably won’t keep many FX traders in Asia and Europe glued to their screens on a Friday night. This would be the fifth consecutive month of gains and is expected to be higher (+1.7% mom vs +1.2% mom) than the six-month moving average. This would only confirm to the Bank of Canada that “consumption is robust,” as they said in their latest Statement. That could be positive for CAD. 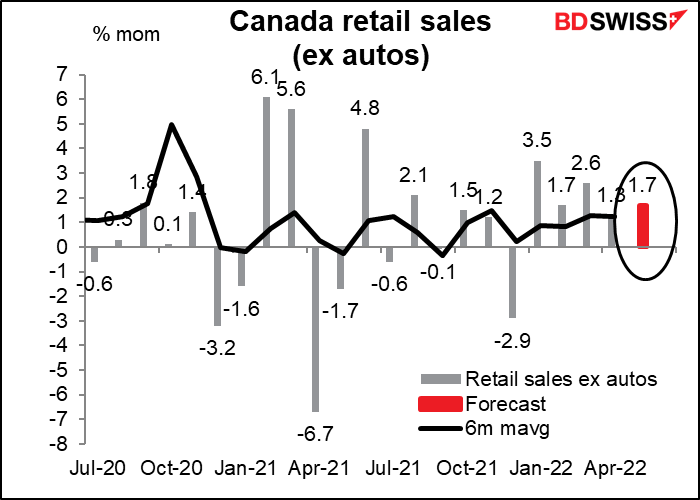 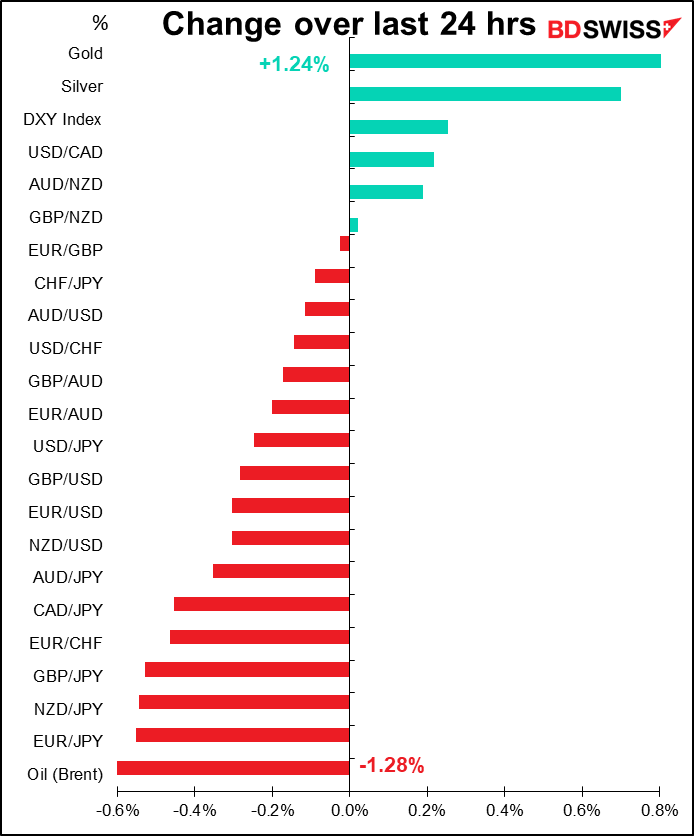 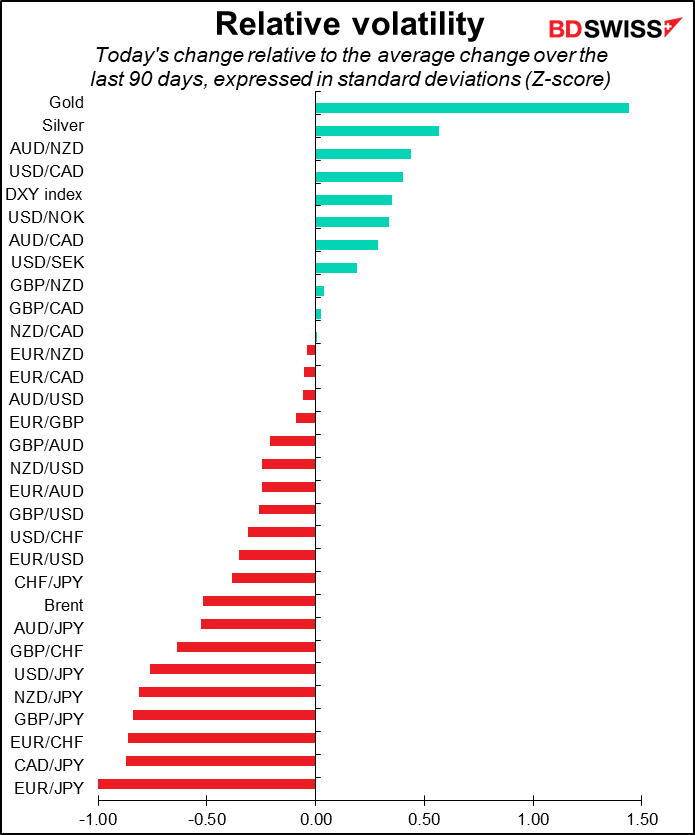