You are at:Home»MARKET PREVIEW»Safe-Havens Up, Commodity Currencies Down despite PMI Beats; Ifo 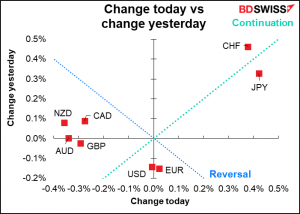 Friday’s preliminary purchasing managers’ indices (PMIs) helped considerably by reducing the risk of the “stag” part. The manufacturing PMIs were mostly above estimates, except for France. The US and UK rose instead of falling as expected.

Services were another story, with Europe showing a disappointing slowdown (except France, oddly enough). But again, the UK rose strongly instead of falling as expected and the US rose much more than expected. It looks like the expansion is continuing in a fairly healthy fashion, at least in the UK and US. That should allow the Bank of England and the Fed to go ahead and withdraw some of their monetary stimulus. Nonetheless, looking at the market reaction to the figures, it looks like the recovery is already in the price. 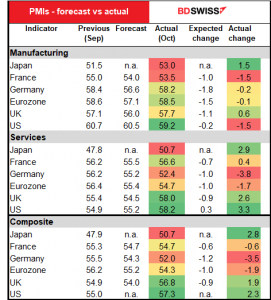 Stock markets reacted the opposite way to what one might’ve expected from looking at the PMIs – European stocks were higher Friday (Euro STOXX 50 +0.80%) while US stocks were lower (S&P 500 -0.11%, NASDAQ -0.82%). FX markets too didn’t react in the way one might expect to stronger-than-expected expansion.

The “risk-off” mood in the FX market is somewhat surprising since the embattled Chinese real estate company Evergrande Friday made the overdue coupon payments on its dollar bonds, thus avoiding default. Nonetheless even though it’s still limping along for now, Chinese construction is likely to be depressed in the coming months, which ought to weigh on demand for many commodities.

Speculators must really hate the yen. They increased their short JPY position by the equivalent of $2.7bn during the week. By comparison, they cut their short CAD position by $1.35bn, flipped their short GBP to slightly long GBP in a -$1.16bn move, and trimmed their short EUR by $905mn and short AUD by $759mn. In total they reduced their long USD position by some $687mn, but this was really several substantial anti-USD moves mostly offset by one big big pro-USD move. 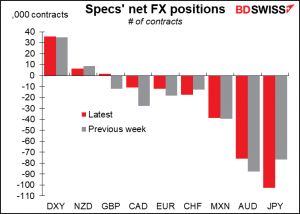 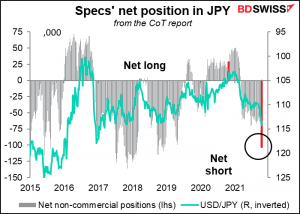 The biggest move among hedge funds on the other hand was trimming their EUR shorts, then trimming their CAD shorts. They too increased their JPY shorts. 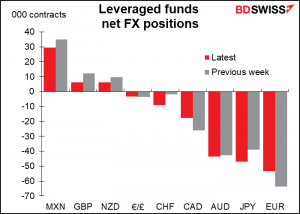 They raised their long gold and silver positions. 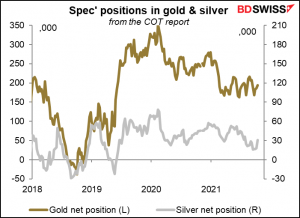 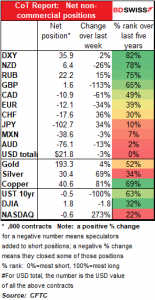 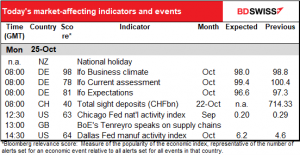 The European day starts out with the Ifo indices, which is somewhat redundant with the Markit purchasing managers’ indices (PMIs), no? But just as the US has the Markit PMIs and the Institute of Supply Management (ISM) versions, so too does Germany have its international & home-grown ones.

The key takeaway from the Ifo in my view is that the “expectations” index is expected to remain below the “current assessment” index for the third month in a row. That means things are expected to get worse — not what we want to hear. 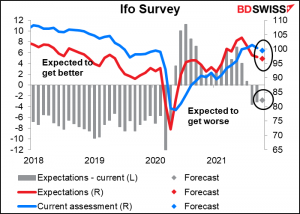 Friday’s preliminary German PMIs were much worse than expected, both manufacturing and service-sector. Against that background, the modest declines expected for the Ifo indices seem to be to be rather optimistic. In any case, the worse-than-expected EU PMIs didn’t seem to hurt the euro on Friday, so probably a miss on the Ifo indices wouldn’t push the currency lower either. 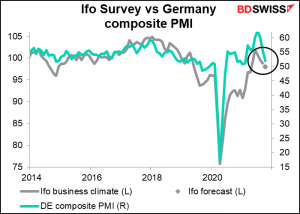 Then onto the quiescent Swiss sight deposits. Shock horror chaos! Deposits actually rose in the latest week! This follows six weeks of declines. Is the Swiss National Bank (SNB) getting ready to cry “Havoc!” and let slip the dogs of currency war? And if so, what would those dogs be, anyway? Probably in the case of the SNB, an Appenzeller Sennenhunde. Any other ideas, please DM me. 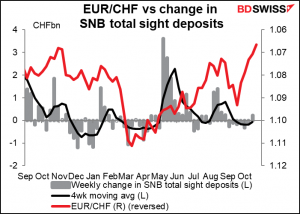 And that’s about it. When the US starts up, we get the Chicago Fed National Activity Index (CFNAI). It’s different from the other regional Fed indices. It’s designed to gauge overall economic activity and related inflationary pressure on a national basis, not regional. A positive index reading corresponds to growth above trend and a negative index reading corresponds to growth below trend. It’s difficult to interpret any one number, because the figures are so volatile, also it’s a month behind other indicators, so the market doesn’t pay that much attention to it.

Similarly, the Dallas Fed manufacturing index is also coming out and may be on some other calendars, but it doesn’t seem to be very closely watched by the markets, perhaps because the region is heavily dependent on one industry (oil) and so isn’t representative of the country as a whole. 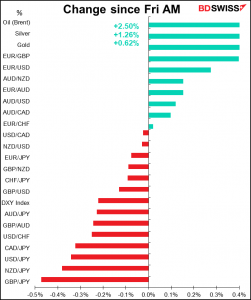