You are at:Home»MARKET PREVIEW»“Risk on” Sentiment as US Proposes More Aid, Discusses Ending Lockdown; OPEC+ Talks, US Jobless Claims 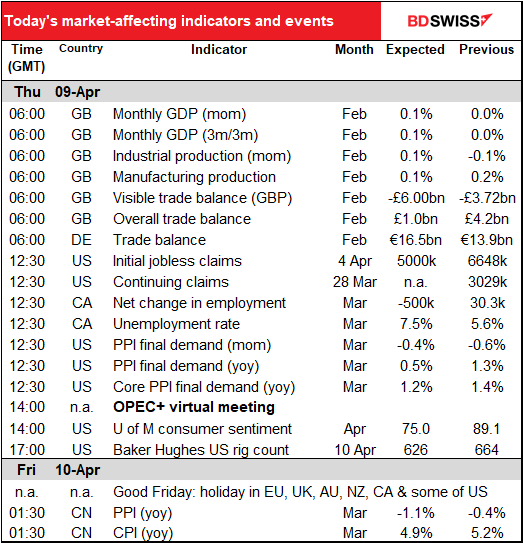 Another “risk on” day with US stocks closing up 3.4% and most Asian markets higher this morning. US investors were encouraged by talk of another round of aid to small businesses (in the range of $250bn-500bn). Also there were reports that Drs. Brix and Fauci, the medical experts who have been coordinating the virus task force, are working with the administration on plans to reopen the economy.

US Investors were also encouraged by news that Senator Bernie Sanders dropped out of the US presidential race, leaving former Vice President Joe Biden as the presumptive Democratic Party candidate. Not only was Sanders seen as hostile to markets, but also Biden is seen as a much better candidate to defeat Trump – and Democratic presidents have historically been better for the stock market than supposedly business-friendly Republicans. 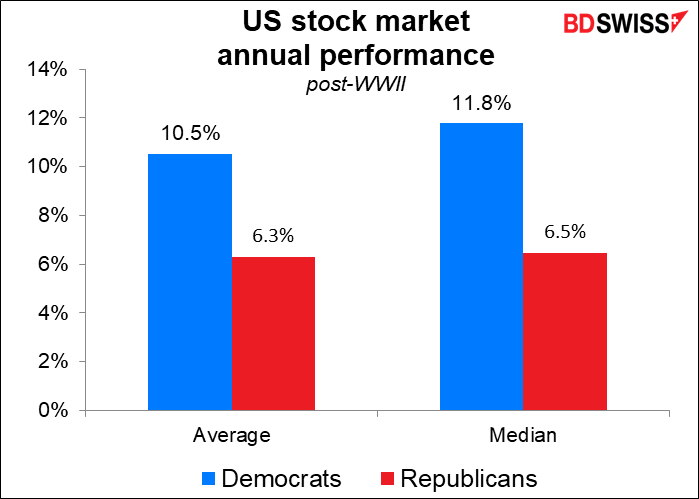 The S&P 500 is now in what’s considered bull market territory, believe it or not – up 23% from its recent lows while US deaths are nowhere near peaking.

The FX market reacted to the outlook as one might expect, with the “risk barometer” pair AUD/JPY being the best-performing currency pair. The other commodity currencies, NZD and CAD, also gained, although it was noticeable to me how little CAD gained even as oil rose further. That may be because of hesitation in front of today’s Canadian employment data, which is expected to show a stunning jump in the number of unemployed persons (see below).

GBP gained as it appeared that PM Johnson’s condition is stable. However, I remain negative on sterling especially vs EUR. The UK is still battling the virus while in Europe, several smaller countries — Austria, the Czech Republic and Denmark – are already plotting their exit strategies from lockdown. I think their actions are likely to improve sentiment towards EUR as investors realize that the first countries to take steps to deal with the virus will be the first ones to get back to some semblance of normality.

Oil rose further after the Algerian oil minister and OPEC President said the meeting “will undoubtedly be fruitful in achieving the market balance.” The Algerian state news agency said the cuts could be as much as 10mn b/d, which was the number being bantered about recently. Later the Kuwaiti oil minister suggested talks were moving towards 10mn-15mn b/d cuts. The talks will be difficult, but all participants want to avoid another disastrous meeting like the last one, which has seen a 70% drop in prices after they failed to come up with an agreement. Furthermore, since they can’t sell all their oil nowadays, they might as well look good in doing what’s inevitable anyway.  More on the talks below.

Speaking of talks, the Eurogroup of eurozone finance ministers failed to reach agreement yesterday despite talking overnight. They will now continue the talks today with all the EU finance ministers. The sticking point seems to be conditionality for loans from the European Stability Mechanism (ESM), the Eurozone’s bailout fund. The Dutch want to make economic reform a condition for such loans, while the Italians reject the idea. There’s also a gap in views about “coronabonds,” which would be a joint liability of all the Eurozone countries.

This failure to come up with an common plan highlights the structural difficulties in decision making in the EU, which could be a drag on EUR/USD, except that a) it’s well known already, and b) the US is if anything even worse despite being only one country.

The big item during the European day is the OPEC+ virtual meeting. Saudi Arabia is reportedly pushing for a massive 10mn barrel a day (b/d) cut in the group’s overall output, which would be about 25%. The problem is that the Saudis won’t cut unless the Russians do, and the Russians won’t cut unless the Americans do. Russia has said it’s willing to cut 1.6mn b/d from its Q1 production level, which was around 11.3mn b/d, so around a 14% cut.

Canada has said they’re willing to go along, but Canada only pumps around 4mn b/d, so cutting their production by 10% wouldn’t be much. The Russians may be sticking with that old oil market adage, “low prices cure low prices,” i.e. if prices are low for a long time, some producers are likely to stop producing – in this case, the high-cost US shale oil producers with break-evens over $45/bbl.

Tuesday, the US Energy Information Agency (EIA) revised down its forecasts for US production by some 1.8mn b/d, which was the US way of saying “look, we’re going to be producing less, so that’s our contribution.” Russia however rejected this line of reasoning. A Kremlin spokesman said that conflating involuntary declines with actual production cuts “is like comparing length and width.”

The well-respected oil news service Platt’s said that US officials are “exerting strong back-channel pressure on the countries to close a deal to stave off further industry bleeding.” While the US doesn’t have that much leverage over Russia – on the contrary, at the moment the leverage seems to go the other way — it does have significant leverage over Saudi Arabia. Furthermore, the oil producers might as well reduce output because they probably can’t sell everything that they’re pumping. Since they have no other choice, they might as well look good doing what’s inevitable anyway.

The decision of the OPEC+ group will go to the G20 energy ministers’ conference call taking place tomorrow.

A decision to cut production by 10mn b/d might shore up prices temporarily, but it’s not enough to balance the market. Estimates are that demand has fallen by 20mn-30mn b/d. For example, US gasoline consumption in the latest week was down 53% from the average for that week of the previous two years — the lowest since 1990 at least (some reports say lowest since 1980, but my data doesn’t go back that far.) Given the current global situation – that no one is moving by automobile or plane — supply cannot possibly fall as quickly as demand. But lower supply can slow the pace at which storage tanks fill up and thereby enable the market to get over this period, assuming of course that global oil demand gets back to normal in a few months. 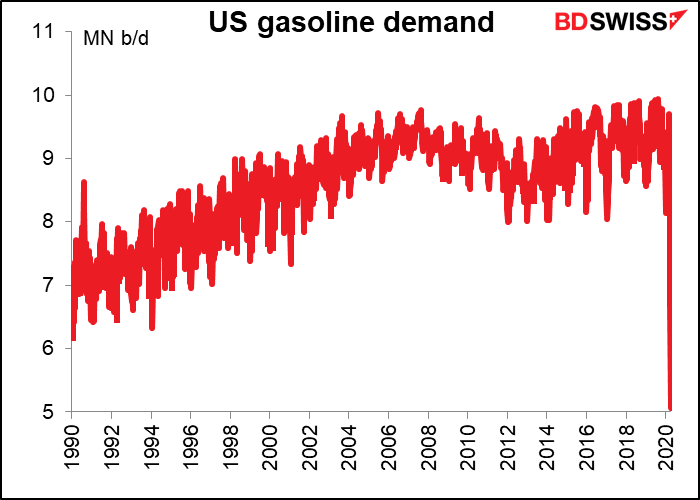 We’ve already had the indicators that are coming out during the European day.

When the US starts up, we get the new star in the indicator firmament, the US initial jobless claims. After a cumulative 10mn newly unemployed person in the last two weeks, you might think there was no one left to be unemployed. Think again! The median market forecast for this week is 5mn, barely any decline from last week’s 6.65mn.

In fact the figures don’t tell the full story by any means. The national figures are assembled from state-level data, but the states can’t keep up with the tsunami of claims. New York Gov. Cuomo said the New York State Labor Department had received 1.2mn calls on one day alone — Monday, 30 March — after getting more than 7mn calls in the previous week. But the state reported just 366,403 the week ended 28 March and 79,999 the week before (NSA). And that’s just one state! The relevant website in Florida crashed. Connecticut said its backlog could take five weeks to process because its computer system is 40 years old – they’re recruiting retirees who know COBOL, a programming language first designed in 1959. Those are just three of the 50 US states — I’m sure there are 47 more stories like that across the country.

I don’t think there’s any point including a graph of the data, given how much greater the numbers are now from anything that’s gone before. I suggest instead you look at the animated graphs by Len Kiefer, Deputy Chief Economist at Freddie Mac. He’s got some really neat graphs of this indicator on his website.

Meanwhile, Canada announces its unemployment data for March. It’s expected to be dreadful. 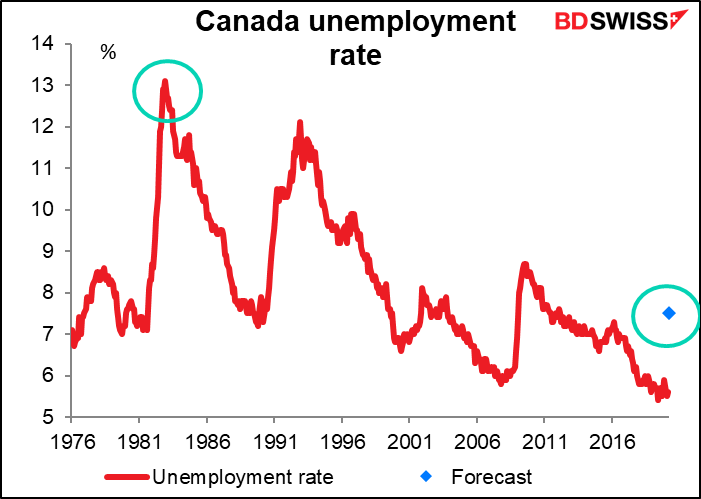 But that’s not the worst of it. The number of jobs is expected to fall an unprecedented 500k. That’s way beyond the previous record fall of 125k in October 2008. Even during the entire 2008/09 Global Financial Crisis, Canada only lost a total of 427k jobs. It’s expected to lose more than that in this one month. 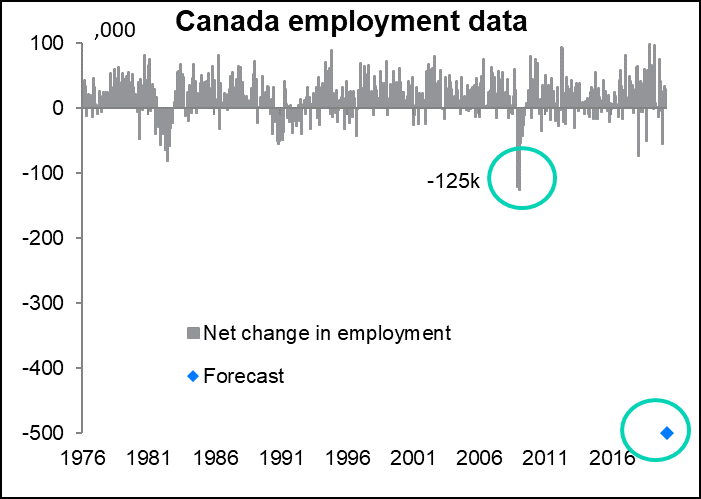 US producer prices are expected to fall from the previous month for the second month in a row. This does happen occasionally – they fell in Nov 2018, Dec 2018 and Jan 2019 – so it’s not unheard of. With oil prices collapsing it’s easy to see why the headline figure should be falling, but core inflation seems to be trending lower too. But what can the Fed do about it? At this point it’s buying about $1mn of securities every minute.

The University of Michigan consumer sentiment index has been plunging and is expected to plunge further. When I wrote my weekly last week, economists were expecting it to fall to 82; now the consensus is 75. That’s the level it was back in 2011-13, when the world was still recovering from the Global Economic Crisis.

Actually that’s not too bad. My personal feeling is that the situation is much worse right now. Then, only the financial system was sick and the jobless level even at its worst was much lower than what we’re going to see next month or the month after. However, it may be that people have more hope about this problem – that they see it as temporary, whereas the GFC looked like a permanent change in the economy. 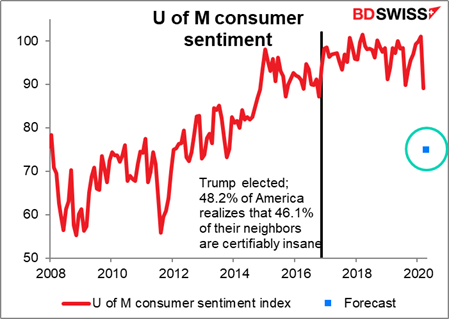 Falling consumer sentiment is nothing unique to the US. The Eurozone, UK and Japan all saw record falls in their consumer confidence in March (data going back to 1985, 1981, 1982, respectively). The Baker Hughes rig count is expected to continue its seemingly inexorable decline. The recent falls are nowhere near a record for this series however. Last week’s drop of 64 oil and gas rigs compares with a record decline of 98 in January 2009, the depths of the Global Financial Crisis, while last week’s decline of 62 oil rigs alone compares with a record fall of 94 in January 2015, when US oil inventories were rising alarmingly. Overnight it’s a holiday in Australia and New Zealand but not most other Asian countries. 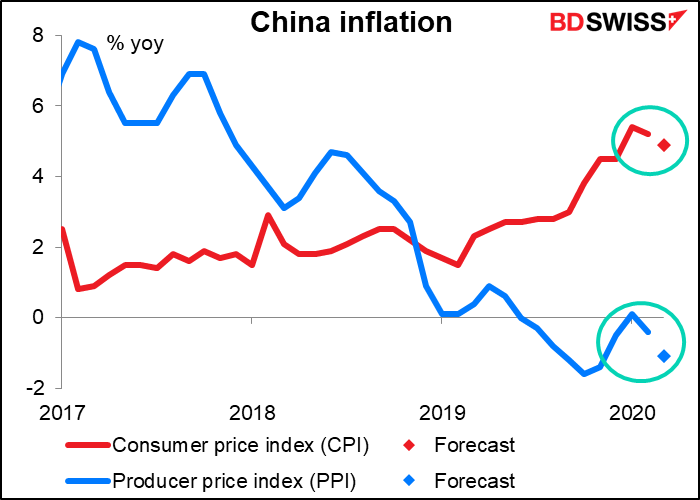