You are at:Home»MARKET PREVIEW»“Risk-On” Mood continues on Biden Infrastructure Deal; US PCE deflators

I’ve found this new graph to be useful in understanding what went on overnight. Today for example we can discern two different groups of currencies: those that continued in the same direction they were going on Wednesday (AUD, NZD, and USD) and those that reversed (GBPand CAD). 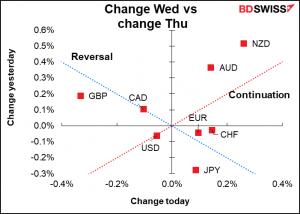 The continued rise of AUD and NZD and the further retreat of USD are easy to explain as a result of continued “risk-on” sentiment arising from President Biden finally reaching a bipartisan deal on infrastructure. The bill includes roughly $579bn in new spending and $1.2tn over the next eight years (including existing programs). Significantly, the bill is not being paid for by tax increases, which adds to the stimulus (they had to assume that the investments would generate greater economic growth to make the numbers work, but that just means it’s deficit spending).

The news pushed both the S&P 500 and NASDAQ indices further into record territory. Europe’s STOXX 600 was also up 0.9% to approach its record high. 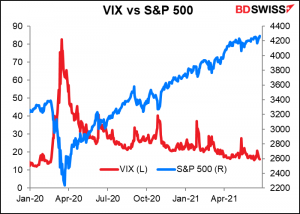 If AUD and NZD continued on, why did CAD retreat so perfectly, especially when oil prices were higher? The two had been traveling together for some time but diverged midday yesterday.

It may have been caused by the modest widening in yield differentials as US bond yields moved up a bit but Canadian bonds remained steady. Note that in contrast, AUD and NZD yields moved up along with USD. 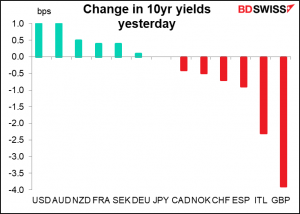 I have to admit, the decline in GBP is a big surprise and disappointment for me. From my point of view, the Bank of England Monetary Policy Committee (MPC) meeting happened pretty much as I expected except for the one thing that matters most: the market reaction.

The statement & minutes noted that growth and employment have been stronger than expected in the May Monetary Policy Review (MPR). The MPC boosted its growth forecast for Q2 to 5.5% qoq from the 4.25% qoq projected in May Inflation also was higher than expected and is likely to go above 3% yoy around the turn of the year. However, the MPC expects this rise to be “transitory” (a frequently recurring word when reading central bank assessments of inflation nowadays) and noted that inflation expectations remain well-anchored. That means there’s no urgent need for action. On the contrary, the rise in COVID-19 cases and the extension of the lockdown was seen as a downside risk, although this wasn’t portrayed as a major obstacle.

With no updated forecasts and the risks from the extended lockdown, this meeting was more of an evaluation meeting than a decision meeting. The MPC noted at the end of the statement that “The Committee will have the opportunity to assess the economic outlook more fully in the context of its August Monetary Policy Report and accompanying economic projections.” In other words, “come back again on Aug. 5th and maybe we’ll have something for you then.” To me that seemed to be holding out the promise of some change in policy or at least some change in forward guidance at the next meeting, assuming that the economy continues to improve. That should’ve been GBP-positive, IMHO.

Nonetheless, the market read the meeting as dovish, as shown by the 4 bps decline in 10-year gilts yields and the all-around fall in GBP.

According to CLS, an interbank FX broker, activity in EUR/GBP was some 411% of normal at 12:00 GMT yesterday.

While the data suggest a more hawkish approach is likely, personnel changes suggest that the MPC as a whole may shift a bit to the dovish side. It was confirmed this week that external member Jonathan Haskel will serve another term, as expected, and that Dr. Catherine Mann will replace Gertjan Vlieghe as an external MPC member. Mann’s research has focused on themes that tend toward deflation, such as globalization and digitalization. She’s indicated she thinks that the current high rate of US inflation is transitory.That puts her largely in line with the majority on the committee, perhaps leaning somewhat dovish, as did Vlieghe. The tilt to the MPC comes with the exit of Chief Economist Andy Haldane, who attended his last MPC meeting yesterday. His replacement hasn’t been announced yet, but whoever it is is unlikely to occupy the position as über-hawk on the Committee. He’s voted three times during the pandemic to cut back the QE program. His departure is likely to leave the MPC missing one extreme. 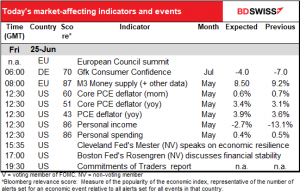 The European Summit continues today. Yesterday’s summit was dominated by Hungary’s drift towards illiberalism (particularly with regards to Budapest’s anti-LGBTI+ legislation) and how the EU should handle its increasingly bitter relations with Russia. Not much for the FX market to worry about.

Gone are the days when the European Central Bank (ECB) based its monetary decisions on the growth (or otherwise) of monetary aggregates. However they are concerned about the pace of bank lending. There’s been a noticeable slowdown in the rate of growth of lending, mostly stemming from non-financial corporations. Financials have also been repaying loans at an increasing pace recently. This slowdown may encourage the ECB to keep policy looser for longer, thereby weakening the euro. 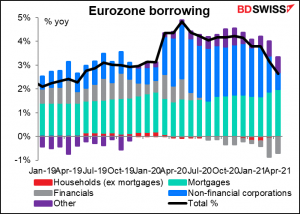 The highlight of the day is the US personal income & spending data, which includes the key personal consumption expenditure (PCE) deflators.

As I mentioned in my Weekly Outlook, since 2000 the Fed has been framing its inflation forecasts in terms of the personal consumption expenditure (PCE) deflators, not the consumer price index (CPI). However, for some reason that I can’t understand, the CPI is still the market’s preferred inflation gauge. The Bloomberg relevance score for the mom change in the CPI is 96.1, meaning about 96% of the people who have any alerts set for US indicators have an alert set for this indicator. By contrast, the highest figure for any of the PCE deflators is 60.1 for the mom change in the core deflator. My guess is that when people think of “inflation,” they think of “CPI,” not “PCE deflator,” which is a more esoteric concept.

If you’re interested in the difference between the two indicators and why you should be following the PCE deflators, I’ve written a “market insight” piece explaining it. (PCE Deflator: the Little Indicator that should be Bigger).

For May, the PCE deflators are expected to rise further above the Fed’s 2% inflation target, although not to the CPI’s 5.0% yoy rate (the PCE deflators are usually less volatile and lower than the CPI). The major reasons for this are the expected lower increase in airfares (which are calculated differently for the PCE deflator than for the CPI) and the lower weight of used cars & trucks, which alone accounted for one-third of the rise in the CPI.

Nonetheless, the market may focus on the expected +0.6% mom rise following the previous month’s +0.7% mom increase. April’s rise was the fastest since October 2001 and has been exceeded only 34 times in the 736 months for which we have data (since January 1960). For the headline figure, it was the fastest rate of mom growth since May 2008. So while much of the apparent increase in inflation is base effects, evidently it’s not entirely base effects.

The forecast rise in the PCE deflators should help to convince the FOMC’s members that the risk of inflation is real and cement the idea of higher US rates to come. This should be positive for USD in today’s environment. 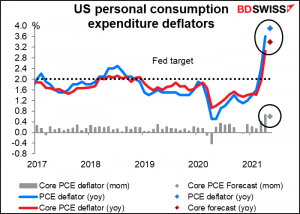 As for the personal income & spending, incomes are expected to be down slightly but spending up slightly. I assume that the estimate of lower incomes stems from the fall in the number of people receiving unemployment benefits. 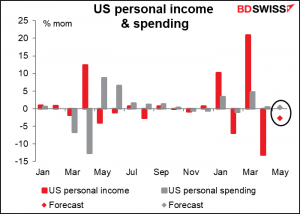 Nonetheless, both incomes and spending remain well above pre-pandemic levels and are continuing to support the economy, indeed support the global economy as imports pour into the US. 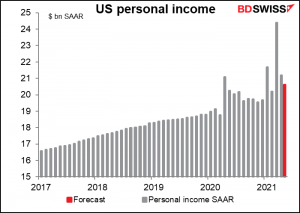 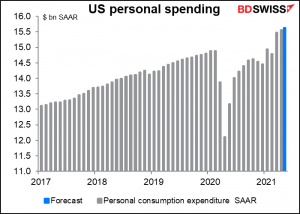 It’s not in the calendar, since I don’t usually mark final figures, but the final data for the U of Michigan consumer sentiment survey is coming out, together with the final version of the inflation expectations indices. These may gather some attention.

As Friday comes to an end in the US…today is the deadline for getting the US report on UFOs! Let’s hope the New York Times was wrong (U.S. Finds No Evidence of Alien Technology in Flying Objects, but Can’t Rule It Out, Either) and it comes with an admission that they found a crashed spaceship with several dead aliens in it. Alas, I fear not.

Finally, there’s the second round of regional French elections on Sunday. These are not particularly important in themselves, but they are a preview of what might happen at next April’s presidential election. Things to watch are the strength of Marine Le Pen’s extreme-right Rassemblement National vs the weakness of President Macron’s La République en Marche. 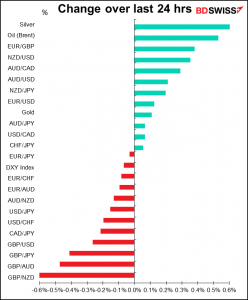