You are at:Home»MARKET PREVIEW»“Risk On” as US Indicators Beat Estimates; ADP Report 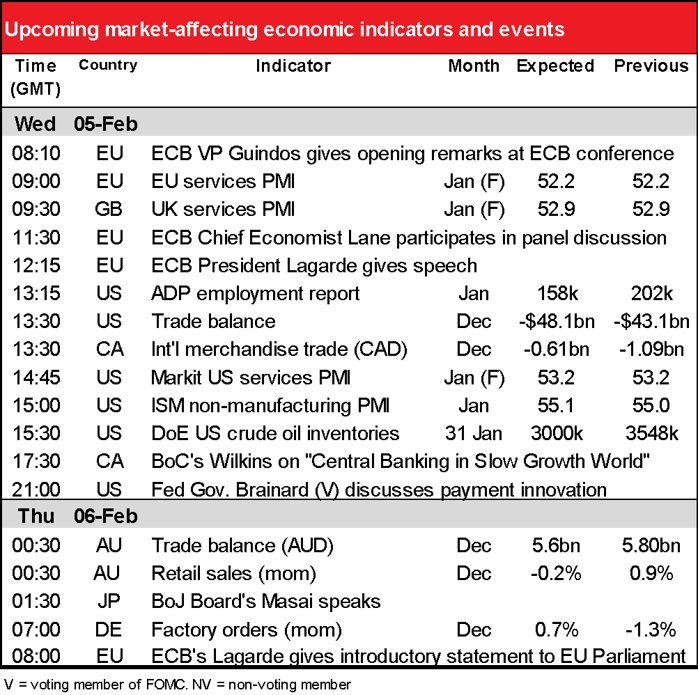 Risk off, risk on – today was risk on. I searched in vain for any particular reason though. It seems to be more of an absence of bad news rather than the release of any good news. Yesterday’s large cash injection by the People’s Bank of China (PBOC) may have helped sentiment. The good data from the US – a much stronger-than-expected ISM index on Monday and factory orders yesterday have improved sentiment towards the US economy. 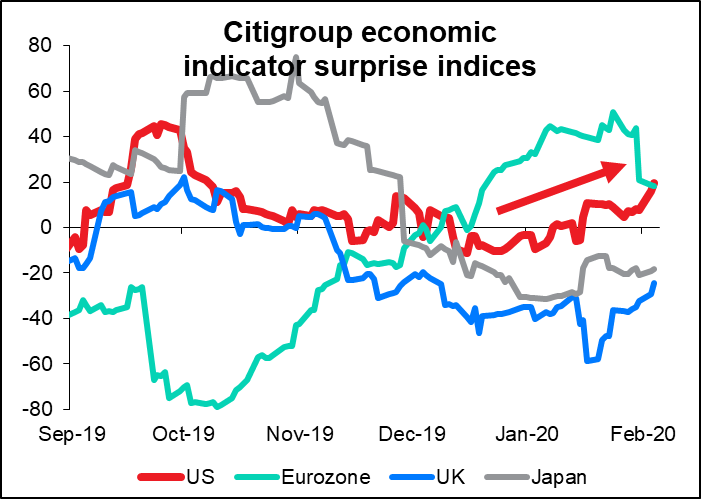 US stocks gained 1.5% and almost all Asian markets are up this morning, too, while bond markets generally sold off. Hence commodity currencies up, JPY and CHF down. Gold down.

The only exception was oil, which was also down too – in theory that should’ve recovered somewhat in a risk-on environment, especially after such a large (21%) decline in about a month. The demand picture looks precarious and there’s some doubt about whether OPEC+ can come through with more output cuts. Nevertheless, oil was recovering this morning – Brent ended at $53.69 yesterday but this morning was trading at $54.58. In any case, oil often doesn’t move with the change in risk (as measured by AUD/JPY) – as the graph shows, while in general oil rises when AUD/JPY rises, the correlation is very low. 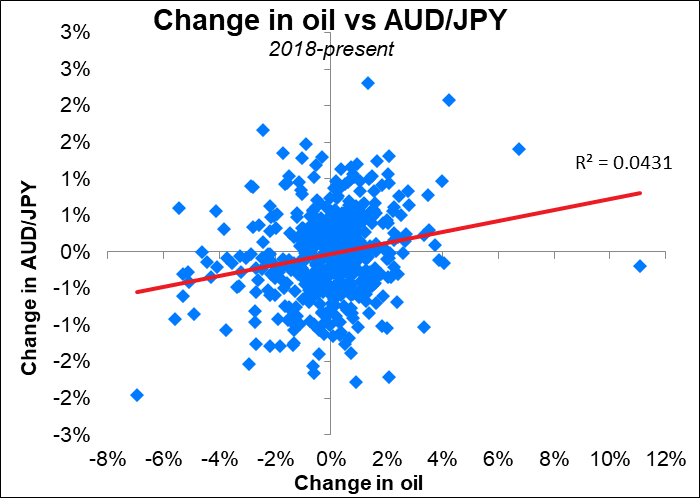 AUD was also bolsted by Reserve Bank of Australia (RBA) Gov. Lowe’s speech, in which he indicated that the RBA would be on hold unless the unemployment rate rises and inflation falls further. “There are risks in having interest rates at very low levels,” he said, such as causing a bubble in housing prices. He also pointed out that although the coronavirus is a “new uncertainty,” the slowdown it’s causing may be only temporary and growth would be likely to bounce back after it’s over. The market immediately downgraded the odds of a rate cut this year, although it’s still seen as likely. Despite all the worries, FX market volatility remains near its record low. Vol was apparently sold across the board yesterday. If the threat of human extinction doesn’t get the market moving, I wonder what can. 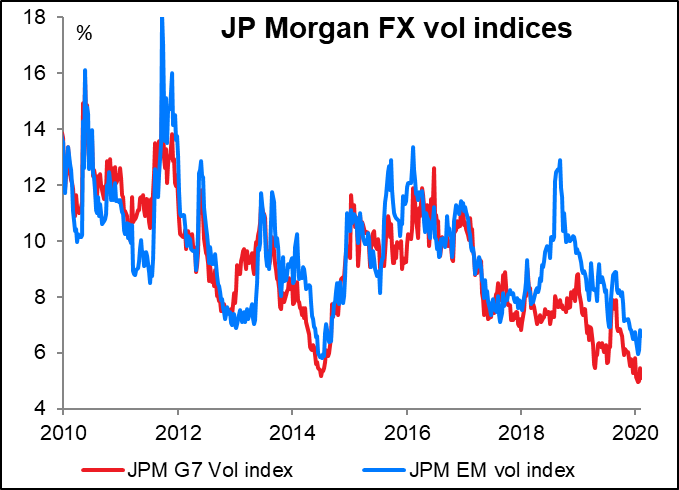 The services PMIs come out today. As usual, the major countries have already announced the preliminary version of theirs, so there are only revisions. This may be important if you’re trading emerging market currencies, where this is some of the best data on the countries, but it’s not that big a deal for the majors at this point.

In that case, you can listen to several ECB speakers say probably not very much. ECB VP de Guindos will give opening remarks at an ECB conference on “Macroprudential stress-testing and financial stability;” ECB Chief Economist Land participates in a panel discussion in Frankfurt on a subject I can’t understand because it’s in German (thank you very much, Bloomberg); and ECB President Lagarde speaks at the “Grand Prize for the economy of  Les Echos for the year 2019” (that one was in French, again thanks much Bloomberg, but I know enough French to be able to figure it out).

Then the 2nd biggest indicator of the week:  the ADP employment report. Automated Data Processing Inc. (ADP) is an outsourcing company that handles about one-fifth of the private payrolls in the US, so its client base is a pretty sizeable sample of the US labor market as a whole. It’s therefore watched closely to get an idea of what Friday’s US nonfarm payrolls figure might be. One point to note:  the ADP adjusts its figures to match the final estimate of NFP, not the initial estimate that we get this Friday. So while it’s one of the best guides to the NFP that we have, it’s not perfect by any means – in fact, neither is the NFP figure itself, since it’s always revised.

Economists are forecasting 158k new jobs, which – surprise surprise – is almost exactly in line with the six-month moving average (151k). The Bloomberg “whisper” figure on the other hand is for a substantially higher 204k. This is a totally unscientific survey of whoever a) has access to a Bloomberg terminal and b) feels like inputting his or her guess for the number. (19 people responded.) However it does give us an idea of what people in the market – who don’t always listen to or believe their economics department – may be thinking. In this case, it suggests that the market reaction to a miss (a lower-than-expected number) may be more serious than the reaction to a beat. 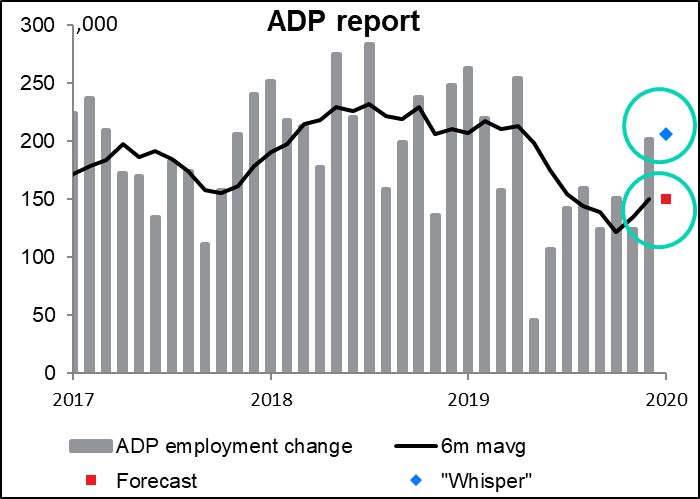 As the graph below shows, the ADP report and the NFP often vary substantially, and not always in the same direction. Over the last six months, the average of the absolute value of the variation has been 47k, which is 29% of the average value of the NFP figure. A forecast error of ±29% isn’t going to get you rich any time soon. Next up is the US trade balance. This is somewhat of an anti-climax as the advance trade balance comes out a week earlier – the difference between the two is that this  version includes services as well as goods, while the advance version only includes goods. This one is more important to the economy – reflects what’s really going on in the balance of payments, not to mention feeding into the GDP report — but less important politically nowadays, as the Very Stable Genius running the US doesn’t seem to understand the concept of “invisible export.” Be that as it may, it’s expected to show a further widening of the trade deficit as the part of the recent decline in imports that was caused by the GM strike unwinds. At the same time though there was also a large drop in consumer goods imports, which may have been related to the China tariffs. Those might not bounce back so quickly, especially if the coronavirus reduces Chinese goods production. USD negative. The Canadian trade figures are expected to show a narrowing in the trade deficit as oil prices rose and shipments picked up. The end of the rail strike may also have helped. Meanwhile, US export figures suggest that Canadian demand for foreign goods might not be that strong. CAD positive 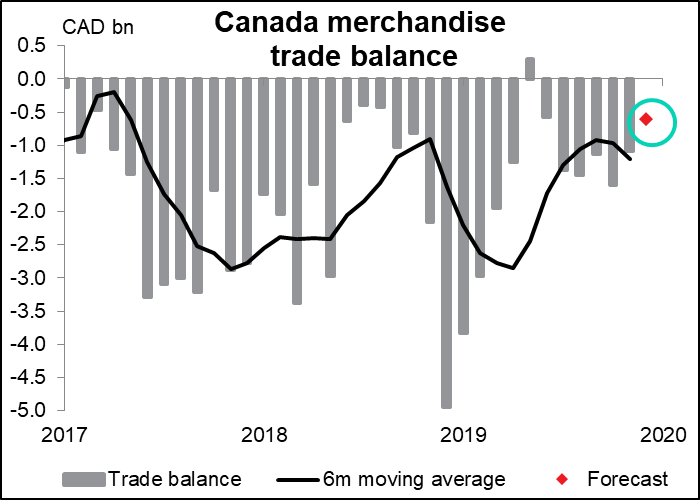 The Institute of Supply Management (ISM)’s non-manufacturing index isn’t as closely watched as the manufacturing index, but people still pay attention to it. It’s expected to be up slightly. This would corroborate Monday’s surprisingly strong ISM manufacturing PMI, which beat expectations substantially – it was supposed to rise to 48.5 from 47.2, but instead leapt up to 50.9, over the crucial 50 “boom or bust” line. It would therefore be positive for the dollar. 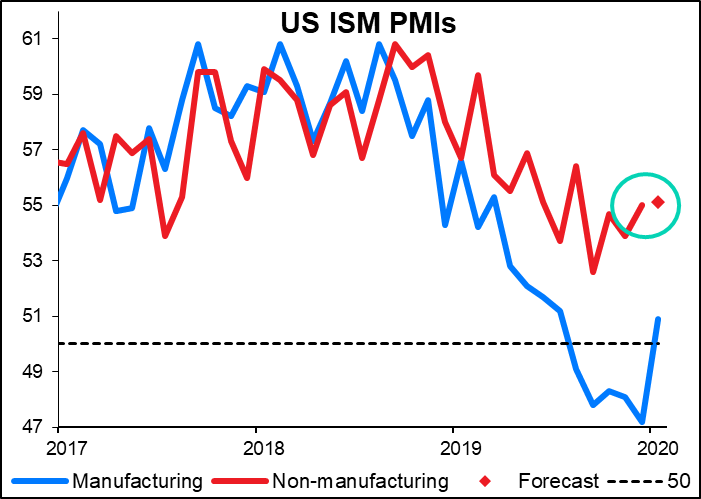 Fed Governor Lael Brainard will discuss payment innovation at a symposium at Stanford University. This sounds like a big snore, but I mention it because she’s been the main Fed spokesperson talking about cryptocurrencies and such, which are often of interest to people who read comments like this. She’s been polite but consistent in explaining why these are a non-starter from the Fed’s point of view. If you want to read the latest thing she wrote, you can see it here:  Update on Digital Currencies, Stablecoins, and the Challenges Ahead. In general, she was pretty negative without dismissing the idea entirely:  “In the United States, there are important advantages associated with current arrangements… Circumstances where the central bank issues digital currency directly to consumer accounts for general-purpose use would raise profound legal, policy, and operational questions…” Etc, etc.

Overnight we get two indicators from Australia:  trade and retail sales.

Australia trade is expected to show another healthy surplus as shipments of various commodities, such as iron ore and LNG, rose near the end of the year. Imports are likely to bounce back after November’s sharp drop, but soft domestic demand suggests that they’re not likely to rebound that strongly. AUD positive 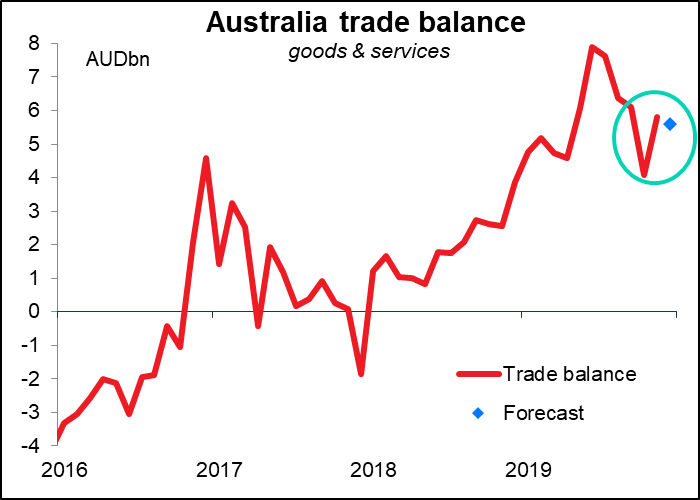 Speaking of soft domestic demand, Australia retail sales are expected to be down on a mom basis following the unusually sharp 0.9% rise in the previous month (the biggest rise in two years). Probably what happened is that the “Black Friday” sales pulled a lot of Christmas shopping into November and the seasonal adjustment process hasn’t yet caught up with the change. Beyond this one month, the outlook for sales isn’t good as the bush fires increase pollution across the country and make shopping a less pleasant experience. AUD negative

Oddly enough, when I plug the consensus forecast change for December into my spreadsheet, it shows the 6m moving average remaining exactly the same. Maybe people are using Excel’s “Goal Seek” function to forecast these indicator? It’s as good a way as any in my view. 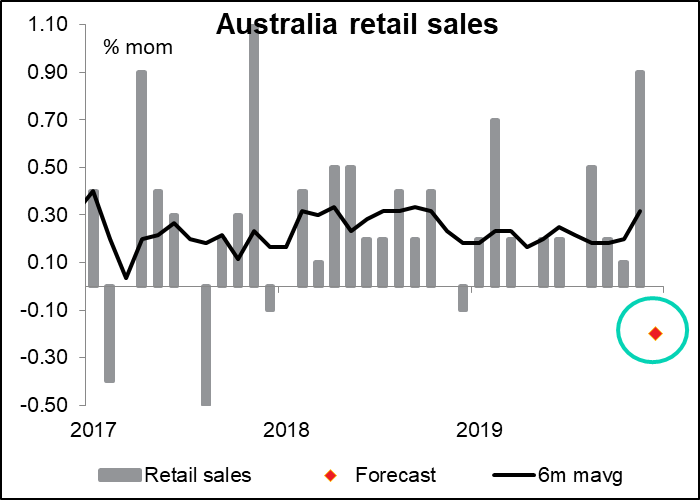 In yesterdays’ comment, I mentioned why we might want to start paying more attention to what Bank of Japan Policy Board members say. Deputy Gov. Wakatabe’s speech yesterday basically proved me wrong. He specifically said that there is no plan to conduct a policy review like what the Fed and ECB are doing and that the majority of the Policy board doesn’t see the need for such a review. He also said the coronavirus is obviously a downside risk, but there was no need to be overly pessimistic about its impact. And no, they’re not going to conduct a stress test on climate risk. In other words, same old same old.

BoJ Gov. Kuroda did say in Parliament that the Bank won’t hesitate to take action to cope with the virus’ economic impact if it becomes necessary, but of course this is a meaningless comment, because if it’s necessary, then by definition they will do it. (See “Gittler Inversion Rule” below)

Let’s see if BoJ Policy Board Member Ms. Masai, the only person on the BoJ board who prefers the pronoun “she,” says anything more interesting today. Her last speech, back in September, contained the meaningless statement, ““I intend to continue to conduct monetary policy appropriately toward achieving the price stability target while considering all conceivable adverse and positive effects from every angle.” Imagine the inverse of that statement:  “I intend to conduct monetary policy inappropriately and not aimed at achieving the price target while considering only a few effects…” Obviously no one in their right mind would say that. If the inverse of the statement is meaningless, then there’s no point in stating it in the positive (this is known as the “Gittler Inversion Rule,” which unfortunately has never gone viral like I had hoped – it does explain a lot of what passes for meaningful comments by the Great and the Good, however).

Then just as the European day gets under way, German factory orders come out. Unlike the US, where factory orders come after durable goods orders and therefore aren’t closely watched, in Germany they precede tomorrow’s industrial production data and are therefore important. They’re expected to be up modestly on a mom basis, but not enough to translate into an improvement on a yoy basis.. I’d say this is a sign of still weak demand that may be negative for the euro. 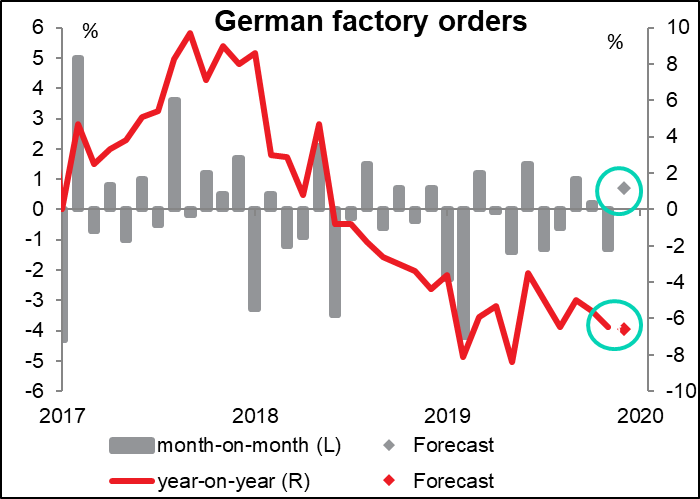 Furthermore, this is December’s data. The market will want to see what happens to orders in February, after the coronavirus arrived. Both export and domestic orders have been falling, but domestic orders have been falling more sharply than export orders. If export orders start collapsing, then Germany may fall into a situation that’s referred to in Germany as gehakte tsuris – real trouble. 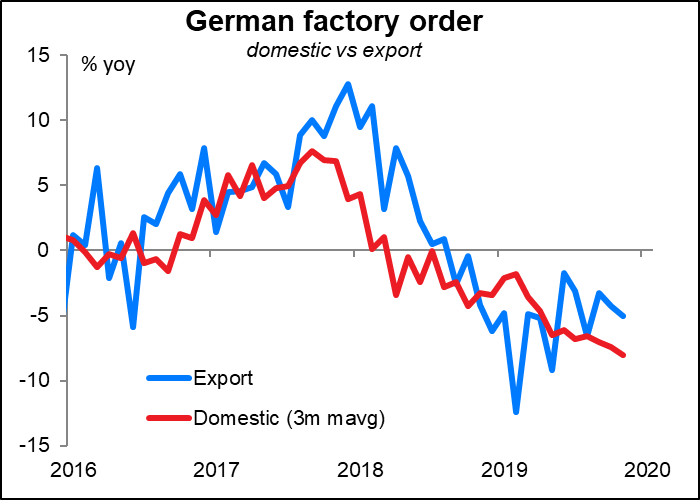 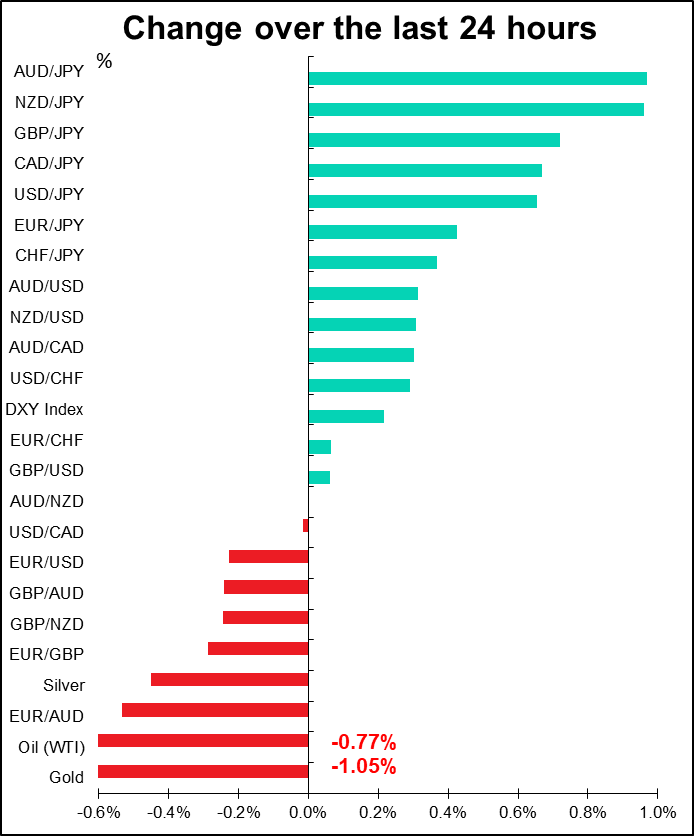