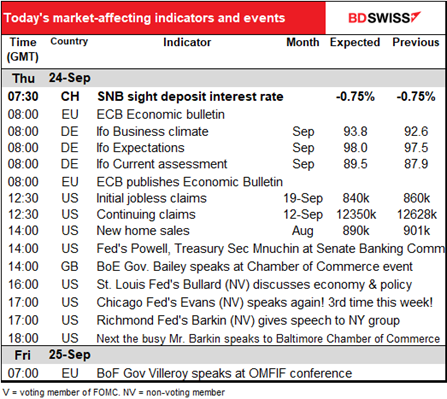 The USD continued to rise, only this time it definitely was in response to a “risk-off” mood. Here we have the same graph as yesterday, only the S&P 500 (red line) is inverted. You can see how the dollar rose as stocks fell. 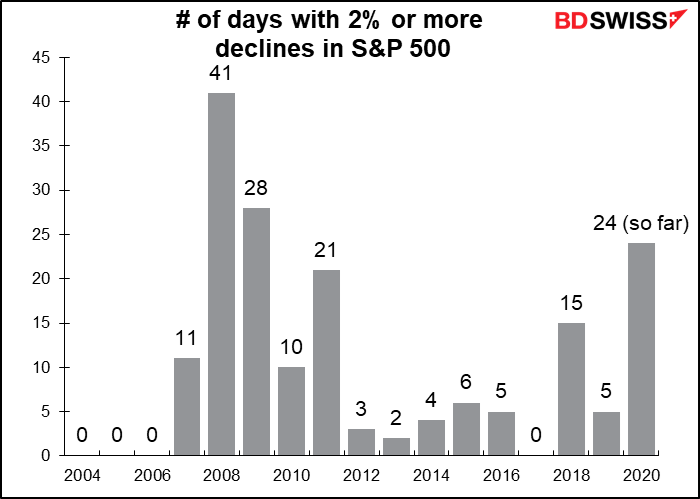 The risk-off mood continues in Asia today, with every Asian market down this morning except Malaysia.

One reason for the decline in stocks may have been the continued pleas by Fed officials for more fiscal stimulus, which seems unlikely to arrive in time. Asked how the Fed could further help Main Street, Powell said the central bank had “done basically all of the things that we can think of” and reiterated that the economy needed fiscal stimulus, a theme reiterated by his colleagues as well. But negotiations in Congress on further aid remain stalled as politicians focus on the elections and the Supreme Court nomination.

The Fed officials’ comments highlight a) the limits of what monetary policy alone can do, and b) the new role of central banks as piggie-banks for governments. This is not confined to the US but rather is a general global phenomenon. Central banks are pleading with governments to “please, please issue more bonds that we can buy.”

One might think that that would be inflationary. However Boston Fed President Rosengren said it would be “lucky” if the US had 2% inflation in four years.

Speaking of inflation, several FOMC members pushed back against Chicago Fed President Evans’ understanding of the new Fed average inflation targeting regime. Fed Vice Chair Clarida said that the FOMC needs to see inflation on track to moderately exceed 2% before changing its stance, thus contradicting Evans’ understanding that the Fed could start normalizing rates even before inflation averages 2%. Fed Chair Powell echoed that idea in his testimony to Congress – he noted that the new policy is aimed at overshooting 2% inflation in order to achieve 2% on average.

But as Rosengren said, and I continue to believe, this is all just theoretical because 2% inflation isn’t on the cards any time soon anyway.

Given the stronger dollar and weaker risk sentiment, it was no surprise that the commodity currencies were hit hard. NZD was the worst-performing currency after Wednesday’s Reserve Bank of New Zealand (RBNZ) meeting. While they didn’t change policy or take any action, they did note “the progress being made on the Bank’s ability to deploy additional monetary instruments,” including “a Funding for Lending Programme (FLP), a negative OCR, and purchases of foreign assets.” The FLP will be ready to launch by the end of this year, before the others are available (the RBNZ has pledged to keep rates unchanged at least until March). A FLP would not only depress NZD interest rates, but also depress the NZD by reducing banks’ need to fund themselves offshore.

Kiwi has lost any semblance of interest-rate support vs USD or AUD, although it still retains a yield pick-up vs JPY.

But despite the risk-off mood, JPY weakened against the stronger dollar. It was little changed vs EUR, indicating that it was more of a USD move than a JPY move. CHF also fell as both hedge funds and retail clients sold the currency.

Precious metals continue to decline. Interesting that gold is falling even as central banks plead for more opportunity to monetize debt. Investors may be coming around to the Fed’s view, that inflation is not likely to rise even with all this debt monetization. Either that or gold has lost its traditional role as a hedge against inflation. The amount of negative-interest bonds outstanding has fallen slightly recently, but the gold price has fallen even more – is there starting to be a disconnect between gold and interest rates?

Silver is getting hit particularly hard. The gold/silver ratio, which hit a 5,000-year high of 124 back in March, hit its low of 69.6 on August 10 and was bouncing around there for some time. Now it’s risen back to 84.5.

We’re waiting for the Swiss National Bank meeting, but don’t expect any major changes – nor even any minor changes, at that.

The Ifo survey is expected to show improvement in both current conditions and expectations. 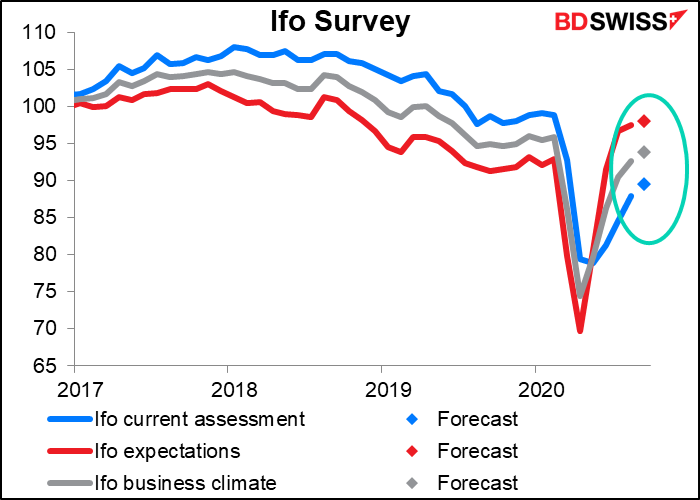 Yesterday’s German purchasing managers’ indices (PMIs) were mixed; manufacturing far exceeded expectations (56.6 vs 52.5 expected, 52.2 previous) but service-sector was a disaster (expected to rise to 52.5 from 52.2, instead it fell to below 50 – 49.1) The result was that the composite index fell to 53.7 from 54.4. Nonetheless, it’s still doing better than the Ifo indices, so I don’t think a rise in these indices will offset the mixed impression given by the PMIs – they Ifo indices are still not back to pre-pandemic levels anyway. 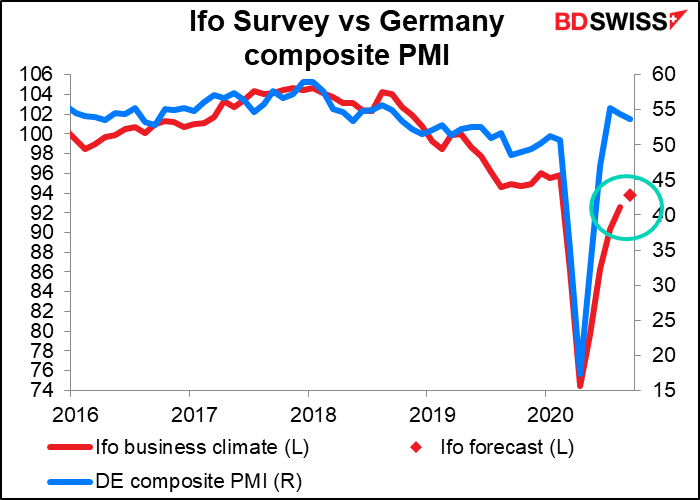 The weekly US jobless claims are expected to be pathetic. The market looks for a miserable 20k decline in initial claims and 353k decline in continuing claims. Even that may be exaggerated – some people are no doubt falling out of the continuing claims data not because they’ve found a job but because they’ve been unemployed for so long they’re no longer eligible for state unemployment benefits. 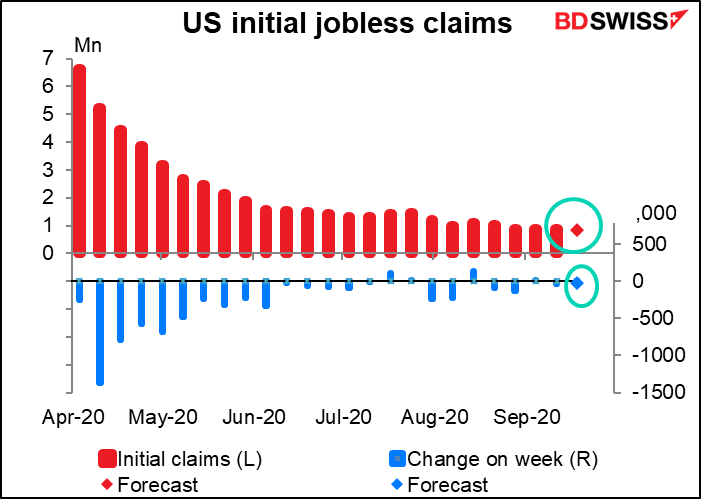 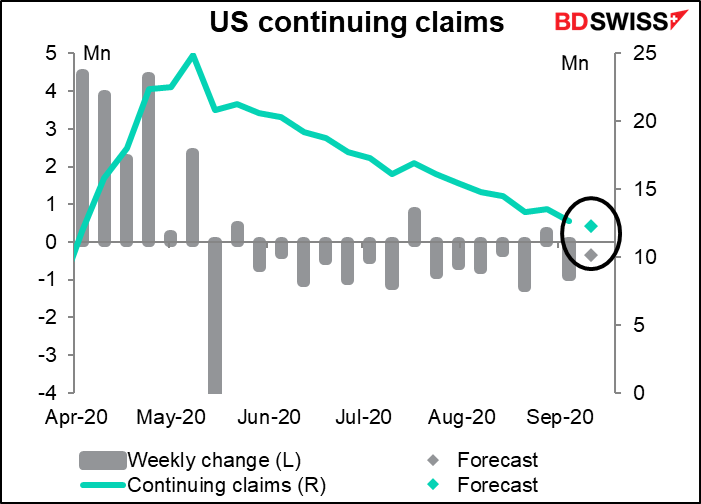 Total unemployment claims, including those for federal programs, rose for a third consecutive week in the week to 28 August. As time goes by, more and more temporary layoffs are becoming permanent. 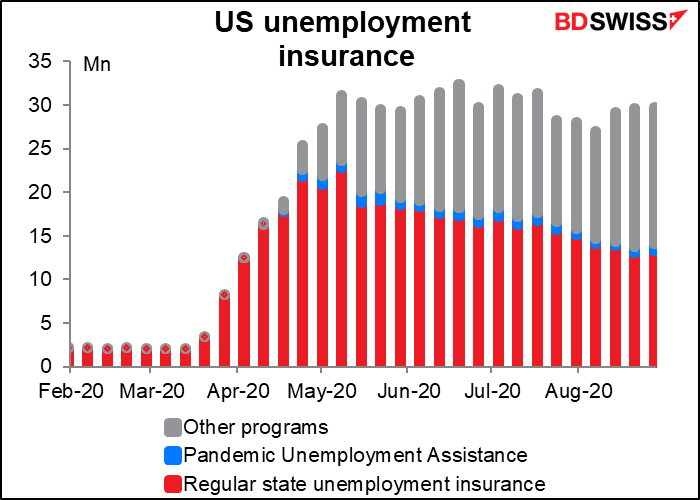 US new home sales are forecast to be down 1.2% mom. Strange, because existing home sales were up 2.4% mom, which by the way was exactly as forecast – quite amazing. 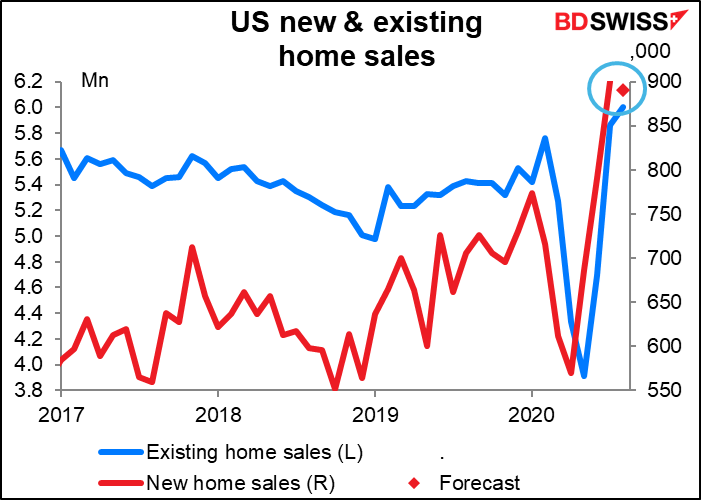 After that it’s mostly chit-chat. Four Fed speakers are up, including Chair Powell, but he didn’t say much that was new on Tuesday and I don’t expect him to say much that’s new today. Maybe Chicago Fed President Evans will clear up what he meant when he said Tuesday the Fed’s new average inflation targeting approach doesn’t preclude tightening before inflation averages 2%.

Bank of England Gov. Bailey clarified the Bank’s stance on negative interest rates on Tuesday and so I don’t expect any more revelations from today’s talk. 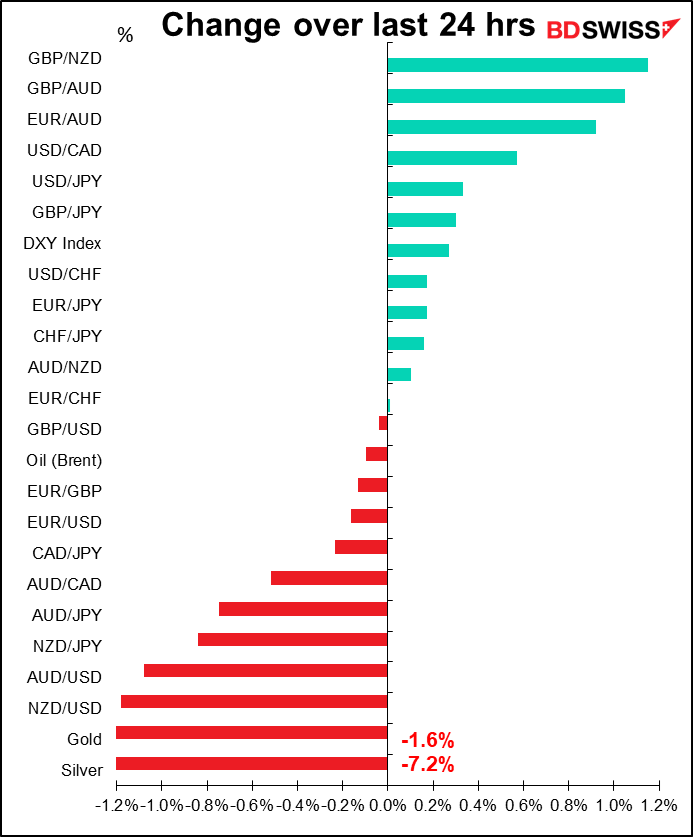