You are at:Home»MARKET PREVIEW»“Risk-off” Mood on Virus Worries; SNB, Bank of England 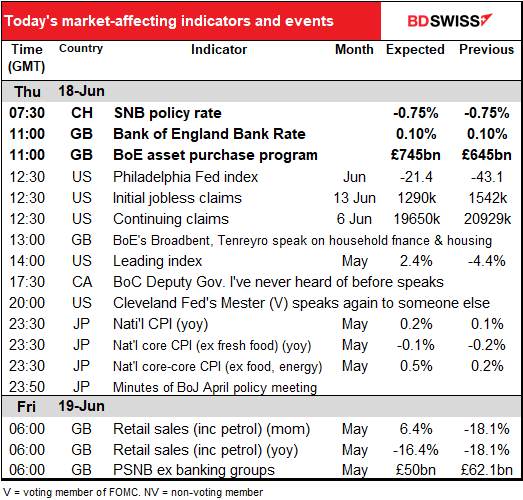 A fairly clear “risk-off” day in the FX market: JPY and CHF the #1 and #2, CAD, AUD and NZD lower. US stocks were mixed (S&P 500 down slightly, NASDAQ up slightly) yesterday. Most Asian markets were lower this morning when I started writing, except China, but now it’s more mixed – risk sentiment seems to be improving this morning.

The basic underlying concern is of course the worsening virus statistics out of several large US states, particularly Texas, Florida and California. There was also a big jump in Germany, where a meatpacking factory was closed after hundreds of workers tested positive, and in Iran, where things seem to be getting significantly worse as well.

The question then is, why was EUR the worst-performing currency – especially when I have to pay my daughter’s school fees in Japan in a week or so and missed the chance to cover my EUR/JPY position above 124!!! EUR fell Tuesday and Wednesday as doubts increase about whether the EU will be able to pass the joint EU recovery fund as proposed by the European Commission. Yesterday the PMs of Sweden, Denmark and the Netherlands, plus the Chancellor of Austria – the so-called “Frugal Four” — published an op-ed in the FT in which they support the idea of a recovery fund, but on the basis of loans, not grants. “We fully support the creation of a time-limited emergency recovery fund. We want it to target those that have been hit hardest by the Covid-19 crisis. We believe that when we borrow money together in the EU, the fundamentally sound way to use that money is to convert it into loans for those who really need them, on the best possible terms.” The article sparked renewed concern over whether the EU is going to be able to pass the legislation, as there doesn’t seem to be an agreement on the terms yet.

Friday’s European Council meeting is the next focal point for EUR as this issue will no doubt be the major topic of discussion. They’re sure to agree on something eventually, but the longer it takes, the worse for the euro.

Oil prices rose modestly after the US Department of Energy weekly inventory figures showed another decline in distillate stocks. CAD was tracking oil fairly closely yesterday, although somehow it ended up a bit weaker even though oil ended up a bit stronger. My guess is there’s a tug-of-war between the CAD/oil connection and the general “risk-on, risk-off” mentality that considers the commodity currencies as a basket. We could see CAD recover today if oil prices keep rising.

As I mentioned yesterday, the Swiss National Bank meeting probably won’t be that exciting. he SNB hasn’t made any major changes in its policy stance for quite some time and, with rates currently at the lowest in recorded history, is unlikely to do so unless absolutely necessary. EUR/CHF, its main policy goal, was moving in the right direction until recently (= up, or a weaker CHF) and they were able to intervene less in the latest two weeks, so there’s not much reason for the SNB to change now. I’d expect Chairman Jordan simply to reiterate that the SBN will keep its negative rates and stands ready to intervene in the FX market and to “take additional steps to ensure liquidity as necessary.” I wouldn’t expect the announcement to have a major impact on CHF 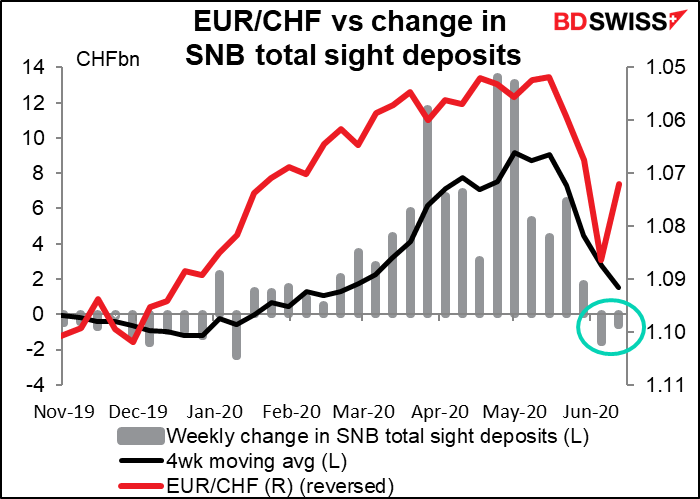 The Bank of England (BoE) on the other hand is expected to make one change: it’s widely expected to top up the Asset Purchase Facility (APF) by GBP 100bn.

The APF is an indemnified subsidiary, the Bank of England Asset Purchase Facility, that was established in January 2009 to hold the bonds that the BoE buys in its quantitative easing operations. The APF originally had a limit of GBP 50bn, which was gradually increased to GBP 445bn. At the special MPC meeting on19 March, this was increased to GBP 645bn.
Since then, the BoE has been buying GBP 13.5bn a week. At that pace, the facility will be full and purchases will have to stop by 17 July. 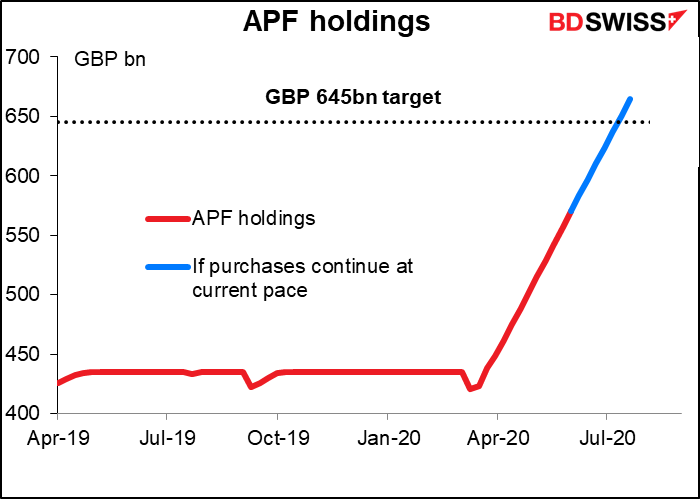 And at the last MPC meeting, on 7 May, two members proposed increasing the APF by GBP 100bn. This proposal was voted down 7-2. The next MPC meeting after this one will be 6 August. The question is, will the BoE be content to let the APF stop purchases, will it hold an emergency meeting between now and 6 August, or will it increase the size of the APF at this meeting? Given the government’s unprecedented borrowing – the April figure was GBP 62bn, as much as the government had borrowed in the previous 12 months total, and is expected to be an astounding GBP 50bn in May (see below) – the market expects (and I agree) that they will want to avoid any uncertainty and increase the target by at least GBP 100bn, the amount discussed last month. The European’ Central Bank did the same thing at its last meeting, pre-emptively topping up its Pandemic Emergency Purchase Program (PEPP) before it runs out. 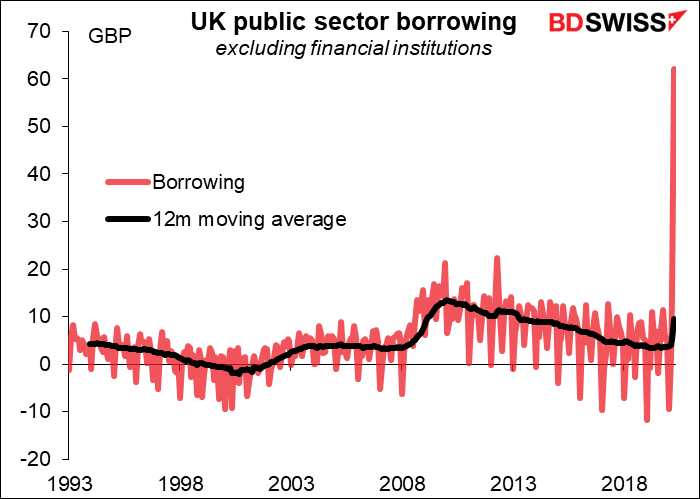 I doubt if the increase would have much impact on the pound unless it were more substantial. This is after all the consensus forecast on Bloomberg, so it would come as no surprise. It might be different if they increased it by more however. The euro rallied when the ECB boosted the PEPP by more than expected.

There are other measures the MPC could take as well. There has been some discussion about negative interest rates among the Monetary Policy Committee (MPC) members, although so far the balance of views seems to be against them. They could cut to zero though, and then provide funding at a negative spread. But it would be more natural for them to wait until the August meeting for any big changes. That will allow them to see the government’s summer fiscal statement and updated forecasts in the quarterly Monetary Policy Report (MPR) to be published in August. Plus the August meeting will be followed by a press conference or at least a briefing by the Governor, as happened after the May meeting.

While there isn’t a press conference or even a briefing after this meeting, MPC members Broadbent and Tenreyro will speak at a virtual workshop on “Macroprudential regulation of households” later in the day. They won’t necessarily opine on the meeting, but there could be some questions from the audience. You can tune in if you want: https://register.gotowebinar.com/register/21676179462360334

The Philadelphia Fed business sentiment index is forecast to rebound somewhat, but an upward surprise seems likely. Earlier in the week, the Empire State manufacturing index astonished and amazed observers by bouncing all the way back to -0.20 from -48.50 – it was expected to be -28.80. When I first wrote this up, on Sunday, the Philly Fed index was expected to be -27.4; now it’s -21.4. The reason it’s not even higher is that some people make their forecast before the Empire State index comes out and some people submit it afterward. In any event, I’ll be looking out for a similar upside surprise today from the Philly index. 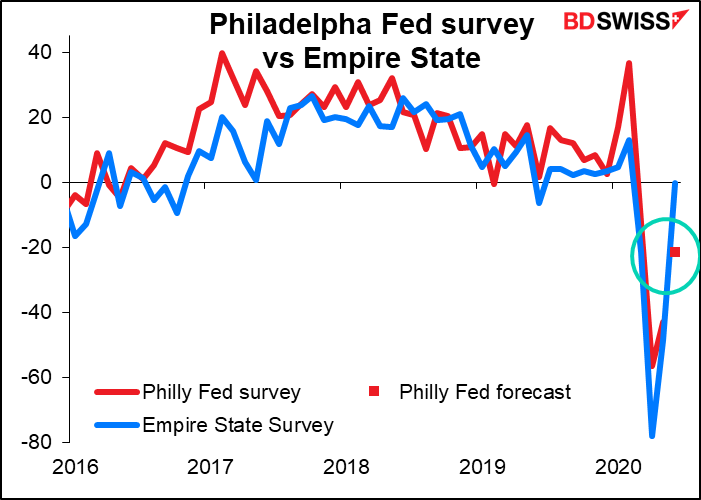 Then comes the regular highlight of the week, the weekly US jobless claims.

Initial claims are expected to continue their gradual decline. 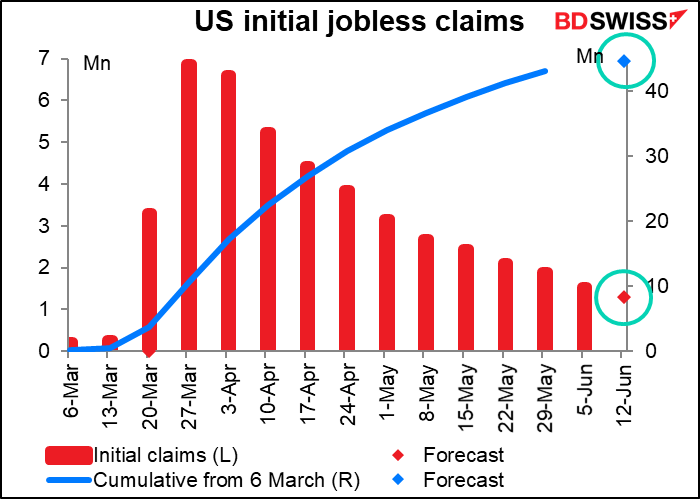 Last week they declined by a little more than expected. The average for the last four weeks has been a decline of 286k a week; this week they’re going for -252k. Seems as good a guess as any. 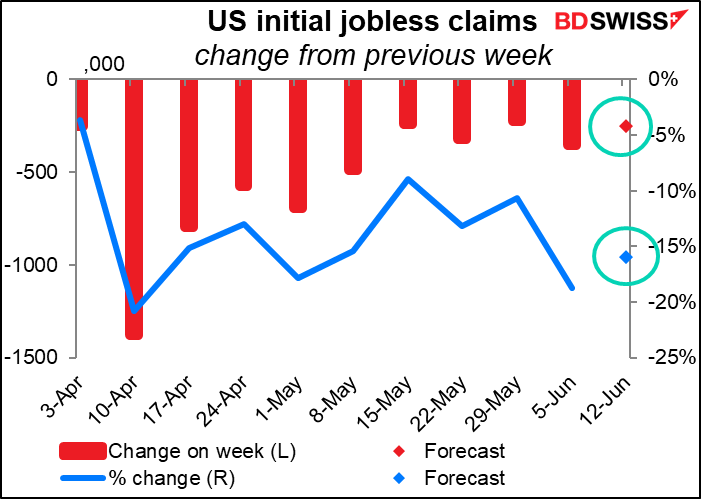 The market is also looking for another decline in the continuing claims figure. This is actually the more important of the two, because it shows that even though nearly 2mn people a week are losing their jobs, still more people are moving off the unemployment rolls than are being added. That’s encouraging. 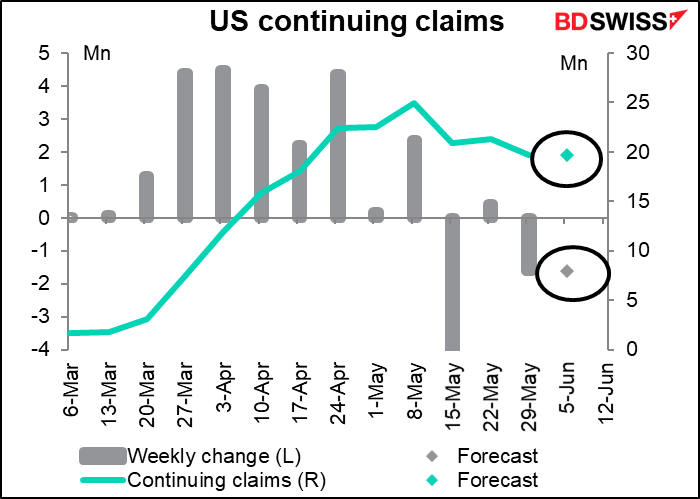 The US leading index probably isn’t market-affecting. I just include the graph for your amusement to show what an outlier this event is. The March figure was a 12 standard-deviation event, April was 5 standard deviations, and May is forecast to be 7 standard deviations. By all probability, this shouldn’t be happening during this geological era. But it did. 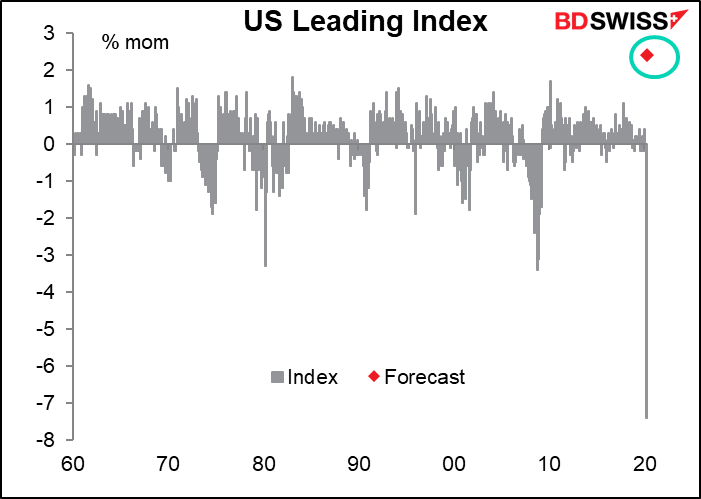 Bank of Canada Deputy Governor Lawrence Schembri will make a speech by videoconference. The speech will be broadcast live on their website. I have to admit I’ve never noticed this fellow before, although a quick look through Bloomberg does show that he speaks occasionally.

Then overnight we get the King of the Boring Statistics, the Japan national consumer price index (CPI). One month it’s up a bit, the next month it’s down a bit. Twenty-five years of mostly below-target growth. This month it’s expected to be up a bit, in line with the previously-announced Tokyo CPI. So no surprise there. Still, no one has any illusions or delusions that it’s ever going to get back to target, so it’s pretty much pointless – no one dreams that the Bank of Japan is going to alter policy because of it. But still I have to make the graph and write about it every month, because…well, just because. It’s the CPI. I can’t very well ignore it, can I? 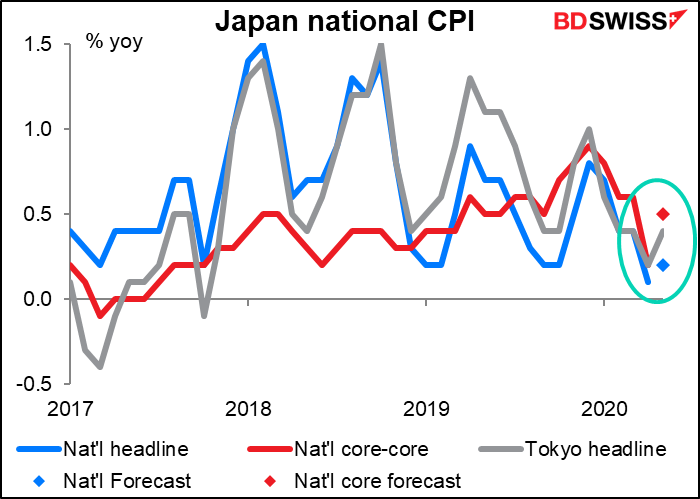 As usual, I think it’s more useful to show the level than the mom or yoy changes, which are going to be off the chart anyway.

In April, UK retail sales collapsed back to the level of 2006 or so. For May they’re supposed to come back to around the level of 2014. Better, but still well below what the were in recent months. 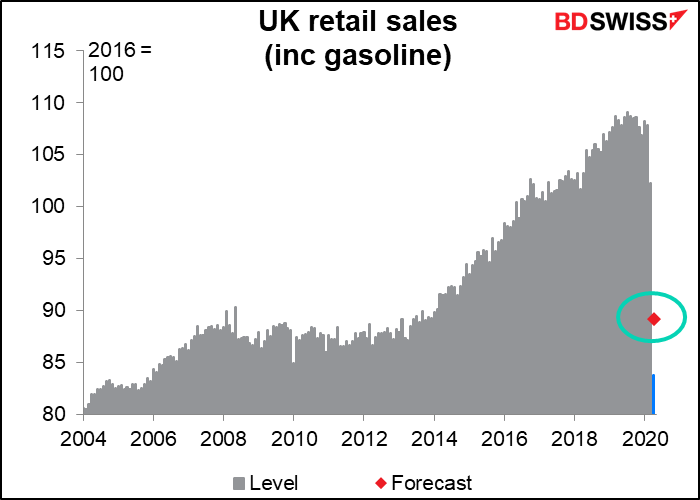 The UK government’s public sector net borrowing (PSNB), excluding financial institutions, is expected to reach another unheard-of level. April was the record – it was equivalent to about the previous 12 months of borrowing combined. May is expected to be not so far behind. 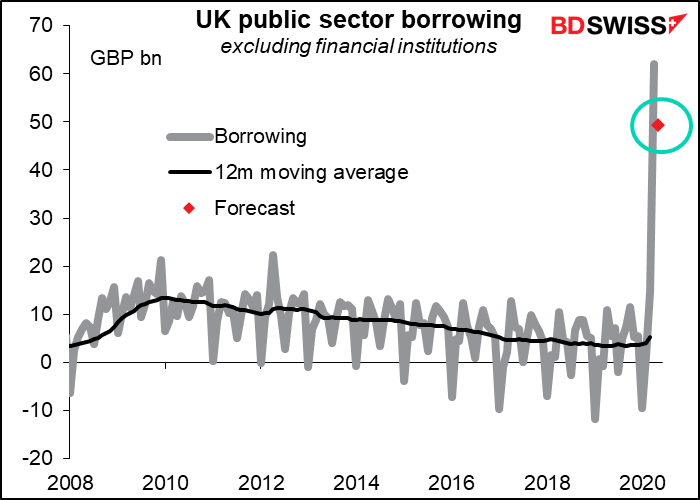 Soaring issuance hasn’t hurt the gilts market particularly. UK bond yields are only marginally higher than those in Japan, which is operating under “yield curve control” and has lower inflation than the UK. 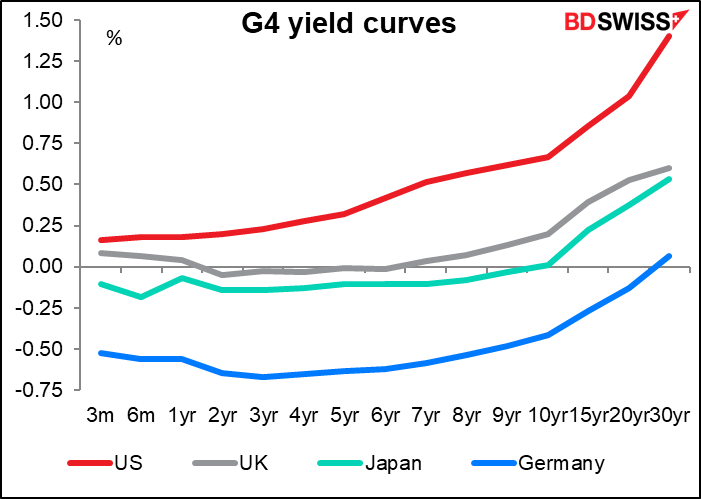 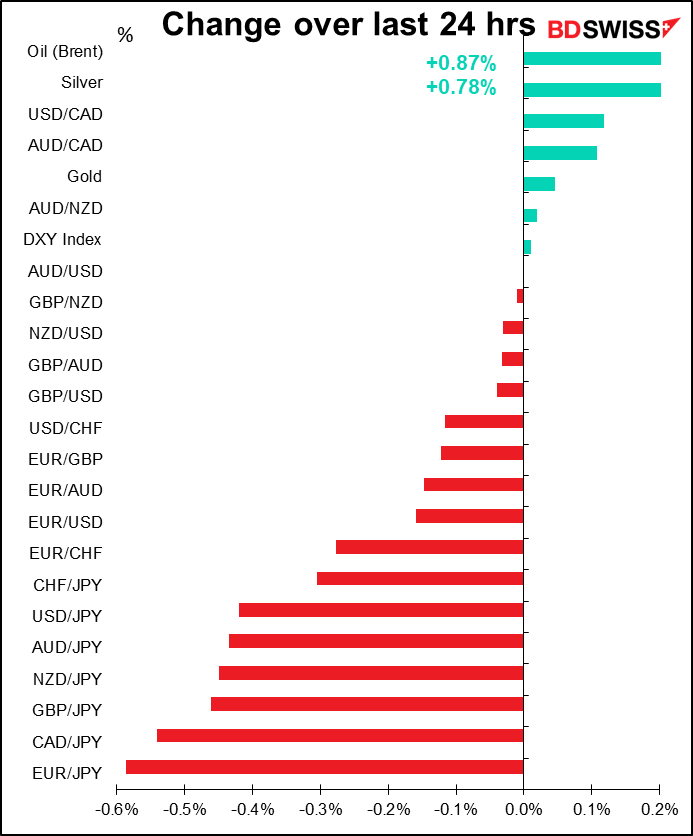