A generally “risk-off” day as European stocks fell sharply, and the crypto-currency market imploded. Bitcoin was down more than 30% on the day at one point before recovering to finish US trading down around 12%. Other cryptos, such as Ethereum, Litecoin, and XRP suffered similar or even greater losses. 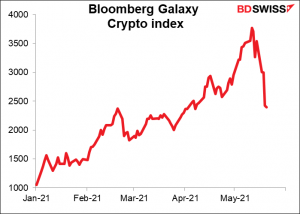 One might’ve expected this kind of chaos in risky assets to be a good background for bonds, but US Treasuries fell too on a poorly received 20-year bond auction and especially a first reference to tapering in the minutes of the Fed’s April meeting. The key phrase was, “A number of participants suggested that if the economy continued to make rapid progress toward the Committee’s goals, it might be appropriate at some point in upcoming meetings to begin discussing a plan for adjusting the pace of asset purchases.” So, in the immortal words of Fed Chair Powell, they have indeed begun “thinking about thinking about” tapering their purchases. This news sent bond yields higher and inflation expectations lower, with the result that US real 10-year yields rose by some 9 bps, thereby supporting the dollar.

The risk-off mood was negative for the commodity currencies, with AUD and NZD being the major decliners. CAD fared better as Canada’s consumer price index (CPI) came out higher than expected at +3.4% yoy (+3.2% expected, +2.2% previously). Two of the three core CPI measures were also higher than expected too. This helped support CAD despite lower oil prices.

It was noticeable though that in this classic “risk-off” move, CHF weakened. I wonder if there aren’t some “supernatural forces” operating in the FX market here, aka the Swiss National Bank. Either that or asset managers have continued dumping CHF.

The mood this morning seems fragile. Stocks in Asia are mixed, with few big movements either way. The S&P 500 is indicated down 1.75 point, which is nothing. So, no further downward momentum but no bounce, either. I’d be careful today. I think the mood could sour further and risky assets could have another rough day. 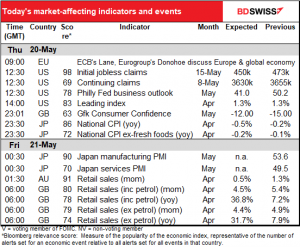 Not much on during the European morning in the way of indicators. We have to wait until it’s morning in America before we get any hard data.

Initial jobless claims are expected to be down 23k, which would be pretty much in line with the average for the last month (-28k). I think this would be well received as further proof of an improving labor market, particularly as this week’s jobless claims cover the survey week for the May nonfarm payrolls. 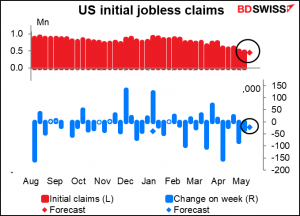 The Philadelphia Fed business outlook is expected to fall precipitously, but given that last month’s 50.2 was the highest since 1973, probably no one will complain. By comparison, the average over the last decade has been 11.10, so you can see how far above normal the indicator is already. 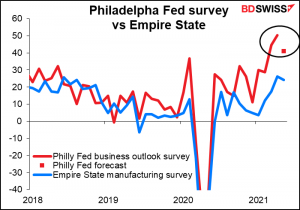 The US leading index is expected to be unchanged at 1.3. That’s quite a high level, the highest since September. By comparison, the average from 2010 up until the pandemic was 0.3, so this is still a historically high level implying relatively strong growth ahead.

All together, I think these three indicators would confirm the narrative that the US has pretty much reached lift-off. That could be beneficial for US stocks but negative for the dollar. 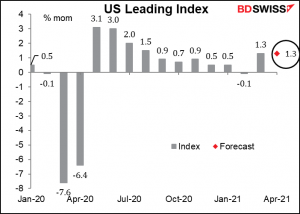 Then it’s pretty quiet until Asia opens for business and the Japan national consumer price index (CPI) is announced. Judging from the Tokyo CPI, this is likely to be a disaster as the inflation rate is forecast to fall. Not many countries can say that nowadays. This week we saw the UK CPI more than double to 1.5% yoy from 0.7% and the Canadian CPI jump from 2.2% yoy to a higher-than-expected 3.4% yoy. But after some 25 years of zero interest rates, quantitative easing, and quantitative & qualitative easing, Japan is expeced to fall further infot deflation, both on a headline basis and core CPI. Go figure. I bet Milton Freedman never figured on this happening when he said “inflation is always and everywhere a monetary phenomenon.” 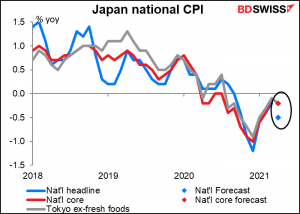 Japan also starts Friday’s round of preliminary purchasing managers’ indices (PMIs) for the major industrial economies, but there’s never any forecast for Japan. The big question for Japan is whether the service-sector PMI, 49.5 in April, will finally poke its nose above the 50 line this month. 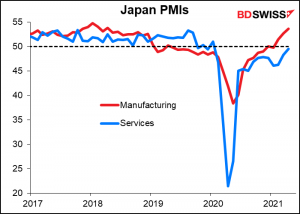 Then once again we wait until it’s morning in London and we get the UK retail sales. They’re expected to show a robust +4.5% mom increase. This could be positive for GBP as it suggests the economy is rebounding. 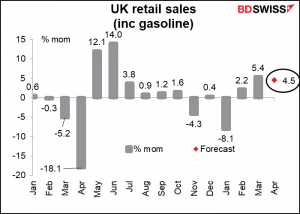 UK retail sales have been holding up relatively well. Not as well as in the US, where the supplementary payments in March sent sales soaring, but as good as in Germany and perhaps better than Japan (April data isn’t available for those two yet). 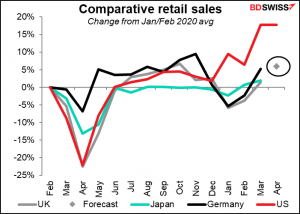 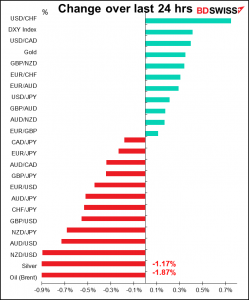