You are at:Home»MARKET PREVIEW»“Risk Off” Hits The Usual Suspects; US Nonfarm Payrolls 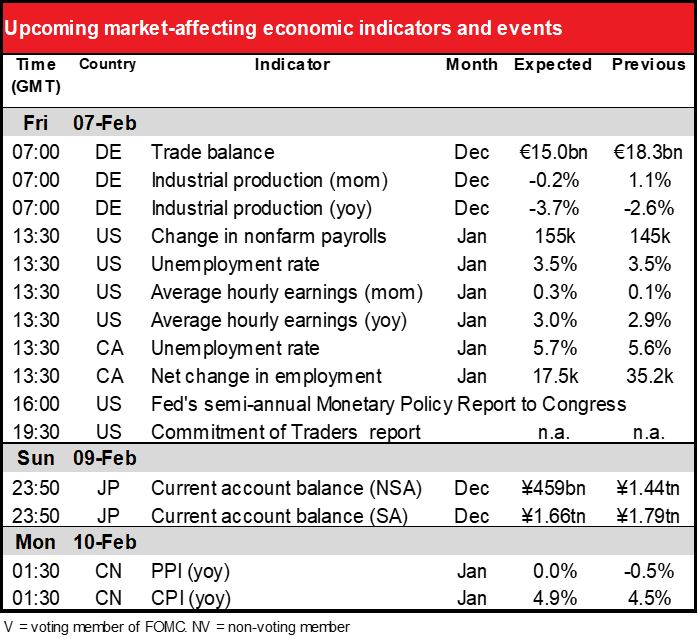 Yesterday was “Day A,” a risk-on day. Today is “Day B,” a risk-off day as stocks in Asia turn lower. JPY and CHF are top, AUD and NZD are bottom. Gold and silver are up (gold up slightly more than silver, again) and oil is down.

According to the Johns Hopkins CSSE web site, the increase in infections in China is starting to slow, but it’s certainly contnuing upwards – just the pace of growth is not going vertical, as it would if it were a typical exponential growth. That’s somewhat reassuring, but not very. 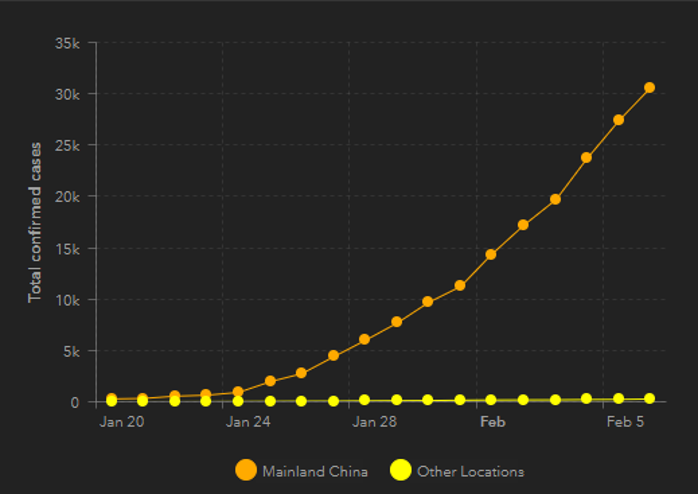 AUD fell gradually during the day, with another leg down as  Reserve Bank of Australia (RBA) Gov. Lowe testified to Parliament and then the RBA released its Statement on Monetary Policy (SMP). That was kind of surprising, as the news wasn’t particularly bad. Lowe signalled that the RBA is on hold and it would take signs of rising unemployment and stalled inflation to get them to cut. By contrast, the SMP forecast that unemployment would fall to 4.75% next year from 5.1% now. However, there remain “significant areas of uncertainty” to the outlook, including of course the coronavirus.

Probably the market is skeptical about the RBA’s main assumption, that it expects a quick rebound from the virus like what happened with the SARS virus in 2003. In order for that to happen, the virus will have to stop spreading relatively quickly, and it’s clear from the graph above that that’s not happening yet.

The pound of course is the outlier here, as it’s being moved more by Brexit worries than coronavirus concerns. There was news  Thursday that European officials are considering amending MiFID II to weaken Britain’s financial business. That would be a disaster for Britain, as about half of the country’s surplus in trade in services comes from financial services (including insurance and pensions). 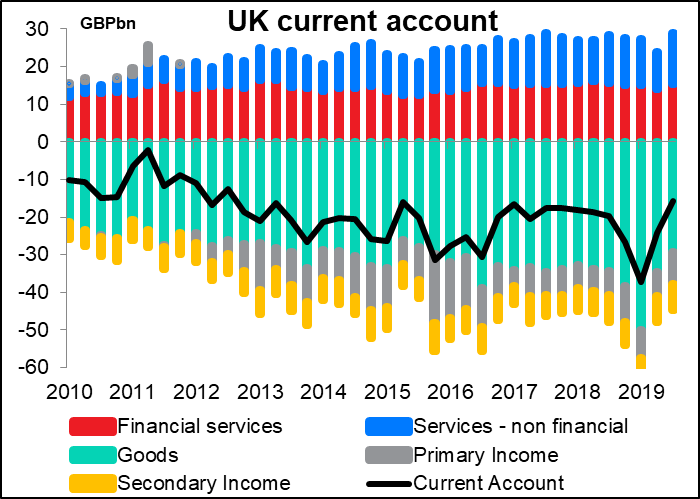 There was also a report that Trump was “apoplectic” at UK PM Johnson during a recent phone call about the UK’s decision to involve Huawei in its 5G phone network. That’s not going to help the UK when it comes to forging a new trade deal with the US. So if Britain has problems negotiating a new trade agreement with its #1 partner, the EU (44% of total trade) and its #2 partner, the US (11% of total trade), maybe it’ll have better luck with its #3 partner, China (7.5%). All in all, I expect that the post-Brexit trade negotiations will continue to weigh on Britain, a country with one of the largest current account deficits in the world.

The focus today is of course on the US nonfarm payrolls (NFP). The NFP is indisputably the most closely watched indicator every month, although personally I think the inflation data – particularly the core personal consumption expenditure (PCE) deflator, the Fed’s preferred inflation gauge – is more important. But the NFP is more volatile and harder to predict than the core PCE deflator and so the NFP announcement tends to move markets more. Besides, it’s assumed that inflation follows employment as a tighter labor market is supposed to lead to higher wages and therefore higher prices – although it hasn’t worked out like that for some time now.

Having said that, in fact the market volatility on NFP days isn’t as great as people may think. In fact, the daily range in EUR/USD on NFP days has actually been less than on the average day. This may be because people hold off taking positions ahead of the figure, and then don’t find a compelling reason to trade. 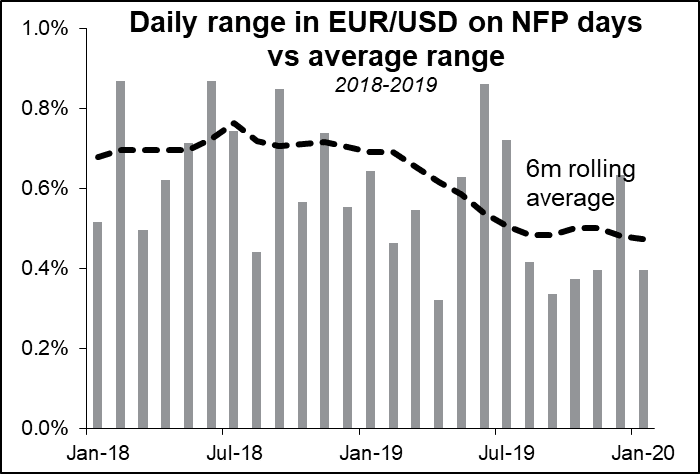 This month’s forecast for the NFP is hardly surprising. The market consensus for this initial figure is for an increase of 165k jobs. The six-month moving average of the initial figure is…162k. Surprise, surprise. Maybe I can get a job forecasting these indicators, too? The Bloomberg “whisper” figure is currently a slightly higher 177k. On Tuesday the “whisper” was 144k, below the market consensus — after Wednesday’s surprisingly strong ADP report, market participants revised up their estimates of what the NFP is likely to be.

The unemployment rate meanwhile is expected to stay at the 50-year low of 3.5%. 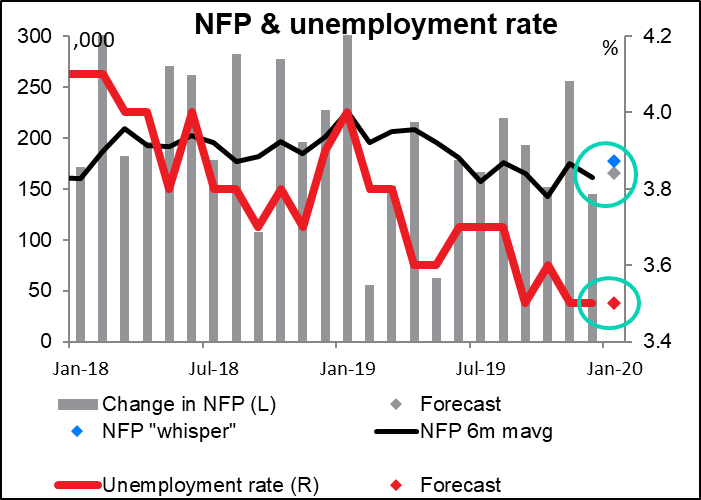 Although the NFP number is what everyone talks about, in fact I’d argue that the average hourly earnings (AHE) are more important. That’s because the Fed wants to see a tighter labor market feeding through to higher wages and thereby pushing inflation back up towards its 2% target. Indeed, some committee members have argued that that’s the very definition of a tight labor market – that the economy is not at full employment until wages are rising.

The forecast is for a +0.3% mom rise in the AHE, which would mean modest acceleration in the yoy rate to +3.0% from 2.9%. That would probably be bullish for the dollar in that it shows an improvement in the labor market. 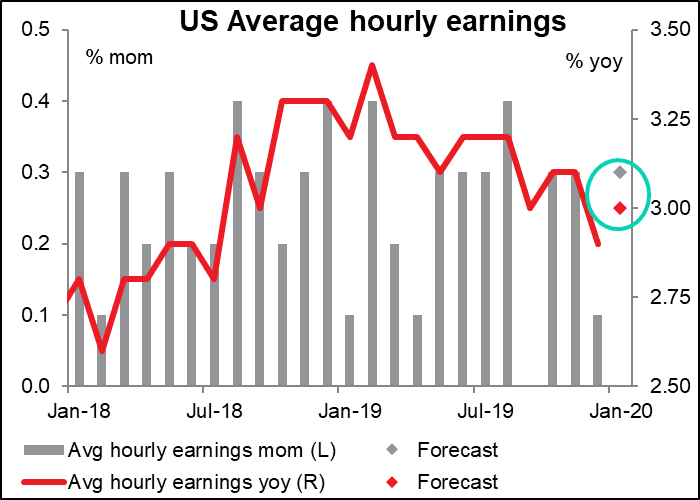 Assuming the figures hit the forecasts, the data are likely to be modestly bullish USD,  in my view. Continuing at trend would at least indicate that there hasn’t been a slowdown in the job market yet, which is what everyone is worried about. Furthermore, the slight acceleration in earnings that’s expected would suggest that the slowdown in the annual pace of growth may have bottomed. 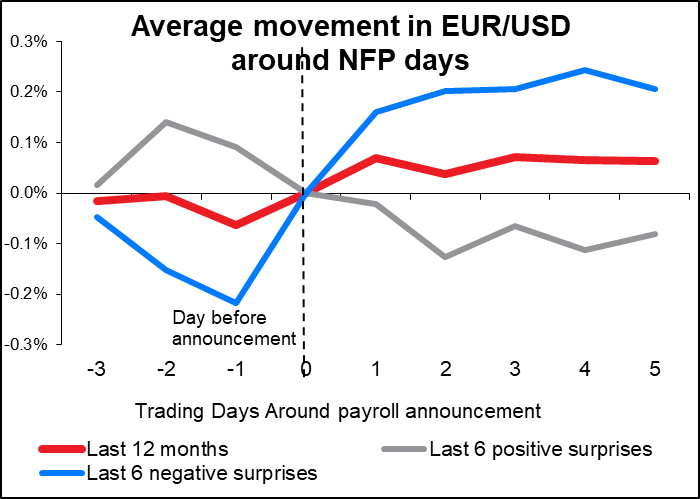 However,beware! Those averages mask a large variation in the performance, which is affected by many other factors, such as the size of the beat or miss as well as what happens with the average hourly earnings. For example, a few days after a beat, EUR/USD was higher as often as it was lower – it’s just that when it did fall, it fell by more than it rose by. 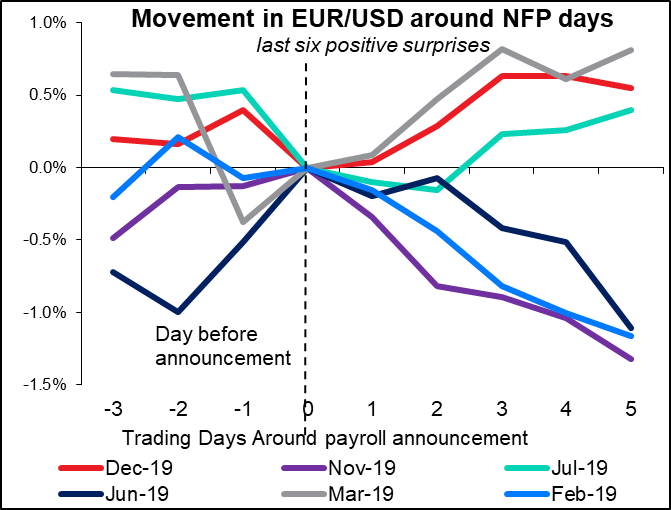 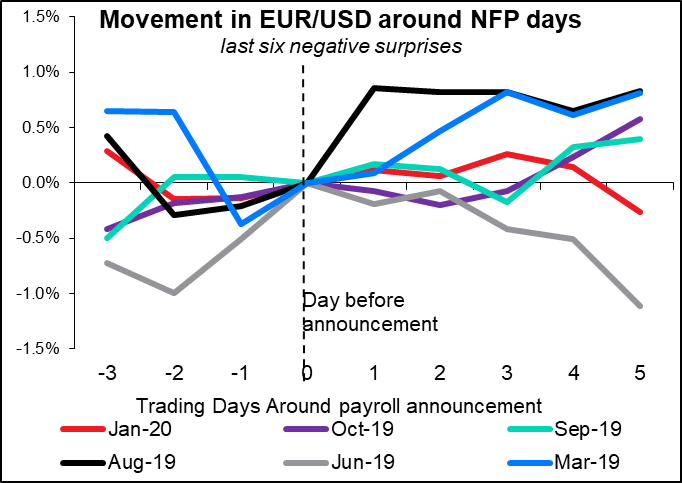 Along with the US employment data, Canada also announces its employment data. The unemployment rate is expected to tick up one tick but remain within the recent range, while the net change in employment is expected to be more or less in line with the recent trend. The Bank of Canada noted at its 22 January meeting that “job creation has slowed,” so this modest result should not come as any surprise. Insofar as it’s in line with recent results, I don’t think it has much policy implications. CAD neutral 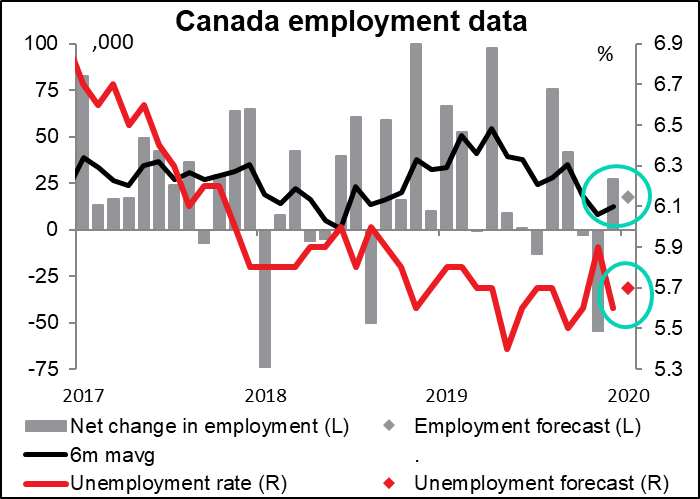 Elsewhere on today’s schedule, the Fed’s semi-annual Monetary Policy Report will provide a preview of Fed Chair Powell’s testimony to the House Financial Services Committee (11 Feb) and the Senate Banking Committee (12 Feb). I don’t expect any big deviation from the statement that followed last week’s FOMC meeting and Powell’s press conference afterwards, when he said the Fed expects consumer spending to keep the expansion going despite the soft patch in global growth and domestic business spending. Fed Vice Chair Clarida last Friday echoed those comments, saying that the growth picture may be affected for the next several months by temporary factors, such as the coronavirus and the problems at Boeing, but that “one or two quarters of slower growth wouldn’t change the big picture.” 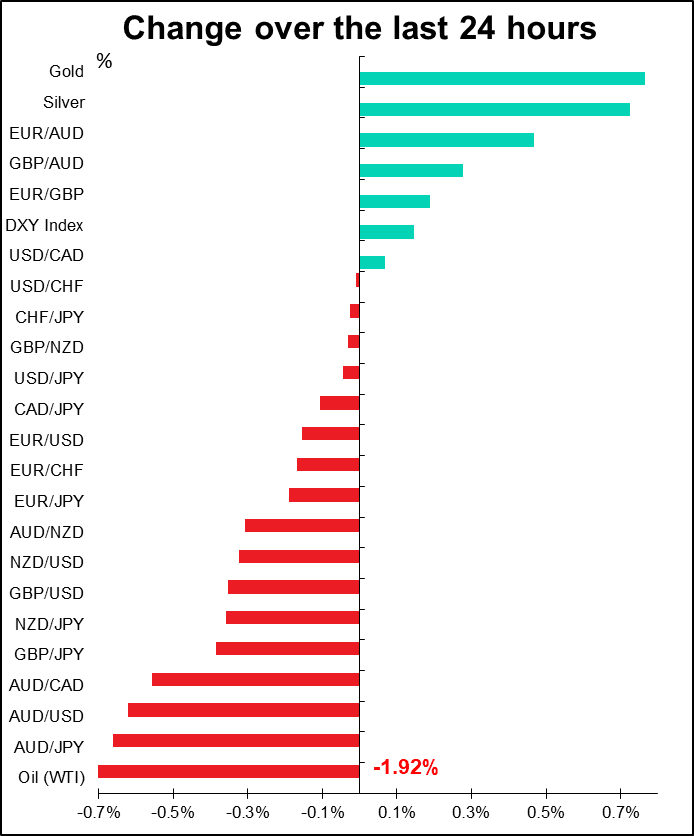