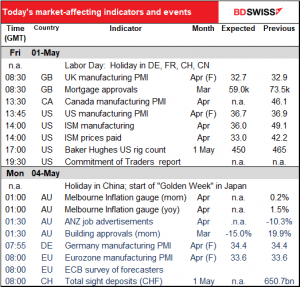 A “risk off” day in New York, with stocks trading lower. Tokyo and Sydney are lower this morning too. Other Asian markets are mostly closed for the Labor Day holiday, which will dampen activity in Europe as well. The late day fall in the S&P 500 diminished the market’s gains for the month and turned April from the best month since October 1974 to the best month since January 1987. Still a pretty amazing result considering 20mn people lost their jobs during the month and 60,000 have died from a virus – more than the number of Americans who died during the Vietnam War.

The mood was reflected in currencies as well, with CHF the top gainer and AUD and CAD leading the way lower. JPY was the outlier here as it fell as well, probably on month-end flows unrelated to the fundamentals.

The big shocker was when ECB President Lagarde said during the press conference that the ECB would not employ Outright Monetary Transactions (OMT) as we are “no longer facing a situation that OMT was designed for.” Instead they preferred to use the Pandemic Emergency Purchase Program (PEPP). The OMT is a program in which the ECB buys bonds of Eurozone countries in the secondary market (outright transactions) under certain conditions. One of these conditions is that the country should be in a European Financial Stability Facility/European Stability Mechanism (EFSF/ESM) program. Using the PEPP instead discourages the use of the ESM just a few weeks after the Eurogroup of Eurozone finance ministers agreed on a EUR 540bn rescue package via the ESM. It therefore undermines the recent policy action of the Eurogroup and shows a lack of fiscal-monetary coordination. Furthermore, in theory the ECB is supposed to buy bonds in proportion to the countries’ contributions to its capital (the “capital keys.”) The OMT can be used more efficiently to allow the ECB to buy bonds in a different ratio, which would allow it to buy more Italian bonds. That’s the country that really needs it.

Oil gained despite the general risk-off mood. This was a continuation of Wednesday’s rally on a fall in US gasoline inventories and signs that some OPEC members have already started to cut back production. It was noticeable that CAD didn’t follow oil but rather went with the overall direction of the FX market.

USD/CNH was noticeably higher (i.e., CNH was noticeably weaker following an article in the Washington Post claiming that the Trump regime was crafting retaliatory actions against China over the virus. I don’t have a subscription to the paper so I can’t tell you exactly what it says, but elsewhere I read that White House Economic Advisor Kudlow denied that the administration was considering canceling some of the $1.092tn in US Treasuries that China holds. Nonetheless, China does control its currency and has been known to use it as a signal. A move like this outside its recent trading range may well be such a signal. If sustained, it bodes ill for other emerging market currencies, which often take their cue from China.

Jokes of the Day (from Twitter):  1) Given the market rebound vs the risks ahead of us, you might be thinking about the old market adage “Sell in May and Go Away.” It’s impractical this year however as we can’t go anywhere.

2) (Following yesterday’s ECB meeting) I’m beginning to wonder if Llanfairpwllgwyngyllgogerychwyrndrobwllllantysiliogogogoch is the name of the famous train station in Wales or an ECB policy measure set to be announced in 2031.

We can expect a fairly quiet day in Europe with many countries on holiday for Labor Day.

For those countries that are open today, Markit will be announcing the final version of the manufacturing purchasing managers’ indices (PMIs) (for those that have preliminary versions) and the one-and-only version for those that don’t.  Usually the revisions are small and not market-affecting, but nowadays you never know.

UK mortgage approvals are forecast to plunge back to levels not seen since 2013, when the country was still in the grips of “austerity.” They’re expected to remain well above where they were in 2008/09 however. 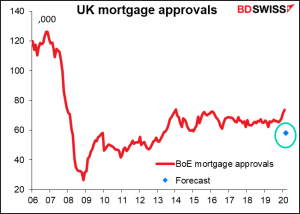 I’m not sure how long they’ll last, though. If we look at the Royal Institution for Chartered Surveyors (RICS) new buyers enquiry data, it suggests an even bigger plunge is coming. The index has fallen to -74.5, even worse than the -67.3 hit in May 2008. (The index is a diffusion index of how many surveyors saw an increase in buyer enquiries minus a decrease.) It’s hard to go look at a new flat when you can’t leave your current one. 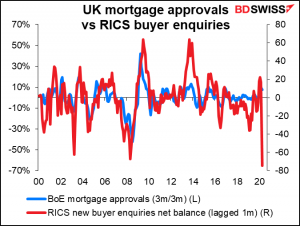 The Institute of Supply Management (ISM) purchasing managers’ index (PMI) is expected to plunge back to the levels last seen in 2008. The new orders index isn’t expected to go quite that far, but wait a month or so. This index is different from the Markit PMIs in several ways, including that it does not restrict its questions to companies’ domestic operations but also includes their overseas operations. It’s therefore in some ways a better gauge of global conditions than of domestic US conditions. 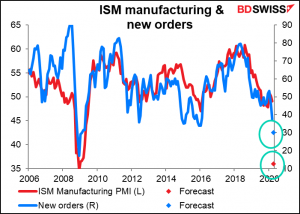 After several weeks of extremely large cuts, the Baker Hughes rig count is expected to show only a modest decrease in the latest week. The US has lost 41% of its oil and gas rigs in six weeks, so it wouldn’t be surprising if the decline slows down. 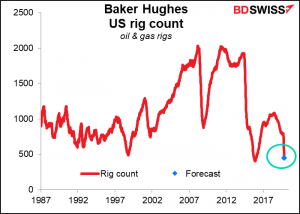 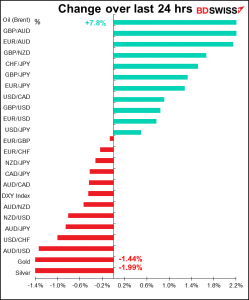