In general it’s a “risk-off” day today. Stocks closed down 0.8% on Wall Street and all Asian markets are lower this morning.

Most of the preliminary purchasing managers’ indices (PMIs) for May improved, indeed came in better than expected (especially US services), which suggests that global activity troughed in April. The Philly Fed index showed a record one-month rise. Finally, the US Census Bureau’s experimental new weekly Household Pulse Survey pointed to improving income expectations as all 50 states started gradually reopening (with varying degrees of safety). Nonetheless, the mood was dominated by growing US-China tensions. The Senate passed a bill that would require companies to certify that they are not under the control of a foreign government. It’s aimed at Chinese companies and could force many to delist from US exchanges. The bill passed the Senate overwhelmingly and a Democrat introduced a similar measure into the House of Representatives, demonstrating that this is a bipartisan move with broad support. The White House released a report, United States Strategic Approach to The People’s Republic of China, that was openly hostile to China and talked about “a tolerance of greater bilateral friction.”

These moves are clearly an attempt to distract attention from the Trump regime’s appalling handling of the COVID-19 pandemic, but never mind why it’s happening – the fact is that it is happening and is likely to weigh on investment sentiment.

Increased US-China trade tensions is negative for AUD in particular, also NZD. The currencies shook off the problems on Wednesday and were only somewhat affected on Thursday as investors focused on these countries’ relatively virus-free recoveries, but that could change as the China trade tensions get worse.

It’s unusual, but not unheard of, to have JPY the #2 best-performing currency and CHF the #2 worst-performing currency. JPY was lifted by the “risk-off” mood; also, the Bank of Japan (BoJ) introduced a new funding scheme for banks that it estimated would reach JPY 30tn to encourage banks to lend to smaller companies at zero rates with no collateral. Finally, PM Abe released Osaka, Kyoto, and Hyogo prefectures from the state of emergency and suggested that such measures could be lifted in Tokyo as early as May 25 should current trends hold. We’ve seen currencies respond well to hints of higher activity, and the lending program plus end to the lockdown should help boost the Japanese economy.

On the other hand, CHF was probably weakened as EUR/CHF pushed back above 1.06 in conditions of lower liquidity in Europe as France and Germany were on holiday.

I was surprised to see GBP  as today’s best-performing currency, as it became clear that PM Johnson lied about post-Brexit trade between Northern Ireland and the rest of the United Kingdom. UK Cabinet Office Minister Michael Gove discussed a new “limited administrative process” for goods entering Northern Ireland to make sure that the right tariff has been paid and they meet EU standards. Furthermore – shock horror! — British cats, dogs and ferrets will need an EU pet passport to travel to Northern Ireland after end of the Brexit transition period! What’s particularly disturbing about all this is that although this is more onerous than what PM Johnson promised beforehand – proving that he was “economical with the truth” in order to get Brexit passed – it probably won’t be enough to satisfy the EU anyway. I’m still bearish GBP.

China’s National People’s Congress, meeting in Beijing, abandoned its decades-long practice of setting an annual GDP target. Instead it said t would continue to increase stimulus and focus on maintaining employment and investment. Good thing too, because the only thing that the GDP target accomplished was ensuring that the statisticians cooked the books to make sure that the target was met.

Not much on the schedule for today!

UK retail sales and public sector borrowing are already out. Besides, I discussed those yesterday.

We then have to wait for Canada retail sales. Retail sales everywhere have been a disaster. It’s the same graph just with different labels, so I’m not going to make yet another graph showing exactly the same thing. In this case, the forecast decline of  -10.5% mom is more than double the previous record (-4.5% in Jan 1998), which coincidentally came after the record rise of 3.7% mom in Dec 1997 – looks like some taxes were raised in January so everyone went shopping in December. Even in December 2008, the #2 decline, sales were down only -3.9% mom.

People are forecasting still more declines in the US oil & gas rig count, however at a diminishing pace. Still, today’s forecast that the US would lose 22 rigs in the latest week would’ve been quite a substantial number before they started collapsing in March. Fewer rigs = less oil being pumped = bullish for oil prices, but negative for the oil industry. 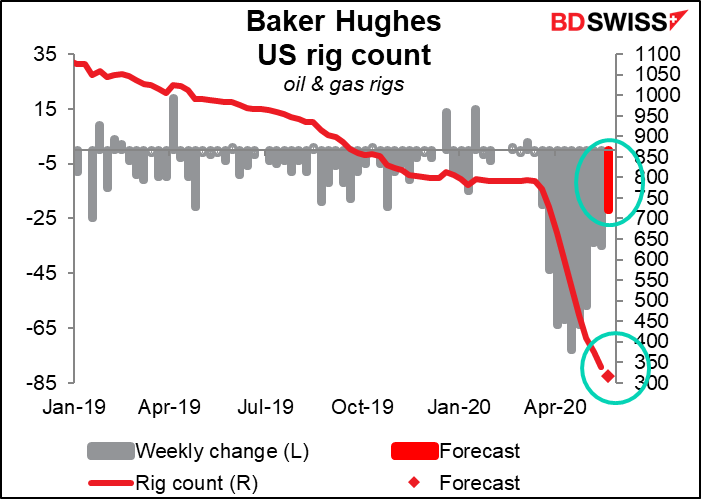 Nonetheless, the spreads of high-yield bonds in the energy sector continue to narrow. I would guess that this has to do as much with “supernatural forces” in the market (aka the Fed) as to the fundamentals in the energy industry. Although it does somewhat follow the path of WTI, with the exception of the plunge that accompanied the maturity of the May contract (the graph uses the price of the second contract to reduce the impact of that incident). 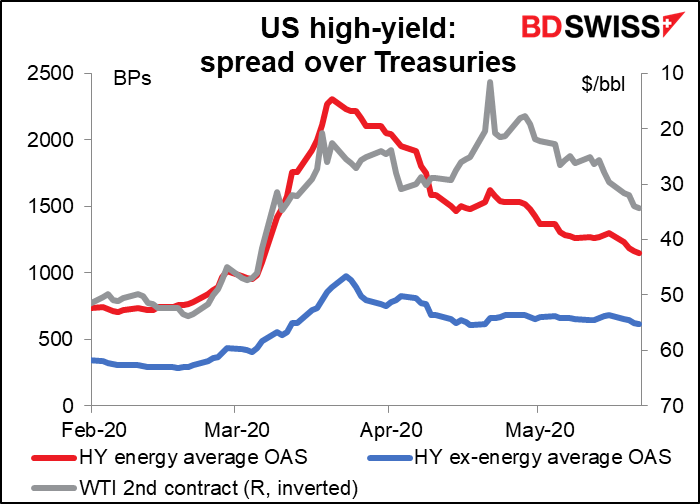 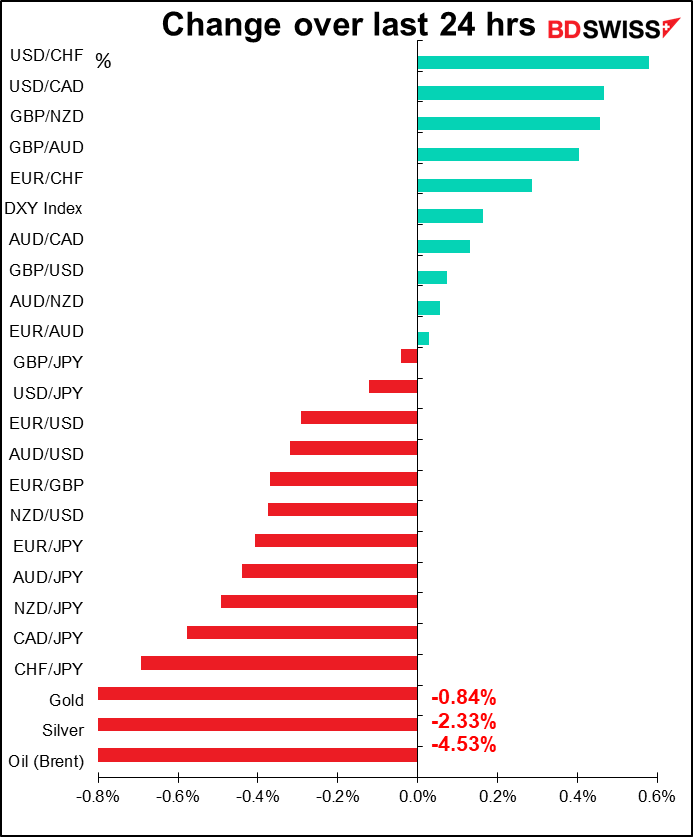