You are at:Home»MARKET PREVIEW»“Risk off” as COVID-19 Spreads in US; US Nonfarm Payrolls 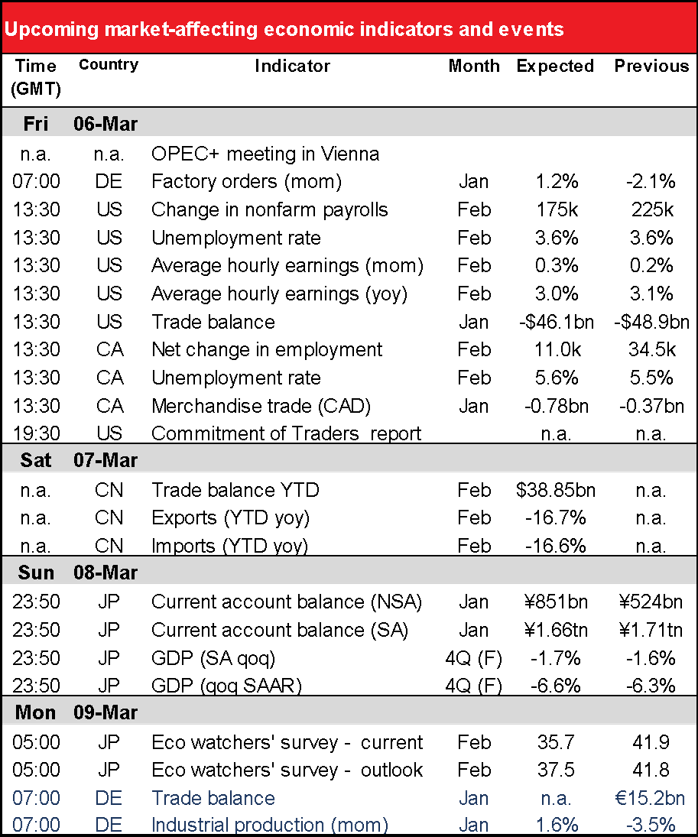 Another big “risk off” day with the screens a sea of red. US stocks were down 3.4% and every Asian stock market is down as I write.

Typical “risk off” move in the markets, with JPY and CHF leading the way up and AUD the main loser. Gold soared, oil plunged.

Despite the drama and increased volatility, the market is actually quite simple. It’s all down to the virus. The daily change in the total number of cases is starting to accelerate as the virus spreads around the world. An increasing number of cases in the US is particularly worrisome. 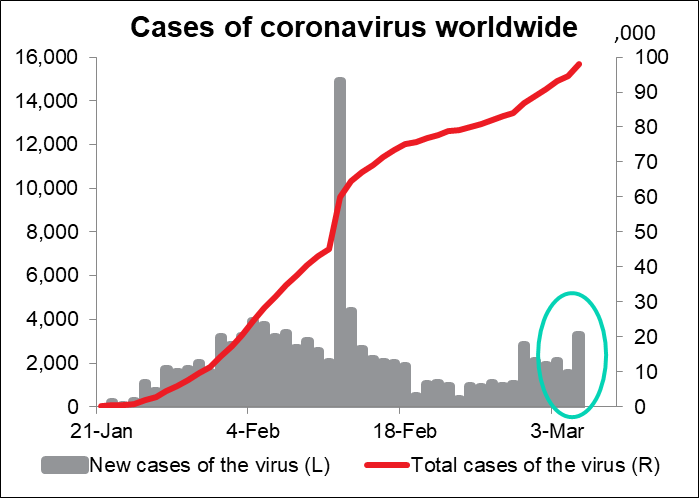 Oil plunged, with Brent closing below $50 for the first time since mid-2017. OPEC ministers are apparently trying to force Russia to accept a large supply cut of 1.5mn barrels a day (b/d) (OPEC 1mn, non-OPEC 500k) that would last until the end of the year (vs the initial suggestion of three months). Russia doesn’t agree. Ministers told Russia that if it doesn’t join in the new cuts, then the group could abandon all its production quotas. Usually the group manages to pull a rabbit out of the hat and come to some last-minute agreement. That’s what I would assume will happen this time too – Saudi Arabia will once again act as the “swing producer” and come up with some compromise that will leave them producing less but the group still hanging together. However, the market seems to be voting “no.” 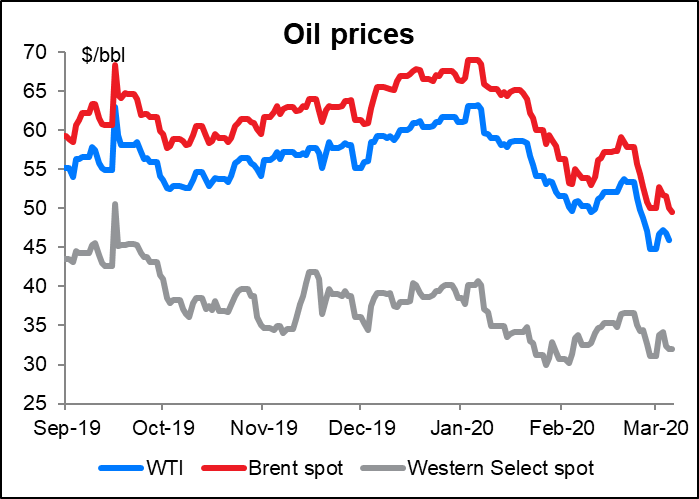 We covered the German factory orders yesterday, as it’s probably out by the time you read this.

Russia and a few other non-OPEC countries join OPEC today for the “OPEC+” meeting. As mentioned above, it seems to be an “all or nothing” effort to push through large cuts. The market seems to be betting that “nothing” wins.

So now while watching the oil price go up and down – mostly down – you can get ready for the US nonfarm payrolls (NFP).

The NFP is still a major focal point for the market each month, but not like it used to be. See my weekly comment for a detailed discussion of this topic. And especially now, we can ask, do the numbers really matter? The market is already positive the Fed is going to cut three more times this year. I doubt if the NFP or average earnings could be either so good or so bad as to change peoples’ minds either way. As I’ve said before, the virus matters more than jobs. 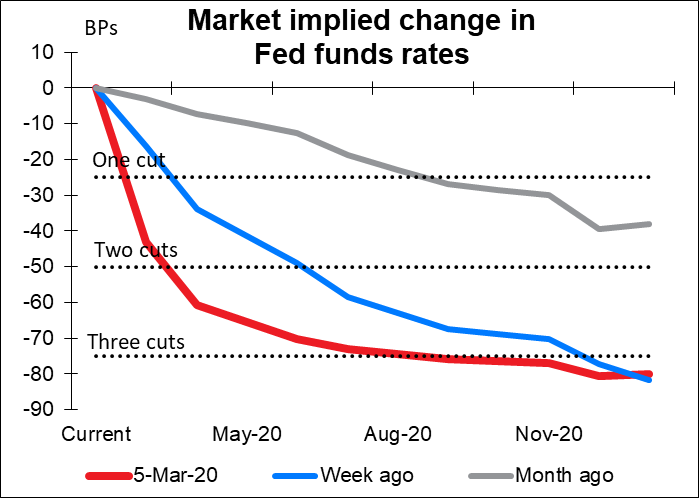 Be that as it may, the market is looking for a figure exactly in line with the recent trend. The forecast for the NFP number is 175k, which is almost exactly the six-month average for the initial figure of 172k. And the unemployment rate is forecast to stay at 3.6%. Not much change in the data = not much change in the currency, either. 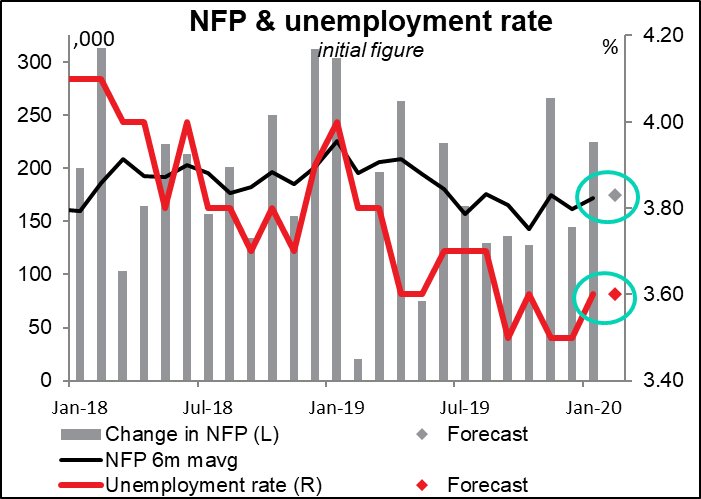 The forecast for average hourly earnings (AHE) is also the same as it was last month: +0.3% mom and +3.0% yoy. I think it would be serious if the yoy rate of growth slips below 3.0% — it’s been above that level since August 2018. A slower rate of growth in earnings suggests slack in the labor market, regardless of what the unemployment rate is (at least according to traditional economics). In my view, this is the main point people should be focusing on:  what’s happening with earnings growth?  Does it continue to slow? Or does it level off, as the market is predicting? Or maybe start accelerating again? I expect the currency market to react more to the AHE than to the NFP number itself. 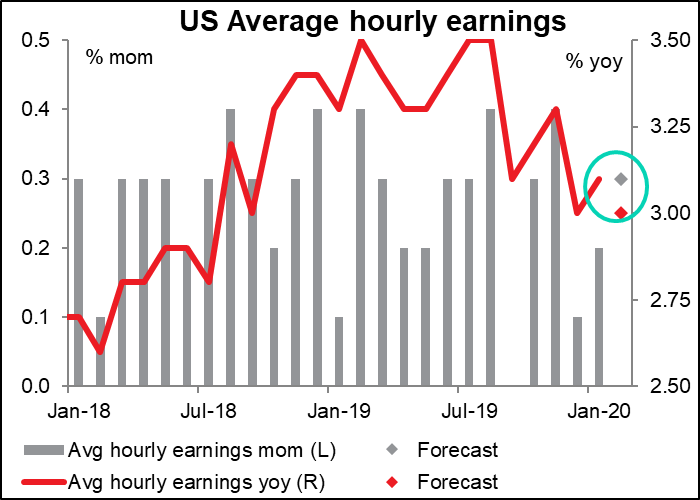 The US trade data comes out at the same time, but usually gets lost in the shuffle. It’s expected to show a small narrowing in the trade deficit but nothing that would suggest a new trend. USD neutral 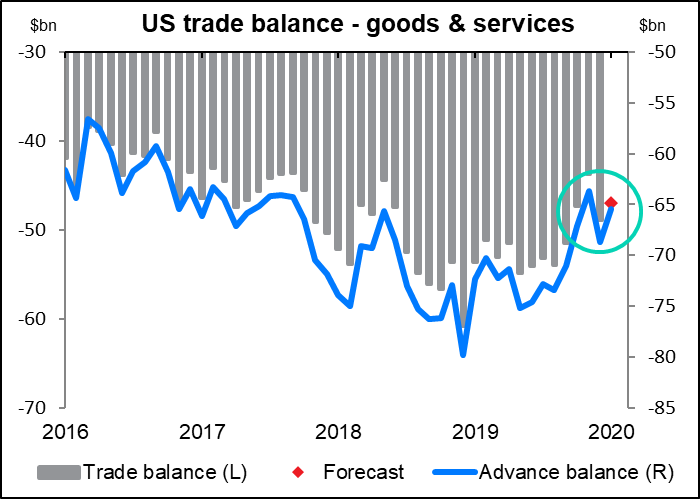 At the same time, we get the same pair of indicators out from Canada.

Canada’s employment data is expected to be mildly weak. The market looks for a below-trend increase in jobs and a slight rise in the unemployment rate, although that would leave it well within the recent range. Neither one is particularly bad though, especially as the increase in jobs in the last two months is in contrast to other data that suggests a weak labor market. Nonetheless, I think the figures are negative for CAD. After the Bank of Canada meeting on Wednesday, when the Bank left open the possibility of cutting rates further, they would need a strong employment data to convince them not to cut rates again. This figure isn’t strong enough to provide such a reassurance to the market. 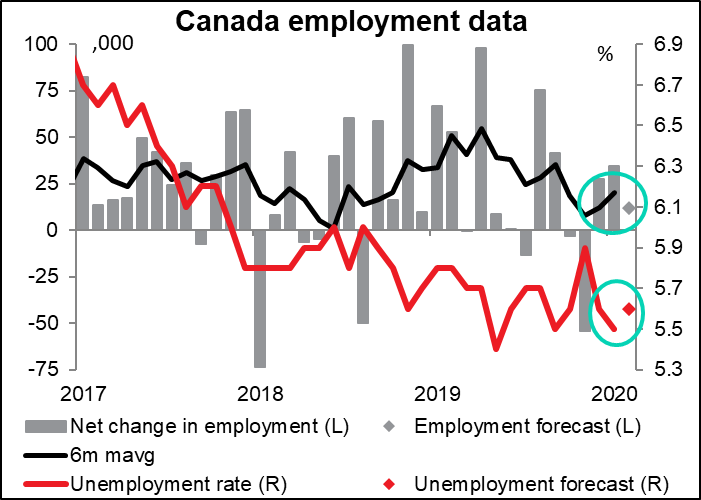 The Canadian merchandise trade is expected to show some widening of the trade deficit, but still be narrower than trend. Falling oil prices make a decline in the value of exports almost inevitable. Nonetheless, the figure is expected to show the deficit is still narrower than it was for most of 2019 and therefore shouldn’t spark any concerns about a renewed widening of the deficit. CAD neutral 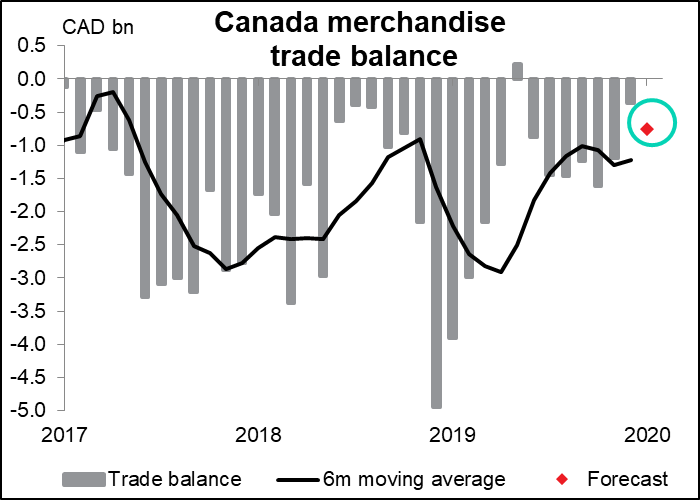 Over the weekend there are a surprising number of indicators.

China trade for February will be closely watched to see just how big an effect the virus had on the country. Because of the Lunar New Year, the figures are year-to-date up to February. They’re expected to show a collapse in both exports and imports.

Japan announces its current account balance and the final estimate (for now, at least) of Q4 GDP.

Japan’s current account surplus is expected to be slightly lower on an unadjusted basis (which seems to be what they look at in Japan) but a bit higher on an adjusted basis. But probably no one will pay attention unless it’s a much bigger change than what’s forecast. JPY neutral 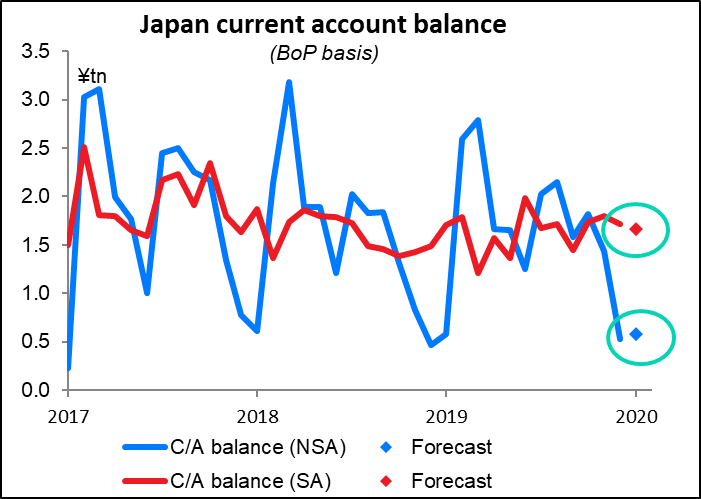 The final estimate of Japan Q4 GDP is forecast to be revised down a bit. But of course everyone is wondering about Q1 and just how hard the country will be hit by the virus. In recent years, Q4 GDP has been revised up by 20-30 bps, but there’s no inherent reason why this pattern has to continue – past performance is no guarantee of future performance, after all. An upward revision could be modestly JPY-positive, but everyone expects the country to fall into recession (two consecutive quarters of contraction in GDP) so I’m not sure it would matter. 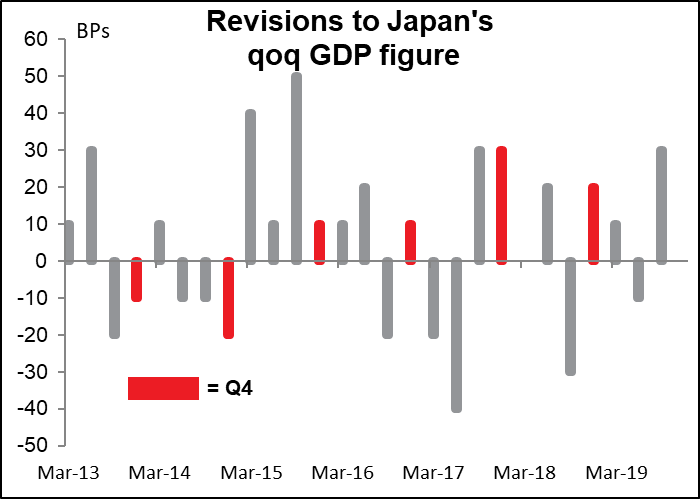 I usually don’t pay any attention to the Eco watchers’ survey in Japan, because the financial markets – or at least the FX market – doesn’t seem to, either. This is a survey of “grassroots” people on the front line of the economy – taxi drivers, restaurant workers, barbers and others mostly in the service sector who work with the public directly and will quickly notice any change in economic activity. 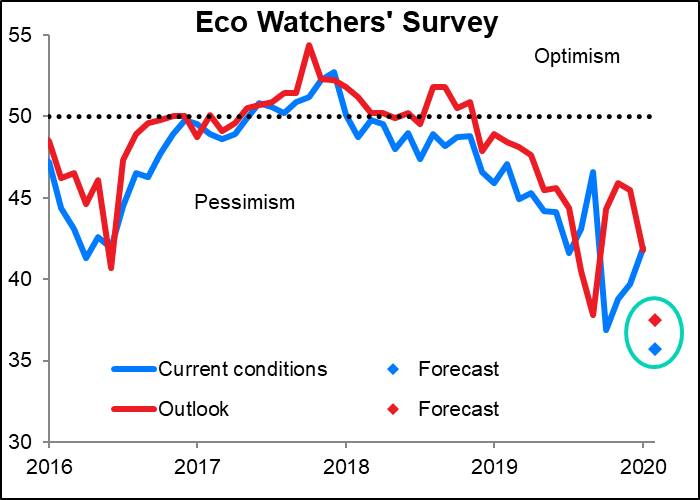 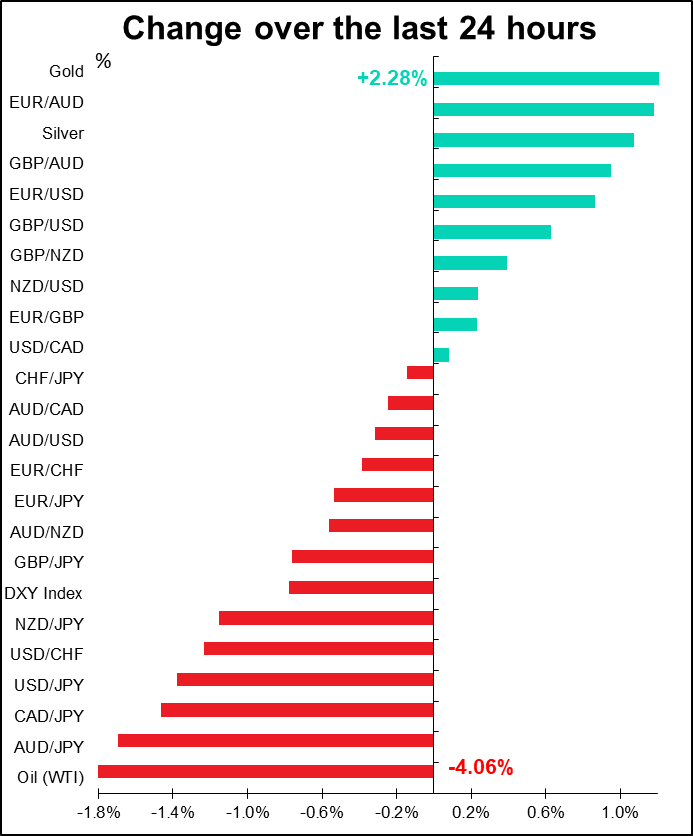