You are at:Home»MARKET PREVIEW»“Risk Off” as Apple Warns on Profits; UK Employment, Japan Trade 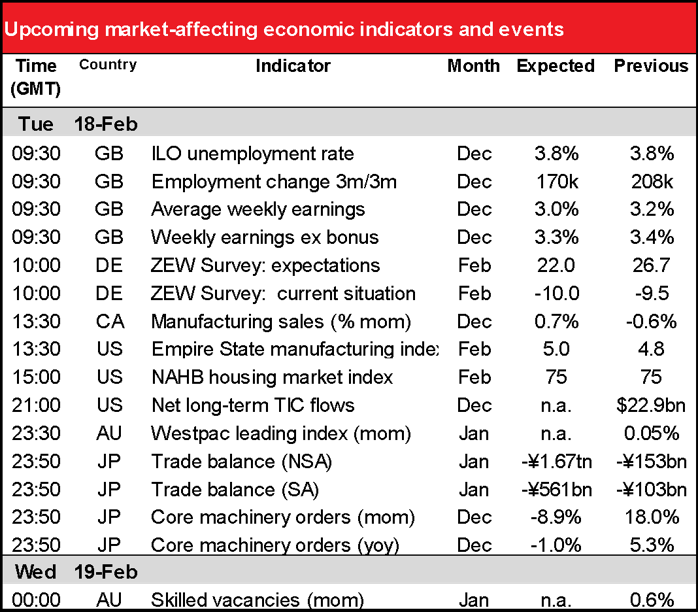 An Apple fell and hit the markets on the head! Apple Inc. warned about disruptions to both production and sales because of the coronavirus outbreak and said it doesn’t expect to meet its revenue guidance fo this quarter. While this should’ve been obvious to anyone with an internet connection and access to a news page, it seems to have shocked the world. In FX, there was a typical “risk off” reaction: JPY and CHF higher, AUD, NZD and CAD lower. US stock markets were closed yesterday so I can’t tell you what happened to Apple’s share price, but most Asian stock markets were down (although oddly enough, Chinese markets fared better than Japan, for example – the Shenzhen index was actually higher). It seems to be that everyone was assuming the virus just meant delayed consumption – today’s purchases would be put off till tomorrow or at worst next week – but if it drags out long enough, it could mean demand destruction, which is negative for everything.

Still, looking at the commodity markets, it appears to me that the markets haven’t given up hope quite yet. 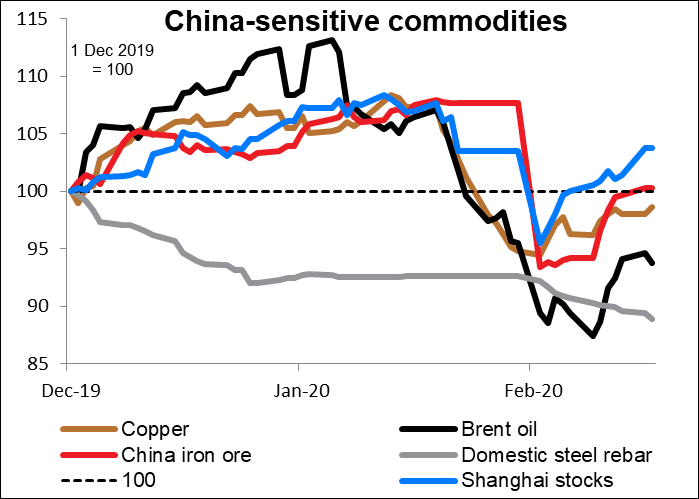 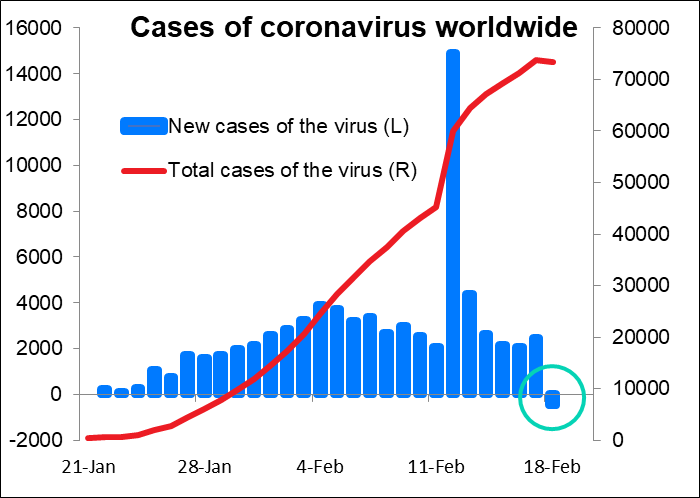 AUD was also hit by the release of the minutes of the latest Reserve Bank of Australia (RBA) meeting, which showed that they reviewed the case for another rate cut at their 4 February meeting, but decided against it because they don’t want to encourage additional borrowing to fuel the already-expensive housing market. Still, the markets were already pricing in a rate cut in the next few months so I don’t think it will alter anyone’s view that much, especially as the RBA maintained a relatively optimistic outlook for the economy. They said the outlook “was for growth to improve.”

GBP also fell as the UK’s new Brexit negotiator, David Frost, started his job by totally rejecting the arguments of his EU counterparts. Europe is arguing that Britain should abide by EU rules as part of any trade deal, but Frost said that this idea “simply fails to see the point of what we are doing.” “It isn’t a simple negotiating position which might move under pressure — it is the point of the whole project.” In other words, there is virtually no overlap between the two negotiating positions. Good luck finding a compromise! I think the overwhelming “cakeism” that’s the basis of the Brexit project is likely to come more and more into focus as these negotiations drag on and GBP is likely to suffer as a result.

For today, I would expect to see some mean reversion in the “risk off” trade. Looking at the Chinese stock markets, it seems that the people closest to the epicenter aren’t as worried as those abroad. I’d expect that confidence to reassure the markets and to see a more “risk on” mood today, with AUD/JPY recovering somewhat, especially as tonight’s Japan indicators are expected to be JPY-negative (see below).

The day starts with the UK employment data. It’s expected to be good. The unemployment rate is forecast to hold at 3.8%, the lowest it’s been since December 1974. Another sbumper above-trend increase in jobs is forecast, even though the previous month’s figure was also quite high. 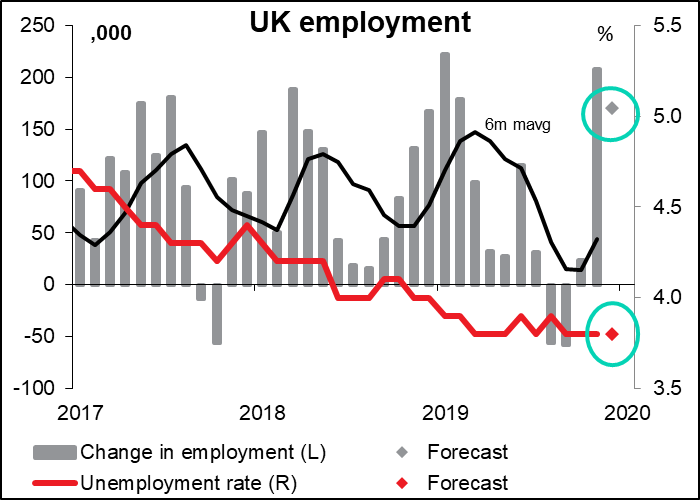 But at the same time, growth in wages is expected to slow. This is something we’ve seen in many other countries – the US and Japan, for example – and no one has a good explanation for it as yet. Low unemployment and tight labor markets just don’t seem to be feeding through to higher wages. In the US, some FOMC members have mused that perhaps growth in wages, rather than the unemployment rate, should be used as the gauge of how tight the labor market is. Central bankers are discovering that their economies can avoid a wage-price cycle with unemployment much lower than they thought possible. 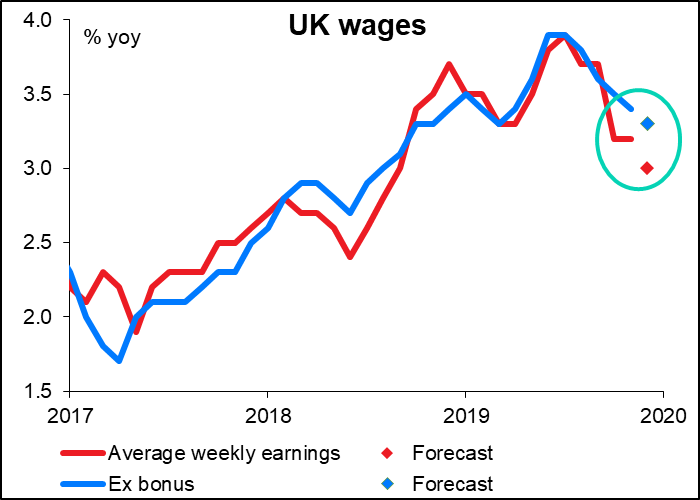 The figures should be seen as positive for sterling. They will corroborate the surprisingly strong (+0.3%) mom increase in GDP in December and go some way towards dispelling the gloom around the UK economy – although Friday’s preliminary purchasing managers’ indices (PMIs) are expected to cast more doubts on the UK recovery.

The ZEW survey of German analysts and economists is expected to show falling optimism. Both the “current situation” and “expectations” indices are forecast to fall. Expectations are not only falling in absolute terms but also in relation to the current situation, meaning that observers are becoming less optimistic about Germany’s future. This growing pessimism about Germany and by extention the Eurozone as a whole is distinctly negative for the euro. 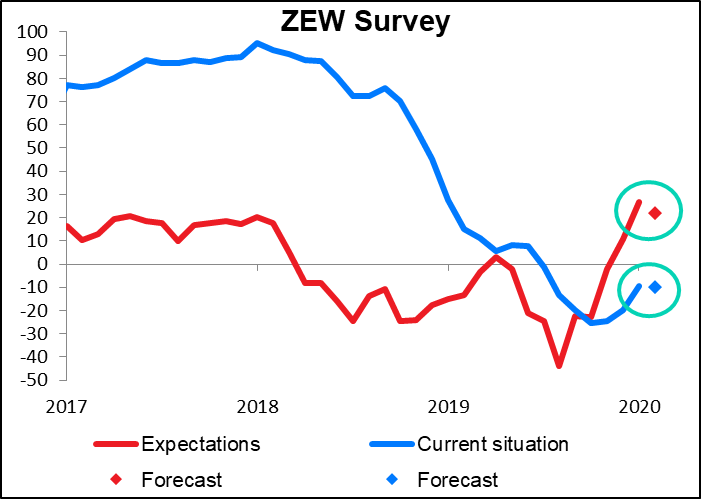 Canada’s manufacturing sales are forecast to show the first mom rise since August as the railway strikes ended. However, not much of a rise is expected, considering that sales have declined for three consecutive months. The forecast +0.7% mom rise isn’t enough to pull the six-month moving average into positive territory. I think this only modest rebound is likely to be either neutral or slightly negative for CAD. 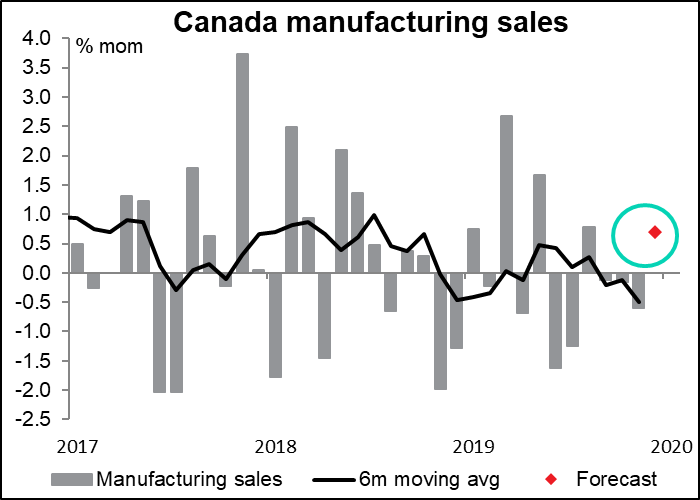 The Empire State manufacturing survey kicks off the series of regional Fed activity surveys, as usual. This is closely watched as the earliest indicator of US activity in the current month. It’s also the most closely correlated of the Fed surveys with the Markit manufacturing PMI, although that’s not saying much – none of them is particularly well correlated with it. It’s expected to show a barely perceptible rise. In the current situation, that’s not bad at all – Friday’s manufacturing PMI is expected to fall slightly. I’d say this kind of result would be USD neutral to positive. 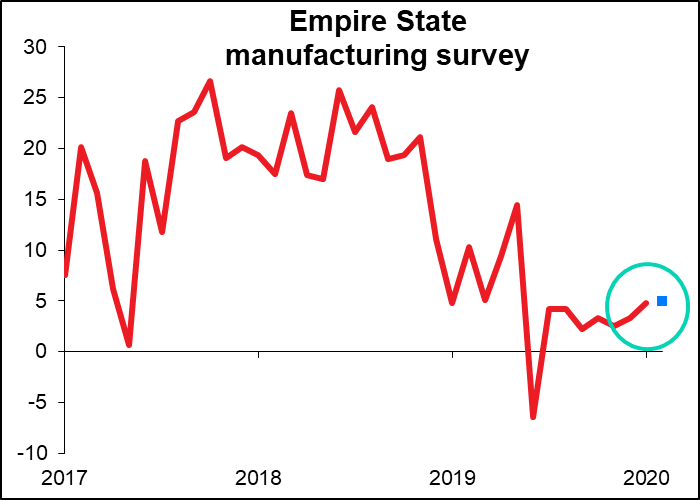 The National Association of Home Builders (NAHB) housing market index is expected to be unchanged at 75. Considering that the record for this index, which goes back to 1985, is 78 hit in December 1998, this is an extremely good level – no doubt bolstered by the low level of interest rates. I’d say even an unchanged number at these levels is positive for the dollar. 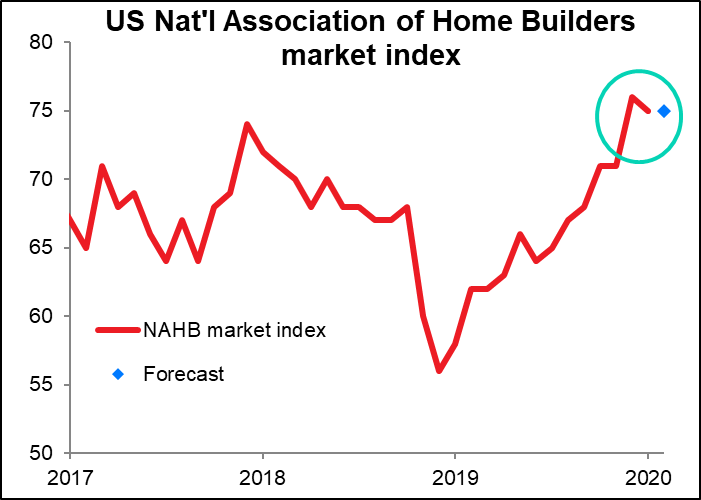 Overnight, Japan comes out with its trade figures and the closely watched but seemingly random machinery orders.

Japan’s trade deficit is forecast to widen sharply, both on an unadjusted and adjusted basis. Some of the decline is no doubt associated with the virus in China, although the impact in this January data is going to be mixed in with impact of the Lunar New Year Holiday 24-30 January, which would have caused a drop in exports to China in any case. The forecast though is for only a slight acceleration in the pace of decline of exports, from -6.3% yoy in December to -7.0%. We’ll have to wait until the February data to see the impact of the virus more clearly. It’s sure to be bad as many carriers (ships & airlines) aren’t even calling at China for the time being. China is Japan’s largest export market, taking 23.4% of the country’s exports (the US is second at 18.5%, and the EU a distant third at 10.7%). JPY negative 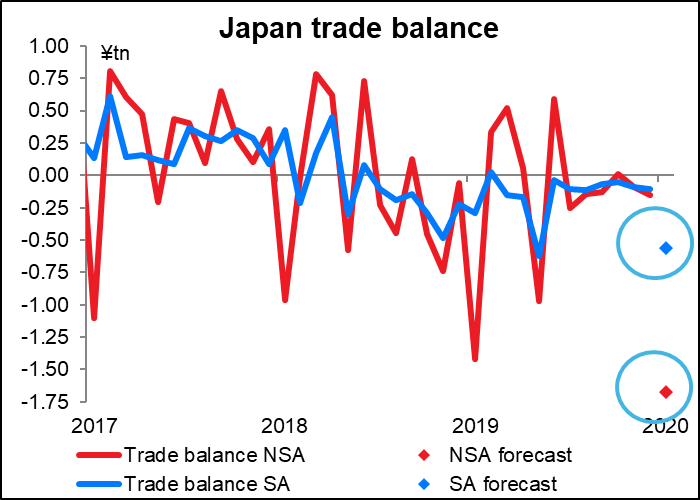 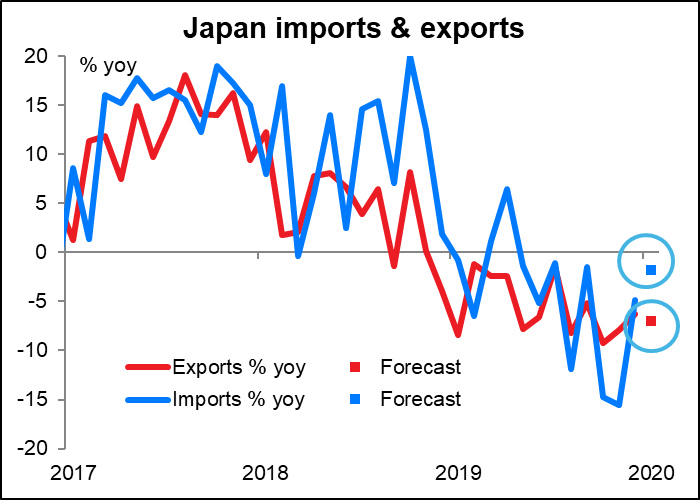 Meanwhile, private core machinery orders (private-sector orders excluding ships and electric power company orders) are expected to fall almost 9% mom in December, but this decline is largely due to a huge order in November that obviously won’t be repeated. The yoy rate of decline is expected to narrow to -1.0% from -6.1% in October, which may indicate a rising trend. 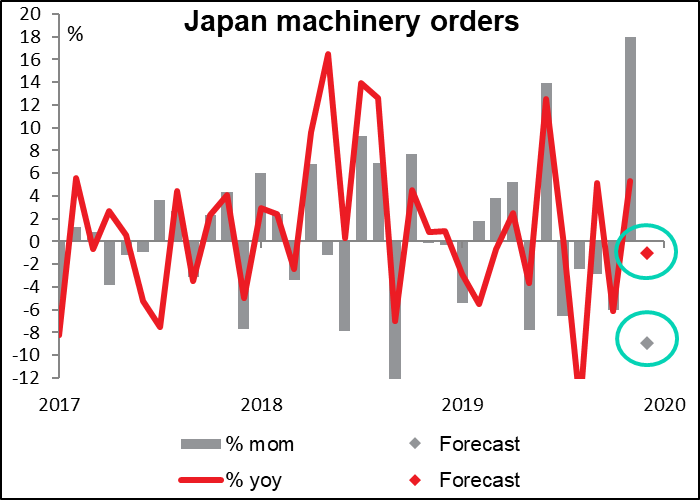 But of course with foreign orders accounting for about one-quarter of total  core machinery orders, the figures are likely to plummet in the next few months. 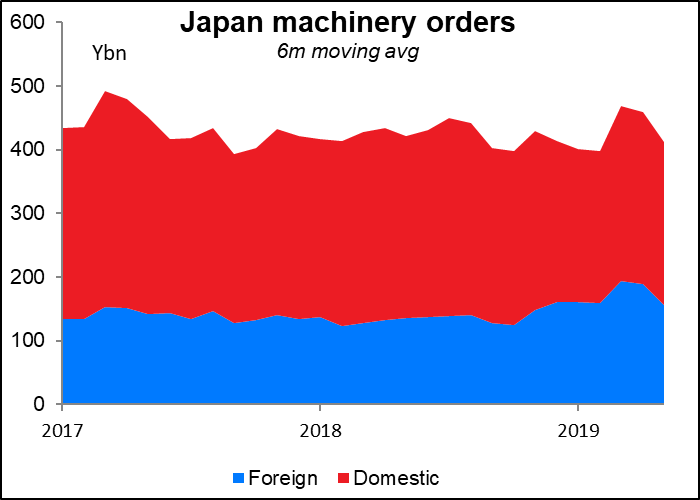 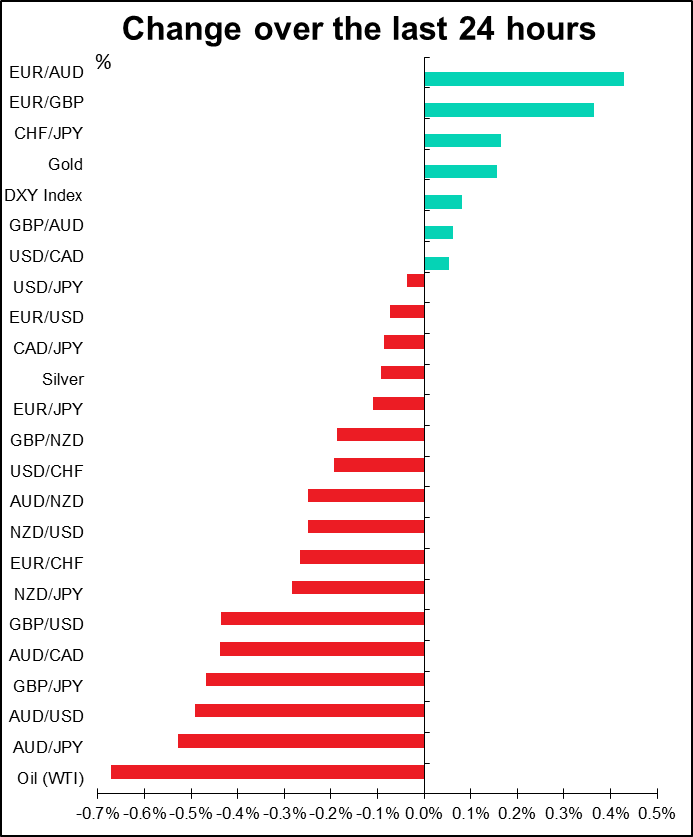