You are at:Home»MARKET PREVIEW»Risk Appetite Comes Back a Bit as Official Moves Start to Calm Market

We’ve seen a veritable parade of central bank and finance ministry (Treasury) actions around the world over the last few days to address liquidity and tightening financial conditions, on the one hand, and the fall-out of the need to shut down the economy temporarily, on the other. I think the most effective were the 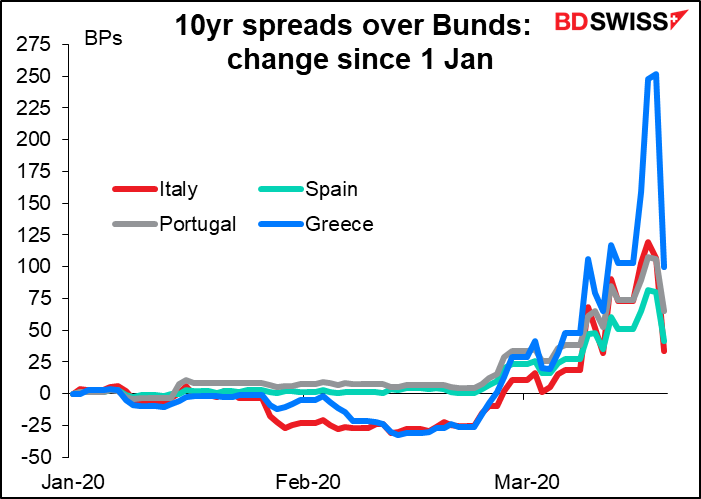 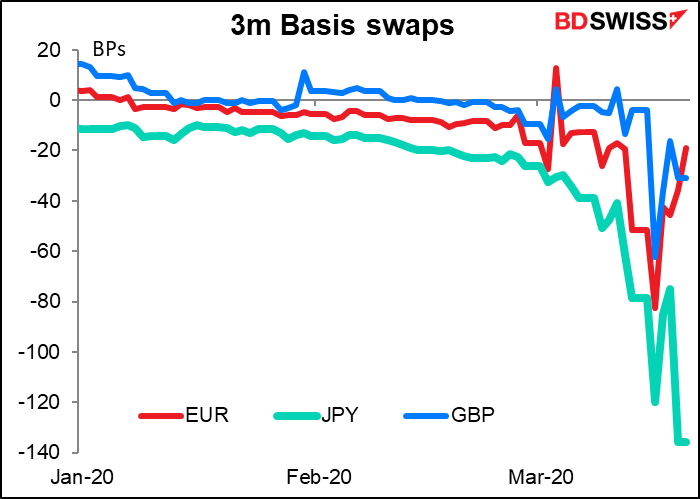 The actions have managed to stabilize the markets somewhat. US stocks closed up 0.5% yesterday in the first move of less than ±1% in 13 days. Futures indicate the S&P up about another 0.3% this morning. Most Asian markets are higher too, some by significant amounts (+6.6% in Taiwan, +4.9% in South Korea). The currency markets are showing a definite “risk on” mood, with AUD up and JPY down.

The moves allowed the FX market to reverse some of the recent action. The currencies that gained the most overnight were generally those that lost the most over the previous week. The biggest winner though (not shown) was the South Korean won (KRW), which gained thanks to the reopening of the swap facility between the Fed and the Bank of Korea. That’s a perfect example of how the establishment of the swap facilities should take some of the pressure off of the funding market for now. 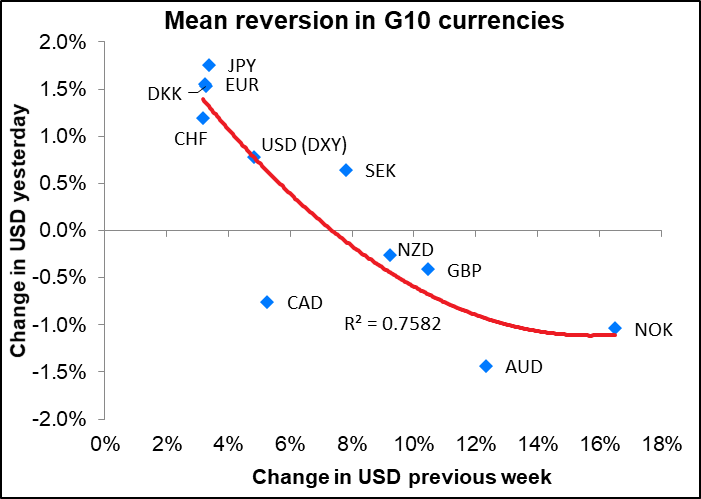 We saw some terrible US economic indicators yesterday, and we’re going to get even more in the future. Initial jobless claims surged from 211k to 281k (220k expected! Hahahah!) while the Philly Fed index showed a record drop of 49.4 points to -12.7 from 36.7 (+8.0 expected). We can look forward to more misses like that (or worse) as no one really knows how this unprecedented event is hitting the economy.

A word about oil

The wild volatility in oil continued. After hitting the lowest close since 2002, WTI futures sprang back with a record 23.8% gain after Trump said something about intervening in the price war between Saudi Arabia and Russia. “At the appropriate time I’ll get involved,” he said.

Trump could lean on Saudi Arabia by using the US security arrangements for the Kingdom as leverage. However, given his sycophantic attitude towards the Saudis (remember Jamal Khashoggi?) I doubt if he’d be willing or even able to make waves there (although maybe if it’s in Russia’s interest he could be convinced to do it.) He’s already ordered the Strategic Petroleum Reserve to buy up as much as 77mn barrels of oil over time. That sounds like a lot, but if Saudi Arabia goes ahead with its plan to increase production by more than 2mn b/d, it’s only 38 days of Saudi Arabia’s excess production. What happens on Day #39?

I was amused to see that oil industry leaders wrote to Trump asking for his help ensuring “restoration of a functioning, stable, global market for oil.” What they really mean is that they want him to resurrect the cartel that was artificially holding down production among low-cost producers and propping up prices so that their unlimited production of high-cost oil can be profitable. Welcome to Capitalism American Style, where free-market capitalism is only for workers and government-run socialism is only for companies.

One thing that would help oil:  apparently, Texas’ main oil regulator is considering whether the state should curb crude production. It hasn’t done that since 1972, but it is legally possible. In other words, the US could surreptitiously join OPEC+.  That would possibly do the trick. But is it politically feasible?

Exante Data, a firm formed by former Goldman, Sachs FX guru Jens Nordvig, published the following graph of US virus cases. Note the exponential curve. He comments:  “Not pretty, and testing is still in the ramp-up phase.” The sudden increase is probably due to more testing, not more people getting sick. Nonetheless, it points the way for what we can expect in the next few weeks in the US. As physics great Prof. Al Bartlet said, “The greatest shortcoming of the human race is our inability to understand the exponential function.” 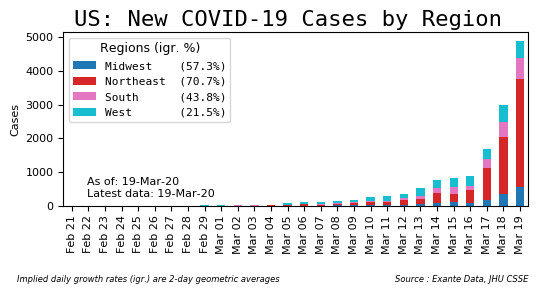 Another relatively quiet day for indicators.

Bank of Finland Gov. and ECB Governing Council Member Olli Rehn will speak at a press conference on the economic impact of the coronavirus pandemic in Finland and the world. My guess is he’ll think it’s bad. Just how bad is of some interest to the markets. ECB President Lagarde Wednesday estimated that it might cause EU output to contract by around 2% a month for a total hit to output of 5% or so over the duration of the lockdown, but that was a second-hand report. We’ll be interested in hearing a first-hand report of what the ECB is thinking – although their thinking is just a guess, just like everyone else’s.

Canadian retail sales are expected to have risen in January. Wonderful. I’m really happy for them. Good job! 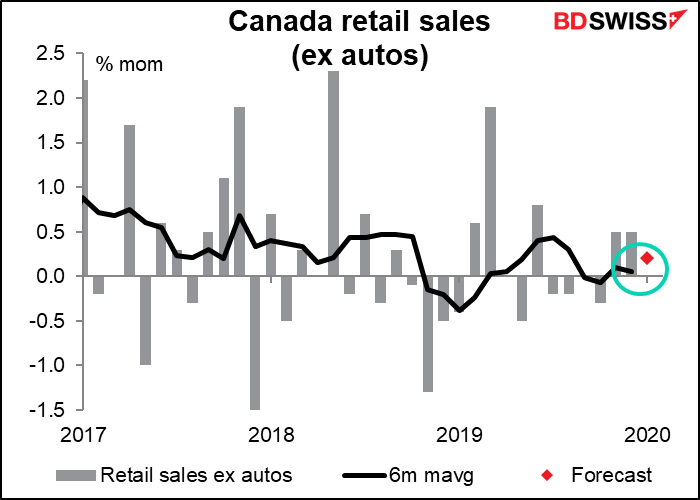 However, I’m not sure it matters. With Canada’s Western Select oil was recently trading below $10 a barrel, I’m not sure January’s data is particularly relevant anymore. I haven’t seen an oil price with a one-digit handle since…well, for WTI the last time was December 1973. Western Select trades at a spread under WTI (currently $13.40 under, more or less) so it’s not like WTI is trading in single digits, but still… 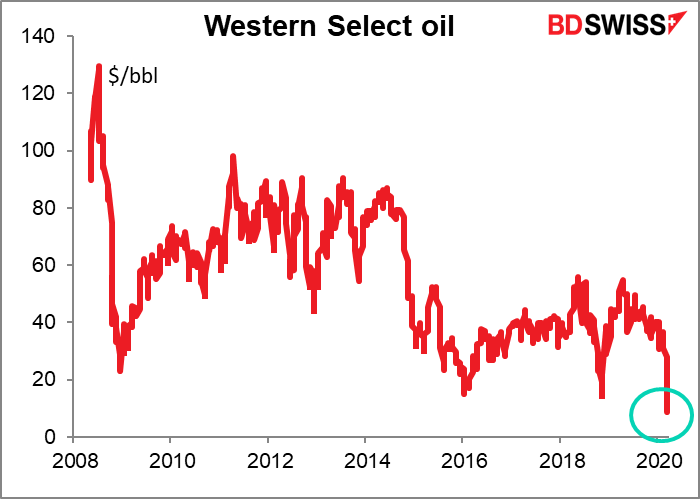 Similarly, US existing home sales are expected to do pretty well – in fact they’re forecast to rise from the previous month. New home sales, which come out next week, are forecast to fall a bit, but that’s from January’s rate, which was the post-GFC high. (It dawns on me, we’re going to have to think up another term for “crash,” to differentiate which crash we mean:  the 2008/09 Global Financial Crisis or the 2020 Coronavirus Crash.)  However, I’m not sure what this portends for house sales going forward. What I’ve seen on Twitter – which admittedly is not a scientific survey by any means – is that no one is looking at houses nowadays. What with cities on lockdown and layoffs soaring, I don’t know how many people are looking to buy a new house just now. House sales are usually a function of consumer confidence and that’s bound to take a hit. 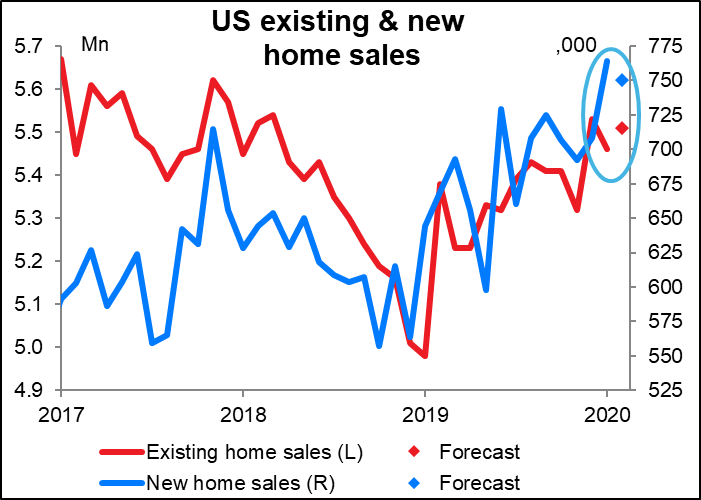 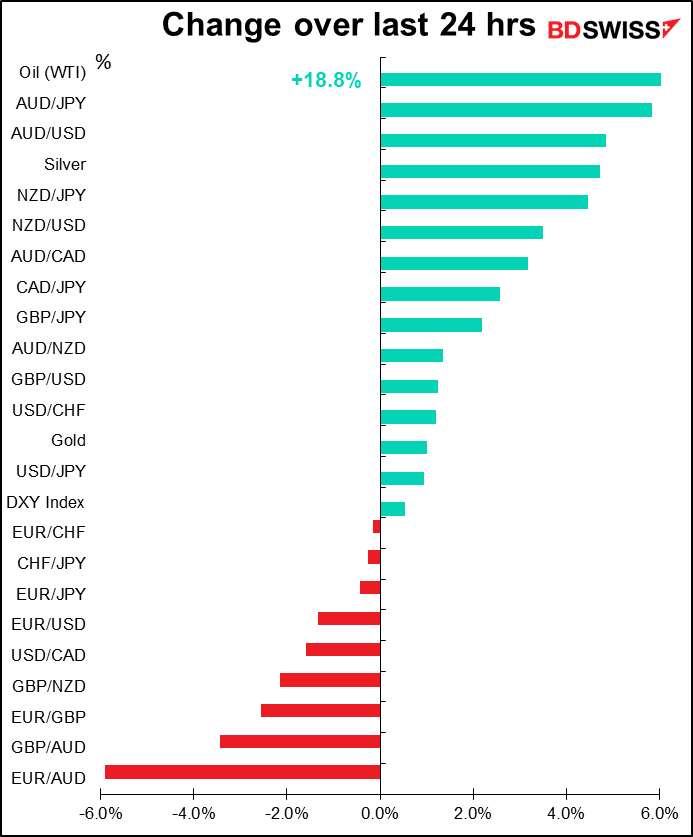