You are at:Home»MARKET PREVIEW»RBA Cuts Rates Ahead of G7 Reaction to Virus 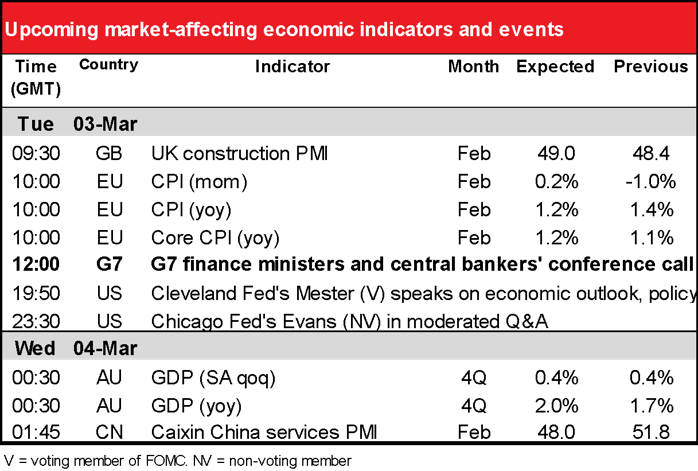 There’s been a huge “risk-on” move in anticipation of some sort of coordinated action to support the global economy in the face of the COVID-19 economic shock. The G7 finance ministers and central bankers will hold a global conference call today at 1200 GMT to discuss their response to the virus. French Finance Minister Le Maire Monday said there will be “concerted action” so that their responses are as effective as possible. A communique will apparently be released afterward.

Central bankers have been preparing us for this. On Friday, Fed Chair Powell said the virus “poses evolving risks to economic activity.” He said the Fed is “closely monitoring developments” and will “act as appropriate to support the economy.” That’s central banker speak for “we’re scared ******** about this and are going to cut rates ASAP.” Then on Monday, Bank of Japan Gov. Kuroda said the BoJ would “strive to provide ample liquidity and ensure stability in financial markets.” The UK government confirmed that it had held talks with the Treasury and the Bank of England. And in the evening, the European Central Bank (ECB) released a statement saying that, like the Fed, they “stand ready to take appropriate and targeted measures, as necessary and commensurate with the underlying risks.”

If you remember, they did this back in October 2008 as well, when six central banks cut rates at the same time (and the Bank of Japan expressed its “strong support” of the actions.)  You can read about it here:  FOMC statement: Federal Reserve and other central banks announce reductions in policy interest rates

However, a Reuters story said that the group will simply pledge “to work together to mitigate damage to economies” from the virus. The statement will apparently say nothing about specific measures, such as rate cuts or increases in spending. The language is still under discussion though and subject to change, Reuters said.

Which countries have the potential to cut rates? All of them, I’d say, except Switzerland maybe. Clearly some have more room to cut than others. 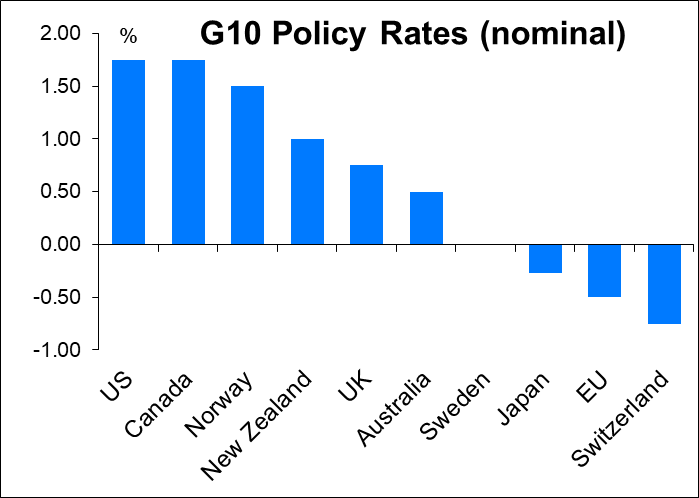 The market expects all the major central banks to cut rates this year (Switzerland may be an exception – we don’t have data for them). the Fed to cut by 25 bps at its March meeting and again another 25 bps cut at its April meeting. But it could just choose to cut by 50 bps at the March meeting. They see the ECB cutting by 10 bps at its April meeting and another 10 by the end of the year. (Note: the BoC data is correct – I have no idea what the problem is there.) 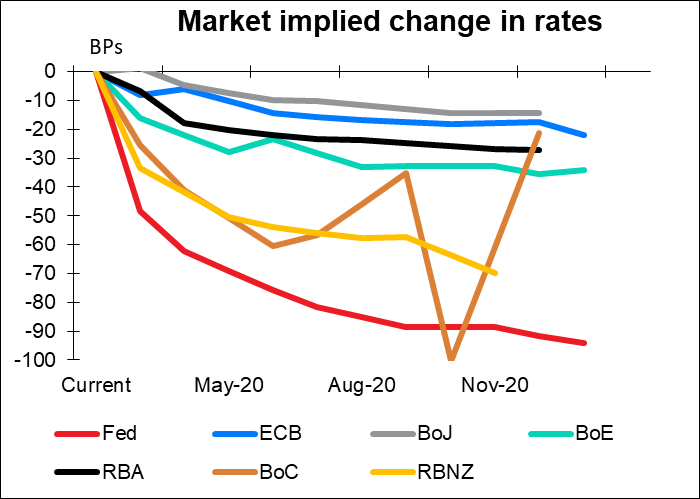 We got a hint overnight of what we might see when the Reserve Bank of Australia (RBA) cut rates by 25 bps to 0.50% and said it’s prepared to cut further if necessary. RBA Gov. Lowe has previously said that 0.25% — one more rate cut — is their effective lower bound and after that they would start quantitative easing. Australia is also taking fiscal measures to support the economy:  “The Australian government has also indicated that it will assist areas of the economy most affected by the coronavirus,” the RBA statement said. The RBA also hinted at global intervention:  “In most economies, including the United States, there is an expectation of further monetary stimulus over coming months.”

What can a central bank do against a virus? Nothing, obviously. But many people in the US at least don’t get paid holidays or even sick days – if they can’t get to work, they don’t get paid and they therefore can’t pay their bills. You could envision a cascade of bankruptcies and foreclosures across the country. Banks can hold off on such measures, but they need money too. Monetary injections can help to float the economy until the pandemic is over.

It’s a bit much for me to describe in this small comment the possible macroeconomic effects of the virus – why not read someone who’s done a serious study of the matter? I refer you to Prof. Simon Wren-Lewis, Emeritus Professor of Economics and Fellow of Merton College, University of Oxford, who did a formal study of the issue a decade or so ago. You can read his up-to-date assessment on his blog at “The economic effects of a pandemic.” He basically says that it’s a short, sharp shock and activity quickly bounces back, assuming that the virus dies down in a few months, as it did with the SARS virus in 2003. But if people start altering their behavior – as they clearly are now – it can be a serious rupture of demand for many industries. People who want to buy a car can delay buying for a few months and then go buy it, but someone who stops going out to dinner or to the pub (“social consumption”) for a few months isn’t going to go out to dinner every evening to make up for it once the scare is over.

Could conventional monetary or fiscal policy offset the fall in social consumption? Only partially, because the drop in consumption is focused on specific sectors. What is more important, and what we didn’t explore in the exercise, is what would happen if the banks failed to provide bridging finance for the firms having to deal with a sudden fall in demand. The banks may judge that some businesses that are already indebted may not be able to cope with any additional short term loans, leading to business closures during the pandemic.

And just to show how widespread the deception is about this event:  the US Centers for Disease Control (CDC) have stopped showing on their website the number of people tested for COVID-19 or dying. A black sharpie drawn on a hurricane map is bad enough, but this level of disinformation can be dangerous.

I didn’t put it on the schedule, but today is Super Tuesday in the US – the day that 14 states hold their primaries for the Democratic Party candidate for President. The field started with over 20 people in it, if I remember correctly, but there are only four left standing now – it’s Joe Biden, Bernie Sanders, Elizabeth Warren, and Michael Bloomberg (all older than former President Bill Clinton is now, by the way). I think it’ll come down to Biden vs Sanders. Two possibilities are being discussed:  1) what happens if no one gets a majority of the delegates? And 2) what happens if one person has more delegates but another one got more votes?  It should be interesting.

The day starts with the UK construction PMI. Now that Markit is producing preliminary versions of the UK manufacturing & service-sector PMIs, I’m not sure this one has the same impact that it used to. Nonetheless, the manufacturing PMI made a surprise leap in February, and the service-sector PMI was down only a little. A rise in the construction PMI may cement (!) the idea that the UK economy was in good shape before the COVID-19 scare took hold. GBP-positive 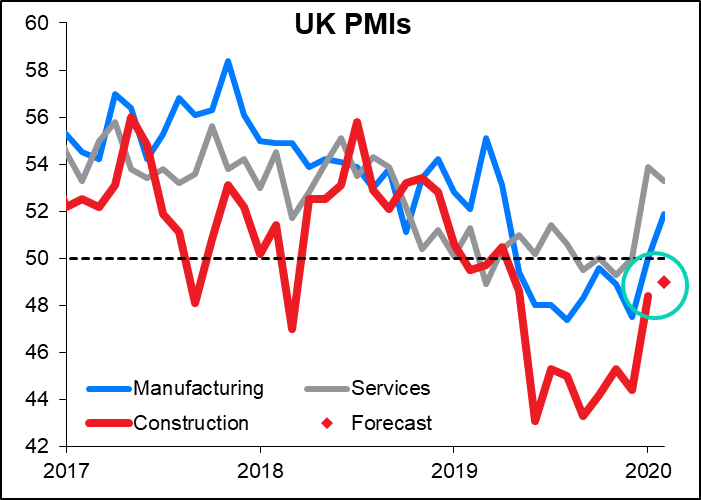 The EU-wide CPI is expected to show headline inflation slowing a bit and core inflation accelerating a bit so that they meet – at a rate below the ECB’s target of “close to, but below, 2%.” 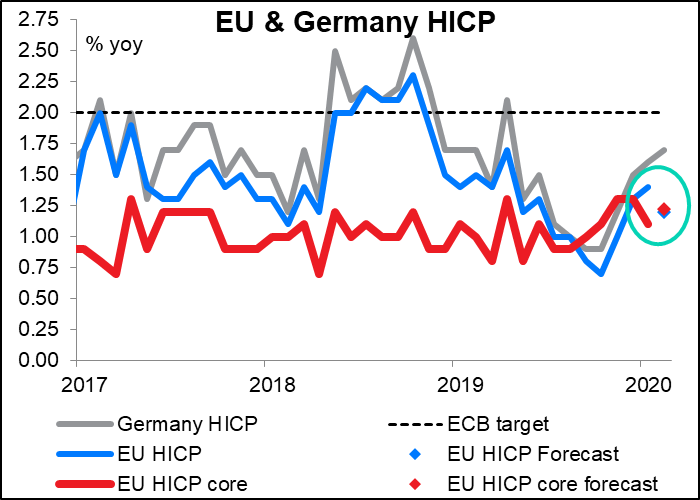 This is of course the last inflation data that they’ll get before next week’s ECB meeting (12 March) so the sluggish inflation may add to the debate among the members – given that they are already so far below their target inflation and given that the COVID-19 virus poses a threat to the economy, do they need to loosen rates further?  The market is saying “yes” – investors are predicting two 10 bps rate cuts this year – one at the April meeting and a second one by year-end. And as mentioned above, they released a statement last night that said they “stand ready to take appropriate and targeted measures.” This added ammunition for the doves is likely to be negative for EUR. 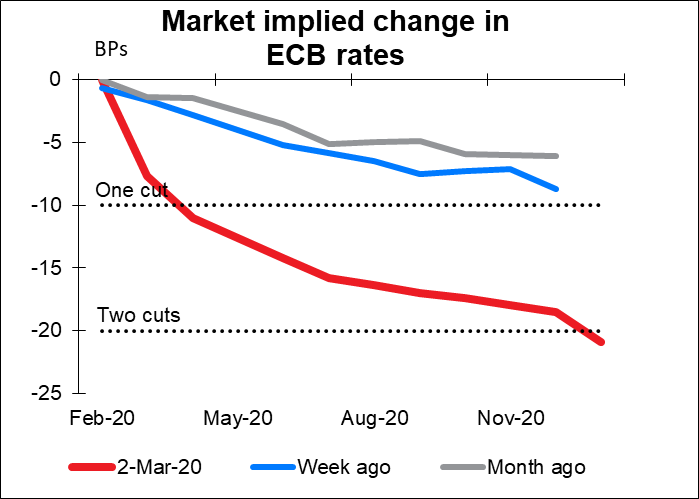 Overnight Australia releases its Q4 GDP figures. These are not only later than most other countries, but also the data is of course thoroughly pre-virus, and since Australia is one of the countries hardest hit by the virus (39% of exports go to China, not to mention all the Chinese tourists and students who come to Australia), these figures from the past aren’t going to tell us much about the present or the future. Moreover, after we just had a Reserve Bank of Australia (RBA) meeting overnight at which they cut rates and promised more if necessary, does anyone really care what happened last quarter? There will be some interest in seeing how the components of GDP performed – is investment falling? How’s consumption doing? – to determine how resilient the Australian economy might be in the face of such an unprecedented shock, but these are largely of historical interest. AUD neutral 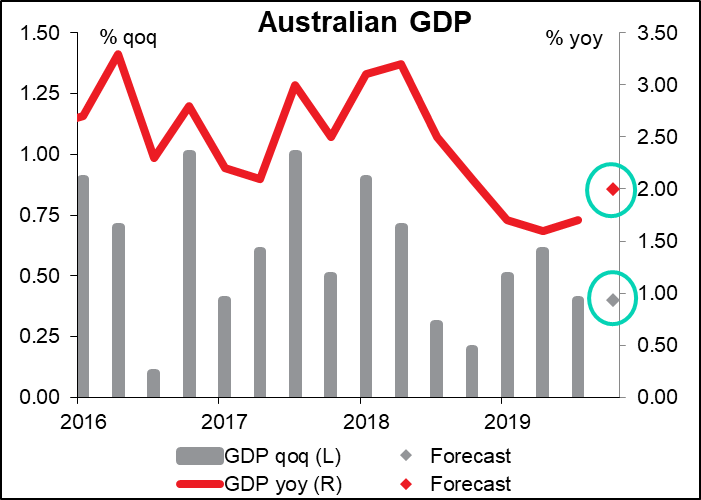 Finally, Caixin/Markit release their service-sector purchasing managers’ index (PMI) for China. These so far have been disastrous – worse than in the Global Financial Crisis of 2009. The “forecast” for this is that it will fall to 48.0 from 51.8, but who knows? Who has any idea? We shouldn’t imbue these “forecasts” with any predictive value whatsoever – they’re just guesses. The official non-manufacturing PMI collapsed to 29.6 from 54.1 – why should the Caixin/Markit version do that much better? In any case I think a disastrous result is already discounted in the market, so I can only think that if it turns out to be not as terrible as the official version, it might spark a bit of “risk-on” feeling. But that’s a long shot. 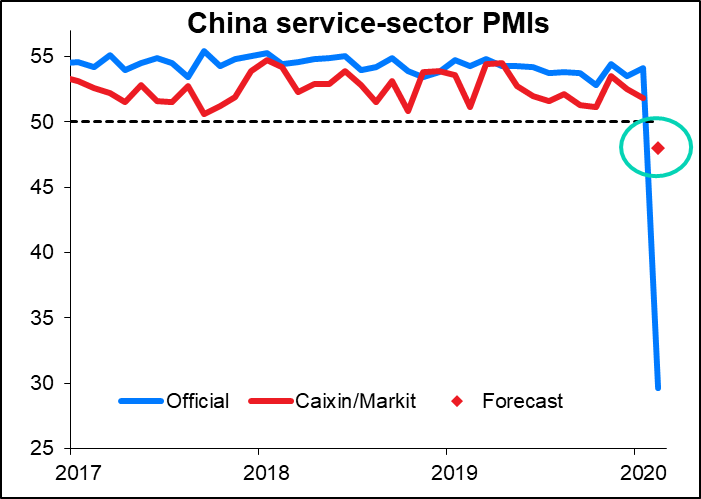 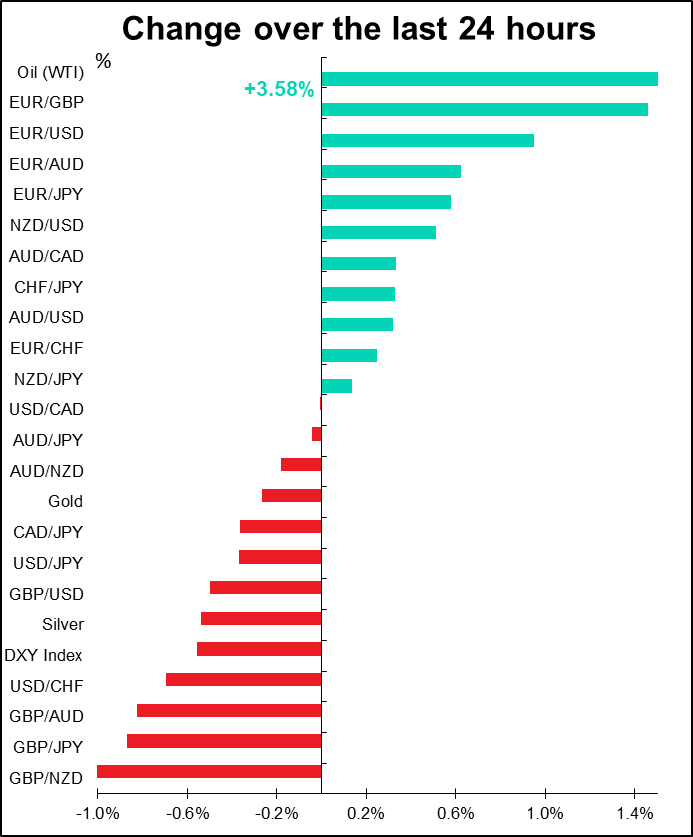