You are at:Home»MARKET PREVIEW»Oil Lower as Traders Rush to Cover Expiring Contract; Nothing Major Until Tomorrow’s UK Employment Data 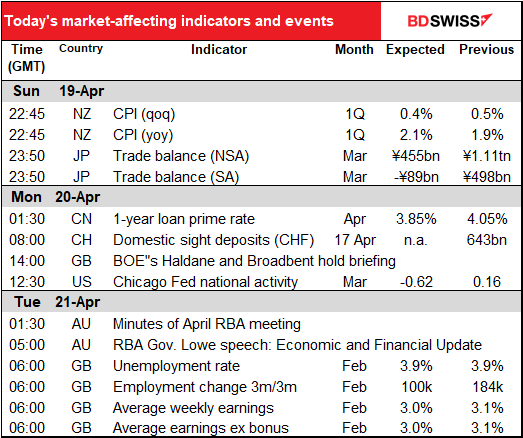 Collapse of WTI! The near contract (May) for West Texas Intermediate (WTI), the US benchmark crude, plunged some $4.43 or 22.5%, from its levels Friday morning. Brent crude was down only 64 cents or 2.3%. The details are a little bit less dramatic however and are largely technical. For the prices, everyone uses the nearest futures price, which for WTI is currently the May contract but for Brent is June. The May WTI contract expires on Tuesday, and anyone who is still long May futures will have to take delivery in Cushing, Oklahoma. But storage at Cushing is rapidly filling up and traders may not be able to find any place to put the oil if they do take delivery. They are therefore desperate to get out of their contract, and this is causing massive selling.

The graph below shows the difference in price between the nearest contract and the 2nd nearest. Before this month, it averaged 24 cents, with a range of ±62 cents, so normally it would be between -38 cents and +86 cents. Today it’s $8.57!!!! You can see what an anomaly this is. The fall in the price of the June WTI contract from Friday’s close was a significant $1.38, which is -5.5% — not great, but not 22.5% either. This should all get back to normal by Wednesday.

Given the big fall in North American oil prices, it’s no surprise that CAD is the biggest loser on the day. NOK was also lower.

On the other hand, NZD was the best-performing currency – it went shooting up after PM Arden decided to start easing the lockdown restrictions in a week. New Zealand only had nine new cases a day recently. 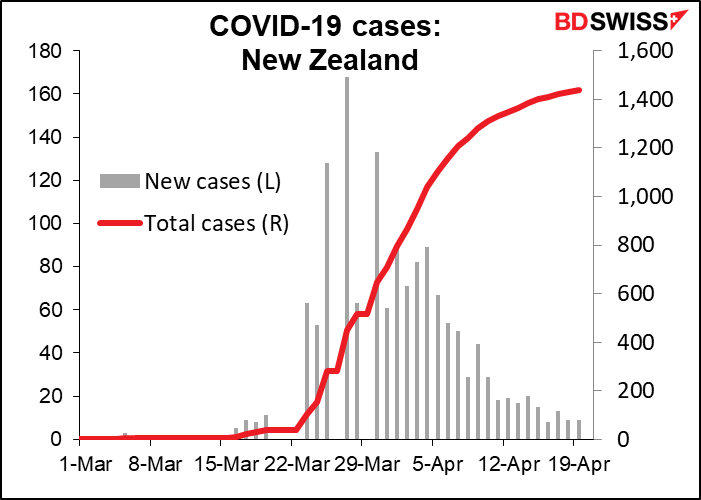 Elsewhere, currencies were moving in a relatively narrow range. US stocks closed up significantly higher (+2.7%) yesterday, but this morning Asian stocks are mixed with few only a few indices showing moves of more than ±1%. There’s therefore no big “risk on” or “risk off” impetus to trading.

Speculators finally got the message about oil prices and reduced their long MXN and RUB positions, although they also trimmed their short CADs.

They raised their long JPY but cut their long CHF positions. The two do tend to follow each other over time, but certainly not on a one-to-one basis. 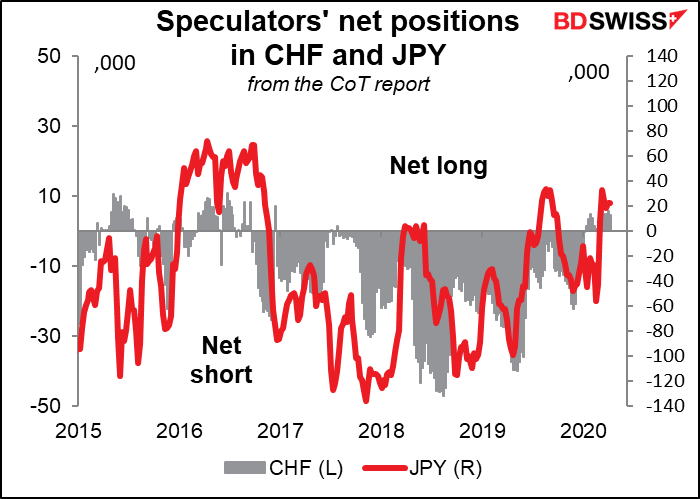 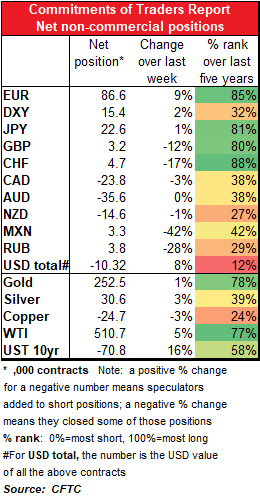 Not much out during the European day today.

The weekly Swiss sight deposit figures have shown continued intervention by the Swiss National Bank recently, although at a lesser scale than during the week of 27 March. That makes me think they are doing more of a “smoothing” operation than trying to hold the line for EUR/CHF at 1.05. With EUR/CHF sitting right at that line, we’ll have to see whether they back off a bit this week or increase their intervention. That will give us a clue to their intentions, which may act as a guide for us. 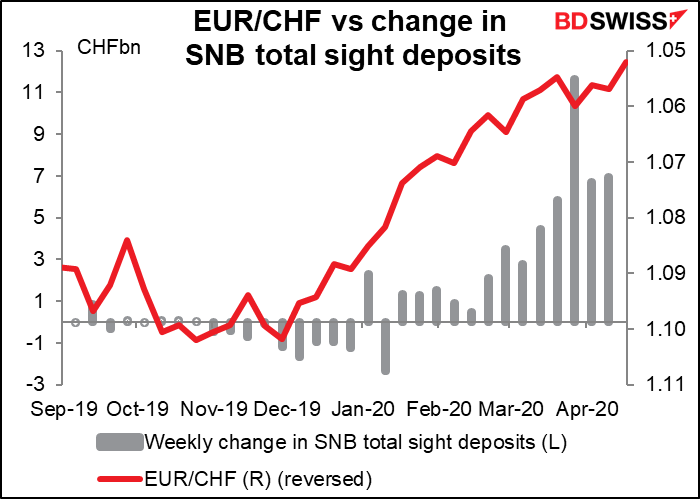 The Chicago Fed National Activity Index is for March, and besides, it’s compiled from data that are previously announced, so it’s not going to shock anyone. Besides, it’s incredibly erratic even under normal conditions. It’s forecast to decline sharply but not to as low a level as was hit in February last year (when people were expecting a downturn that never came). 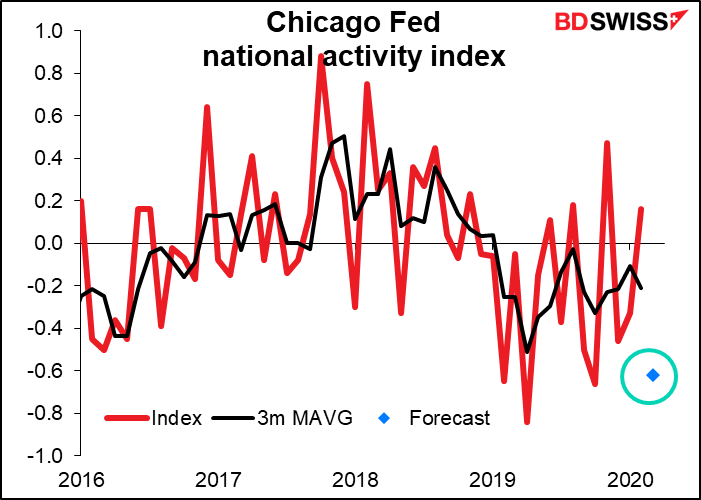 Overnight we get the minutes from the last Reserve Bank of Australia (RBA) meeting, when they “reaffirmed the targets for the cash rate and the yield on 3-year Australian government bonds of 25 basis points, as well as the other elements of the package announced on 19 March 2020.” They didn’t make any new moves at that meeting, so I don’t expect much new to be revealed in the minutes. We may hear some hints of things to come from RBA Gov. Lowe’s speech later in the day, but I don’t expect anything besides “we’re prepared to do more if necessary.” As the virus seems to have peaked in Australia, my guess is that they’re going to be on hold until further notice. 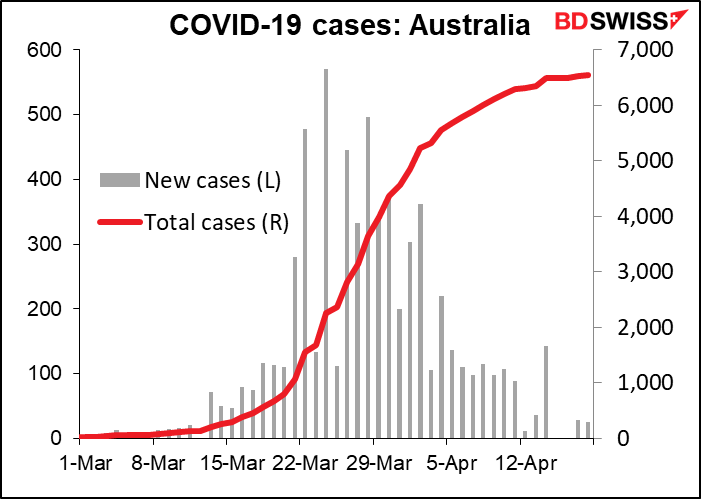 Then in the early European day Tuesday, at about the same time as I’m going to be pushing the “send” button on Tuesday’s report, Britain will announce its employment data for February. The data are expected to be hopelessly out of date, in that they’re forecast to show a rise in employment in line with the recent trend and no change in the unemployment rate. This is clearly not possible, so everyone is likely to ignore the data entirely. Wages are expected to grow at about the same as the recent rate. We’ll see about March. 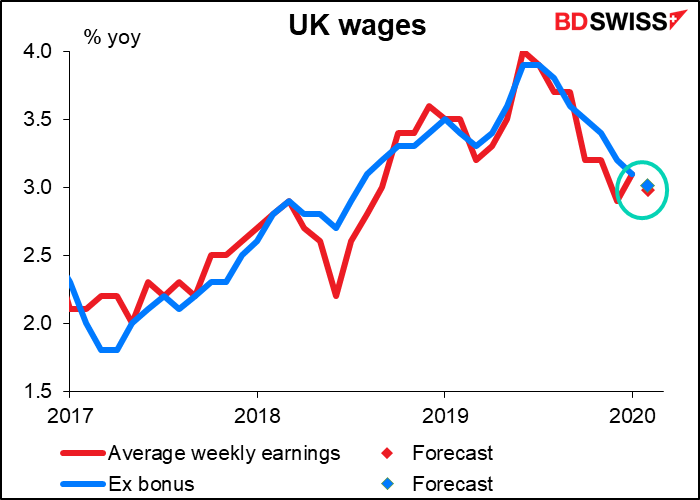 A tweet from the FT’s Gideon Rachman:  “If only we could get herd immunity against idiocy. Grinding my teeth in the supermarket queue as a guy behind me loudly asserts that this is all a government conspiracy, a “plandemic not a pandemic”. Insists he will refuse to be vaccinated.” I feel the same way when I see these marches of people in the US demanding the right to get a haircut. People saying that “a higher power” will protect them from the virus. One guy complaining about the “Orwellian” rule because his company insisted on taking the temperature of everyone going in and out of the building. When I asked wasn’t he happy to know that the person next to him in the elevator didn’t have a fever, he just said “no.” I can’t understand what these people are thinking.

At last, some media are starting to point out that the Emperor has no clothes. Salon ran a story saying Trump is insane: And it’s time for leading Democrats to say that out loud Given his increasingly bizarre performance daily in the virus briefings, one can only wonder why this isn’t a front-page topic on every newspaper. 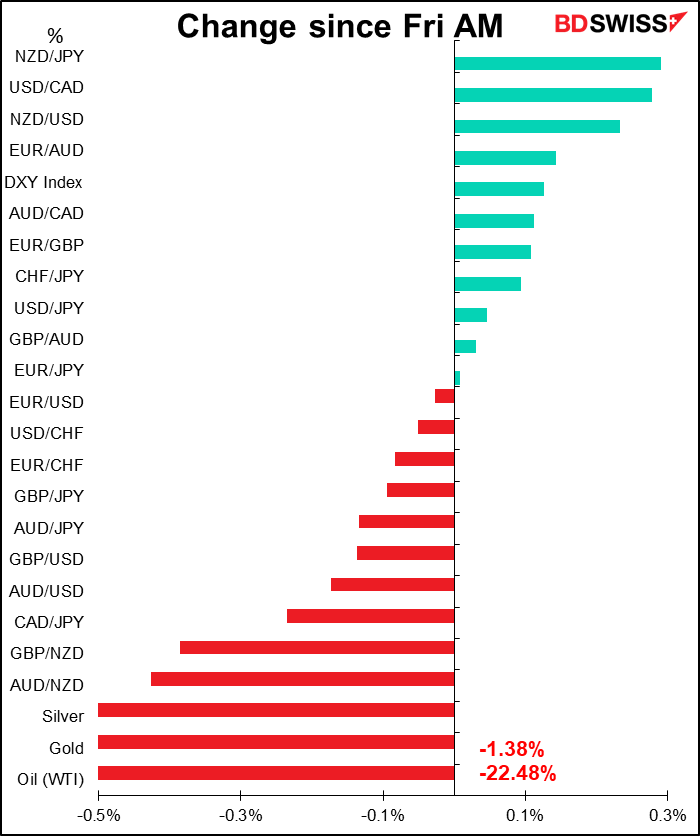