You are at:Home»MARKET PREVIEW»NZD up on CPI beat, EUR Down on Nothingburger ECB; Preliminary PMIs 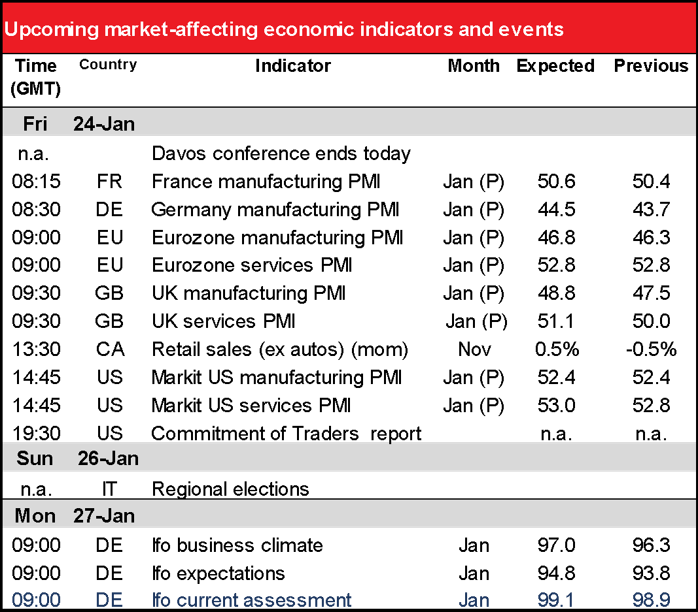 Yesterday’s European Central Bank (ECB) meeting was indeed the nothingburger that I predicted. There was little news besides the terms of the Strategic Review, and even that was hardly earth-shattering. The only change is that the risks to the Eurozone economy “have become less pronounced as some of the uncertainty surrounding international trade is receding.” Note that they say “some of the uncertainty,” meaning that they still aren’t sure that the “Phase One” agreement between China and the US will eventually lead to the full resolution of that conflict. Meanwhile, the stance of policy was completely unchanged and there was no suggestion of any future change, either.

Apparently, some people were expecting a more confident statement. Just reiterating their existing stance and suggesting that policy is hold caused some disappointment, reflected in the lower EUR.

As for the policy review, the press release describing it was somewhat vague. They mentioned what they might be examining, but gave no hint of any alternative methodologies that they might consider. “The quantitative formulation of price stability, together with the approaches and instruments by which price stability is achieved, will figure prominently in this exercise. The review will also take into account how other considerations, such as financial stability, employment and environmental sustainability, can be relevant in pursuing the ECB’s mandate.” Note employment, consideration of several other central banks, and the addition of the environment, which is a new one.

The big questions are:  will they change their target (perhaps to a price level, or even a growth rate), will they change their decision-making (perhaps making the votes public), and how will they take account of any side-effects from their extraordinary policies. These are all important questions for the future conduct of monetary policy. But with the current monetary policy basically, at or near the end of its rope, we can’t hold out much hope that they will suddenly discover some new way of working that will solve all the problems they’ve faced so far. They may get a new hat, but there aren’t likely to be any more rabbits to pull out of this one than in the old one. 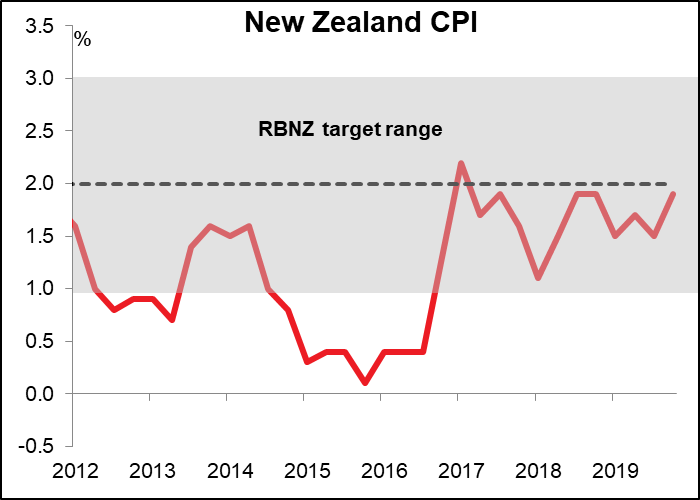 CAD continued its climb, showing how strong the shock to the market was. I think we could be in for some profit-taking today ahead of the weekend, however.

The day starts with the preliminary purchasing managers’ indices (PMIs) for the major industrial countries. We’ve already had the ones from Japan, although no one cares about them apparently – probably because the industrial production figures there include a forecast, so everyone can already see what manufacturing expectations are.

The Eurozone PMIs are all expected to rise slightly, consistent with the view in the market that the worst is over for Europe. Still the German and EU-wide manufacturing PMIs are forecast to remain deep in negative territory. I expect though that investors will launch onto the trend and the improvement will be considered positive for the euro. On the other hand, if the German manufacturing PMI disappoints again, it’s likely to deal quite a serious blow to the currency. 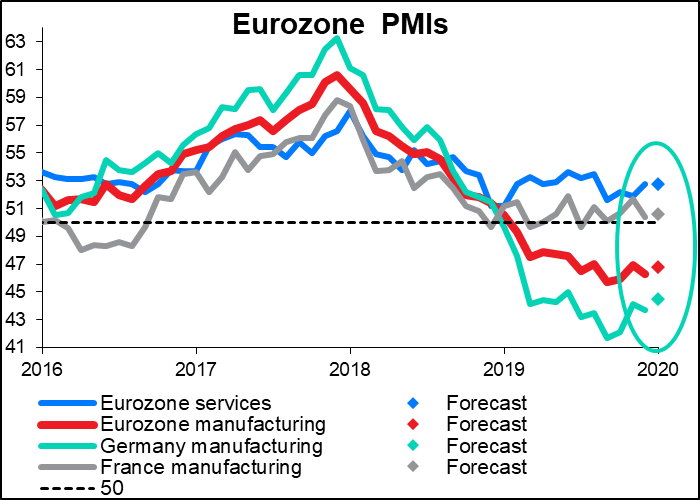 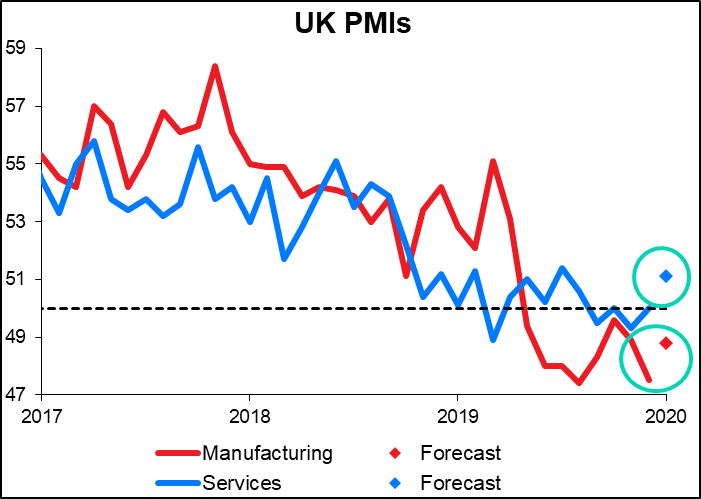 That would still leave the PMI deep in negative territory, where a Bank of England rate cut would not be a strange thing. But the improving trend might encourage members of the Monetary Policy Committee to wait another month. 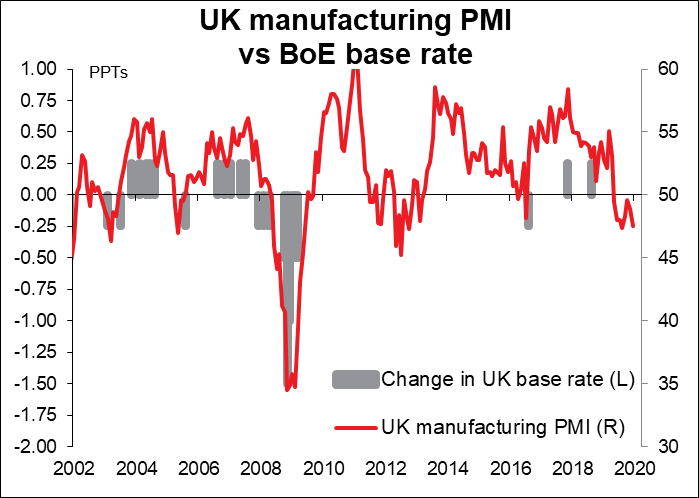 The US manufacturing PMI is expected to remain unchanged at a significantly higher level than the European one, while the service-sector PMI is forecast to rise a bit further. These are fairly robust numbers by comparison and are likely to keep the dollar supported. 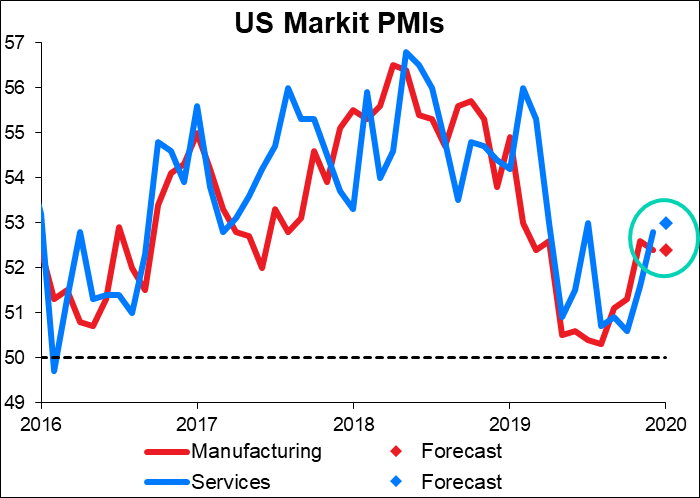 Nevertheless, the larger improvement that’s forecast for the EU-wide PMI could cause EUR/USD to rise somewhat. But this relationship is by no means certain. 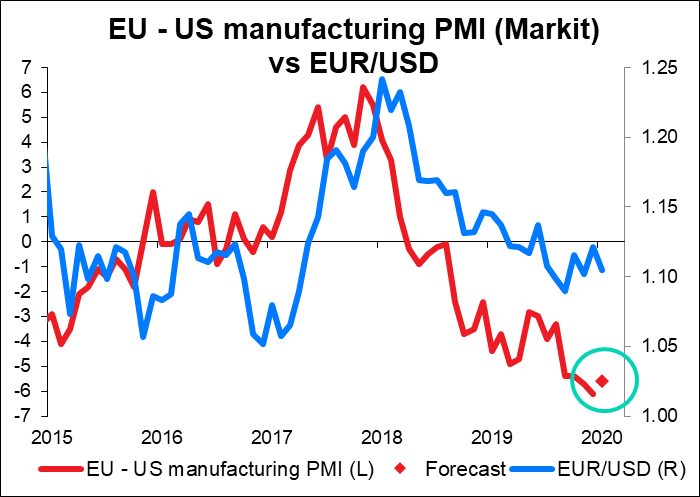 Shortly before the US PMIs come out, Canada announces its retail sales. The Bank of Canada sees consumer spending and housing as the main supports of the economy, so further weakness in retail sales would be a negative for CAD. Today’s figure is expected to show some mean reversion after four months of decline, which could help to prompt some short-covering ahead of the weekend following Wednesday’s blow-out move. 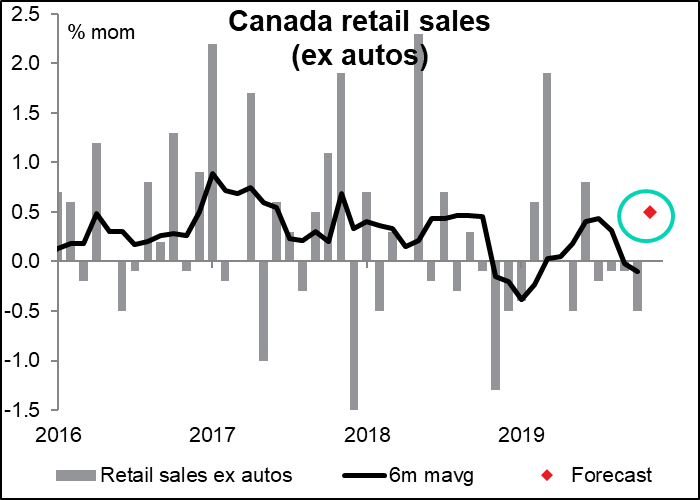 Then over the weekend, there’s going to be a regional election in Italy. The Five Star Movement is expected to do poorly in this election, which could precipitate its collapse. That would increase the possibility of a snap election at some point this year, which would be negative for the euro, as political instability usually is. (I do remember once many many years ago when the Italian government fell and the ITL actually rallied, because people thought the country would do better with no government than with the government it had. But that was a long time ago.) 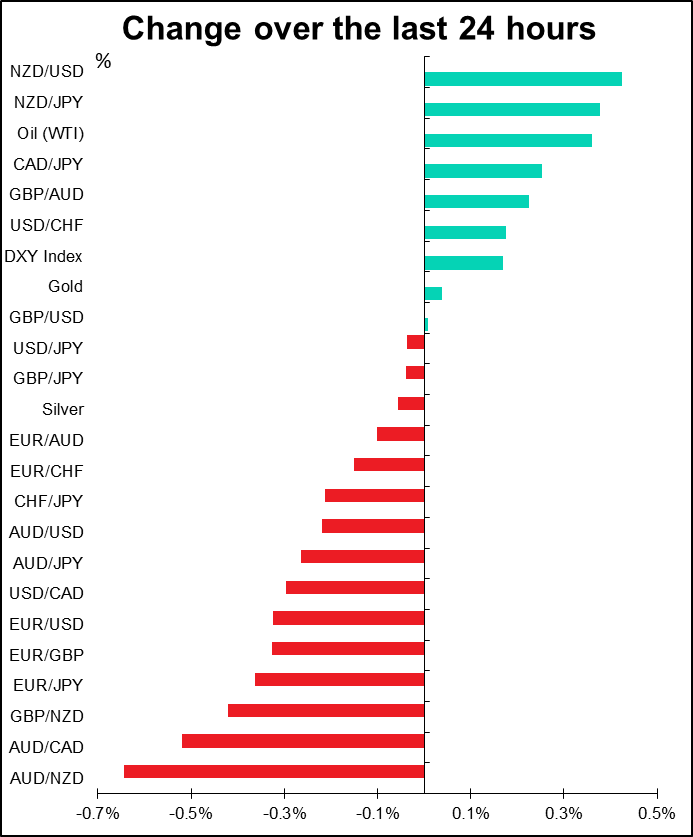