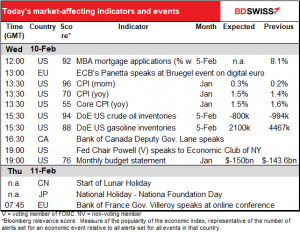 Not really a “risk-on” or “risk-off” day. Stocks were mixed both in Europe and in the US, where the S&P 500 was down marginally but the NASDAQ was up marginally. In Asia this morning though there’s a better tone, with most markets up, some substantially (e.g. the CSI 300 +2.1%). The S&P 500 futures are indicated +0.3%.

The focus in the markets remains on the US fiscal package. There have been some questions recently about whether it might be too big and therefore a) wasteful and b) spur inflation. These are arguments made by people with jobs who can work from home, but they do affect market sentiment – a smaller package would be worse for the economy but better for the bond market. “Better for the bond market” = lower yields = weaker USD probably, unless people are thinking – as I do – that Fed Chair Powell will keep rates unchanged and will buy all the bonds that his former colleague Treasury Secretary Yellen chooses to sell. In that case, a bigger fiscal package = higher inflation = lower real yields = weaker USD.

There are also some questions about how quickly the bills will pass. The Democratic Chair of the Senate Finance committee yesterday vowed to complete the bill by early March, while House Speaker Pelosi said the House is aiming to vote on the full bill during the week of February 22. The quicker the better, as the Pandemic Unemployment Assistance (PUA) program and other special unemployment benefits are scheduled to expire mid-March. That’s the “fiscal cliff” that the US faces.

Otherwise, the day was a day of mysteries in the FX market.

NZD was the worst-performing currency. The big decline came during early European trading yesterday, which was around 11 PM Wellington time, so probably not due to anything that happened in New Zealand. Rather, as the graph shows, NZD/USD (red line) tracked the Bloomberg commodity index (blue line) fairly closely. 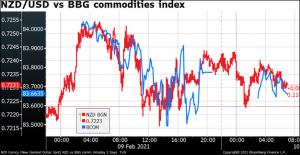 The big question then is why didn’t AUD follow it too? Why did AUD/USD recover today even as the commodity index didn’t? The answer there seems to be hopes for the US fiscal stimulus package, although one might think that would help NZD too. 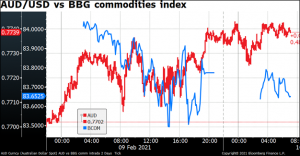 I’m also surprised that NZD/USD tracks the overall Bloomberg commodities index rather than the Bloomberg agricultural commodities index since 62% of New Zealand’s exports are foods of one kind or another and only 11% are other kinds of commodities, mostly lumber. In fact looking at the various sub-indices of the Bloomberg commodities index, NZD/USD is most highly correlated with the industrial metals sub-index, which is downright bizarre as these account for only 3.2% of exports (vs 26.6% for milk and 13.5% for meat, for example). But markets aren’t entirely rational and perhaps FX traders don’t bother with the details, they just lump NZD into the “commodity currencies” basket. 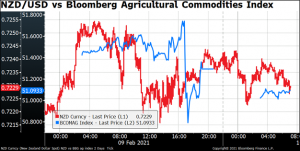 Another mystery: CAD gained despite lower oil prices (see below). This is probably because of the narrowing yield spread of US Treasuries over Canadian bonds. 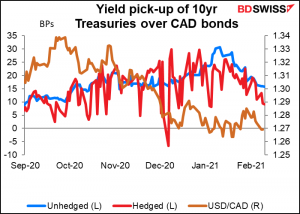 Oil was down slightly after the American Petroleum Institute (API) data came out. The API reported a larger-than-expected drawdown in crude oil inventories, which should be bullish for oil, but what caught the market’s eyes was the larger-than-expected increase in gasoline inventories. Oil prices were trading higher ahead of the data, buoyed both by optimism over OPEC+s willingness to restrain production and by the impending US stimulus package, which many people hope will help to revive the US economy and support demand for oil. As of November, the latest date for which we have data, the recovery in driving peaked in July and the number of miles driven monthly in the US has trended lower since. 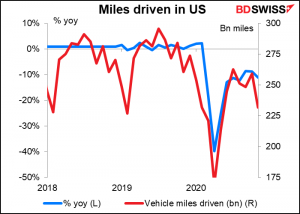 All quiet during the European morning, except for those who trade SEK and are waiting for the Sveriges Riksbank decision at 08:30 this morning. I don’t cover Sweden – I have enough problems in life and our clients aren’t that interested in it – so I have no view about what they will do. In any event the 19 economists polled by Bloomberg are unanimous that they’ll leave rates unchanged at zero, so I’ll venture to guess that they’ll leave rates unchanged.

There’s no forecast for the Mortgage Bankers’ Association (MBA) mortgage application figure. So far mortgages are running near the peak of where they have been at this point in the year over the last decade, indicating a strong housing market. 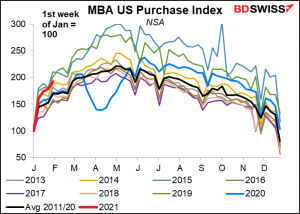 The US consumer price index (CPI) should be the main indicator of the second week of the month, but nowadays who cares about inflation? Until it gets to 3% or so we’re not going to see any reaction from the Fed, and that’s a long way off. Last week if you remember the EU-wide inflation figure greatly exceeded estimates (core CPI +1.4% yoy vs +0.9% estimated) but the markets didn’t react at all. This month, headline inflation is expected to tick up a bit but core inflation remain unchanged, which probably wouldn’t elicit much of a market reaction even under normal circumstances. 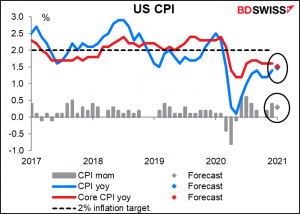 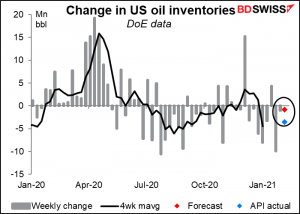 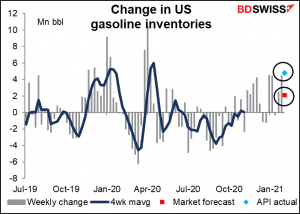 The big event of the day will be Fed Chair Powell’s speech via webinar to the Economic Club of New York. He’s going to be talking about “The State of the US Labor Market.” We can get a good idea of what he’s likely to say on this topic because he spoke about it at length in his press conference on Jan. 27th. I’ve extracted all his comments on the subject here (these paragraphs were not consecutive) and added graphs to illustrate what he’s talking about. Despite the fall in the unemployment rate in January, I can’t imagine that he will change his tune substantially from the long-term view that he expressed then.

The unemployment rate remained elevated at 6.7% in December (NB: 6.3% in January), and participation in the labor market is notably below pre-pandemic levels. 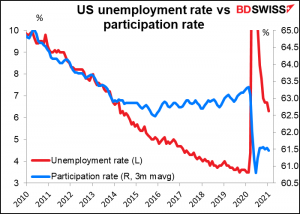 Although there has been much progress in the labor market since the spring, millions of Americans remain out of work. The economic downturn has not fallen equally on all Americans, and those least able to shoulder the burden have been the hardest hit. In particular, the high level of joblessness has been especially severe for lower-wage workers in the service sector and for African-Americans and Hispanics. The economic dislocation has upended many lives and created great uncertainty about the future 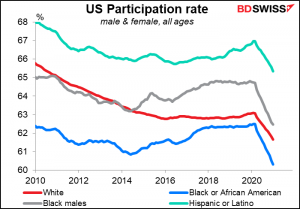 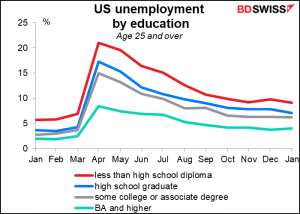 So in a world where almost a year later, we’re still nine million jobs at least, that’s one way of counting it, it can actually be counted much higher than that, short of maximum employment, and people are out of the labor force who were in the labor force, the real unemployment rate is close to 10% if you include people that have left the labor force, it’s very much appropriate that monetary policy be highly accommodative to support maximum employment and price stability, which is getting inflation back to 2% and averaging 2% over time. 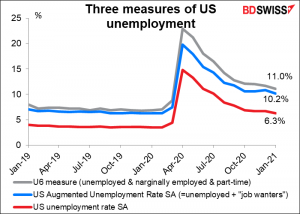 The big thing is that the jury’s out, and this has been a concern since the very beginning, is the concern that people, if they become disconnected from the industry or the job that they used to work in, it can be years or never when they get back into the labor force, particularly for people who are well along in their careers. 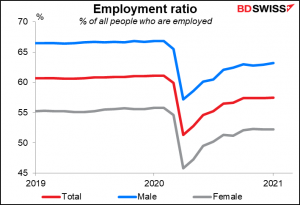 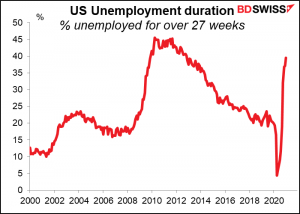 And I think it would be wise as a country for the longer run productive capacity of the country if we were to look out for those people and help them find their way back into the labor force, even if it means continuing support for an additional period of time.

I think the last two paragraphs probably represents the new “reaction function” of the Fed (that is, a summary of how they will react to changes in the economy). Ever since I can remember – and I bet I can remember a lot longer than most of my readers can! — the Fed has put “stable prices” as its #1 goal and “full employment” as only a secondary goal. The rationale was that low & steady inflation was a prerequisite to full employment. That’s why Fed Chair Paul Volcker hiked the Fed Funds rate to 20% in 1981 even though it sent unemployment up to 10.8% in 1982. Now however the cart and the horse have switched places. “Full employment” appears to be their first priority and they’re willing to sacrifice inflation – or at least let it exceed their 2% target for some time – in order to achieve that.

Moving right along, I doubt if the monthly US budget statement will be market affecting, but in case it is. If Congress passes the $1.9tn fiscal package, this figure is bound to explode again. 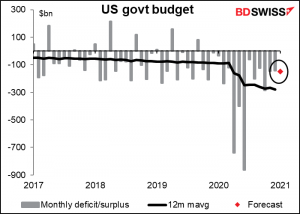 Then expect peace and quiet overnight…China starts the Lunar New Year holiday and Japan enjoys National Foundation Day, a holiday I have no idea about even though I lived there for 18 years. It’s one of those holidays when you know the office is closed and you get a day off, but you have no idea why. 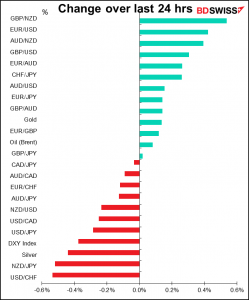