You are at:Home»MARKET PREVIEW»NZD jumps as Auckland Lockdown Eases; Lots of Speakers 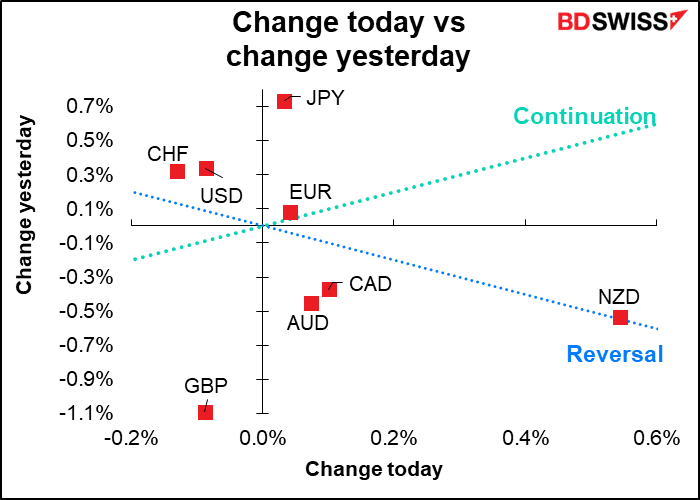 Clearly there’s only one currency we have to explain this morning. What happened to NZD? Auckland, the country’s largest city, eased some lockdown restrictions starting Tuesday and PM Ardern said that the lockdown is likely to end entirely later this month. 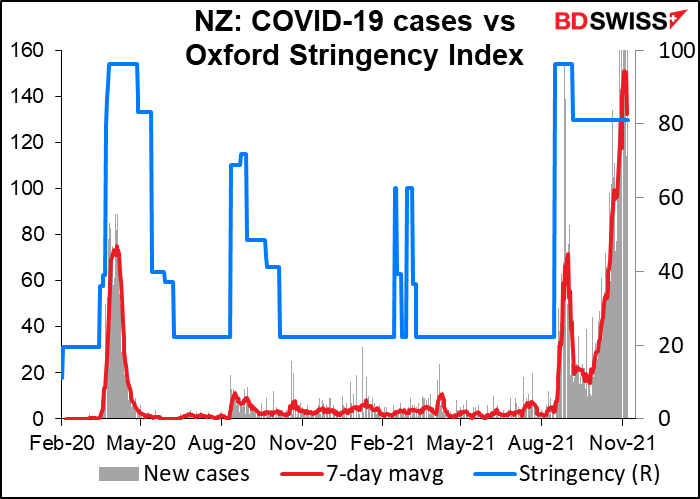 The country’s vaccination rate, while at the low end for developed countries, is within the normal range. According to Ardern, 90% of Auckland’s population has had a first dose and 80% a second dose, which allows the city to reopen. 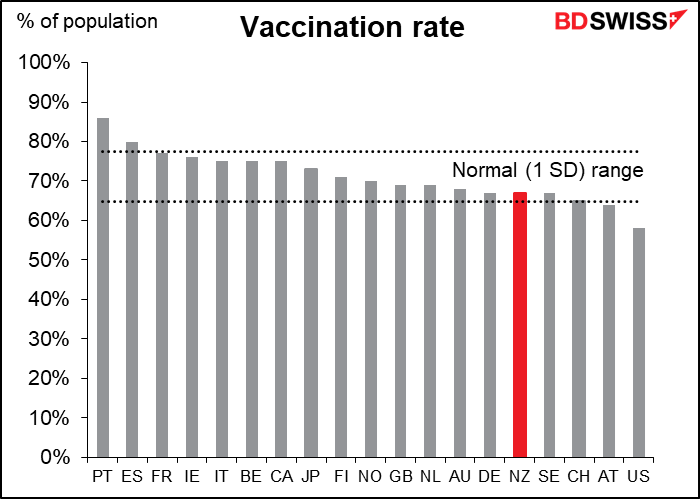 previous figures were revised up by a sharp 312k. Moreover, the details were even better – private payrolls were up 604k vs 420k estimate; manufacturing payrolls rose 60k, the largest increase since June 2000, suggesting that supply chain bottlenecks are easing; and travel-related sectors also gained (leisure & hospitality +164k), implying that the pandemic freeze is melting. The unemployment rate fell one tick to 4.6% while the participation rate was unchanged, meaning that the fall in unemployment was thanks to new jobs. The participation rate for prime-age workers increased and the prime-age employment-to-population ratio rose, although it’s still below its pre-COVID peak.

Given Fed Chair Powell’s comments in his press conference that “you don’t have to think back to the million job months of June and July, you can just think, okay, 550 to 600 [thousand], we should get back on that path, then we would be making good progress.” Well, here we are at 550k (almost), why isn’t the FX market celebrating? Why did US Treasury yields actually fall on Friday, with the 10yr Treasury down a substantial  -7.5 bps and 10 yr real yields -5.7bps lower?

I think it’s because Powell convinced the market that they’re willing to be “patient” and that it’s unlikely they would start hiking rates before they end their bond purchases, which won’t be before June unless they accelerate their tapering. Furthermore, Powell indicated that a move in the first half of the year was unlikely as they wait to see how the virus and the labor market develop.

“…it’s a complicated situation, and I would say we hope to achieve significantly greater clarity about where this economy’s going and what the characteristics of the post pandemic economy are over the first half of next year.”

That’s why last week the odds of a rate hike in June fell notably. 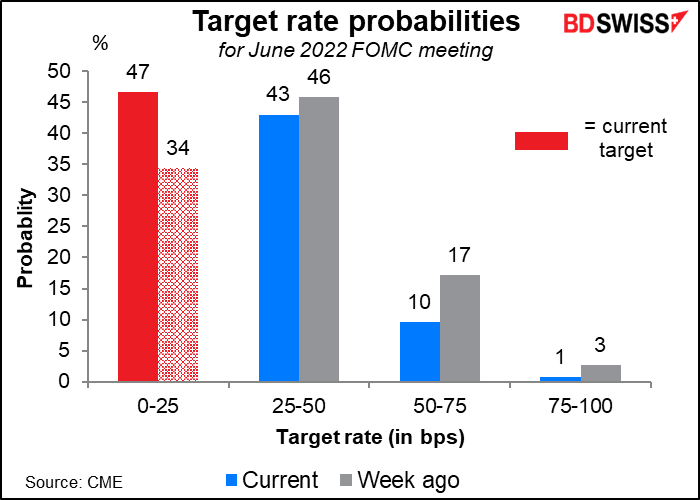 The market now sees that as a 50-50 chance – July as the first hike seems more likely. 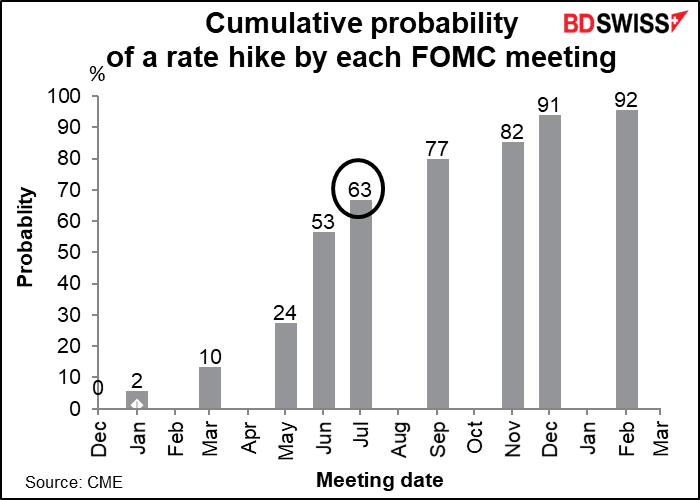 The odds of three rate hikes next year fell sharply while the odds of only one rose. 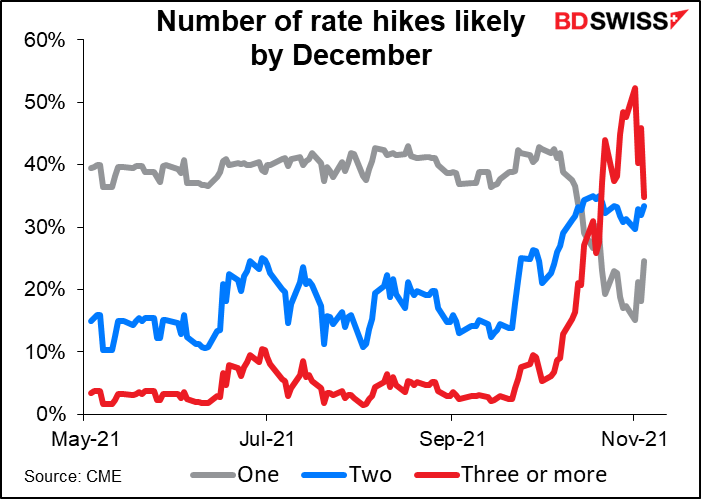 Very small moves last week. Not much change. Net net it was against the dollar, but very small size. A reduction in EUR shorts and an increase in NZD longs were the biggest moves, offset a bit by an increase in CHF shorts. 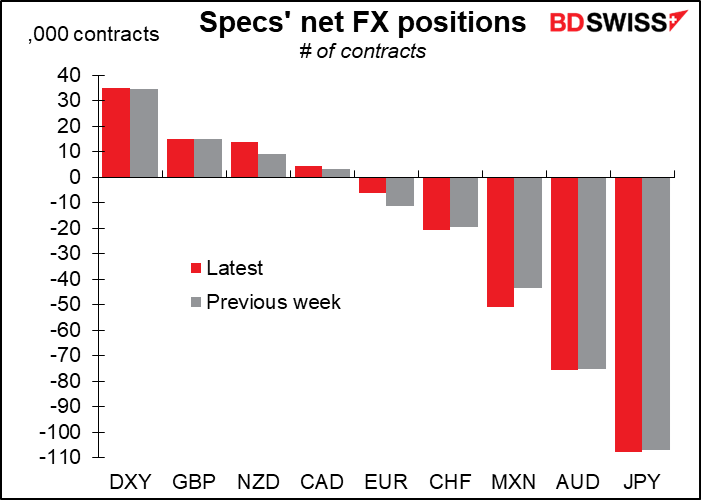 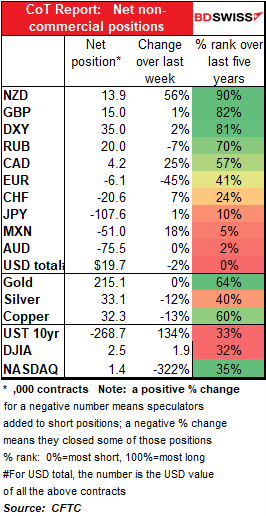 Hedge funds were more active in adjusting their positions. Against the dollar, they doubled their GBP and NZD longs while trimming their EUR shorts. On the other hand they increased their shorts in CHF, CAD, AUD, and JPY. 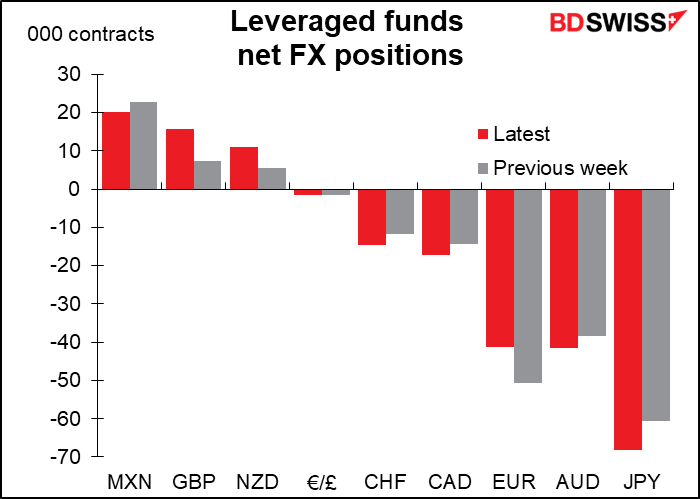 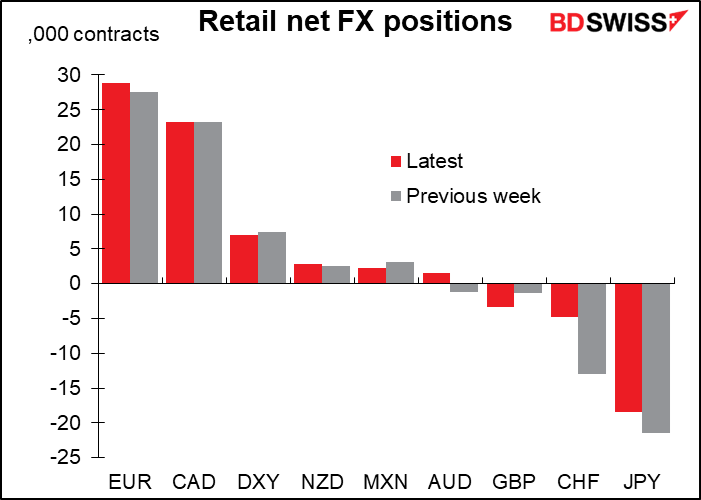 Specs reduced their silver positions a bit, not much change in gold. 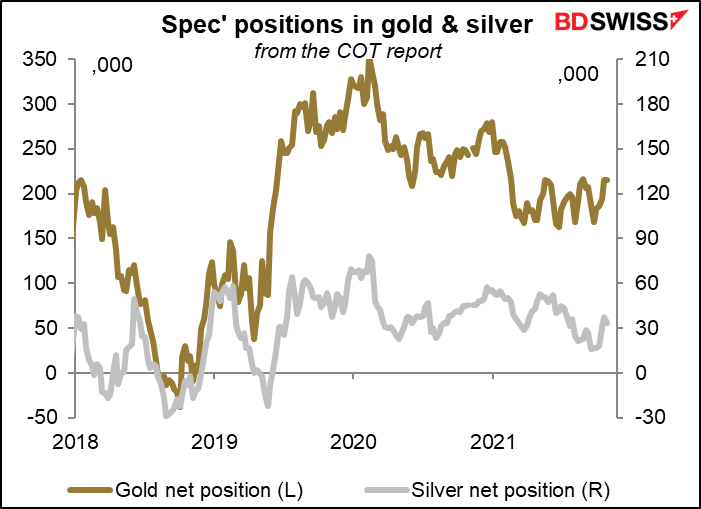 Note: because of the Veteran’s Day holiday this week, the next CoT Report will be on Monday, Nov. 15th. 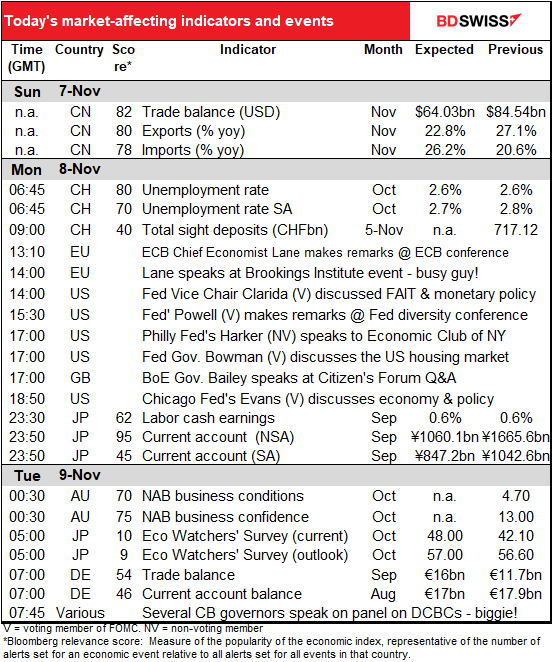 The hitherto somnolent Swiss sight deposits perked up last week with a half-hearted increase. It was up a derisory CHF 291mn one week, CHF 988mn the next, and a substantial but still moderate CHF 1.803bn last week (when I say “last week,” I really mean the week-before-last. Formally speaking, we get last week’s data today.) While that’s a healthy amount, it’s far below what the Swiss National Bank (SNB) did the last time EUR/CHF hit these levels back in July of last year (see graph). 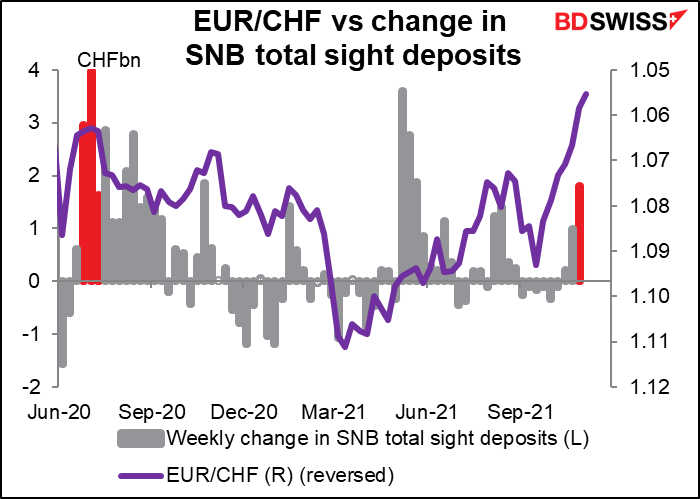 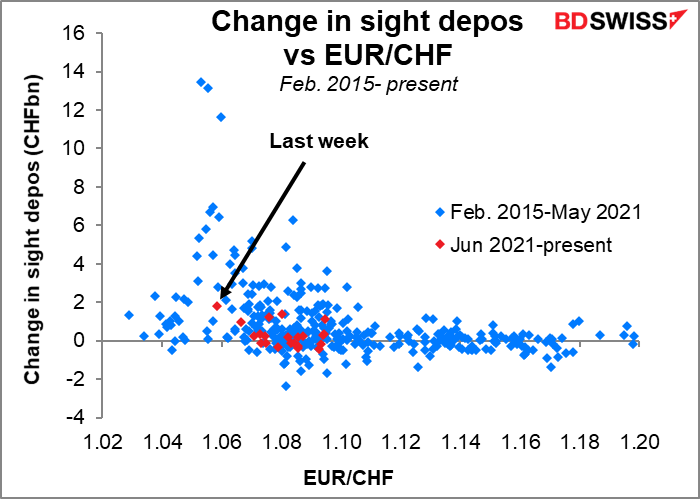 That’s about it for the indicators during the US and European days.

There are a number of speakers worth noting, including two speeches by the busy European Central Bank (ECB) chief economist Philip Lane. One of those speeches will be at a Brookings Institution event, “Taking stock of new Fed and ECB monetary policy frameworks,” which will also hear from Fed Vice Chair Gov. Clarida (V).

Fed Chair Powell (V) will make opening remarks at a conference hosted by the Fed to explore how gender influences economic and financial outcomes over an individual’s lifetime. It doesn’t sound like the platform for a radical rethink of monetary policy but the market seems to move on whatever the Fed Chair says even if he’s said it a million times before, so it might be worth watching for.

Bank of England Gov. Bailey will speak at a Citizen’s Forum Q&A. I hope someone will ask him which of my suggested theme songs he prefers. 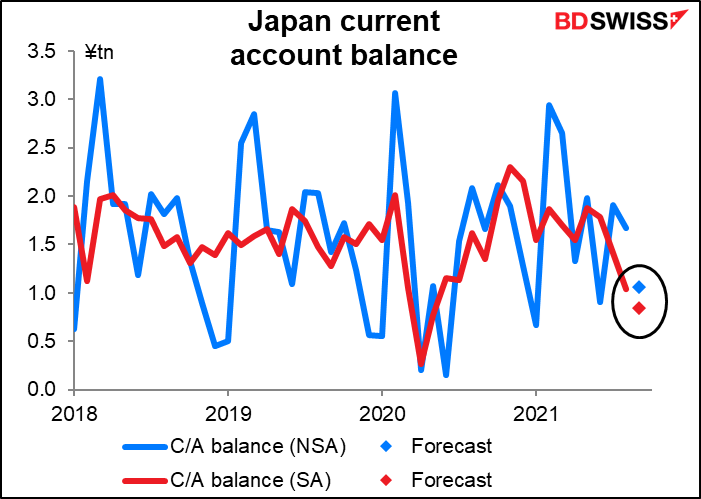 Not surprising, since the trade account slipped into deficit during the month. 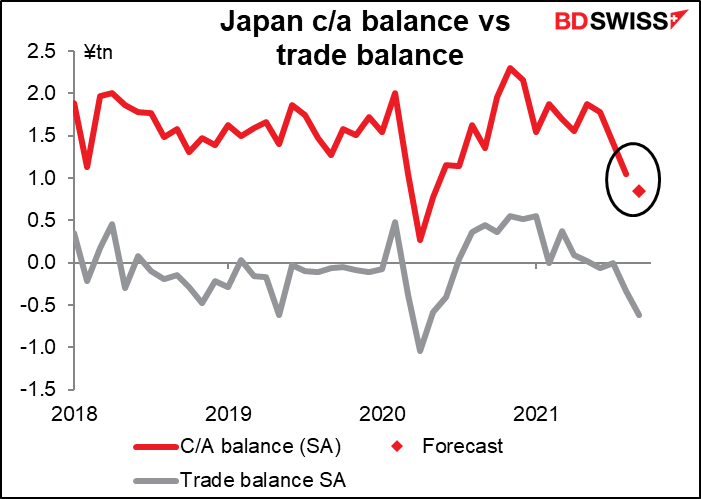 However, unlike most countries, the trade account is only a minor part of Japan’s current account. Most of it is “primary income,” that is, income from investments abroad: direct investment, portfolio investment, and “other investment,” such as loans, deposits, and trade credits. The once-mightly Japan export machine long ago turned into a rentier economy.

It’s split pretty evenly between direct investment and portfolio investment – kind of surprising that they still make so much on their overseas portfolios, given how far interest rates have fallen (most of this money is in bonds). 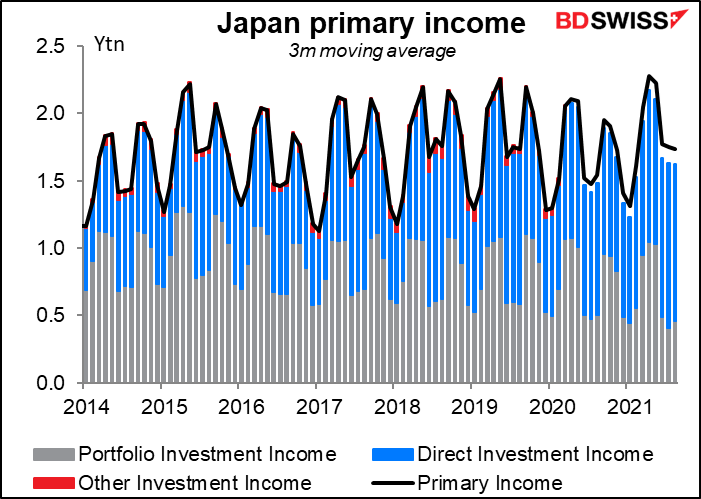 Speaking of which, Germany announces its trade figures early Tuesday morning, but it’s not a big deal now that TFG isn’t in office anymore to make a stink about the country’s trade surplus. 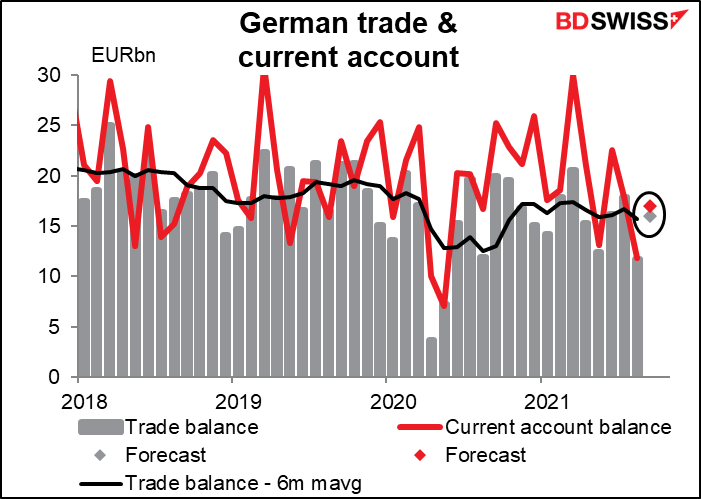 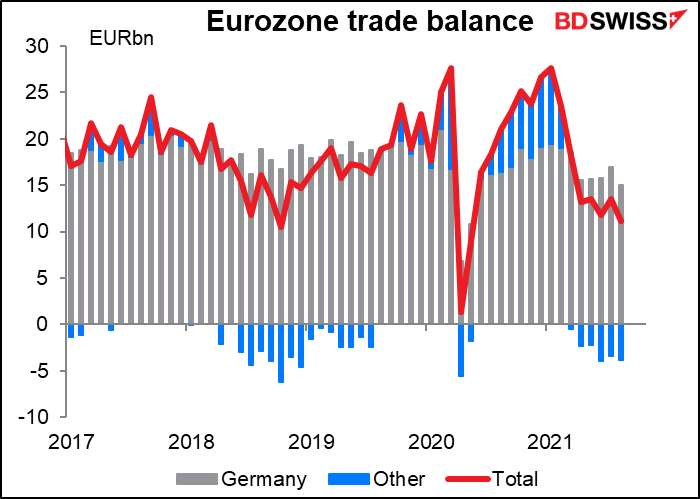 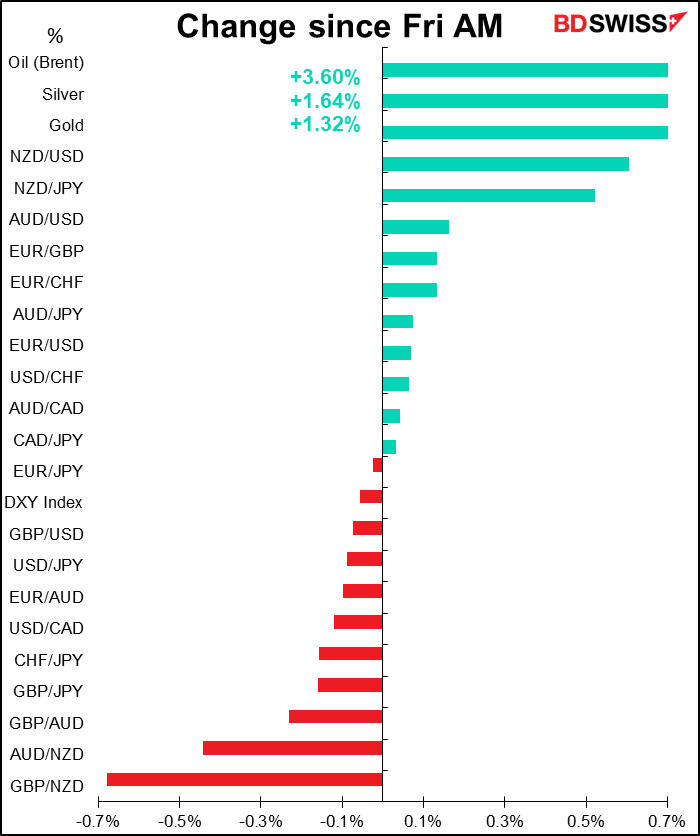