Yesterday was “mean reversion day” as the market largely reversed Tuesday’s movements. JPY which had been the #1 gainer on Tuesday was the #1 loser, while the commodity currencies rebounded – although NZD, the biggest loser for two days straight, was not the biggest winner. That was CAD, which rose as oil – down 5.0% when I started writing yesterday morning – rose 4.4% during the day.

Although the weekly US Energy Information Agency oil inventory report showed total crude and product inventories rose by the largest amount since December, it also showed the highest domestic gasoline consumption in four months and Gulf Coast refiners consuming more oil as they continue to recover from the cold snap there in February. 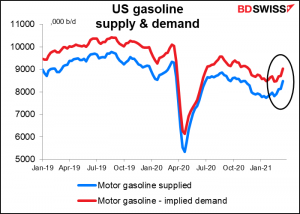 There are signs that travel bottomed out in January and has been reviving in the US and UK. It had been recovering in the EU until recently but has started to turn down once again. 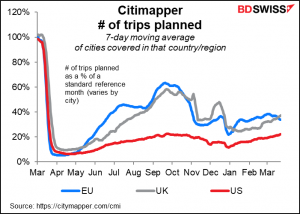 Also, the gridlock in the Suez Canal continued as that ship I mentioned yesterday is still stuck. It’s one of the largest container ships in the world – 400 meters long, somewhere between the Eiffel Tower and the Empire State Building – and is fully loaded, so it’s really, really stuck. Estimates are that it may be blocking 2mn barrels a day of oil and petroleum products. Of course, even if the canal were shut ships could still go around Africa, but that takes a lot longer, which increases the price of oil (more interest on the money borrowed to buy the oil plus higher shipping costs). The Suez Canal was shut from 1967 to 1975 and the world managed to function.

Markets were also encouraged by some bullish headlines coming out of Fed Chair Powell’s testimony, such as “2021 should be very strong for economic growth” and “markets have underlying sense of improved outlook,” “higher yields reflect news on vaccination, growth” etc. That helped to create more of a “risk-on” sentiment in the markets.

Plus of course the preliminary purchasing managers’ indices (PMIs) generally exceeded estimates, substantially in several cases (except for US services, which was already at a high level – nonetheless its modest rise brought it to the highest level in six years). The Eurozone manufacturing PMI hit a record high! 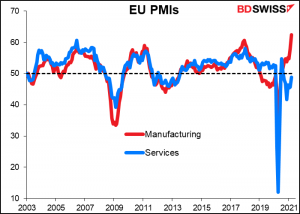 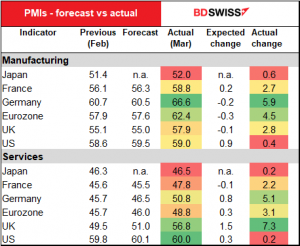 The figures also showed mounting inflationary pressures as several gauges of price pressures were at their highest in years. The US composite gauge of prices paid and received hit a record high on supply shortages and supply chain issues. Input prices are rising much faster than output prices – either this will put pressure on company margins, or they’ll start to raise their prices.

Yet US stocks were lower despite the improved sentiment and stronger-than-expected indicators. Tech stocks fell particularly hard ahead of today’s hearing by the House Committee on Energy & Commerce on “Disinformation Nation: Social Media’s Role in Promoting Extremism and Misinformation.” This will no doubt turn into an occasion to bash Facebook and Twitter. While I agree that they have their own issues, I don’t think they’re necessarily the source of the problem. It should really be a hearing on “The Republican Party’s Role in Using Social Media To Promote Extremism and Misinformation.” Where do they think the misinformation comes from? It grows in the ground in the wild, like mushrooms? A recent poll showed that 65% of Republicans believe that President Biden’s win was solely the result of voter fraud and 29% of Republicans say they will never accept him as president. That’s the source of the problem and that’s what the hearings should be focusing on. 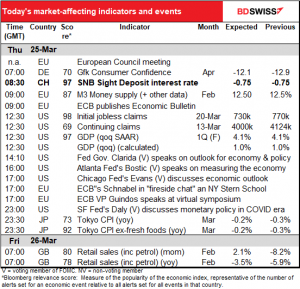 The focus today will be on the European Council meeting. (The European Council consists of the heads of state or government of the member states, together with the President of the European Commission.) EU leaders discussed the digital transformation at their meeting in October, at which time they asked the European Commission to create “a comprehensive Digital Compass which sets out the EUʼs concrete digital ambitions for 2030.” That vision for a “digital future for Europe” will be revealed at this meeting, including work on digital taxation. Tomorrow they’ll have a Euro Summit, which “will discuss how to strengthen the international role of the euro.” I wouldn’t be surprised to hear a recommendation about starting trials of a digital euro at that meeting, although the ultimate decision is probably up to the European Central Bank (ECB).

Other topics that they’ll discuss include:

●COVID-19: The roll-out of vaccines, the epidemiological situation, and the coordinated response to the pandemic crisis.
●2021 European Semester (aka Budget): The priorities for the 2021 European Semester. Leaders will endorse (or not!) the recommendation on the economic policy of the eurozone.
●Eastern Mediterranean: The Eastern Mediterranean and a report on EU-Turkey relations.
●Russia: a strategic debate on the relations with Russia.

Before then, the Swiss National Bank (SNB) meets. There’s not much point in discussing in depth what they’re likely to do or say. They haven’t made any substantial changes to their policy since January 2015, and I don’t expect any changes at this quarterly meeting either. 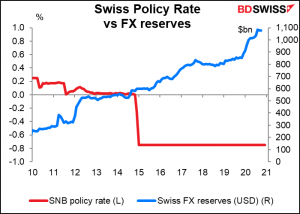 EU money supply has a relatively high Bloomberg relevance score, but even some ECB Governing Board members have dismissed it as irrelevant. When was the last time they had a debate about this at the ECB press conference? I suppose people are looking at the bank lending figures, not the money supply growth. 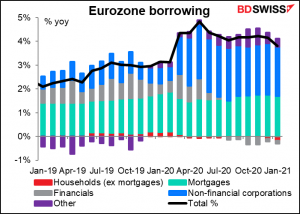 The big indicator of the day is the weekly US initial jobless claims. The market is looking for an encouraging -40k fall. This might be ambitious as the average over the last month has been -19k, although it does fluctuate a lot week-to-week. Perhaps people are looking for some mean reversion after last week’s 45k increase. 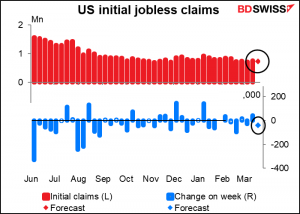 Continuing claims are forecast to fall by 124k. They’ve been trending lower much more steadily than the initial claims, maybe because people are exhausting their benefits and forced to fall off the rolls. 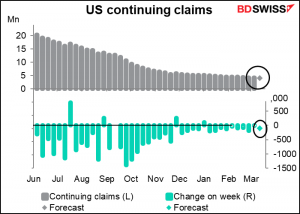 The third and final estimate of US Q1 GDP shouldn’t raise any eyebrows.

Then we wait until Asia wakes up and Japan releases the Tokyo consumer price index, which is more closely watched than the national CPI. Although the core CPI, the one that people focus on the most, is expected to tic up a bit, it’s expected to remain in deflation for the eighth consecutive month. With the BoJ’s new policies announced last week that would help banks out if interest rates move lower, will that spark thoughts of further BoJ easing? I doubt it, but you never know. 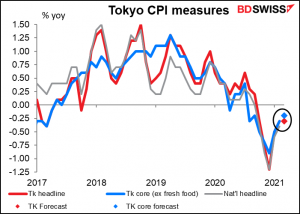 So, then we have to wait until the sun breaks over the London Bridge, which now occurs at around 6 AM London time, so in fact it will be quite light by 0700 GMT when Britain announces its retail sales. The market is looking for some bounce-back after the steep fall in January, but not that much of one. 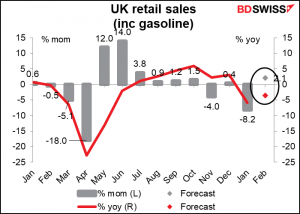 Although by international comparison, Britain isn’t doing that badly – only the US is doing noticeably better. 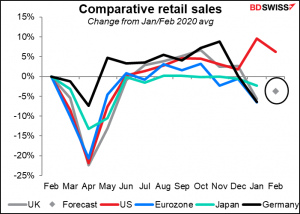 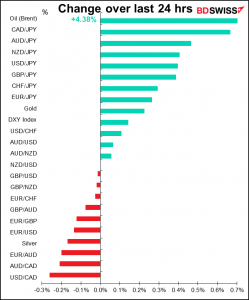