You are at:Home»MARKET PREVIEW»JPY Up on Risk Aversion, EUR Down on Falling Real Yields; US PCE Deflators 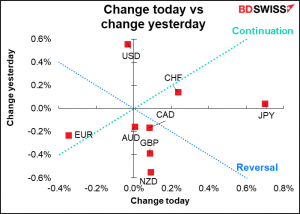 Only two moves in the FX market worth noting: the stronger JPY and the weaker EUR.

For JPY, I wish I could talk about how it strengthened in reaction to reports that incoming Japan PM Kishida would appoint Shun’ichi Suzuki as Finance Minister in place of long-serving Taro Aso, or the much better-than-expected Tankan report (although the outlook for Q4 wasn’t so great), but alas fundamental analysis has little to contribute when it comes to the yen nowadays. 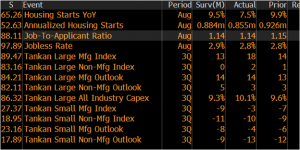 The strength of the yen was clearly a function of global risk aversion as the S&P 500 melted down. I can give you a million reasons why I think JPY should be weaker from a fundamental point of view (economy is a global laggard & interest rates are never going up are the two main ones) but as long as JPY trades as a risk barometer and not as a domestic currency – the “international yen” vs the “domestic yen” – it doesn’t really matter. 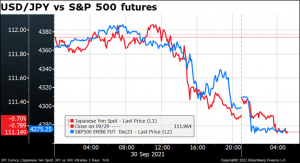 EUR is a bit harder to explain. USD was weaker against most currencies, but EUR was weakest of all. Is it the falling real yield differential? 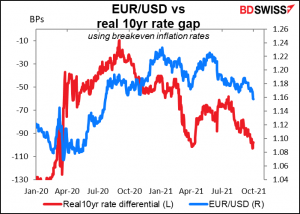 The nominal yield differential isn’t moving that much. 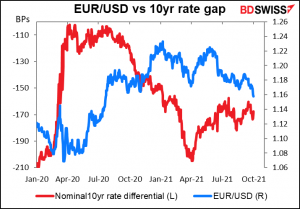 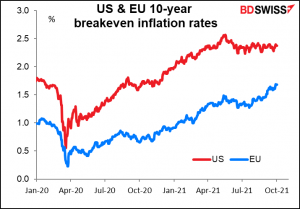 Most of the weakness EUR/USD occurred during New York trading hours and was largely confined to the pair as other G10 currencies didn’t weaken notably against USD.

For today, I would expect JPY to fall back as I think markets may be in a happier mood following last night’s success in keeping the US government open for business, at least for a few more months. Both chambers of Congress passed a standalone stopgap spending bill that will fund the government through Dec. 3. This is not the same as getting rid of the debt ceiling however; it only authorizes the government to spend the money, not to raise it, so the Oct. 18th deadline remains. There is a way for the Democrats to get around this problem without the help of the recalcitrant Republicans, but there are some intraparty issues among Democrats that are making it difficult.

I could be wrong however. Most Asian stock markets are lower this morning and the S&P 500 futures are indicating an opening down 0.8% on top of yesterday’s 1.2% fall. My opinion on JPY may be biased by the fact that my daughter’s tuition payment at her university in Kyoto is due on Oct. 20th and so I have a big EUR/JPY liability coming due. 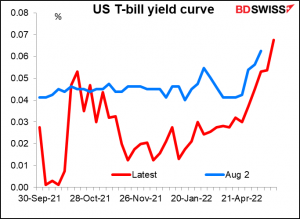 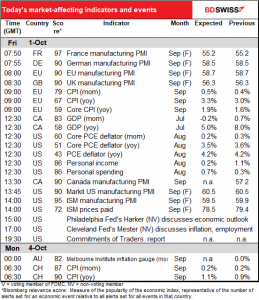 The day then starts out with the manufacturing purchasing managers indices (PMIs), the final ones for those major industrial countries that have preliminary ones and the one-and-only ones for other countries. All of them were in the “decelerating expansion” quadrant – that is, they’re still in expansionary territory but not as much as they were three months ago. Japan looks particularly vulnerable. 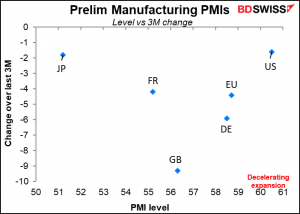 Later in the day we’ll get the Institute of Supply Management (ISM) version of the manufacturing PMI for the US. In my view this doesn’t give as accurate a picture of the US manufacturing scene, because a) the figures are compiled from the ISM’s members, not a random sample, and b) they ask about a company’s overall picture, not their US operations only. The two can be quite different for multinationals. Nonetheless, it has a long history (back to 1948) so Americans are used to watching it.

The ISM manufacturing PMI is expected to be down a little bit and more or less in line with the Markit version of this index. In theory that should be no surprise to anyone, but in fact the market tends to react to this index and so a decline may be seen as positive for Treasuries and therefore negative for the dollar. 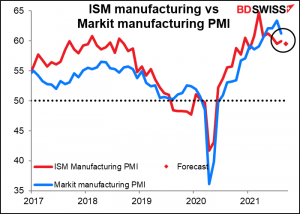 Adding to that view would be the expected decline in the prices paid index, seen as a harbinger of future inflation. 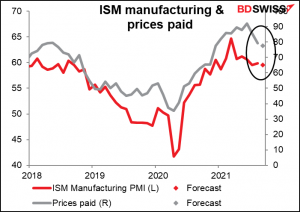 EU consumer prices are expected to be up a fairly sharply on a mom basis. Still, the European Central Bank is sticking with its view that the rise in inflation is only temporary, so this may not have that much effect on the markets. Yesterday’s German inflation data was slightly higher than expected: the mom change was 0.3% vs +0.2% expected, pushing the yoy rate up t9 4.1% yoy vs +4.0% expected. 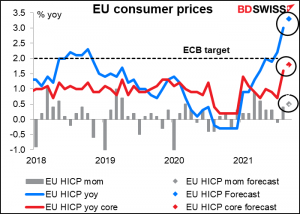 Canada’s GDP is expected to be down 0.2% mom. This compares with the preliminary report in August, which penciled in a 0.4% mom decline despite the easing of restrictions in several provinces. The market apparently expects that preliminary forecast to be revised up, thanks to a solid 1.3% rise in hours worked and indications of strong consumer spending on services (although there were supply chain disruptions that offset those gains by depressing manufacturing sales and construction activity). The market will also be looking at the preliminary estimate of GDP for August.

Assuming that the preliminary August figure shows some acceleration in output,. I think this figure could be positive for CAD. 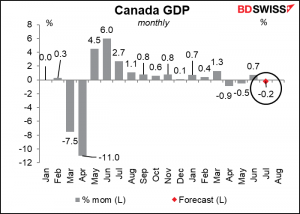 Then we get the big indicator of the week: the personal consumption expenditure (PCE) deflators. Just to remind you, it’s the PCE deflators, not the consumer price index, that the Fed uses as its inflation gauge. EG that’s how they frame their inflation forecasts. But for some inexplicable reason the market pays more attention to the CPI. Sigh.

The PCE deflator is expected to top out at 4.2% yoy, while the core PCE deflator is forecast to decline one tick to 3.5% yoy. Given that the FOMC’s new forecast for core PCE inflation this year is 3.7%, a 3.5% rate should not set off any alarm bells – it’s all going as officials expected. “Inflation is elevated and will likely remain so in coming months before moderating,” according to Fed Chair Powell in last week’s press conference. If it begins moderating already, that would be a pleasant surprise, but I don’t think it would delay the Fed’s tapering plans. I think it would be neutral for the dollar in that it would tend to confirm the Fed’s “transitory” thesis, which in any case is the basis on which they’ve made policy already. 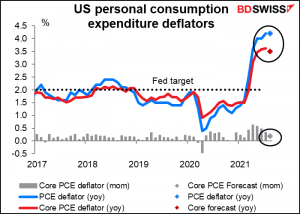 As for the personal income and spending figures, after some dramatic moves earlier this year as everyone in the country (and some of us not in the country too!) got a check for $1,400, income & spending have settled down to more normal rates of change. Income is expected to be up slightly and spending up even more. 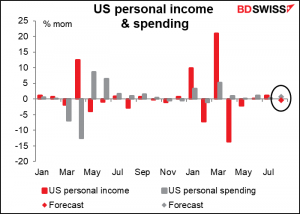 Both income and spending are well above pre-pandemic levels (8.7% and 7.%, respectively, according to today’s forecasts). The big question facing the US economy is what’s going to happen as the extraordinary income supplements from the government fade and that income figure comes back to earth. 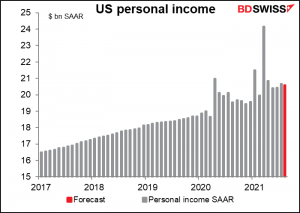 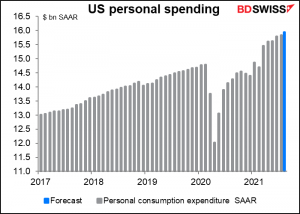 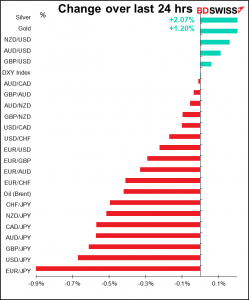