You are at:Home»MARKET PREVIEW»JPY up, EUR down as Virus Concerns Mount; European Council Video Conference, US Jobless claims 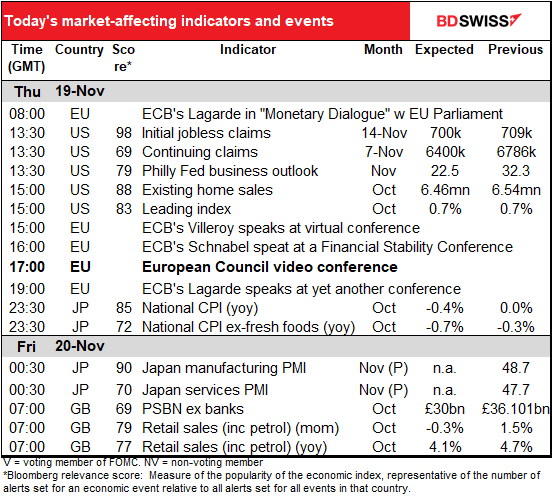 Once again a lot of movement in equities but not much in currencies. It was a “risk-off” day in the US on renewed concerns about the virus. New York City announced it would shut its schools from today, which sparked fears about greater restrictions throughout the US.

Indeed, measures are spreading around the US. Several Republican governors who have up to now resisted even the most basic, simple measures are giving up – several of the hardest-hit states have finally instituted mask mandates, although they haven’t stopped indoor dining even though they have the highest per-capita virus cases in the world. Many states are warning people not to travel next week for the Thanksgiving holiday – usually that’s the busiest travel season in the US, even more so than Christmas. Minnesota shut its gyms while restaurants are now take-out only.

Having said that, the currency movements yesterday were relatively small. There’s not that much to discuss about a ±0.2% movement.

The rally in JPY and decline in EUR are perhaps the market’s way of acknowledging the economic risks posed by the resurgence of the virus. USD/JPY fell below 104 for the first time since 9 November. Are we going to start hearing comments from the Ministry of Finance about how they are “watching the currency markets” and how “excessive volatility is not desirable”?

Speaking of the yen, the group investigating a digital currency announced it will start experimenting with a digital yen next year. These digital currencies shouldn’t be confused with tokens like Bitcoin however. As far as I can tell it’s just technical specifications for money transfer that will simplify the settlement system for digital payment. Right now you might say I use “digital euros” when instead of paying by cash I pull out my bank card and pay by contactless transfer. That doesn’t mean the euro is going to $16,000 any time soon, unfortunately. In Japan there are dozens of such contactless payment systems run by different companies, everyone from Apple and Google to the train company and 7-11. This organization is simply trying to make them compatible, as far as I can tell.

EUR/USD has been following the renminbi’s lead overnight in Asian trading for some time.

Finally, I want to thank all those who sent in their suggestions for names of fishes that we could use in writing about the Brexit negotiations. I particularly liked “the negotiations cod be resolved next week” and “negotiators are angling for a solution.” But the winner is, “Britain is worried that it might not get scrod.”

The focus in Europe today will be on the video call among the EU leaders. According to the European Council’s website, “This meeting will focus on the EU response to the COVID-19 pandemic.” However the discussion is likely to center on Hungary and Poland’s threat to veto the budget and its pandemic rescue fund. The EU wants to link access to the fund to the behavior of member states by means of a “rule of law” mechanism – in other words, a country pursuing policies that the rest of the EU doesn’t like would lose access to EU funds. Needless to say, the two countries that would be cut out don’t like this clause and are threatening to veto the budget, which needs unanimous approval.

This controversy could weigh on the euro today, not to mention on PLN and HUF. Failure to reach a compromise could delay the disbursement of funds to countries struggling to deal with the virus, which could result in further lockdowns, depressed economies, and more need for the monetary authorities to take on the burden of supporting the economy – EUR-negative.

In the past we harbored hopes that this call would ratify a Brexit decision, but it turns out that was the impossible dream.

As for the indicators, the highlight is the weekly US jobless claims. They surprised on the upside last week. This week economists are looking for continued improvement, but not as much as last week.

Initial claims are expected to be down 9k. Last week they were -48k. The 4-week moving average is -33k, so the forecast would mean a slowdown in the pace of improvement. 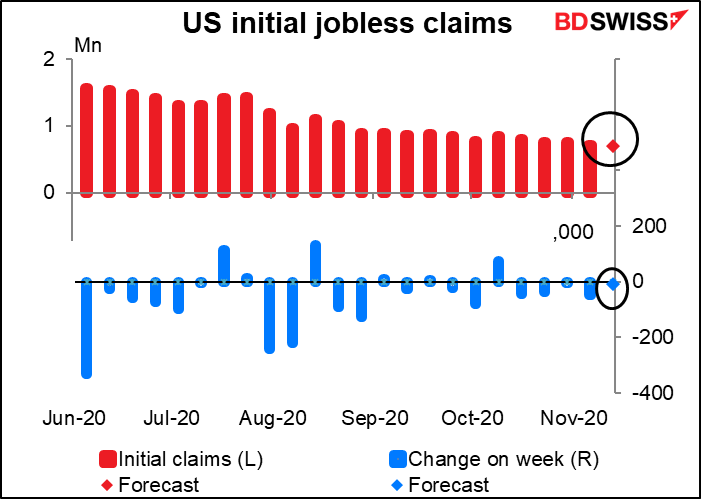 Continuing claims are expected to be down 386k. This compares with -436 last week and a 4-week moving average of -653k, so this figure too would indicate a slowdown in the pace of improvement. 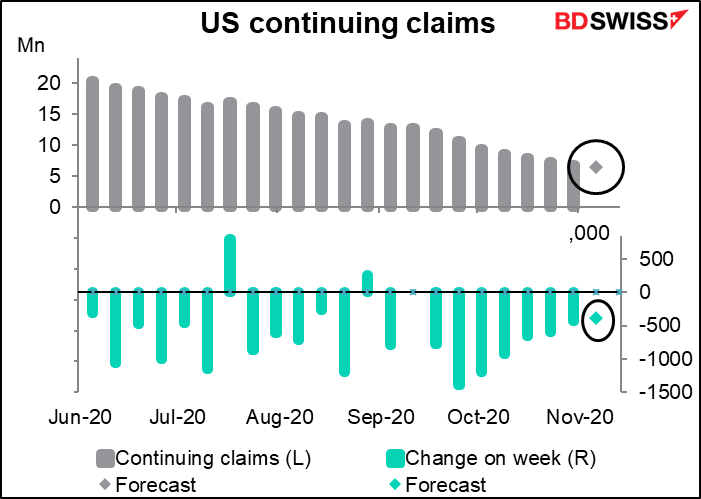 Next up is the Philadelphia Fed business outlook index. Monday’s Empire State index was supposed to be up by 3 points but instead was down by 4.2 points. Today’s figure is supposed to be down by 9.8 points anyway, to 22.5. That’s a decline, but still in expansionary territory. Moreover 22.5 isn’t bad; its average during 2019 was 9.9. Nonetheless, both indicate that while the recovery is continuing, it’s also slowing. That should in theory be a “risk-off,” negative factor, but I wonder if people are paying attention to the indicators now or just focusing on vaccine news. 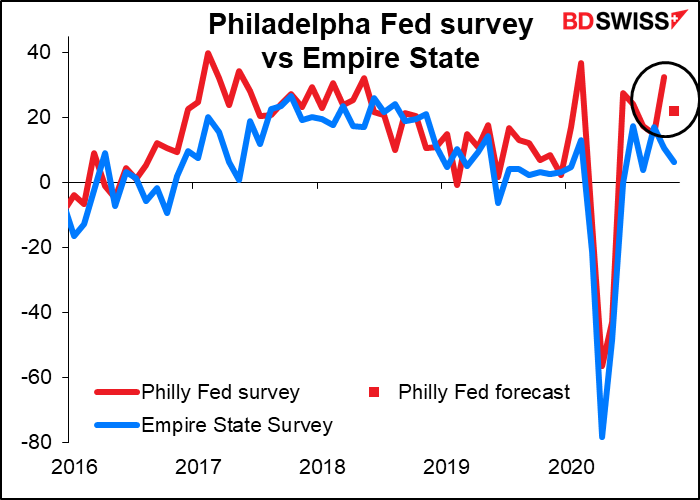 The market is looking for a small decline in sales of existing homes. That wouldn’t come as much of a shock, seeing as how strong the recent sales have been — +9.4% mom the previous month, for example. Next week’s new home sales (25 Nov) on the other hand are expected to be up by 1.1.%. Either way, sales of both kinds of homes are the highest they’ve been since around 2006, so a small decline is nothing to worry about. 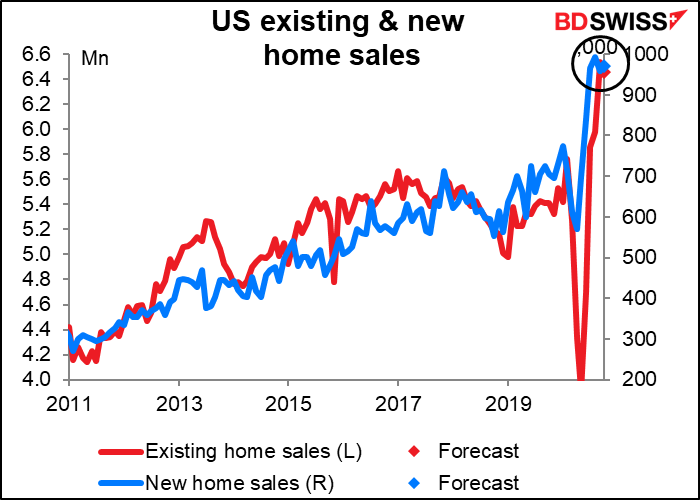 The US leading index is starting to return to normal levels. The March reading of -7.4 was an 11-standard-deviation event – on average, the absolute value of the index over the last decade has been 0.54. Last month and this (forecast) month represent somewhat of a return to normality. On the other hand, maybe normal isn’t good when activity remains so far below normal. 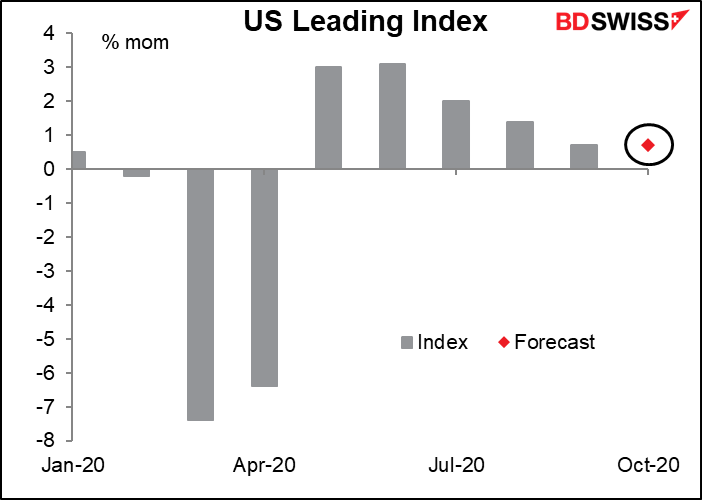 Then overnight we come to the King of Useless Statistics (or was it the Queen? I can’t remember):  the Japan national consumer price index (CPI). It’s useless for two reasons: a) the Tokyo CPI comes out about three weeks earlier and pretty much follows the same trend, and b) the Bank of Japan isn’t going to do anything anyway, so what does it matter?

Looking at the Bloomberg relevance scores, the order of market interest is:

The figures this time are likely to look alarming, but we already knew that from the fall in the Tokyo CPI. The big reason for the drop is that the impact of last year’s hike in the consumption tax falls out of the calculation this month. Furthermore, oil & petroleum product prices are falling. And finally, the government’s “Go To Travel” campaign was extended to cover travels to and from Tokyo. That’s especially important for me as my wife, who’s Japanese, recently flew to Japan and is currently quarantined in a fancy hotel in Tokyo that would be costing me an arm and a leg if it weren’t for the 35% discount we’re getting (part of the agreement is that we’re not allowed to mention the name of the hotel on social media because they don’t want the other customers to know that people are quarantining there).

Because of those special factors, we can’t really say that inflation has slowed much. Accordingly I don’t think the Bank of Japan will react to the numbers even if it does appear that Japan has fallen back into deflation. 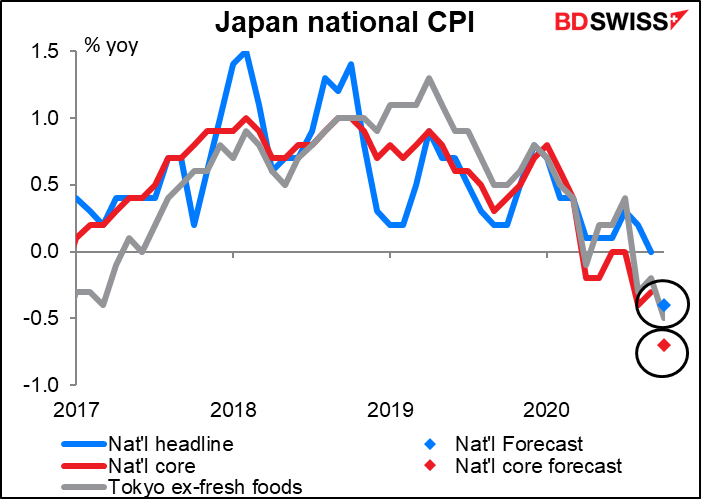 Later, we get Japan’s preliminary purchasing managers’ indices (PMIs). The rest of the preliminaries will come out on Monday, but that’s a holiday in Japan. As usual there are no forecasts for Japan’s PMIs. We will be waiting to see if they manage to poke their noses over the 50 line. 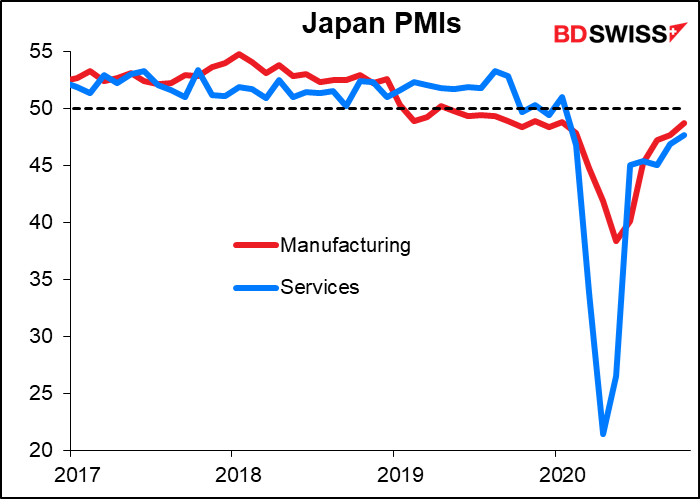 The Eco Watcher’s Survey has returned to a level consistent with the service-sector PMI over 50, but you never know – it seems to me that the Eco Watchers is more volatile than the PMI is. 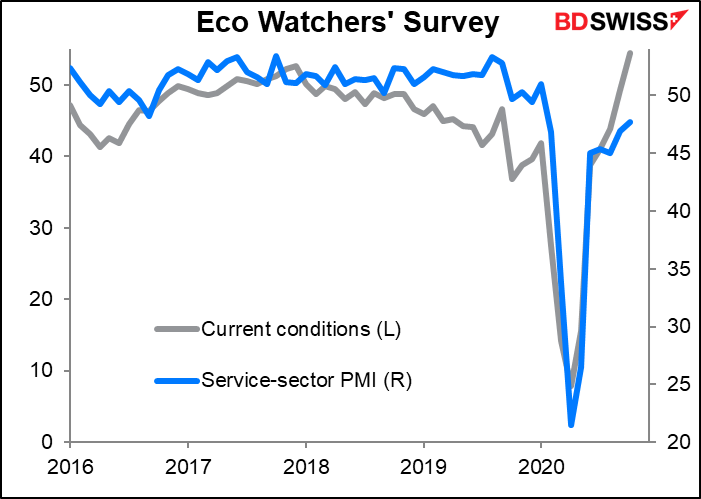 Then once again as the day starts in the UK on Friday, Britain will announce its retail sales figures. The retail sales figures may present a problem for sterling. Sales are expected to register their first mom decline since April, and what with restrictions being reimposed across the country, it’s likely that they’ll fall further from here. 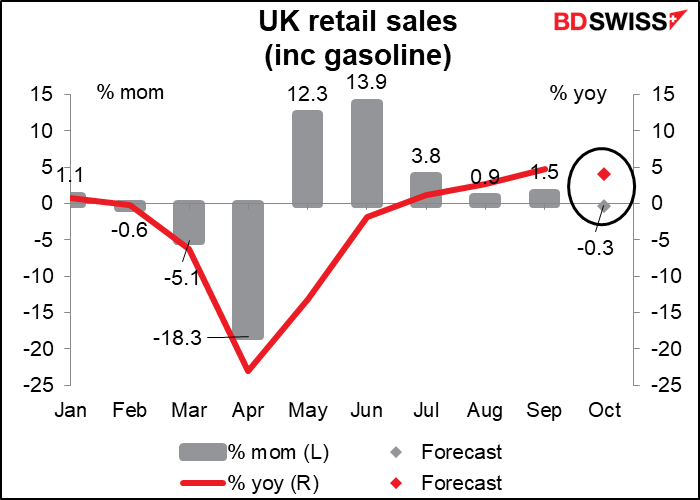 That said, just as in the US, sales have held up well so far – on the basis of the consensus forecast, they’re expected to be 4.8% above the pre-pandemic level as people continue shopping online. 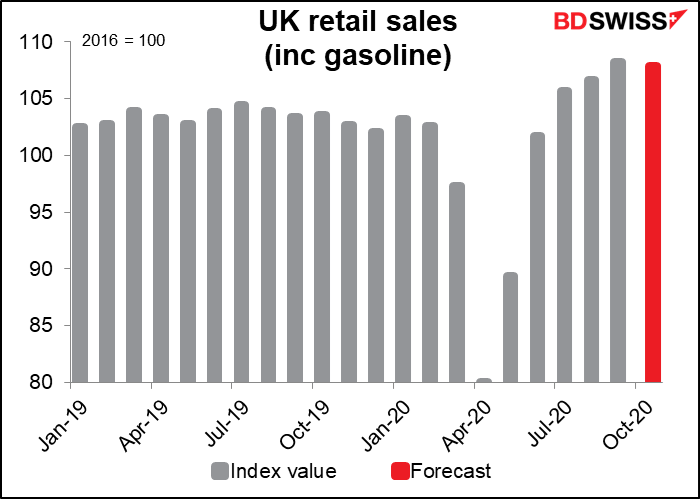 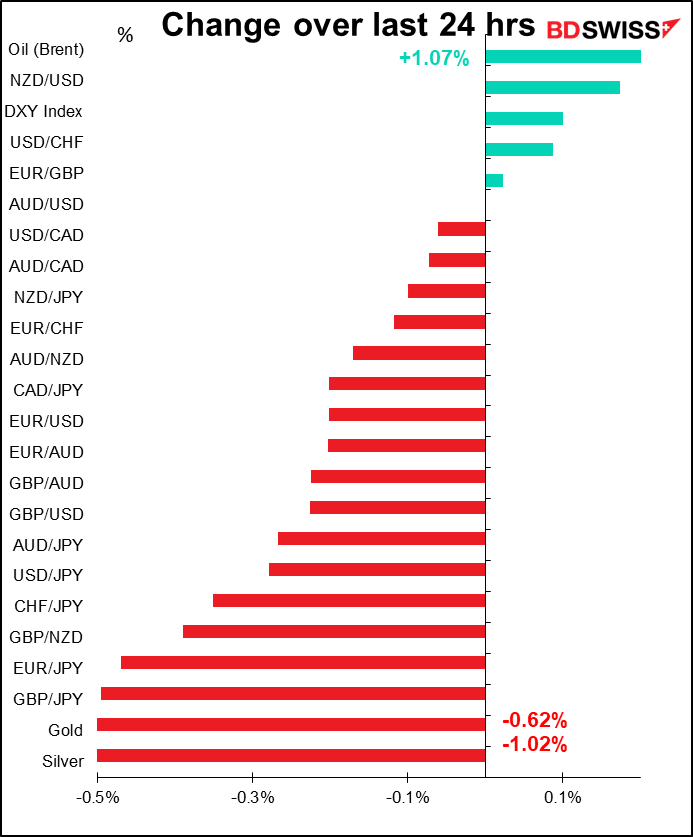