You are at:Home»MARKET PREVIEW»JPY Up, Commodity Currencies Down as more Central Bankers talk about tightening; French election, preliminary PMIs 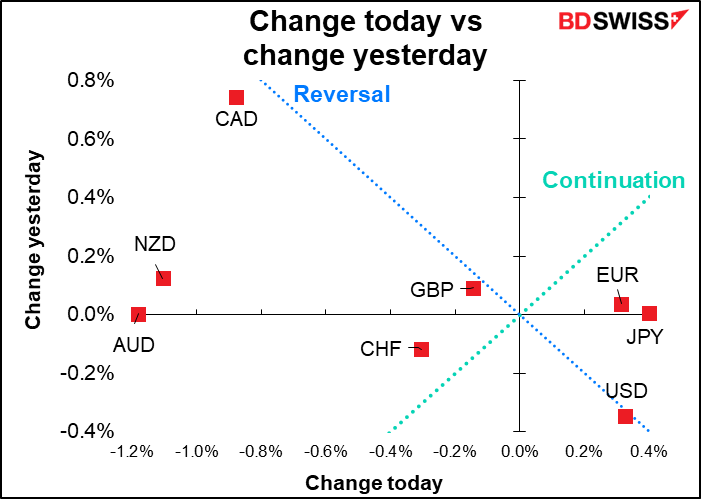 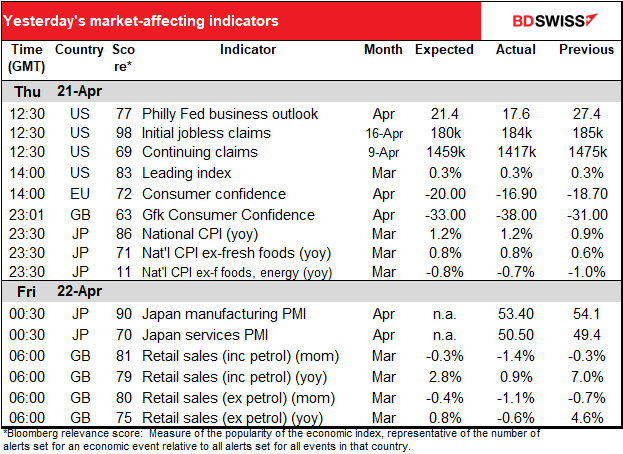 US Fed Chair Powell gave the markets a kick when he suggested the Fed is likely to hike 50 bps at next month’s meeting and may tighten policy past neutral. “It is appropriate in my view to be moving a little more quickly,” the Fed chair said at a panel discussion hosted by the IMF. “We make these decisions at the meeting and we’ll make them meeting by meeting, but I would say that 50 basis points will be on the table for . . . May.” “We’re really going to be raising rates and getting expeditiously to levels that are more neutral and then that are actually tightening policy if that turns out to be appropriate once we get there,” he added.

SF Fed President Daly (NV), one of the more dovish people on the rate-setting Federal Open Market Committee (FOMC), even said a 75 bps hike would likely be debated, although she didn’t seem too keen on the idea. The hawkish St. Louis Fed President Bullard (V) also wouldn’t rule out a 75 bps hike. 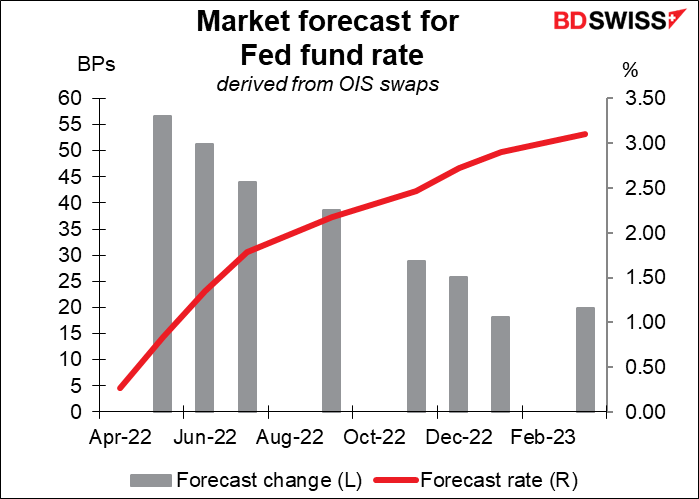 FYI today is the last day for Fed officials to speak publicly before the “blackout period” begins on Saturday. Fed officials aren’t allowed to speak about policy starting from the second Saturday before an FMOC meeting.

And Bank of England Monetary Policy Committee member Katherine Mann, who voted for a 50 bps hike back in February, suggested that one might be necessary now. “We can look at whether or not an additional 25 basis points or more might be necessary in order to keep inflation anchored,” Mann said in response to questions after a speech yesterday.

With comments like these, is it any wonder that bonds sold off further (i.e. yields rose)?

Note that this time around, higher interest rates didn’t necessarily provide support for currencies. On the contrary, the risk-off tone caused the yen to rise. There was no doubt some profit-taking after its recent sharp decline. Short JPY Is the speculative community’s largest position, according to the Commitment of Traders report. 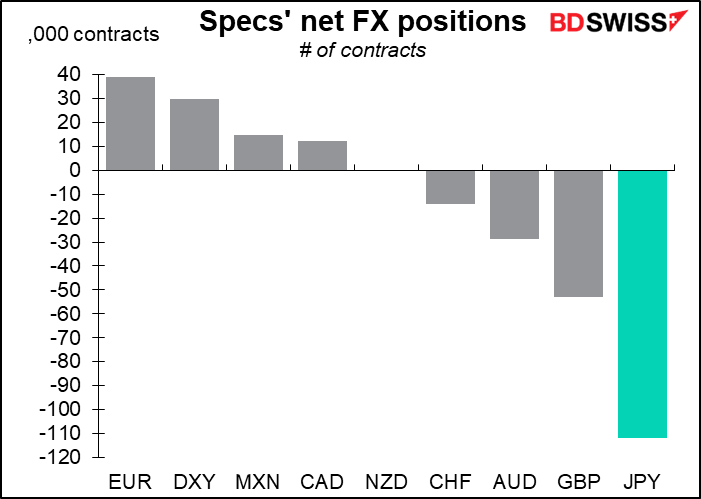 I don’t think the yen is out o the woods yet by any means. Japanese Finance Minister Suzuki said FX was not a major topic of discussion at the G7 meeting in Washington yesterday. This implies that there’s little chance of a coordinated intervention to stem the yen’s decline. While Suzuki and BoJ Governor Kuroda again expressed concern regarding the yen’s recent rapid move, there doesn’t seem to be much risk of intervention at this point.

The counterpart to the yen strength was weakness in the commodity currencies, especially AUD. The determination of central bankers to slow the economy enough to cool demand is negative for the outlook for commodities.

Having said that, commodity prices weren’t necessarily lower, which suggests that it was sentiment moving the FX market more than anything. 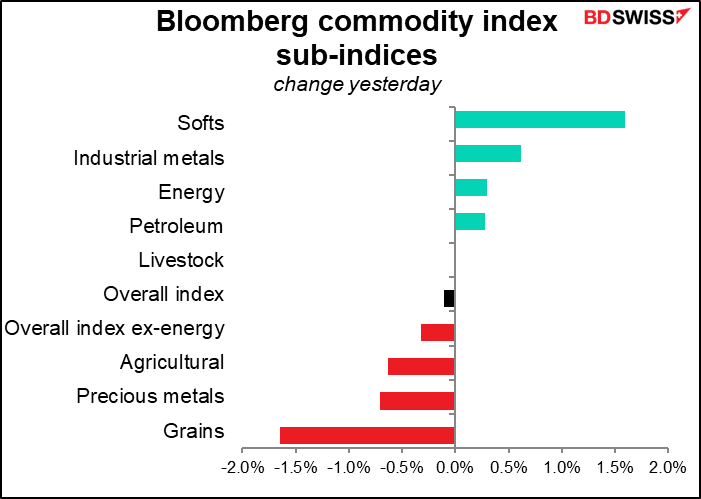 France goes to the polls Sunday to vote for President. The chance of a surprise win by right-wing candidate Marine Le Pen have fallen recently as the polls move in President Macron’s favor. Politico’s poll of polls gives Macron a 10 percentage-point lead over Le Pen, which while not as large as his margin of victory in 2017 is still a win. 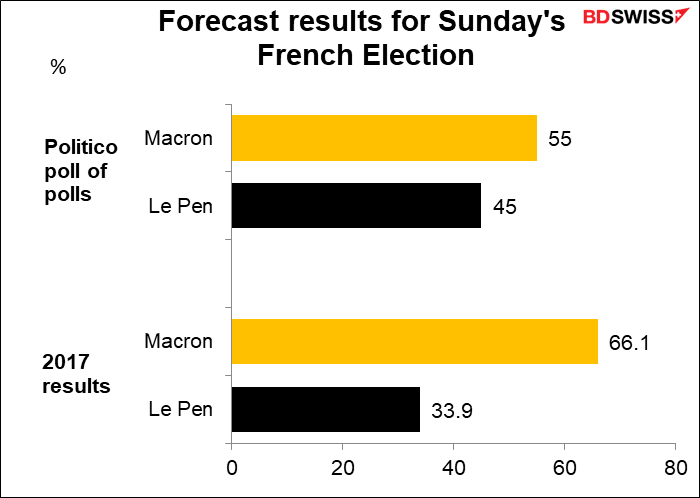 The markets have been less and less concerned about the election since the results of the first round of voting. There could still be a little “relief rally” in EUR at the start of trading Monday if and when Macron clinches it. After all, everyone remembers that Trump was given only a 30% chance of winning. 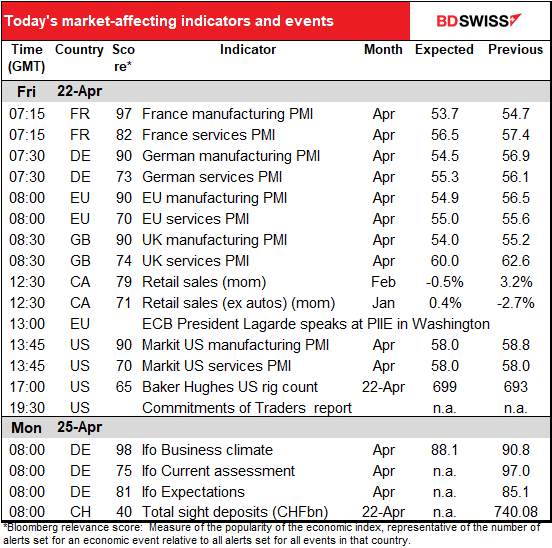 By and large it’s purchasing managers’ index (PMI) day today. We get the preliminary version of the PMIs for the major industrial countries, plus a few others that people don’t really pay attention to.

The Japanese PMIs are already out. As shown in the table above, the manufacturing PMI fell but the service-sector PMI managed to climb back above the 50 line signaling expansion.

As I said yesterday, the figures are expected to be lower almost across the board, with only the US service-sector index forecast to show a small rise. German manufacturing and UK services are forecast to show particularly steep declines, although I’m not sure how significant that is in the case of the UK – even after the forecast 2.6-point decline in their service-sector PMI it would still be the highest of the group. PMIs don’t go up forever. The expected fall in German manufacturing PMI would be more significant as it would put Germany below the PMI for the EU as a whole, rather than above. 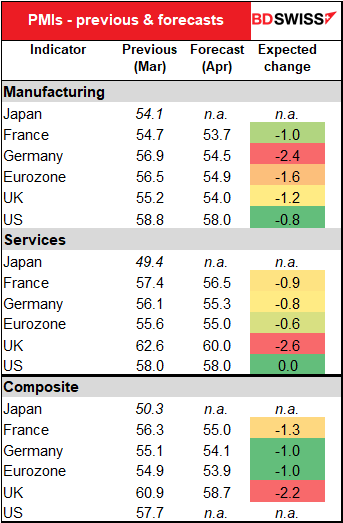 Aside from that, Canadian retail sales are coming out. The preliminary estimate was down 0.5% after a solid 3.2% gain in January. However that includes the almost 20% yoy decline in auto sales (no mom change available, probably because the figures aren’t seasonally adjusted). So the market is expecting a 0.4% mom decline for the headline figure but a 0.4% mom gain for sales excluding autos. Consumer demand has risen thanks to the strongest labor market in decades, as well as considerable savings accumulated during the pandemic.Moreover inflation alone should push up the nominal value of sales. 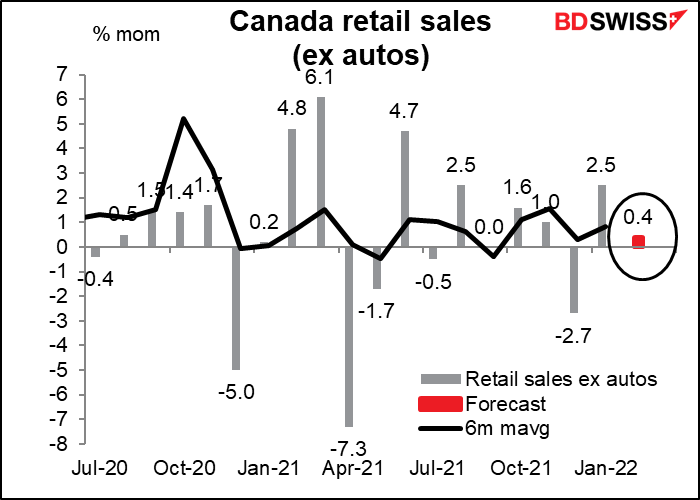 Early Monday, Germany’s Ifo Institute releases its closely watched indices, which are much like PMIs but not quite. However there are no forecasts for them at this time so not much I can say. 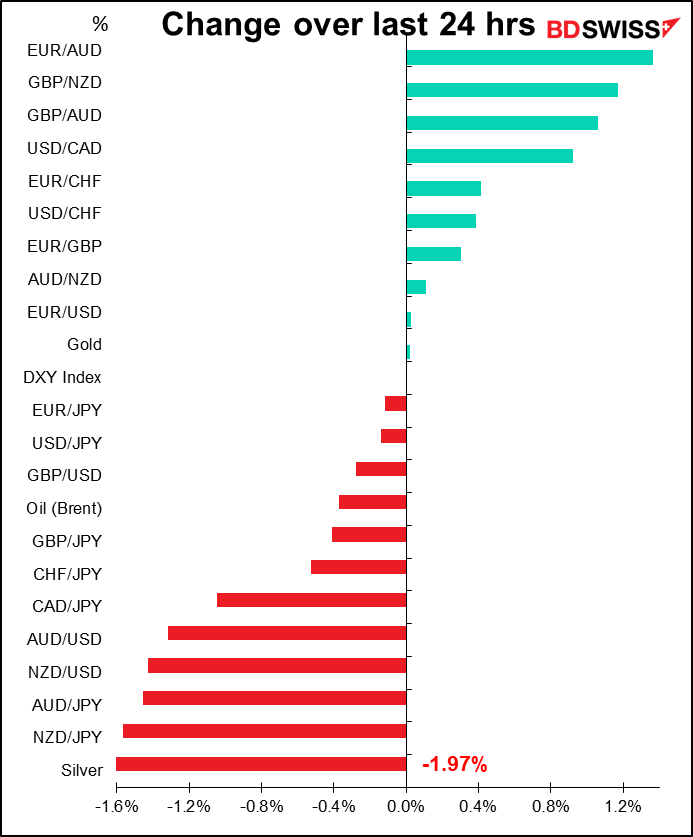