You are at:Home»MARKET PREVIEW»JPY up, AUD Down on Fears of China virus; UK Employment data 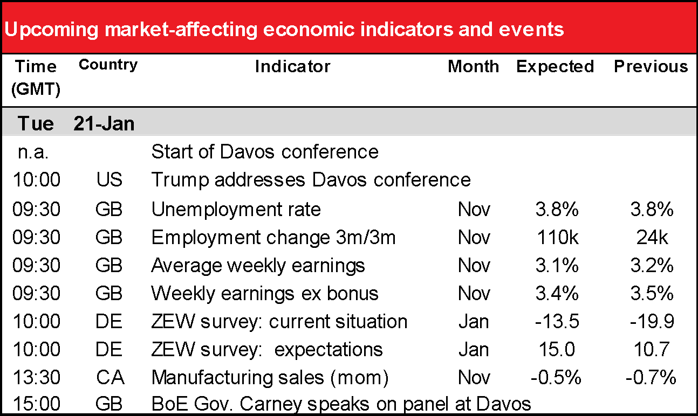 JPY was the biggest mover on a trade-weighted basis. The move had nothing to do with the Bank of Japan (BoJ) meeting, which finished about two hours after the big move in the currency. Instead, it was entirely due to a sharp fall in the RMB (I’m using CNH in this graph and have inverted it). The RMB fell sharply on worries about China’s coronovirus after a government panel confirmed that it could spread by human-to-human transmission. Friday is the start of the Lunar New Year in China, which sees the greatest migration of people on earth as hundreds of millions of people travel back from the cities to their villages. This is the perfect opportunity for the virus to spread across the country. Shades of Sars!!! So far though the virus seems to be much less deadly than Sars, but still, it doesn’t sound like fun. 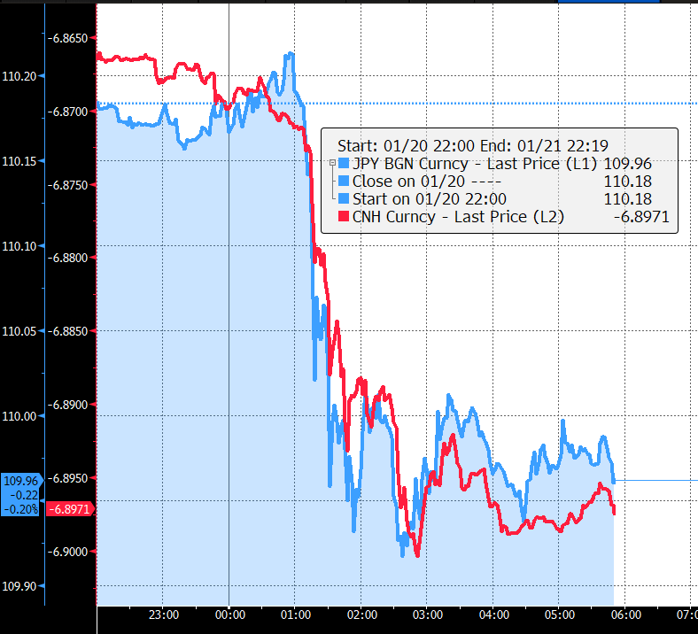 We can use the exact same graph to explain the movement of AUD (red line): 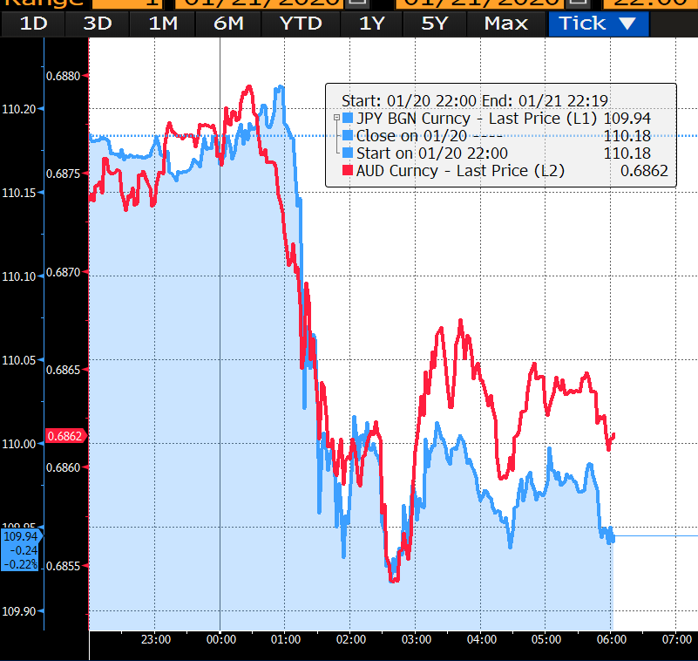 In any event, the BoJ remained on hold, as virtually all economists expected. There was no change in its forward guidance or its targets for rates or asset purchases. It did revise its growth outlook up slightly, reflecting the expected boost from fiscal stimulus, and lowered its inflation forecast minimally over the three-year forecast period. In other words, no change in stance, no big change in the outlook, no major effect on the currency.

GBP was higher even though UK PM Johnson suffered his first loss in a Brexit-related bill. The House of Lords rejected several amendments to the Withdrawal Agreement Bill (WAB). My guess though is that it’s economics, not politics, that’s moving GBP for once. I think people have turned slightly more optimistic ahead of today’s UK labor market data, which is expected to show the unemployment remaining at its 45-year low (see below).

The World Economic Forum at Davos begins today. The Great and the Good from around the world will be assembled here until Thursday – I’ve heared that 1,500 private planes fly in so the grandees can discuss global warming and other big issues. Bloomberg, CNBC, Reuters and every other news agency will be trying to corner these folks and get them to appear on air, plus many of them will be participating in panel discussions (such as Bank of England Gov. Carney on today’s panel about “Solving the Growth Equation”).Sometimes some people make market-affecting comments. Sometimes they make effective comments. Hear Historian Rutger Bregman berate the billionaires about tax avoidance:  https://www.youtube.com/watch?v=r5LtFnmPruU There’s likely to be a lot of talk about philanthropy, but not much about why wealthy people should pay more in taxes.

Trump is expected to address the assembled masses today. No idea what he’s going to talk about – perhaps Iran and NATO? Or dish washers again? I wonder if any of the non-US press will be less deferential than the captive US press and comment on Trump’s obvious physical and mental deterioration:  his odd gait, his difficulty standing unsupported, his inability to speak coherently. Plus signs of drug abuse:  his dilated pupils and incessant sniffling while talking. 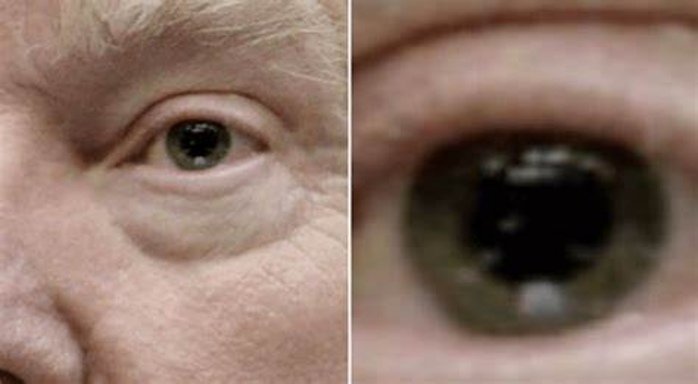 As for today’s indicators, we start off with the UK labor data. The odds of a rate cut at next week’s Bank of England meeting have been increasing recently as the economic data shows further deterioration – Friday’s retail sales figures for example were disappointing, showing a month-on-month drop instead of the expected rise.

Today’s labor data though is expected to be reassuring – employment is expected to have grown at a pace well above the recent depressed trend, while the unemployment rate is forecast to remain at the decades-low 3.8% rate (Before last year, the last time it was down at 3.8% was January 1975.) 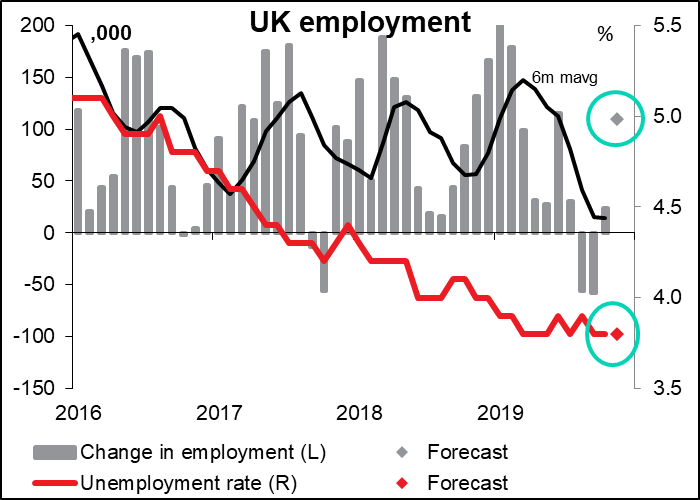 Wage growth though is expected to slow further as a result of several public-sector wage settlements, which tend to be lower than those in the private sector. That may compound worries about the health of the consumer. 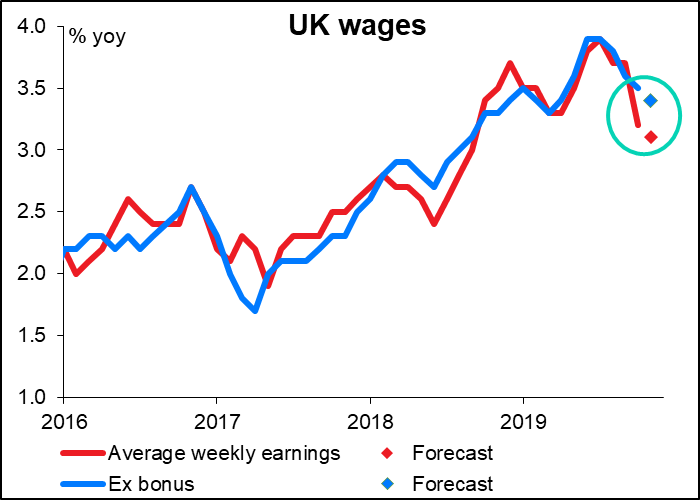 My feeling is that these data will probably be neutral for the pound – that the large rise in employment may be explained away as simply mean-reversion after four months of job losses or low employment growth (like what happened in June) and not the start of a new trend in hiring. However they don’t show any deterioration in the employment situation either, which is reassuring. Most of all though this is November data – the market is probably more interested in Friday’s purchasing managers’ indices for January, which are obviously more up-to-date and will reflect post-election sentiment.

The ZEW survey of analysts, economists and other useless types is forecast to show a continued improvement in sentiment towards the German economy. The indices for both the current situation and expectations are forecast to improve, largely at the same pace so that the difference between the two stays roughly the same. But at least that difference is positive, meaning that people expect the German economy to improve. EUR positive 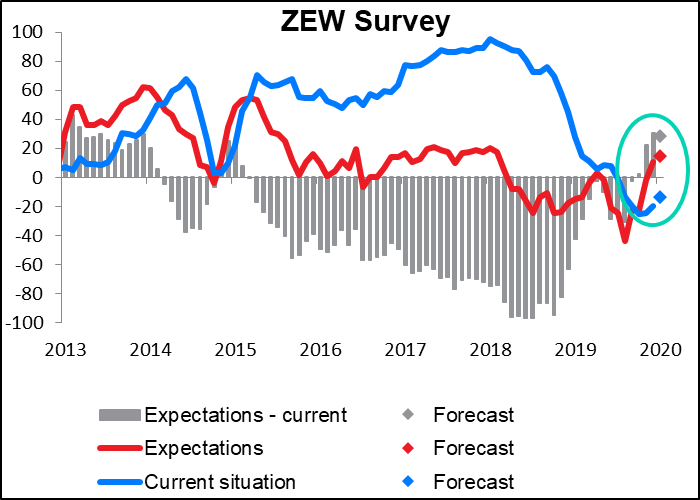 Canada’s manufacturing sales are expected to be down for the second month in a row. This would send the six-month moving down further into negative territory as the rebound in May falls out of the calculation. Given the Bank of Canada’s focus on the health of the consumer – it said its decisions would be based on “the sources of resilience in the Canadian economy – notably consumer spending and housing activity” — this might be cause for some concern at tomorrow’s Bank of Canada meeting. CAD negative 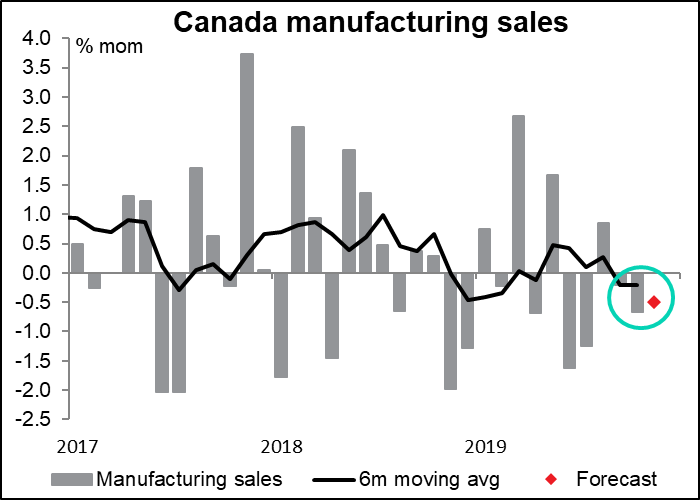 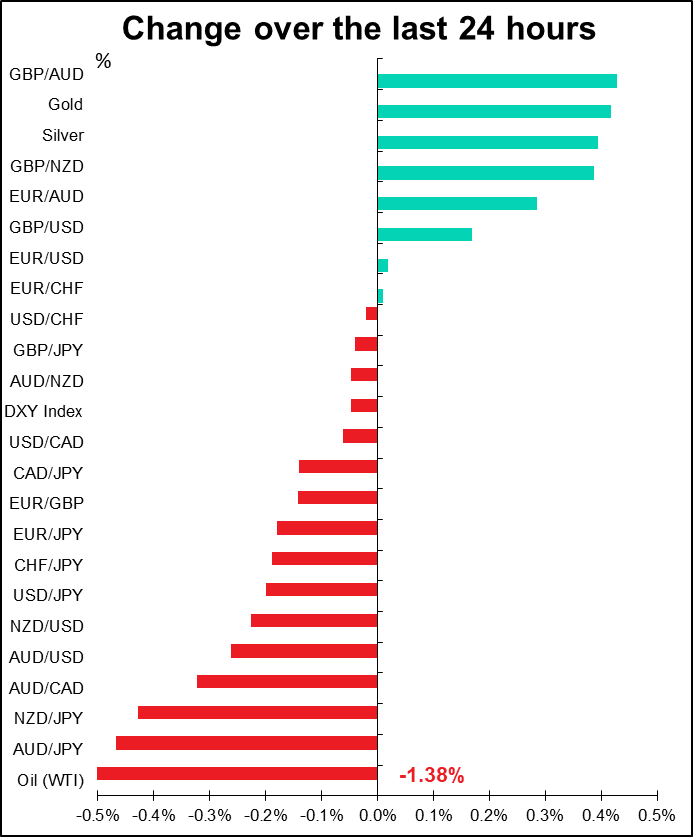