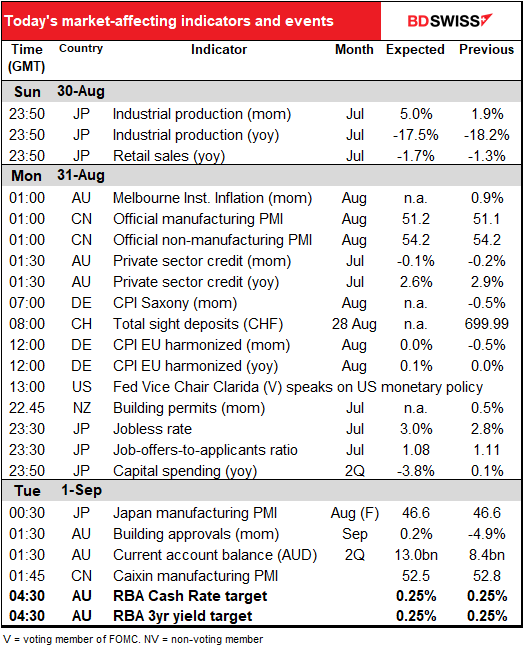 Japan PM Abe unexpectedly resigned on Friday, causing Tokyo stocks to decline and the yen to rise on a “risk-off” mood. Abe has been in office longer than any other Prime Minister in Japan and so his resignation is a Big Deal for the markets. I’ve written a special piece on the implications of the resignation, which you should be receiving shortly. The gist of it is that there will be a period of uncertainty and therefore probably a stronger yen for a couple of weeks, but the ruling Liberal Democratic Party (LDP) is likely to replace Abe with someone with similar views and policies, so longer-term not much will change. Moreover, the main factor for the yen is Bank of Japan policy and that won’t change until BoJ Gov. Kuroda’s term ends in April 2023. There is a risk though that foreign investors get fed up and start to sell their Japan stocks, causing an outflow of funds and a weaker currency.

Overnight indicators: The news out Monday morning in Asia was generally good. Japan industrial production beat estimates (+8.0% mom vs +5.0% expected) although retail sales missed (-2.8% yoy vs -1.7% expected). But the Japanese economy is based on production, not consumption, so the IP figures carry more weight than retail sales. We can see this from the Bloomberg score for these indicators: IP Is the most closely watched of all the Japan indicators, as 99% of all people who watch Japan indicators have an alert set for it, vs only 74% for retail sales.

More importantly, China’s official non-manufacturing PMI beat estimates, jumping to 55.2 from 54.2 (it was expected to be unchanged). The August figure is the highest since January 2018. Manufacturing fell 1 tic instead of rising 1 tic, so although it missed, it was nothing major (51.0 vs 51.2 expected, 51.1 previous). 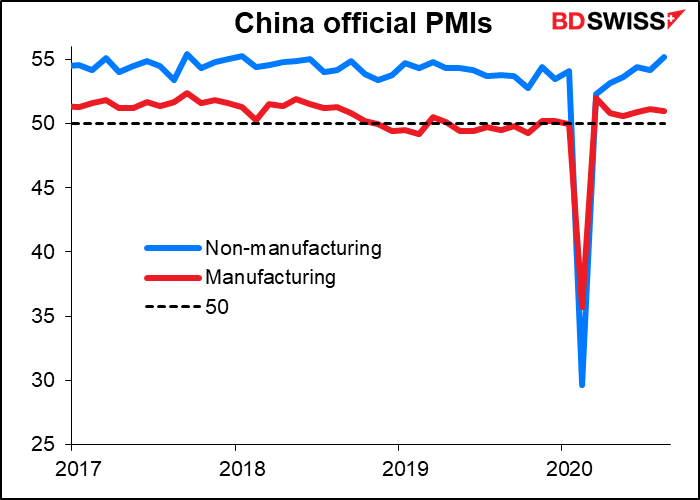 The good news from China, plus expectations that the change in Fed policy will lead to US rates staying near zero for the remainder of the Holocene epoch, have encouraged a risk-on mood this morning. Most Asian stock markets are higher, including Tokyo, which regained all of Friday’s losses and then some. But USD/JPY has only recovered slightly (105.63 vs 105.37 at the end of trading in NY on Friday). There could be further gains today as press reports in Japan discuss the maneuvering and politicking going on behind the scenes to determine the next PM. As more clarity emerges about the likely winner, stocks should settle down and USD/JPY return to where it was. But that may take some time and any uncertainty will feed through to a lower USD/JPY.

It’s noticeable that in today’s risk-on market, NZD has once again outperformed AUD. That could be because Auckland, New Zealand’s largest city, has exited lockdown after a virus outbreak there was brought under control.

I mentioned in today’s Positioning Report that It’s noticeable that their view on AUD is starting to become more pessimistic relative to the other two commodity currencies. Looking at the relative AUD and NZD positions, after being fairly flat for a few weeks, the market is starting to take a more bullish position toward NZD than AUD. But that hasn’t been reflected in the price of AUD/NZD yet.

AUD is being depressed by news that China is probing Australian government subsidies to wine producers, an obvious retaliation for Australian complaints about China. 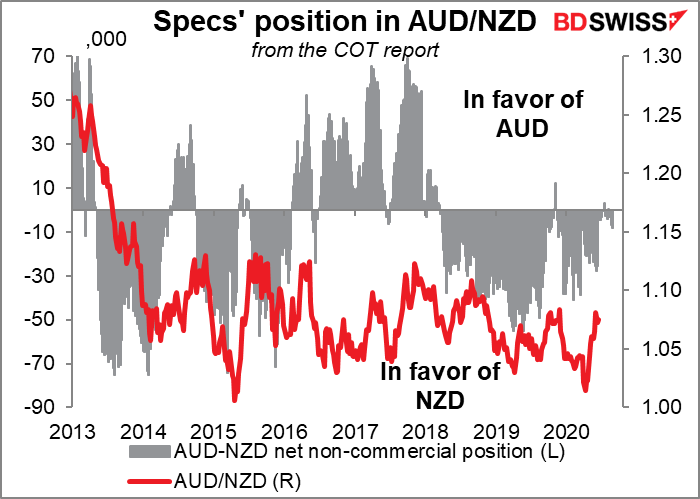 Elsewhere though the market is still more bullish AUD than NZD. The AUD/NZD risk reversal, which is usually around zero, has been creeping up recently, indicating that some market participants expect AUD to outperform NZD. This makes sense to me in that the Reserve Bank of New Zealand (RBNZ) has the looser monetary policy – they are preparing for negative interest rates and have even been talking about buying foreign assets as part of their monetary policy, whereas the Reserve Bank of Australia has pretty much ruled out even negative rates. 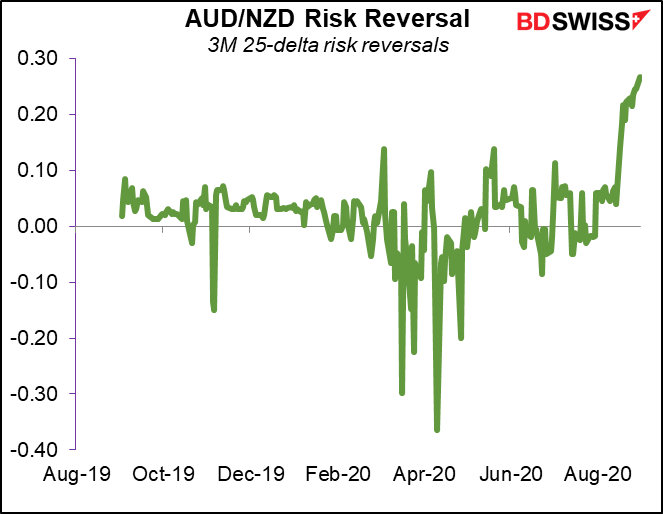 GBP was higher despite Friday’s dovish comments from Bank of England Gov. Bailey, who spoke as part of the Jackson Hole symposium. He said the Bank has room for more stimulus, noting “we are not out of firepower by any means, and to be honest it looks from today’s vantage point that we were too cautious about our remaining firepower pre-Covid. But, hindsight is a wonderful thing when you have it.” I wonder if other central bankers are also thinking the same thing. Furthermore, the approval rating for PM Boorish Johnson’s government is falling as UK virus cases reach the highest since early June. It’s hard for me to discern just what is supporting the currency. 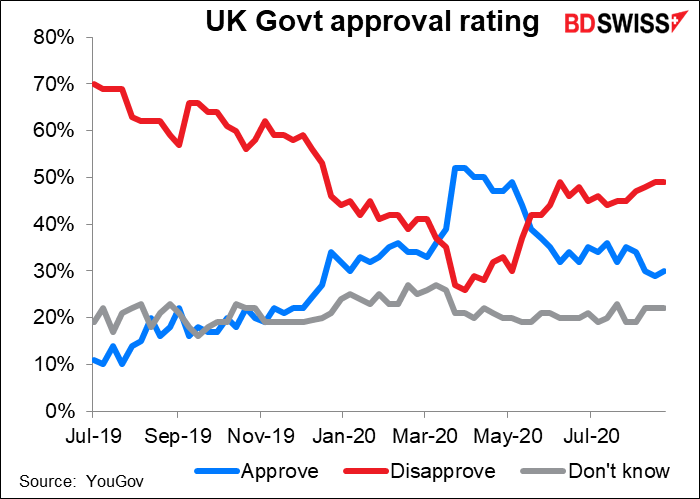 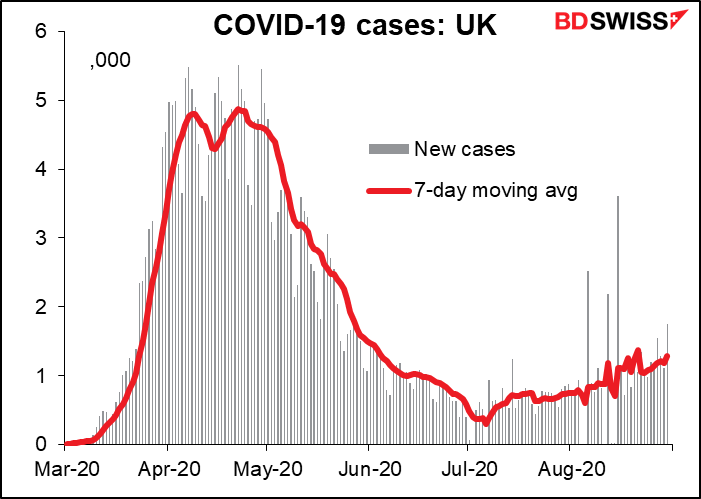 Two main things on the schedule for today:  German inflation one day ahead of EU-wide inflation data, as usual, and overnight the Reserve Bank of Australia (RBA) meets. Let’s briefly discuss the RBA first, then the indicators in order.

With AUD fairly stable and the benchmark 3-year yield trading only a basis point away from their 0.25% target, the Board has little reason to take any action at this meeting. High-frequency data released since the 4 August meeting have mostly confirmed the RBA’s expectations about the cost of Melbourne’s second lockdown, which implies little change in their assessment of the economy.

I assume that they’re going to remain on hold and I would look for a comment in the minutes similar to this one that appeared in the minutes of both the July and August meetings:

“…members agreed that there was no need to adjust the package of measures in Australia in the current environment. Members agreed, however, to continue to assess the evolving situation in Australia and did not rule out adjusting the current package if circumstances warranted.”

Given how little has changed, the main point of interest will probably be the RBA’s judgment of how 3-year yields have moved after it restarted bond purchases on 5 August in defense of its 0.25% target – a target that I didn’t think was being breached to any significant degree, but that’s just my view. The renewed buying only lasted eight days anyway. 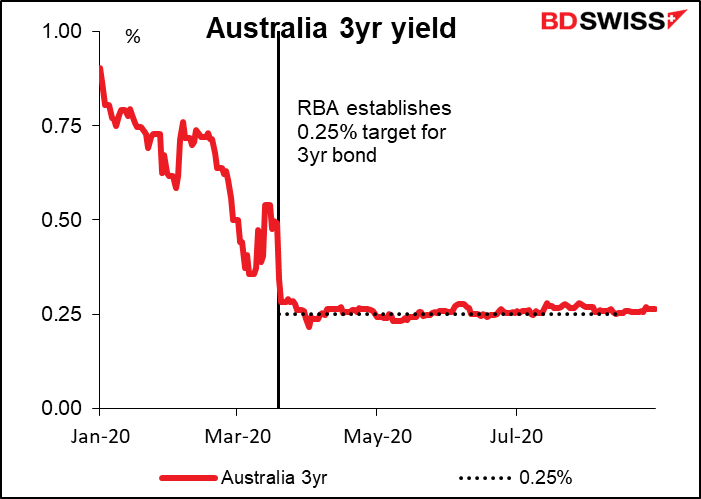 OK, with that out of the way, let’s get back to German inflation. It’s expected to be unchanged from the previous month – I guess an improvement from -0.5% mom the previous month, but still hardly encouraging – and the yoy pace is expected to pick up to just into positive territory. Continued low inflation in Germany – and therefore the Eurozone – may increase speculation about the ECB taking further easing measures at its 10 September meeting (see my Weekly Comment for details.) 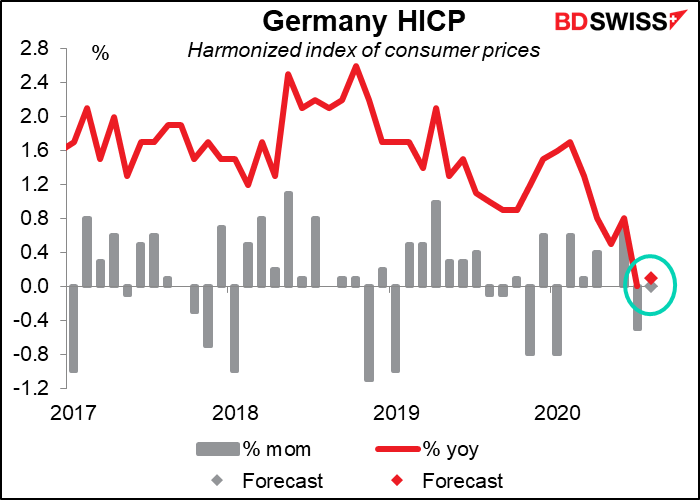 Overnight we get Japan’s unemployment data. The situation seems to be better than most other countries, but a lot of it is just smoke-and-mirrors as special furlough support payments and housewives leaving the workforce artificially hold down the unemployment rate. The collapse in the job-offers-to-applicants ratio is a better indicator of what the real situation is. Still, expected the ratio of 1.08 is better than the US version, which works out to a disastrous 0.22. 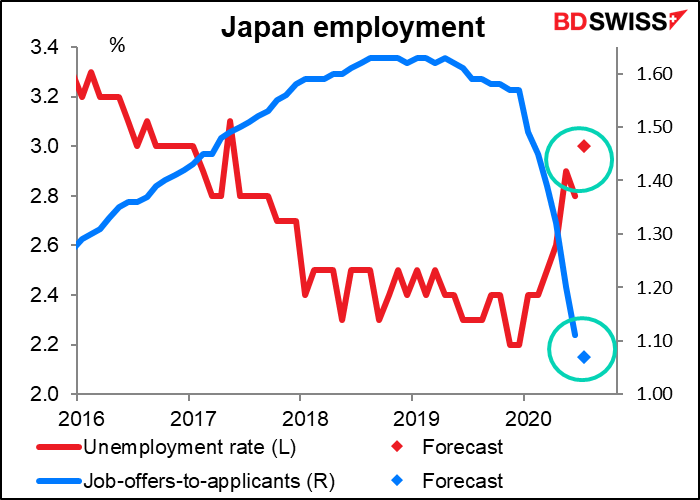 Japan capital spending is expected to have fallen in Q2, but everything in the world fell in Q2 so I’m not surprised. In fact the expected 3.8% yoy fall seems pretty modest to me. 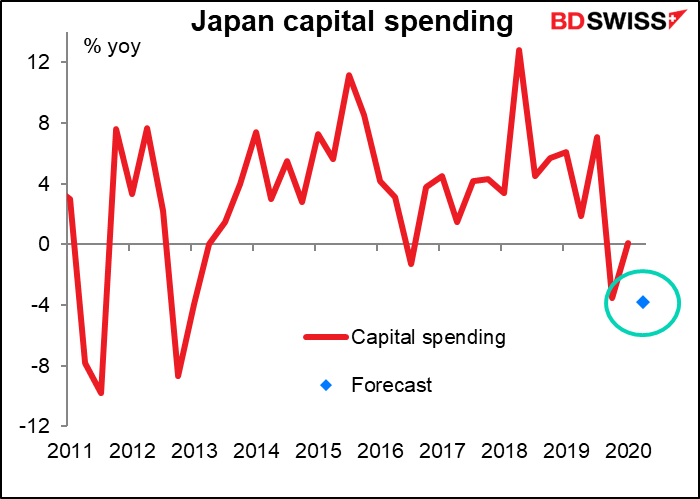 Then shortly afterward we get the final Japan manufacturing purchasing managers’ index (PMI). Japan is an outlier with its PMIs still stuck well below 50. It might be revised up a bit but will still be showing contraction, I would imagine.

In any event, I think the impact of all these Japan indicators will be overshadowed by the resignation of Japan PM Abe and the ongoing fallout from that. See our special piece about that event.

Australian building approvals and current account may have some impact on the market despite coming out a few minutes before the RBA meets, especially since the RBA is likely to be on hold and therefore not a decisive factor for the market.

Building approvals are expected to be down for the fifth month in a row, albeit not by as much as in previous months. 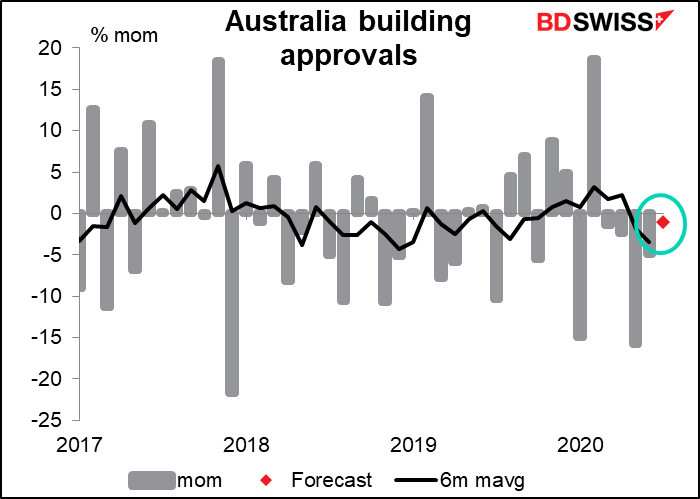 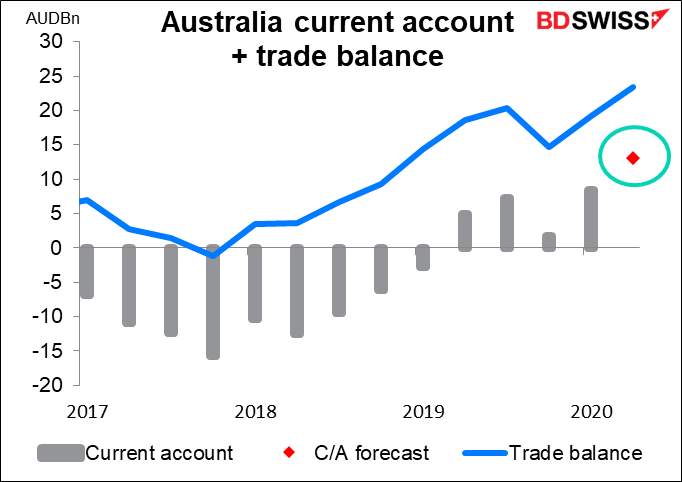 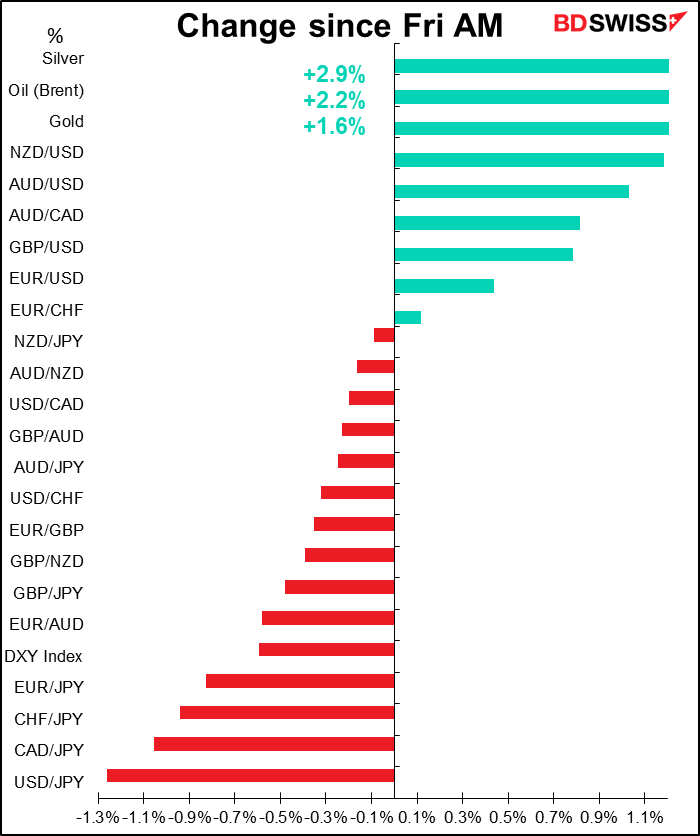