You are at:Home»MARKET PREVIEW»JPY & CHF Down on “Risk On,” GBP Up on Good Employment Data; UK CPI, FOMC Minutes 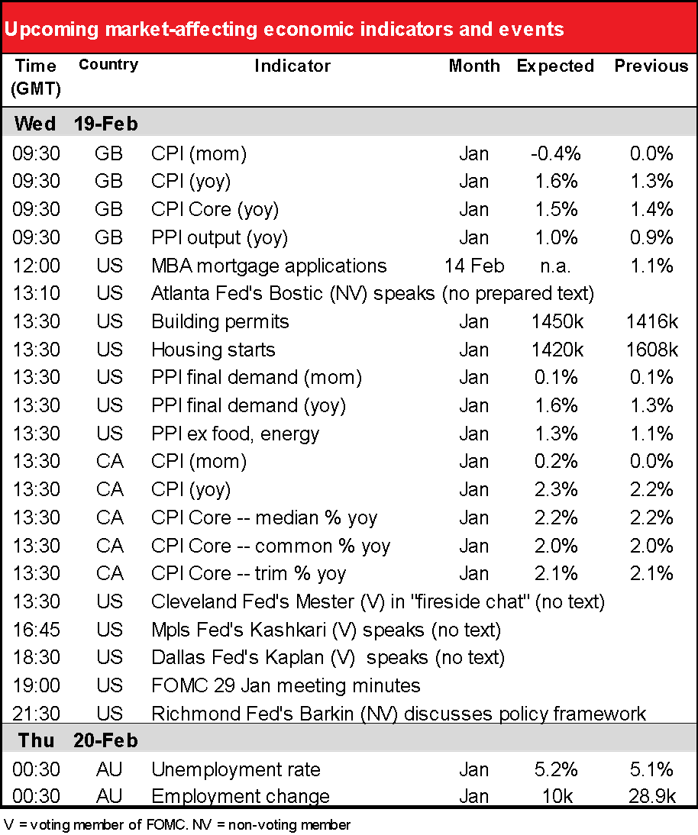 Generally a “risk on” day after China announced it was considering more stimulus measures to support the economy, such as exempting small- and medium-sized enterprises from paying pension contributions until June. Asian markets are up almost across the board. Hence AUD higher, JPY and CHF lower.

In that case, the fall in NZD needs to be explained, and frankly, I can’t. AUD was under pressure after S&P Global Ratings said Australia is one of the economies facing a “material knock to growth” from the virus and its impact will force the Reserve Bank of Australia (RBA) to cut rates twice this year. At the moment the market is pricing in a little over one cut this year. In New Zealand by contrast is pricing in only ¾ of a cut. So why did AUD/NZD move up on this news? NZD fell througout the day yesterday. A sharp fall in the price of milk at the latest auction may have helped, but it was moving lower even before then. In any case, the milk price hasn’t been a dominant factor for NZD for some time now – probably it’s more monetary policy. Which may be why NZD stopped falling after the Reserve Bank of New Zealand (RBNZ) published some comments from Gov. Orr saying that policy is “in a good position.” I don’t understand why the currency weakened so much vs both USD and AUD – I’d expect to see some profit-taking today, particularly in AUD/NZD. 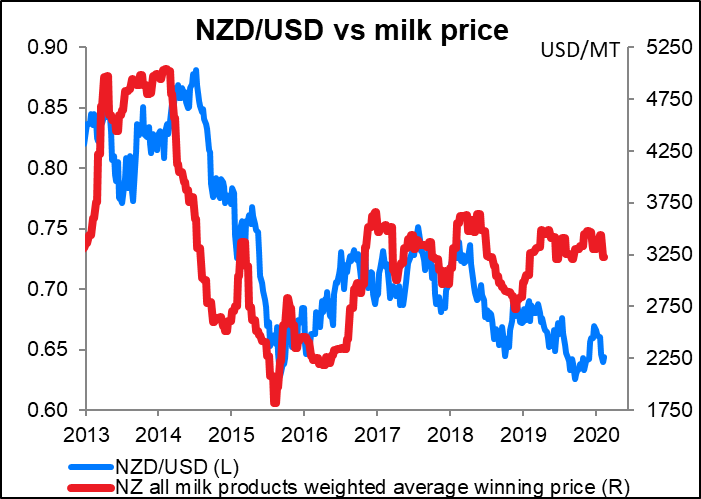 It’s nice to see economics beating politics as a market-mover for once. GBP fell on Monday due to Brexit worries, but it bounced back Tuesday after the UK employment figures beat expectations: 180k new jobs vs 148k expected (208k previously), and all of these were full-time jobs. The unemployment rate stayed at 3.8% as expected. Average earnings were a bit disappointing: up 2.9% yoy vs +3.0% expected, (3.2% yoy previously), but the Monetary Policy Committee (MPC) noted in January that it expects compositional and base effects to depress wage growth for now (more people who’ve been unemployed for a long time have been getting jobs recently, and that tends to put less upward pressure on wages than if companies are hiring newly unemployed people). The MPC estimates the “long-term equilibrium unemployment rate” is around 4 ¼%, meaning that unemployment is still below its equilibrium level = upward pressure on wages should continue.

Today we’ll get the UK inflation data, which I expect to be neutral for GBP (see below). 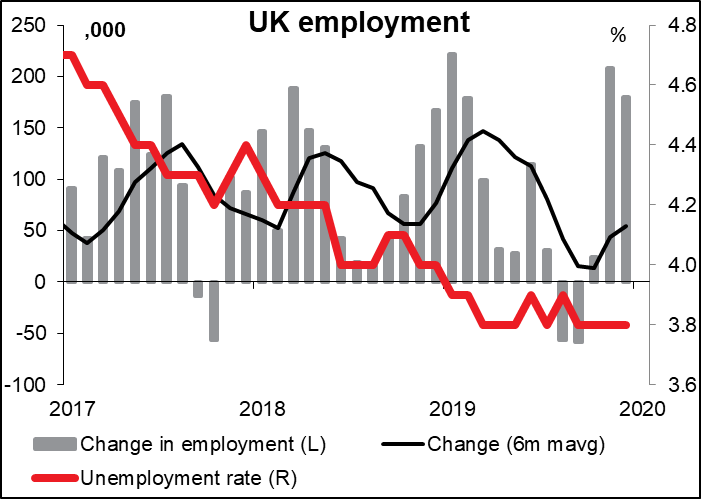 EUR/USD fell through 1.08 as EU indicators contine to disappoint and US indicators continue to beat expectations. The ZEW survey yesterday was much worse than expected. In particular, the expectations index fell 18 points, the first major decline since August. That shows diminishing optimism about the German – and hence the Eurozone – economy.

On the other hand, yesterday’s Empire State manufacturing survey beat expectations soundly – the market was going for a small increase to  5.0 from 4.8, but instead it jumped to 12.9, the highest since last May. 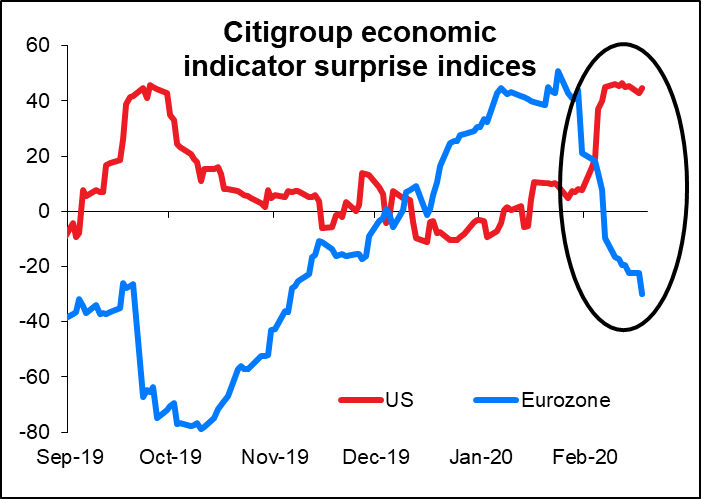 I’ve been talking for some time about the risk of a further downturn in EUR/USD from a fundamental point of view, based largely on the widening difference in expected growth between the two regions. There’s also a technical argument to be made for a lower euro:  the single currency is approaching a major long-term support level. If it breaks through this support, heaven only knows where the next support might be. 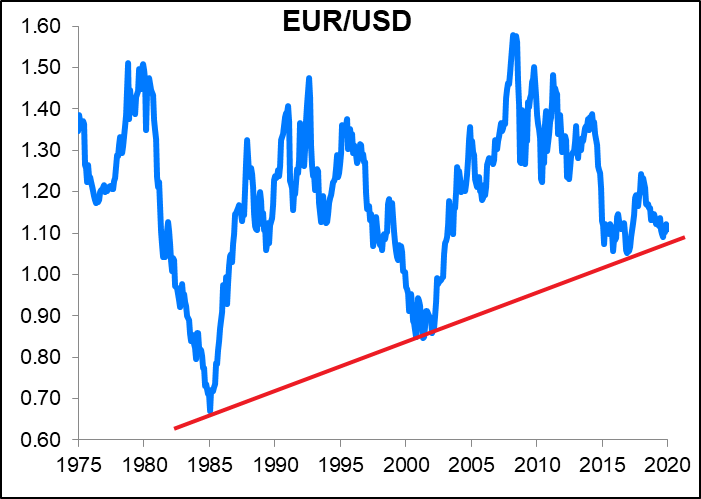 Apparently, a number of market participants think this is a good possibility, because the longer-term risk reversals have recently flipped into negative territory, i.e. 3- and 6-month puts now cost more than calls. This indicates more long-term bearishness about the pair. Note how swiftly the rate has shifted from positive to negative. I remain negative on EUR and especially EUR/USD. 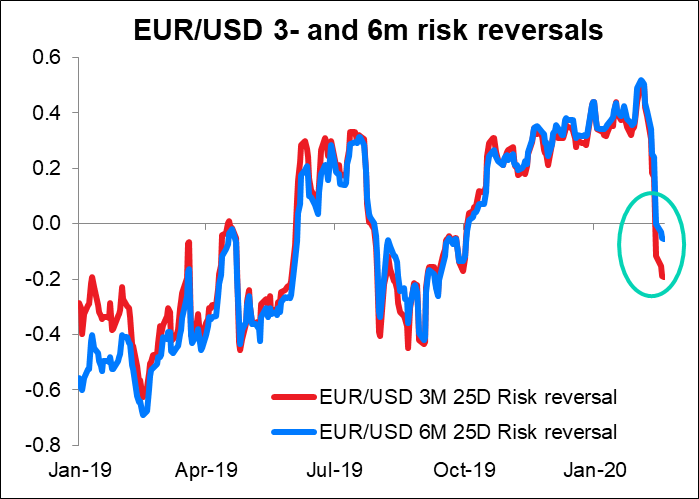 The officials figures as usual show that the spread of the virus is slowing. Good news! But South Korea reported 15 more cases. 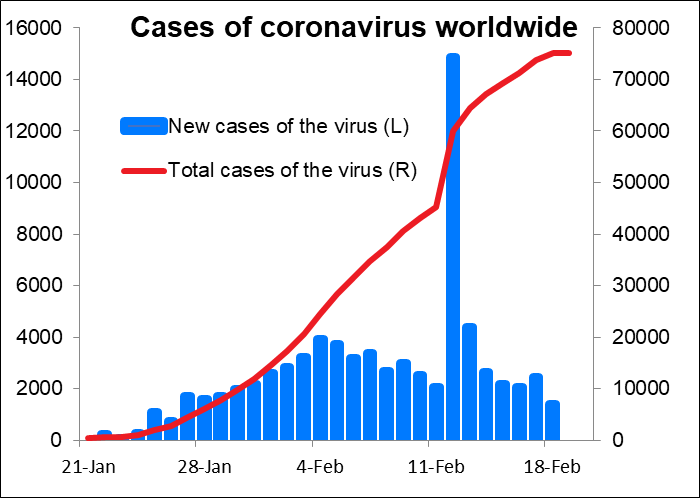 If you’re interested in reading about how projections are being made for the progress of the virus, there’s an interesting article at STAT news, a website for people in the medical and health industry. In an article entitled “Disease modelers gaze into their computers to see the future of Covid-19, and it isn’t good,” they discuss how forecasters make predictions for these kinds of events. The best forecasters, from the US Los Alamos National Laboratory, predict that the virus could result in anywhere from between 550,000 cases to 4.4mn. This compares with the current official figure of 75,198. The discrepency suggests that either a) the models are wrong, because they fail to take into account the strict isolation measures that the Chinese authorities have put in place, or b) the official figures are somewhere between undercounting and outright fraud. Which is it? I don’t know. I report, you decide.

I would also suggest you follow Jennifer Zeng @jenniferatntd on Twitter. She’s a Chinese netizen, now living in Australia, who is posting information and videos about the epidemic from inside China. She also has a blog (https://www.jenniferzengblog.com/) and a YouTube channel (https://www.youtube.com/c/JenniferZeng?sub_confirmation=1 )

The day starts with UK inflation data. Headline inflation is forecast to accelerate modestly due to higher energy and transport prices, but remain below the Bank of England’s 2% target. Core CPI is expected to accelerate only a notch, as are producer prices. On a month-on-month basis, prices are expected to fall. Net net, the data suggest that inflation is remaining pretty stable at a bit below the Bank of England’s 2% target but well within the Monetary Policy Committee (MPC)’s 1%-3% “range of tolerance.” This is consistent with the Bank of England’s comment after its January MPC meeting that “there has been a somewhat greater margin of spare capacity in the economy over recent years, which has been exerting downward pressure on domestically generated inflation.” I don’t think inflation is a major concern for the MPC right now – I think the purchasing managers’ indices and other indicators “of an improved outlook” will be more important in determining the Bank’s view at its next meeting (26 March). GBP neutral 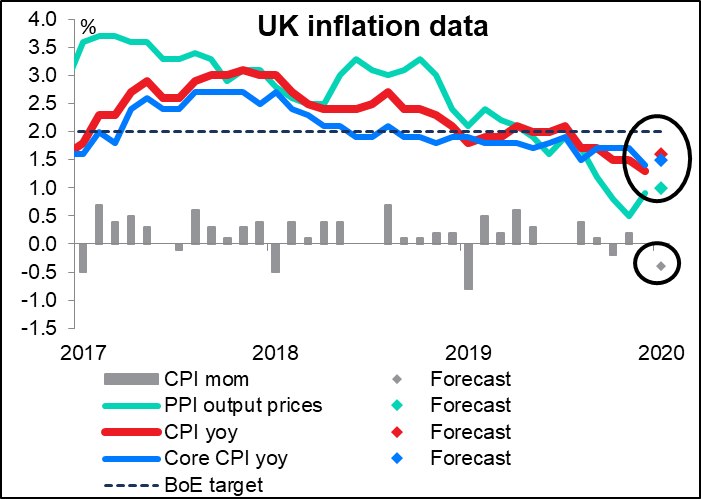 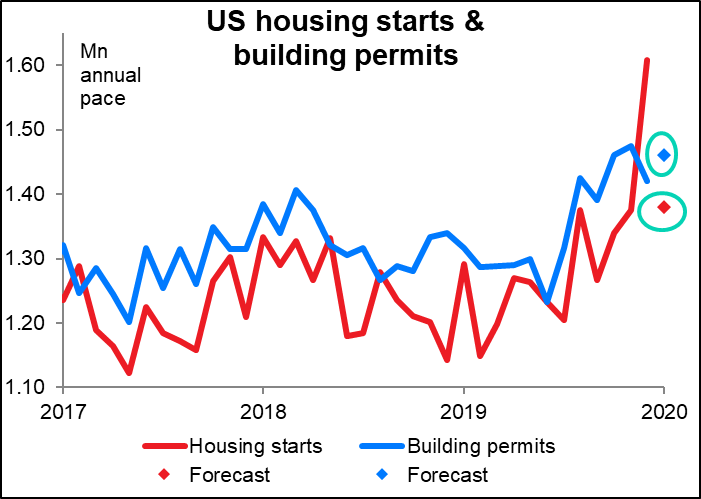 US producer prices (PPI) are forecast to move higher, both at the headline level and core, although they’re both expected to remain below the Fed’s 2% inflation target. Higher inflation at the producer level should be modestly bullish USD. 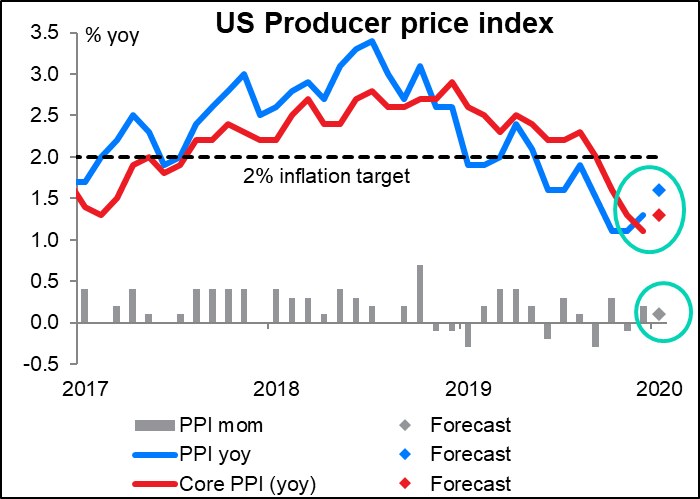 The Canadian consumer prices index (CPI) is forecast to be boring, boring, boring. The headline number is expected to tick up one notch, but the Bank of Canada doesn’t watch that one – it watches its three core measures, all of which are expected to continue to rise at the exact same pace as in the previous month, and all within a whisker of the 2% inflation target. How perfect can you get, eh? Like other central banks, the BoC isn’t worried about inflation at this point, it’s worried about growth (which will affect inflation in the future). CAD neutral 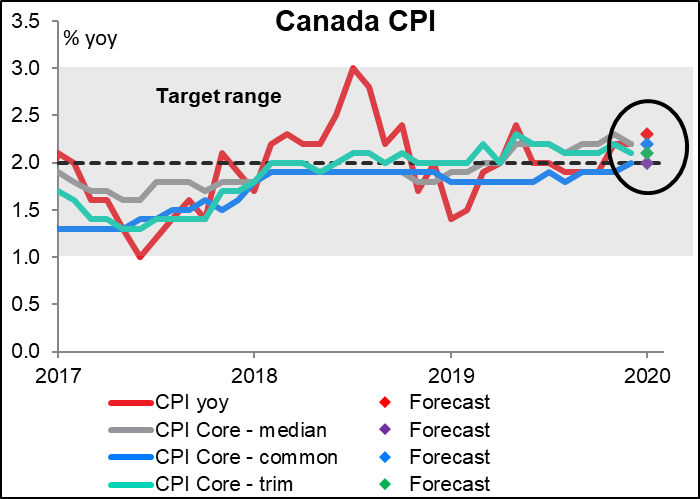 The minutes of the 29 January meeting of the Federal Open Market Committee (FOMC), the Fed’s rate-setting body, aren’t likely to tell us much that we don’t already know after two days of grilling Fed Chair Powell in the House and Senate. There could be further information about two points, though. First is the Fed’s policy review. While the Committee was unanimous in declaring the current stance of policy “appropriate,” Powell noted in his post-meeting press conference that under a different policy framework, such as average inflation targeting, the conclusion could be different. We will be looking for any more detail about these alternative ways of managing monetary policy and which way the Committee is leaning. Secondly, there could be some information about the Fed staff’s insight into the economic impact of the coronavirus.

If the minutes don’t give us much insight into the policy review, don’t worry, Richmond Fed President Barkin (NV) will take part in a panel discussion on that very topic this evening, plus Cleveland Fed President Mester (V), Gov. Brainard (V) and Vice Chair Clarida (V) will all be speaking at a monetary policy forum in New York on Friday, when they will no doubt be discussing this issue.

Overnight we get the Australian employment data. This is the key indicator for Australia nowadays, as the Reserve Bank of Australia (RBA) has singled out the labor market as the only indicator that it is “monitoring carefully.” (“The Board will continue to monitor developments carefully, including in the labour market.”) The economy is expected to have gained only 10k jobs, which is about half the recent trend rate, and the unemployment rate is expected to have ticked up one tic but remain within the recent range. While not really great, these figures are within the normal range. I think they’ll be seen as neutral for RBA policy and therefore neutral for AUD. 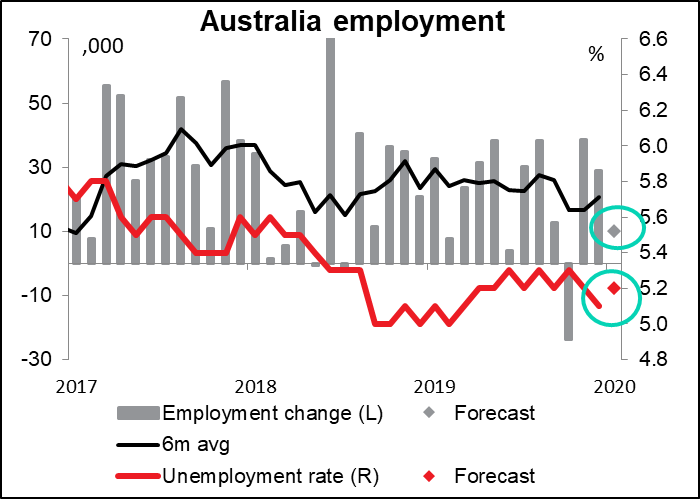 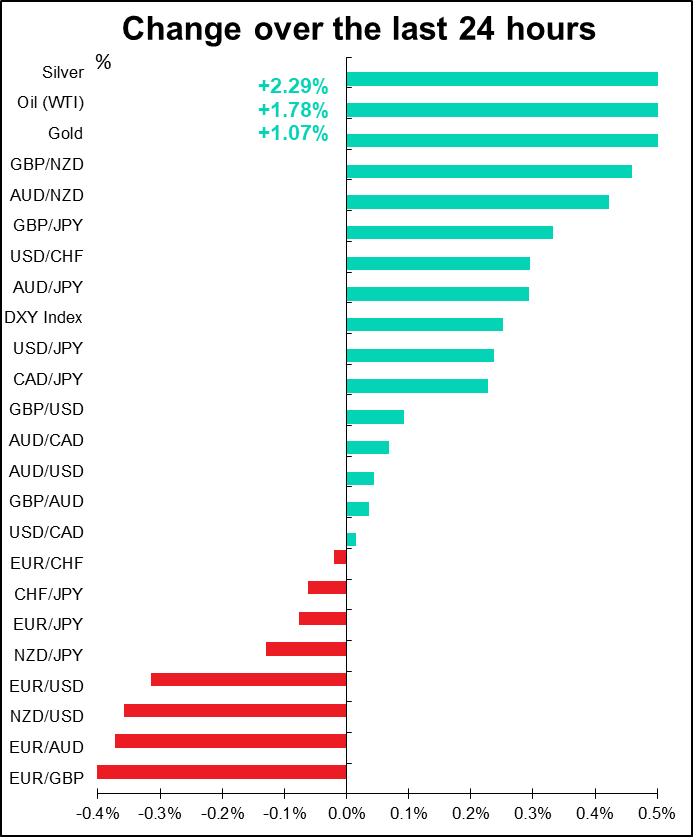