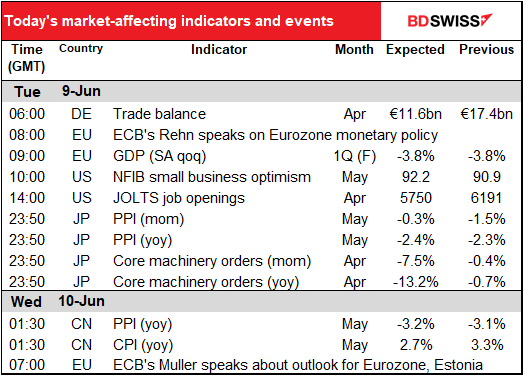 A pair of statistics that sum up the world nowadays:

Yesterday, the “longest” economic expansion in American history was declared officially over – the National Bureau of Economic Research (NBER) Business Cycle Dating Committee determined that that the economic expansion that began when the US economy hit a trough in June 2010 peaked in February 2020, a total of 128 consecutive months of economic expansion. And if the committee follows past practice, we have also finished the “shortest” recession in American history (two months), because as I wrote in my weekly this week, the economy probably reached its trough in April.

Of course the current “expansion” still has the highest unemployment rate since the Great Depression.

Ordinarily, one would be forgiven for expecting the stock market to be down at least slightly when the unemployment rate goes from 3.6% to 13.3%, but I guess I’m just not in tune with the “new normal.”

Besides the stock market, risk sentiment was supported by economic optimism around reopening as New York City officially entered its first phase of reopening yesterday, plus signs of calm in the streets as curfews were lifted in major cities. Also the Fed expanded its Main Street lending program to include more small businesses and eased some conditions, such as lowering the minimum loan size and extending the term.

(Although note that while New York and much of the rest of the US is reopening, the Director-General of the WHO yesterday warned that the pandemic is worsening globally, as indeed it is.) 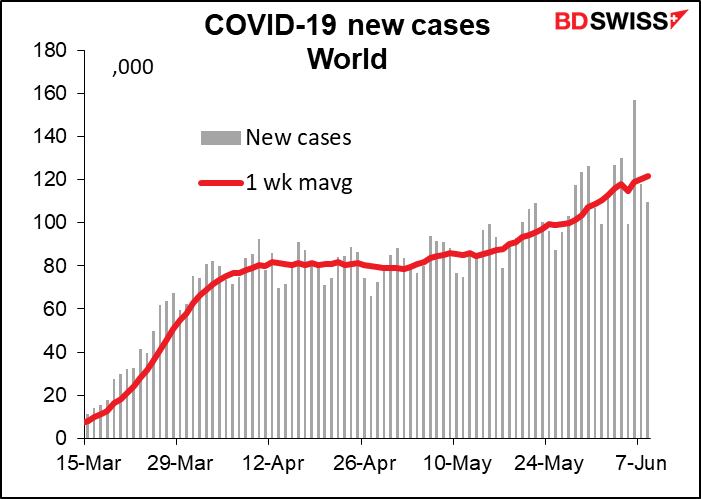 Given the sold performance by stock markets yesterday, the performance of currencies is a bit strange. Why on such a “risk-on” mood (S&P 500 up 1.2%, most Asian markets up this morning, although not Tokyo) is JPY far and away the best performer followed by CHF? My contacts on a trading desk attributed it to investors squaring short JPY positions ahead of the FOMC meeting, but I don’t see so many huge short JPY positions. The Commitments of Traders report shows speculators are net long JPY, while the Citi “FX Pain” positioning index shows currency managers to be only slightly negative on Friday and slightly positive after Monday’s rally. (The Citi FX Positioning Alert Indicators infer positioning of active currency traders from relationships between exchange rates and currency managers’ returns.) 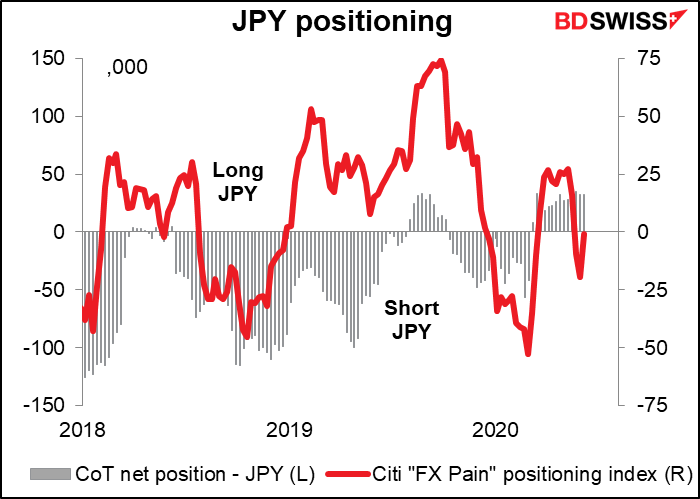 Perhaps traders were cueing exclusively off the TOPIX index (-0.45%) rather than the New York market. Even so, that was an unusually big drop. Moreover, day-to-day moves in USD/JPY actually have a stronger correlation with the New York market than with the Tokyo market, presumably from market participants front-running Japanese investors based on how markets do overnight. In any event, the relationship isn’t that great, meaning there’s plenty of room for outliers. And after the yen’s sharp move last week (from a low of 107.39 on Monday to a high of 109.85 Friday), some profit-taking was entirely understandable. 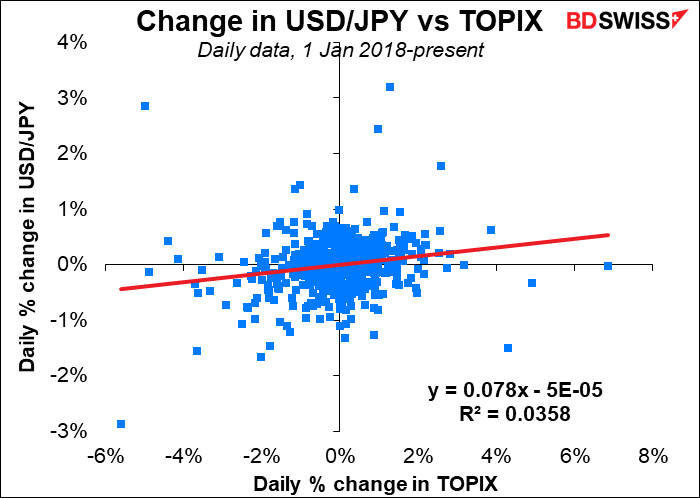 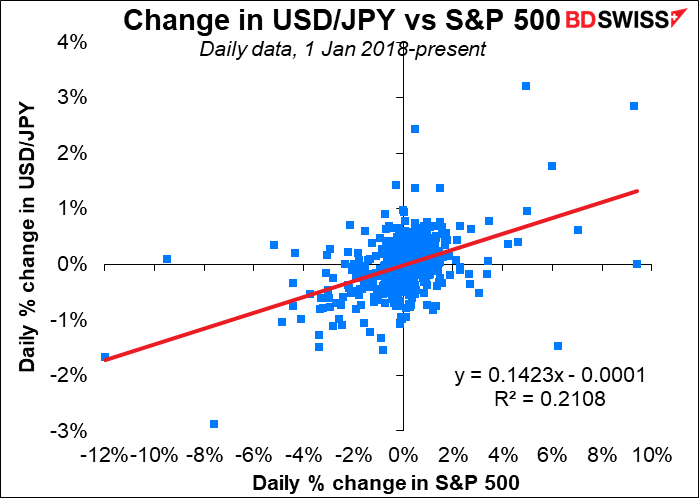 It blew through the 200-day moving average at 108.43. Looking at a one-year chart, it bounced almost exactly off the 76.4% Fibonacci level (109.62) and moved down to the 61.8% level (108.01), where it’s trading more or less this morning. I expect that given the good risk background, this level is likely to hold and we could see USD/JPY moving up this morning.

Oil was lower as the exuberance surrounding the weekend’s OPEC+ deal faded and the reality that it was only extended for one month sank in. But CAD was firmer anyway.

I talked about Germany’s trade balance yesterday. It’s interesting but probably not market-affecting so I won’t repeat it today.

Eurozone GDP is rarely revised, and if it is, only by ±10 bps, so that’s not market-affecting either.

Then we come to the National Federation of Independent Businesses (NFIB), the small-business association. This indicator, like the consumer confidence indices, didn’t get down to the levels of the Global Financial Crisis despite the extraordinary conditions the world found itself in. This is no doubt a testament to the quick & massive emergency aid that was put in place by both the Fed and the government. 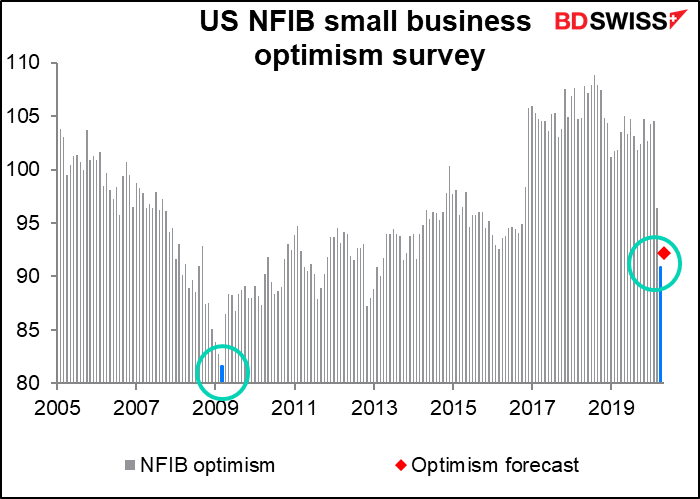 The “hiring plans” index, which comes out before the overall index, turned up slightly in May. A good sign. 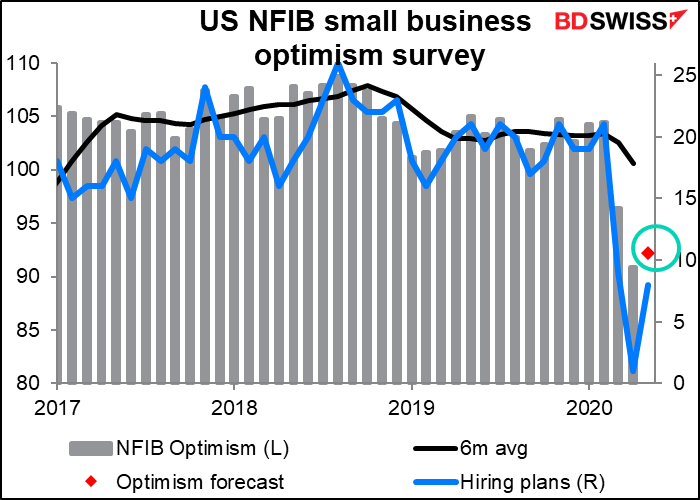 The Job Openings and Labor Turnover Survey (JOLTS) job openings for April is (are?) expected to fall. How much it falls – or whether it falls at all —  will be an important indicator of exactly how accurate the drop in the US unemployment rate for May was.

In any case, the forecast rate is just back to the level of a few years ago, which I think is amazing – given all the uncertainty, I wouldn’t have been surprised if there were zero job openings in April. 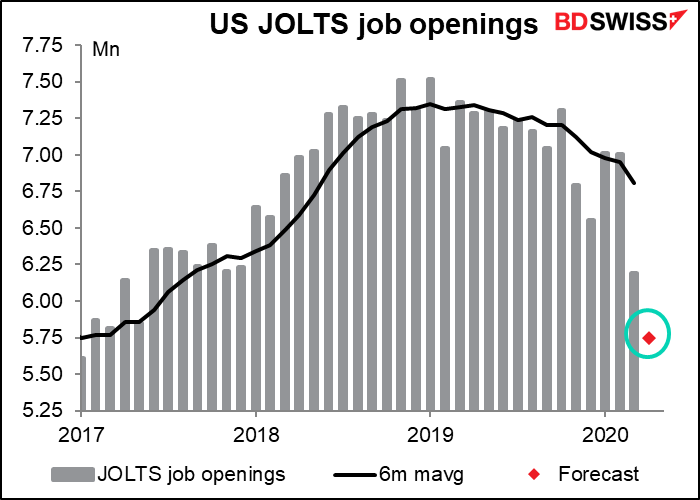 Then that’s it until Japan comes in. Japan producer price index (PPI) is expected to show deflation at the factory gate level. One of the big debates concerning the economic impact of the virus is whether it’s going to be deflationary or inflationary. So far, all the signs are deflationary – any inflation will only come later, as the velocity of money picks up. 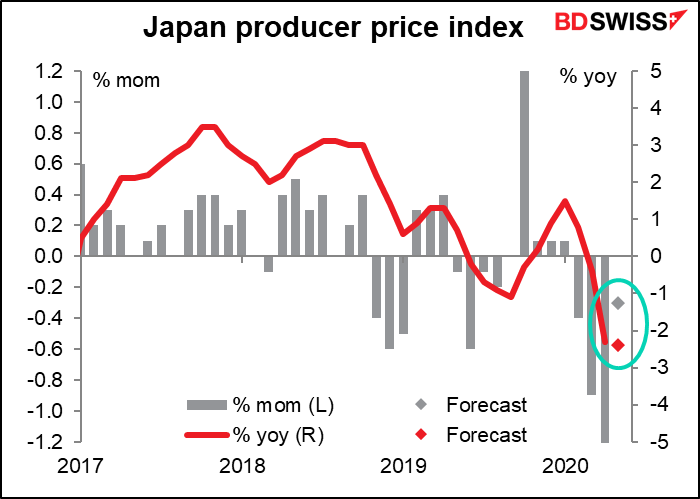 Japan’s machinery orders were largely trendless up to March, but are expected to suffer a big drop in April. Pretty much the same pattern for everything in the world. 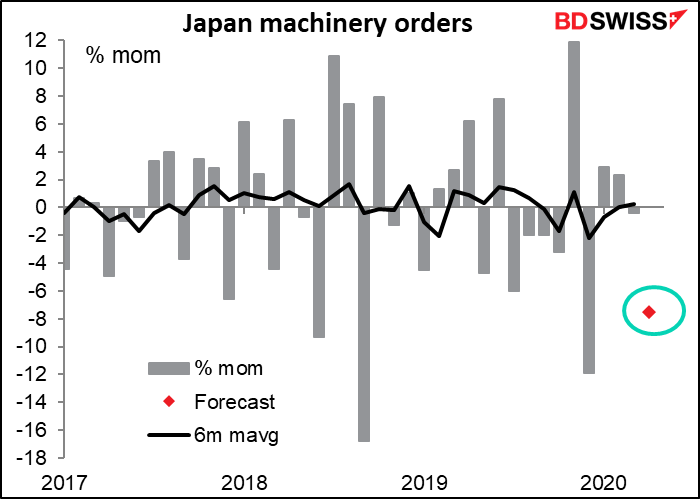 Speaking of deflation, China’s PPI is expected to fall further into deflation, while the country’s inflation at the consumer price (CPI) level slows somewhat. China’s PPI has global importance, because that’s the price that China charges for its exports (the CPI on the other hand is mostly a reflection of China’s food prices and has no global implications). A falling PPI means the price of imports from China will be falling everywhere – increased downward pressure on domestic prices as well. 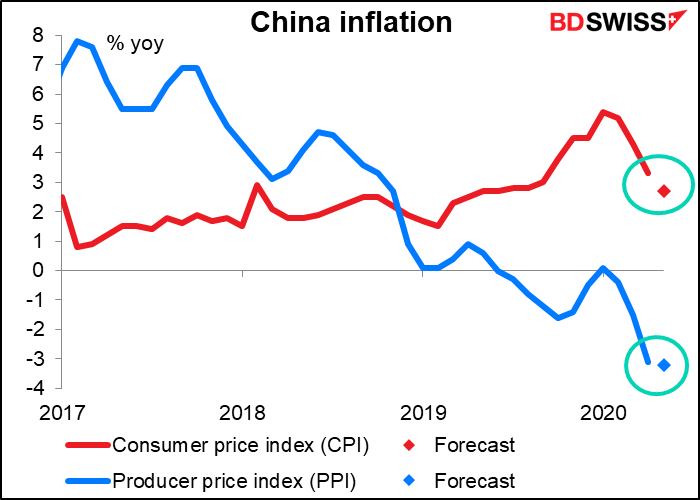 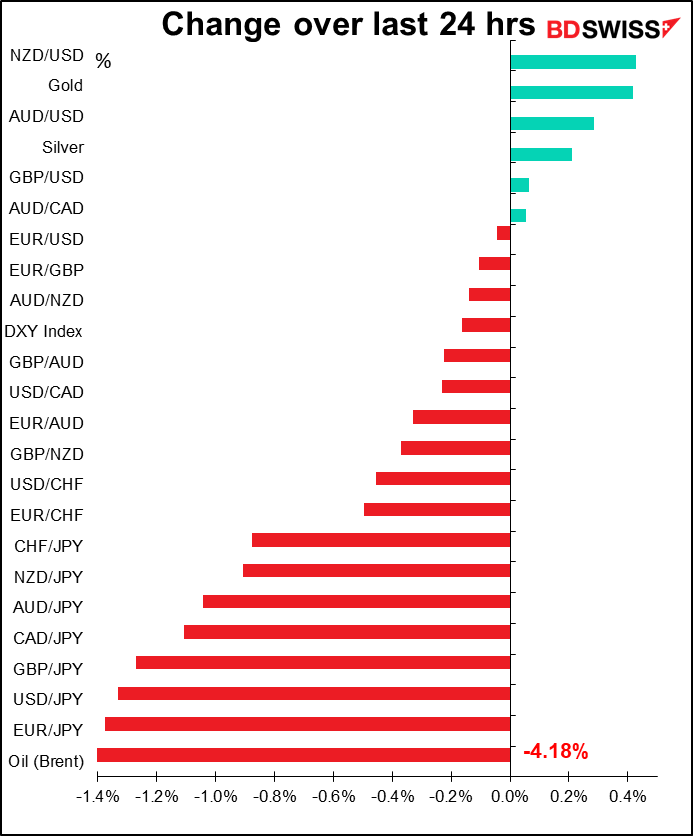