You are at:Home»MARKET PREVIEW»JPY & CHF Up, Commodity Currencies Down in “Risk Off” Move; Ifo, Chicago Fed 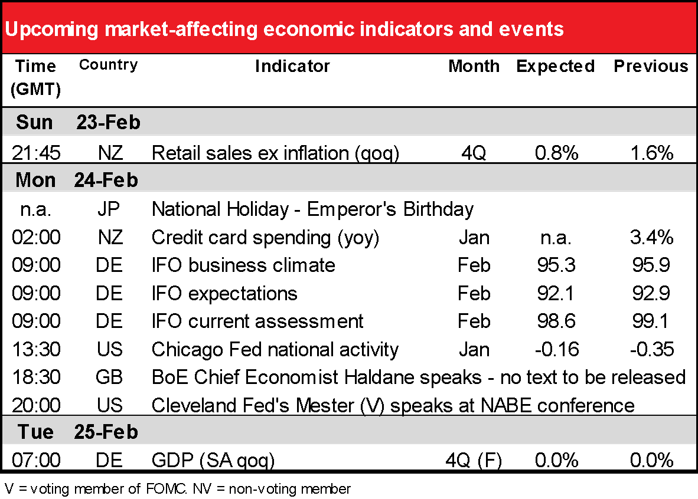 It’s a quintessential “risk off” day today, with gold up an astonishing 2.1% from Friday and oil down 2.6%. With Italy cancelling the last two days of the Venice carnival and South Korea declaring an emergency after virus cases increase 20x in five days, people are beginning to realize that this COVID-19 virus is pretty serious. Almost every stock market index in Asia is in the red, except amazingly Shenzhen, which is up an astonishing 1.6%. Pretty amazing, considering that South Korea’s KOSPI index is down 3.9%. But with Wuhan easing some restrictions, it looks like the virus may be dying down in China just as it’s beginning to spread in the rest of the world.

Friday’s Eurozone purchasing managers’ indices (PMIs) were surprisingly good. While I had thought that the only question would be “how far would they fall,” in fact they were substantially higher – EU-wide manufacturing rose to 49.1 from 47.9 (fall to 47.4 expected) while EU services rose to 51.6 from 51.3 (fall to 51.0 expected. 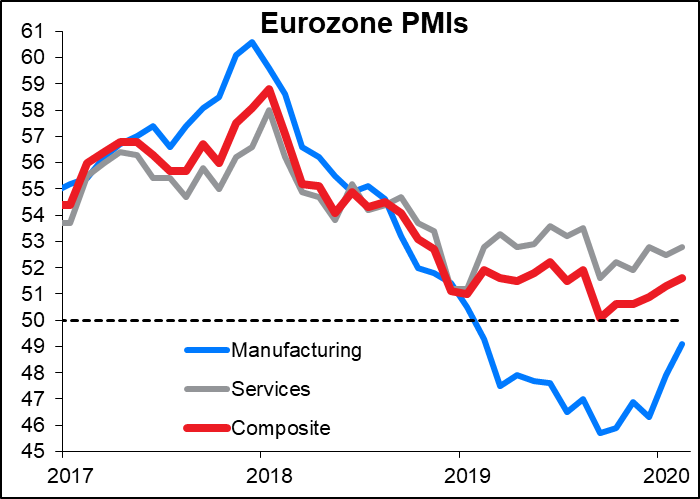 Markit said the figures were “consistent with GDP growing at a quarterly rate approaching 0.2%,” which would be a bit higher than the +0.1% recorded in Q4 2019, assuming that Eurostat rounds up. In fact the current market forecast for Q1 2020 growth is indeed +0.2%.

Some of the gain in the manufacturing index was an optical illusion, however. One of the sub-indices that pushed it up was “a marked lengthening of supplier delivery times.” Usually this is a sign that business is good, so “longer” feeds into the headline formula as a plus. Unfortunately the delays now are not because business is booming, but rather because the suppliers’ factories are shut down. I think we could still see these figures worsen dramatically next month. If we look at Standard Chartered Bank’s PMI for small- and medium-enterprises in China, the overall figure fell to 40.50 in February, while the production PMI plummeted to an astonishing 9.50 and new orders to 18.40. Actually, this suggests that next month might be a lot better – any small improvement in the environment could result in a big turnaround in the figures. 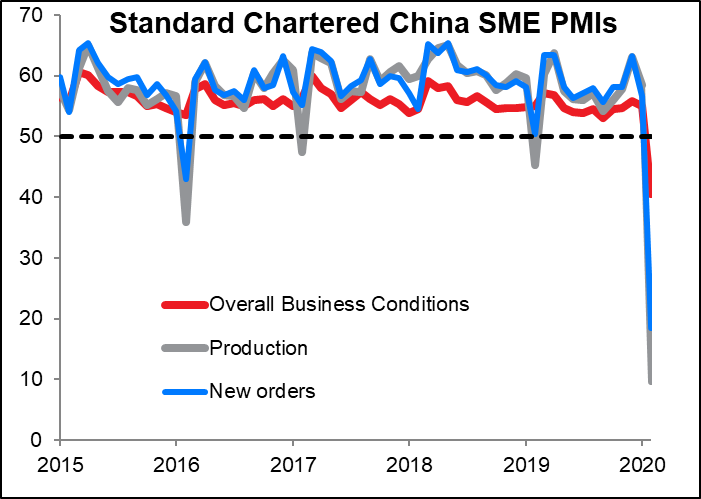 EUR/USD regained the 1.08 level on the news, but just barely – the EUR rally only lasted about two hours. It was noticeable that the good news about Europe barely made a dent in EUR/USD – which shows either a lot of skepticism about the numbers, or skepticism about the Eurozone and the euro in general.

The US figures on the other hand were a disaster, kind of. The manufacturing PMI was much worse than expected (50.8 vs 51.5 expected, 51.9 previously) and the services PMI, which was expected to be unchanged, plunged to 49.4 from 53.4 – below the 50 “boom or bust” line. That was partially a COVID-19 result as services include travel and tourism (we saw something similar in Japan, which gets a lot more tourists from China than the US does — the February services PMI there plunged to 46.7 from 51.0.)

The poor US figures had a much bigger effect on EUR/USD than the good European figures did. 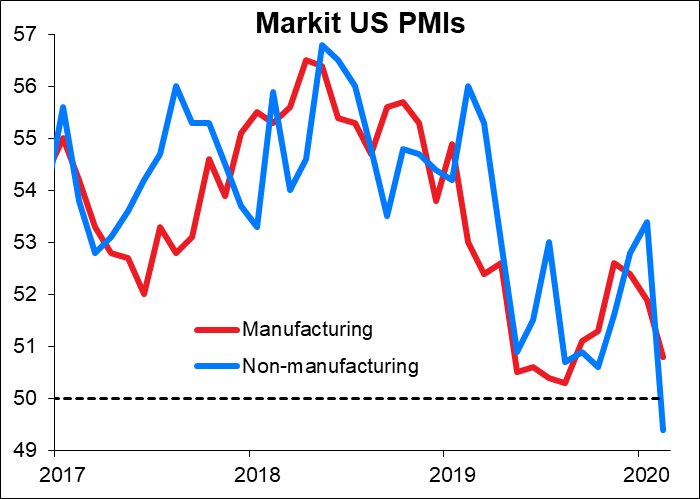 EUR/USD, while higher now, has lost most of the gain that resulted from the disappointing US PMI. That suggests to me that USD retains its benefit as the ultimate “safe haven” currency. I would expect the US currency to continue to gain further today.

Does the rally in JPY disprove my theory from Friday, that worry about the Japanese economy is stronger than “risk off” buying of JPY? Not necessarily. I think the focus today is on South Korea and Italy. When Japan has to cancel the 2020 Olympics, the focus will return to Japan and JPY. I don’t believe for a second that they’re out of the woods yet.

Usually silver moves more than gold, but today gold (+2.1%) was up much more sharply than silver (+0.9%). Such moves are typical on days when risk aversion rises because of an even that poses a threat to industrial production.

Friday’s stronger-than-expected manufacturing PMI (51.9, up from 50.0; fall to 49.7 expected) pushed sterling higher, but it was coming off this morning as risk aversion caused a general “flight to safety” into USD.

Note:  In Friday’s Weekly Outlook, I said that the EU-wide CPI would be released on Friday, the same day as the German CPI. This was a mistake in the despicable Bloomberg calendar function, which is the bane of my sad and trivial existence. In fact the EU-wide CPI is will be released a few days later (Tuesday, 3 March) as usual, dummy. They also put the “ECB and its Watchers” conference on today’s schedule too – that’s scheduled for 24 March, not 24 February.

A continuation of the previous week’s trend:  speculators are getting shorter EUR and longer USD. But EUR & USD positions are by no means extreme. Specs can keep going further. 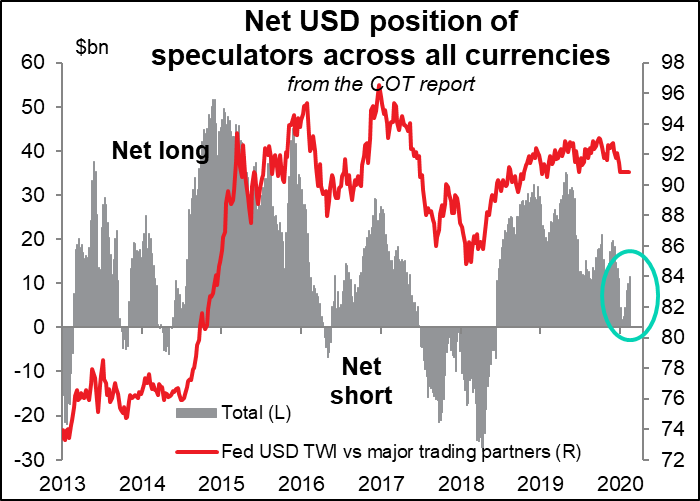 They added to already long GBP positions. The figure looks extreme relative to the last five years, but that’s just because the market has been largely negative on GBP for the last five years. Going back further, before the Global Financial Crisis, it’s clear that larger long GBP positions are no problem for the market. Still, given the large number of “known unknowns” facing Britain, it’s unclear to me how much more speculators will be willing to add to their positions. 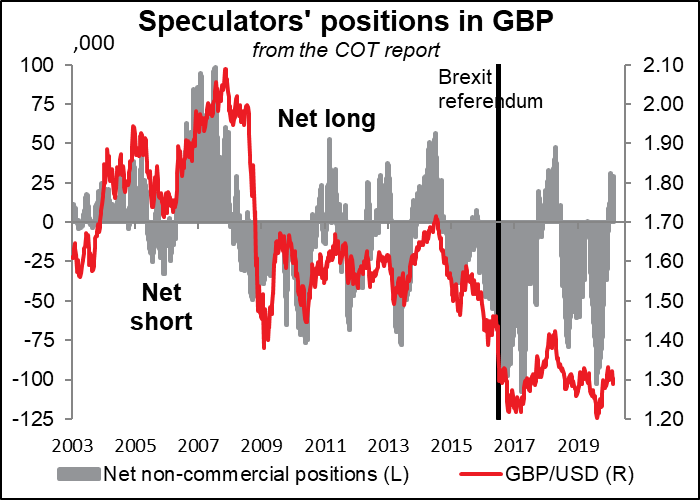 They also added to both gold and silver longs. Gold longs hit a record high. Which brings us to an interesting question:  can specs continue to buy, and if not, can gold continue to rally?

I think the answer to both questions is yes. As for the second question, gold has managed to rise in the past even as speculative longs declined. It rose from $995/oz to $1,875 between Sep. 2009 and Sep. 2011 even though speculative longs were declining during most of that period (see graph above). 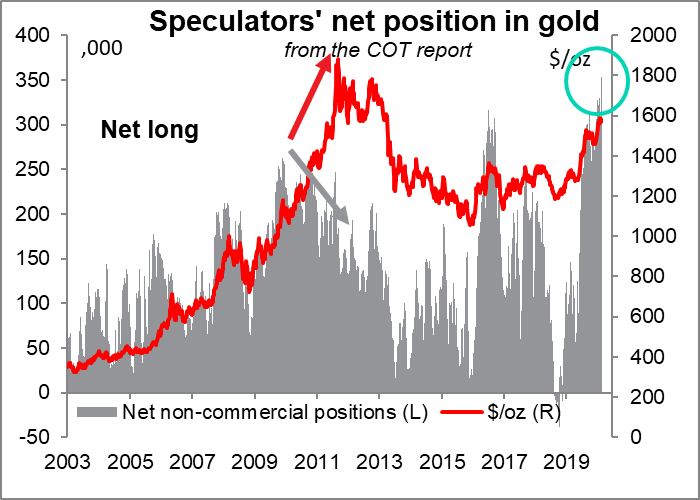 But in any case, it’s still possible – indeed likely, I would argue – that speculators will continue to add to their long positions. That’s because there’s a phenomenon that was never been seen before the Global Financial Crisis, namely negative yielding bonds. Gold is no doubt rising in anticipation of further declines in interest rates as central banks apply what monetary medicine they can to economies hit by the COVID-19 virus. The fact that the US long bond started trading with a 1-handle again last week shows how this assumption is permeating markets. It’s likely to boost gold further, in my view. 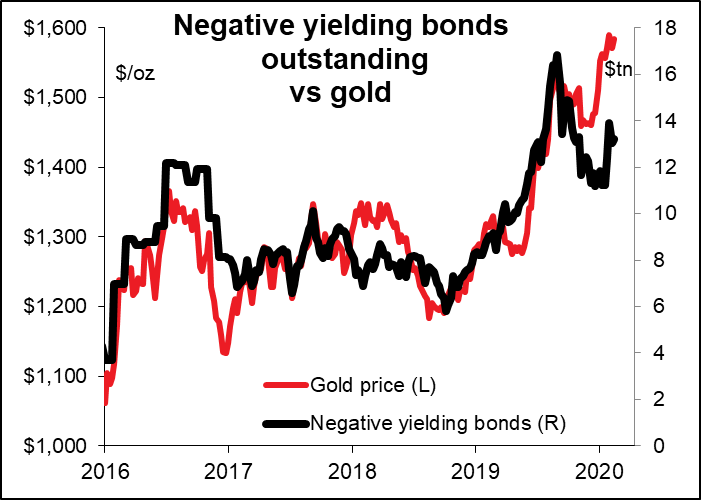 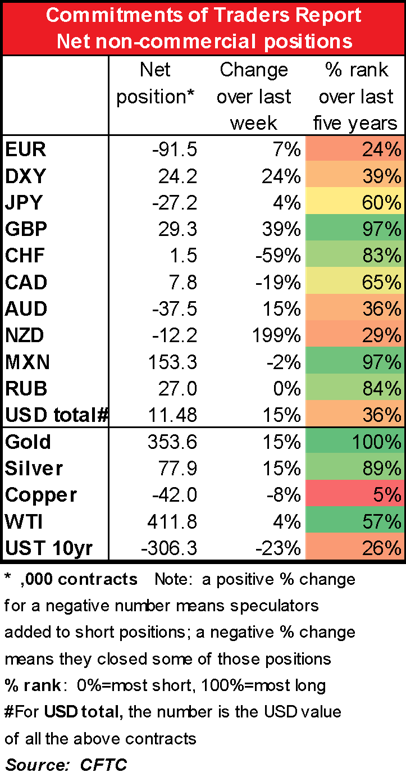 The day starts with the Ifo business climate. It will be interesting to see if it shows the same kind of improvement that Friday’s manufacturing purchasing managers’ index (PMI) did. 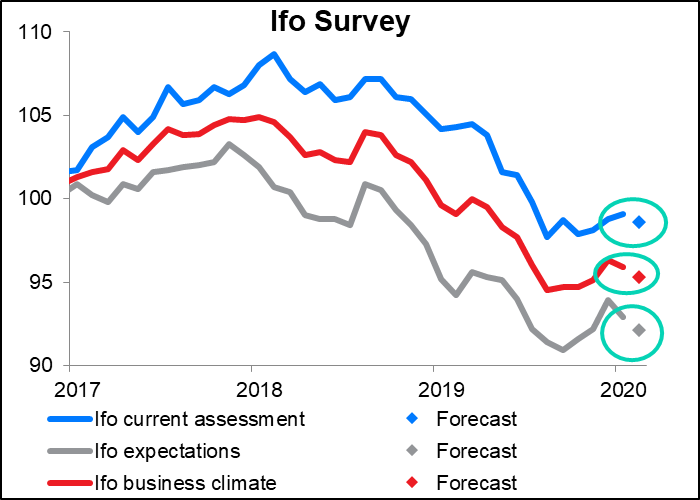 In fact, if we look at the PMIs, it appears that the Ifo survey “should” be even higher than it is. Pessimist that I am, I tend to believe the Ifo more. EUR didn’t manage to gain on Friday despite the better-than-expected PMI – that suggests we could see a decline on a fall in the Ifo. EUR negative 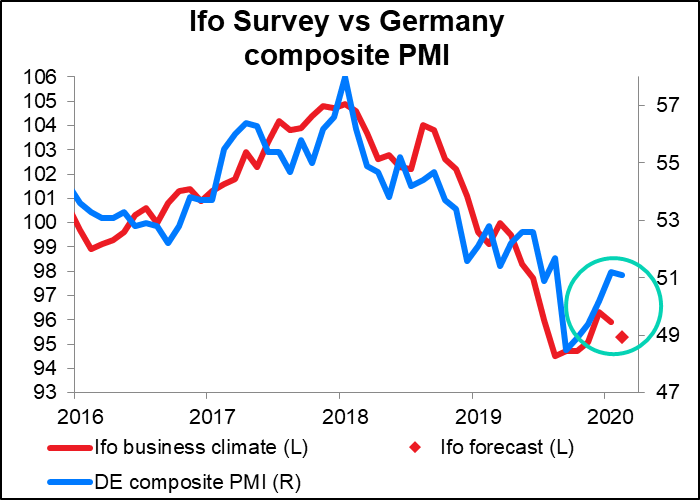 When the US starts up, we get the Chicago Fed National Activity Index (CFNAI). It’s different from the other regional Fed indices. It’s designed to gauge overall economic activity and related inflationary pressure on a national basis, not regional. A positive index reading corresponds to growth above trend and a negative index reading corresponds to growth below trend. Although the 85 components have all been previously announced, the indicator is one of the more closely watched among those issued by the various regional Feds. However it’s difficult to interpret any one number, because the figures are so volatile. In any event, it’s expected to remain in negative (i.e., below-trend growth) territory, but to be a bit less negative, i.e. improve. That could prove positive for the dollar in today’s environment, where the market is looking for excuses to buy dollars. 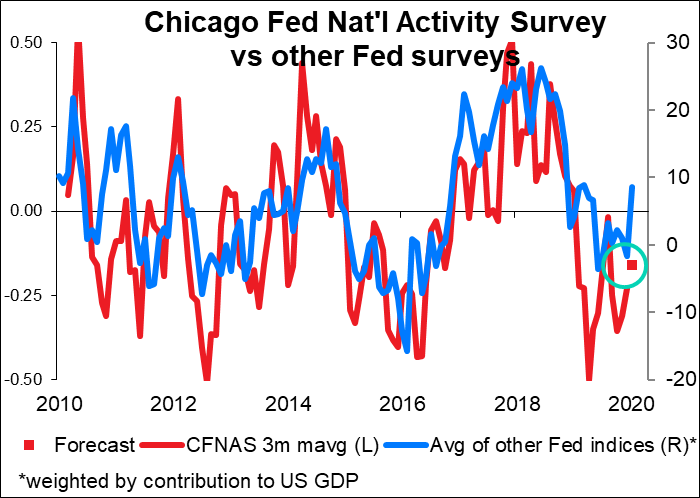 Late in the US day, Cleveland Fed President Mester (V) will discuss the economy and monetary policy at the annual NABE economic policy conference. What does NABE stand for (besides being the Japanese word for “pot”)? When I did a search for it, I was surprised to find that it’s the National Association for Bilingual Education, which is holding its annual conference this week in Las Vegas. What’s she doing talking there? Seems odd. Oh no, she’s talking at the National Association for Business Economics conference in Washington. Fed Vice Chair Clarida (V) will be speaking there tomorrow. 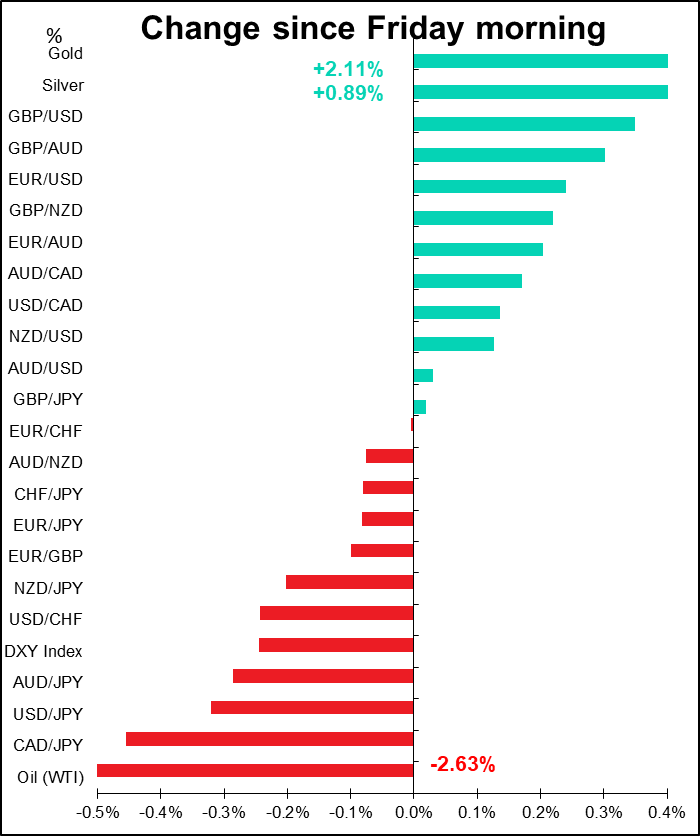