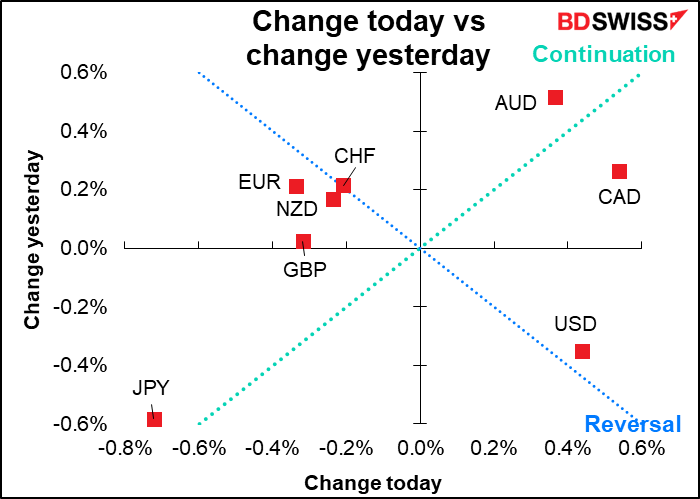 The incredible point in the market is the collapse in bond markets. US 5-year yields were up an astonishing 23 bps on the day while 10-year yields jumped 16 bps.

For the short end of the market (2yr & 5yr Treasuries), last week was the worst week in the market since 2009. 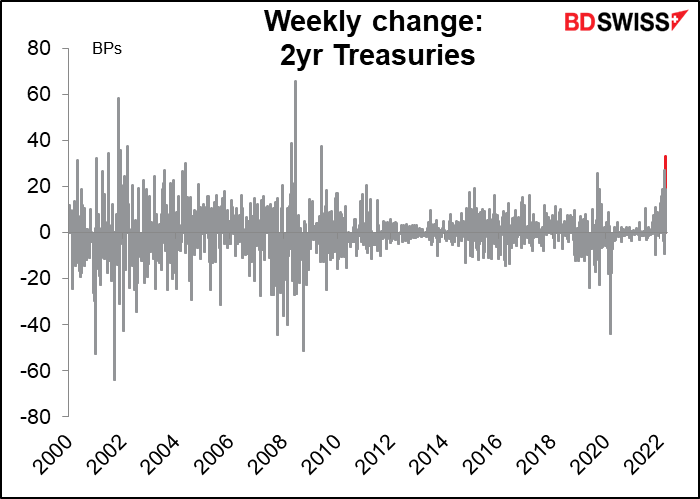 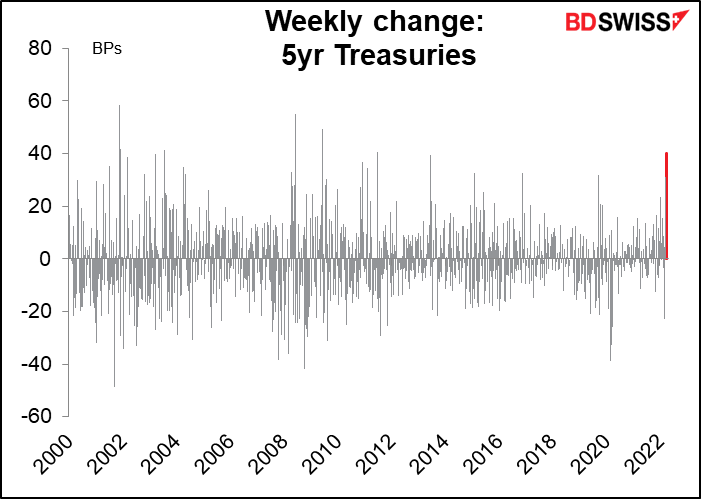 It’s not because of higher inflation expectations. Breakeven inflation rates were barely changed.

Rather, it’s probably because of rising expectations of central bank tightening. The market is now discounting 9 rate hikes from the Fed this year. Given that there are only six more meetings, that means the market is assuming two hikes of 50 bps at two meetings – and a slightly higher chance for 10 rate hikes (i.e. three hikes of 50 bps) than eight. This is a big switch from just a week ago. 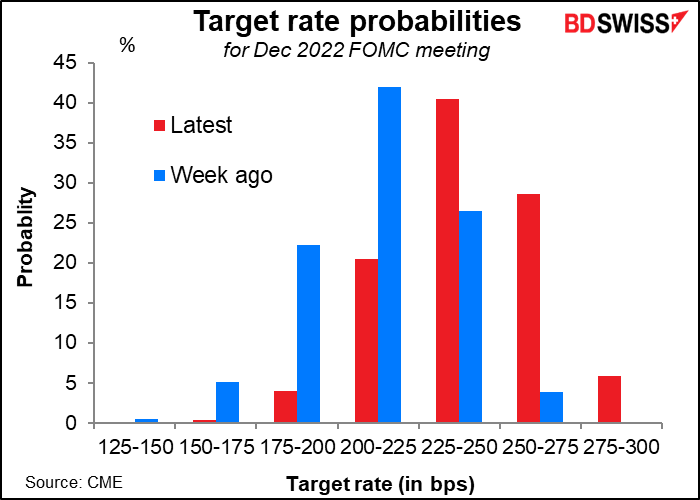 Even so, what the market is pricing in is nothing extraordinary when compared to the hiking cycles of 1994 or 2004. It’s just that over the last decade we’ve gotten used to an extraordinarily low inflation environment when it wasn’t necessary for central banks to tighten very much. 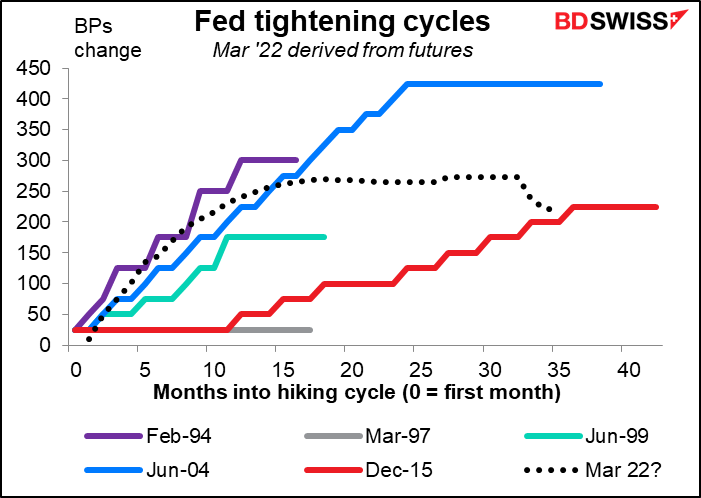 Even so, people may be underestimating just how much the Fed will have to tighten in order to get inflation under control. The real fed funds rate (using the core personal consumption expenditure (PCE) deflator, the Fed’s preferred inflation gauge) is -4.9% vs the average of 2.4% for the decades before the 2008 Global Financial Crisis. To get this back to the pre-crisis average the Fed would have to tighten by 730 bps! 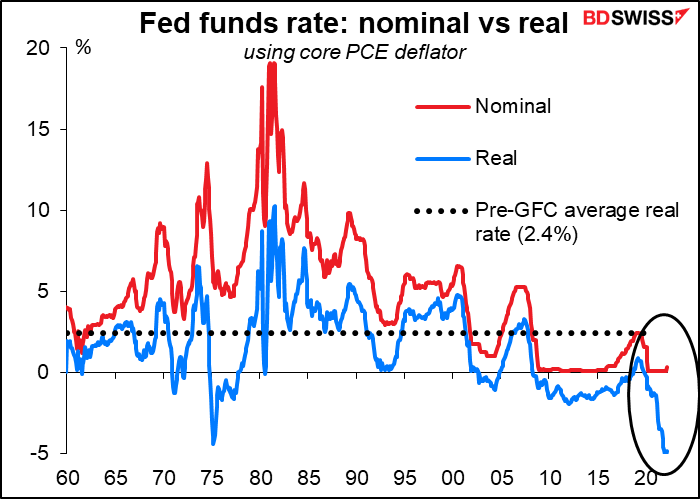 Naturally, with Japanese rates held in place by the Bank of Japan’s Yield Curve Control (YCC) program, in which the Bank pledges to keep the 10-year yield within a ±25 bps range of 0.0%, Japanese investors can get a larger and larger pickup over domestic bonds by buying overseas bonds. This outflow of funds is bound to weaken the yen. (Not to mention foreign investors borrowing yen and using it as a funding currency to buy other assets.) 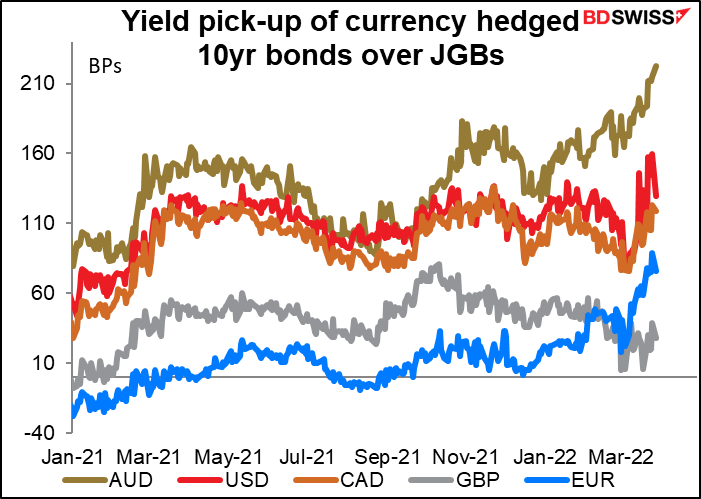 The BoJ had to run two auctions for 10-year Japanese Government Bonds (JGBs) today. In the morning they offered to buy an unlimited amount of 10-year JGBs at the YCC upper limit of 0.25%, but they got no offers at that price. So they tried again in the afternoon. This follows BoJ Gov. Kuroda’s comments following the last Policy Board meeting on March 18th, when he pointed to the discrepancy between the high inflation rates in the US and Europe and Japan’s still-low inflation rate and said “there’s absolutely no need for Japan to raise rates just because others are doing it” 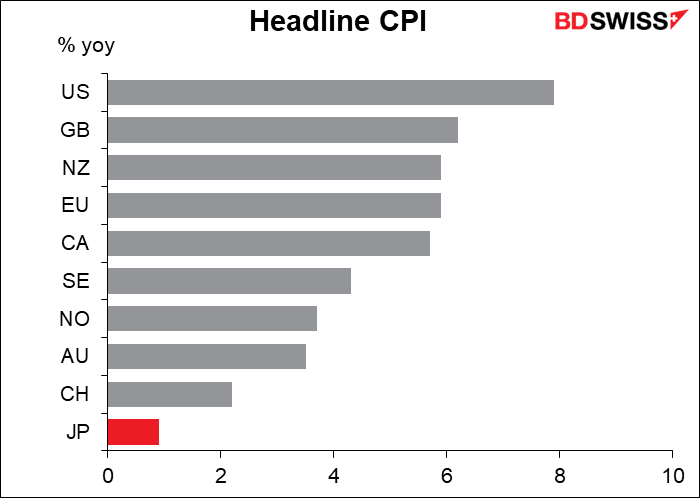 Some people expected the BoJ to intervene on Friday, when 10-year JGB yields hit 0.23%, because that’s the level at which they intervened earlier this year. When they didn’t, these folks took that as a sign that the BoJ wanted to see the yen weaken. However, what they were doing was letting bond yields rise as far as they could before intervening, perhaps as a signal that they don’t want the yen to weaken. Unfortunately in today’s market, one or two basis points isn’t much of a signal.

Specs generally got more bullish USD over the last week. The biggest changes in USD terms were flipping from long CAD to short CAD, followed by increasing short JPY holdings. In fact they increased their short positions in every currency that they were already short and cut their long NZD a bit.  On the other hand, specs increased their long EUR positions slightly. 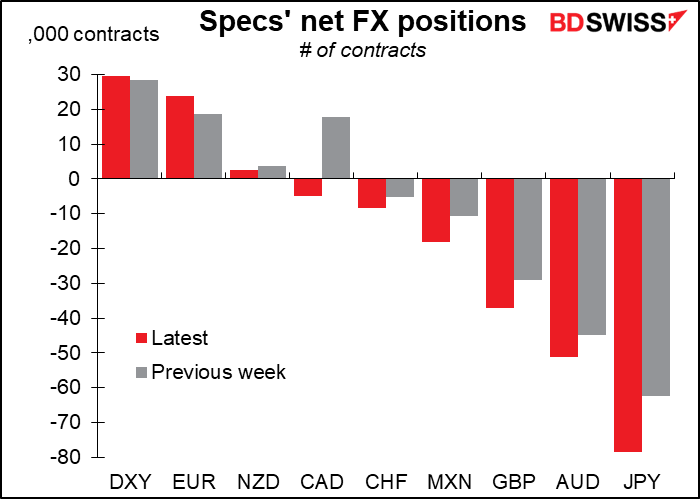 Hedge funds were mixed – they greatly increased their short JPY positions and added to short AUD, but cut their short EUR. They cut their long MXN and long NZD but added to long GBP. 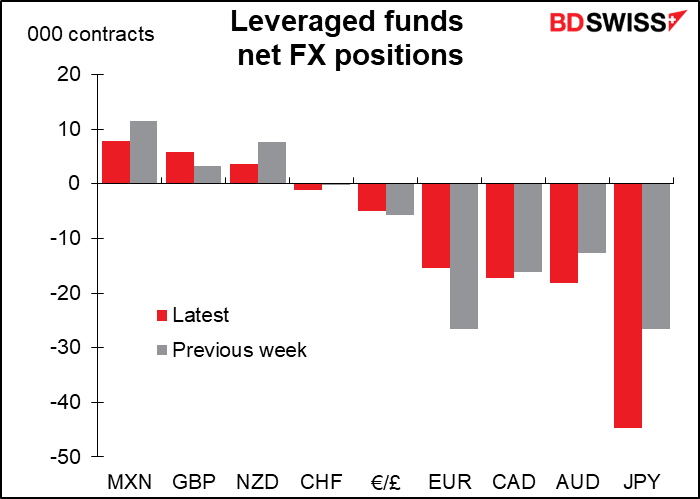 Elsewhere, retail accounts were less bullish USD – they flipped from short CAD & AUD to long both of the currencies. On the other hand they increased their GBP shorts and trimmed their EUR longs a bit. 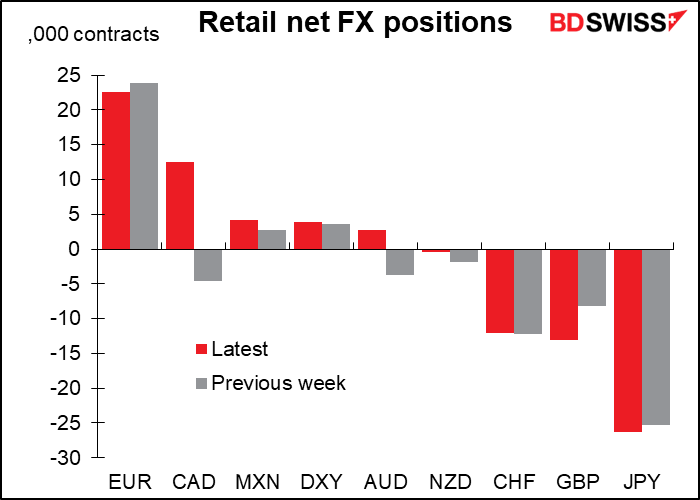 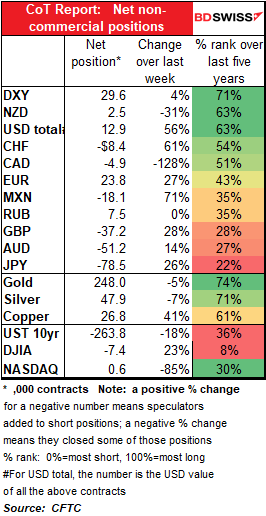 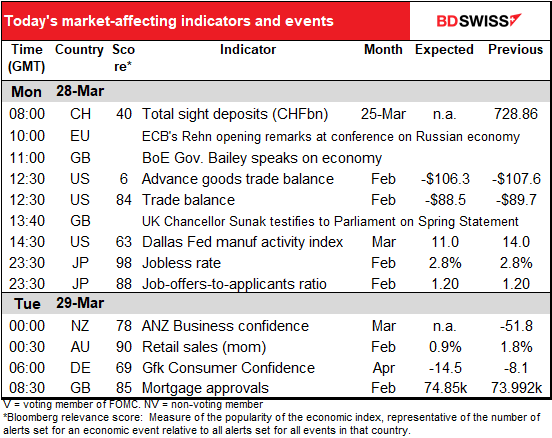 Last week’s increase in Swiss sight deposits was a bit higher than earlier in the year, but still not showing any signs of large-scale intervention except that one week when EUR/CHF fell below parity. Last week’s Swiss National Bank meeting simply repeated the usual boilerplate that the Bank is “willing to intervene in the foreign exchange market as necessary, in order to counter upward pressure on the Swiss franc” and that the CHF “remains highly valued.” So no change in sight as far as I can see. 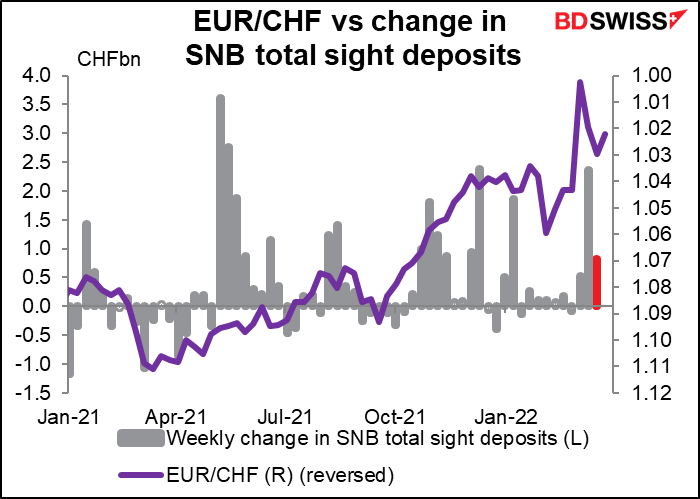 The US advance trade balance, which is the merchandise trade balance (excluding services), is expected to narrow slightly after last month’s record-wide deficit. Still, the US trade deficit is blowing out… 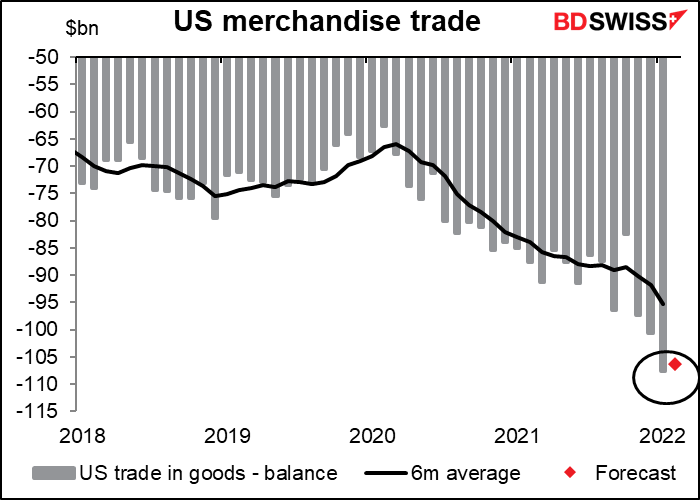 …as imports – which were already higher than expected – grow faster than exports, which have plateaued over the last month or two. This is a result of the US’ fiscal stimulus during the pandemic, which caused the US economy to recover before other economies did and thereby boosted the US consumer more than consumers elsewhere. 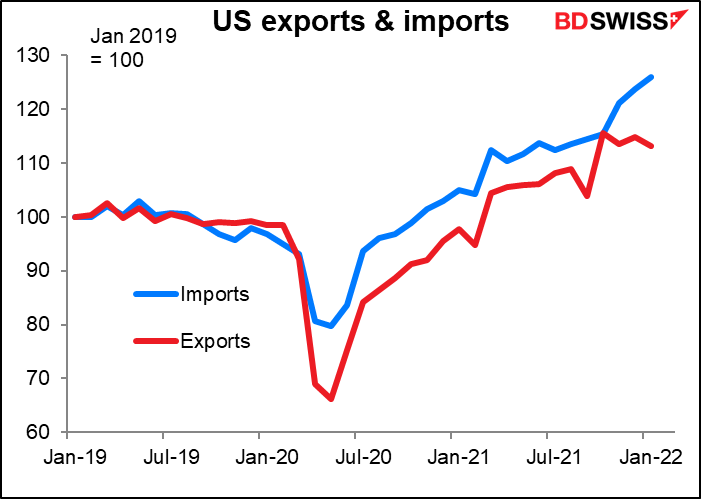 Then that’s about it for indicators until the Asian day begins and the Japan unemployment rate and job-offers-to-applicants ratio are released. They’re both expected to be unchanged. 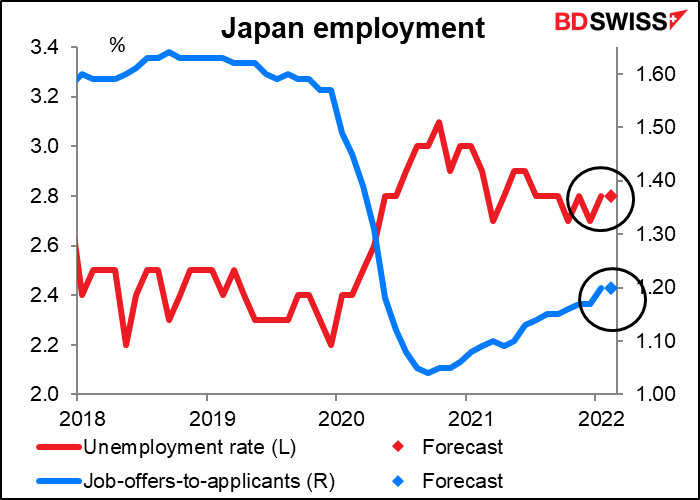 Although these both have high Bloomberg relevance scores, meaning a lot of people watch the results, they don’t seem to have much impact on the FX market until about an hour later, and even that is relatively weak. 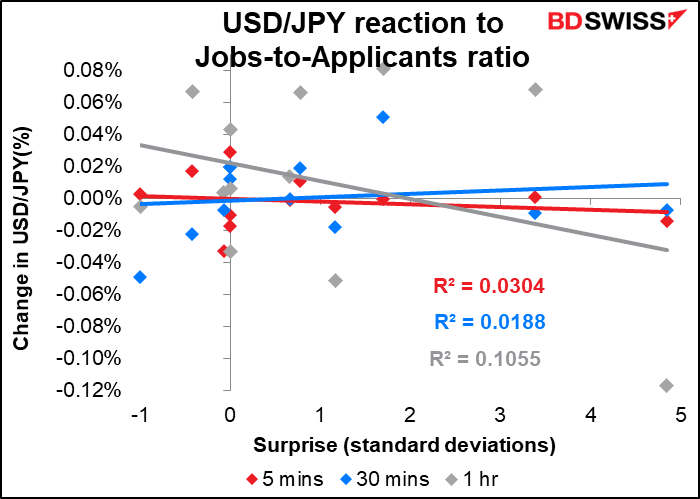 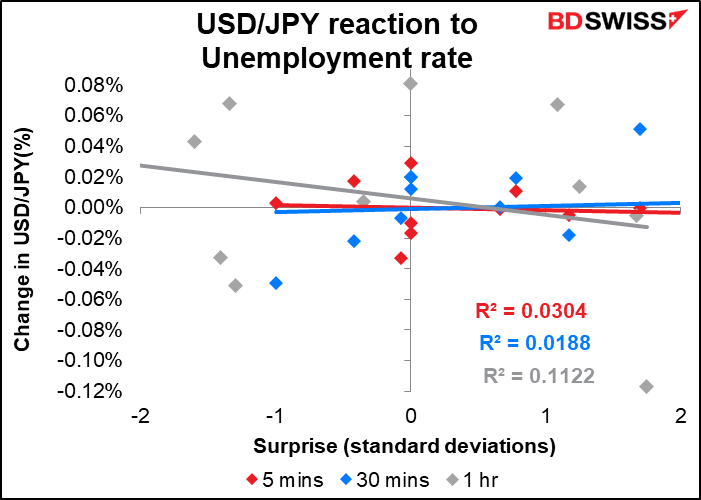 Australian retail sales are expected to be up slightly as the omicron wave from January faded away. However with inflation running at +1.3% qoq or 0.43% mom, a 0.8% mom rise in the value of sales isn’t that much. 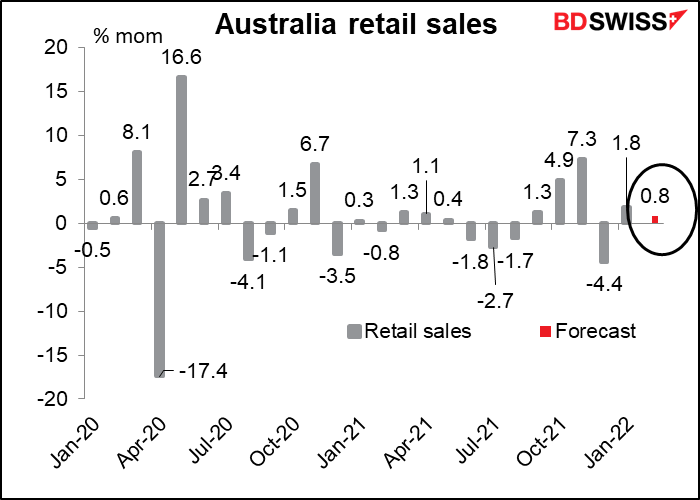 In any cases although the figure has a high Bloomberg relevance score the reaction in the FX market doesn’t seem to be that reliable. 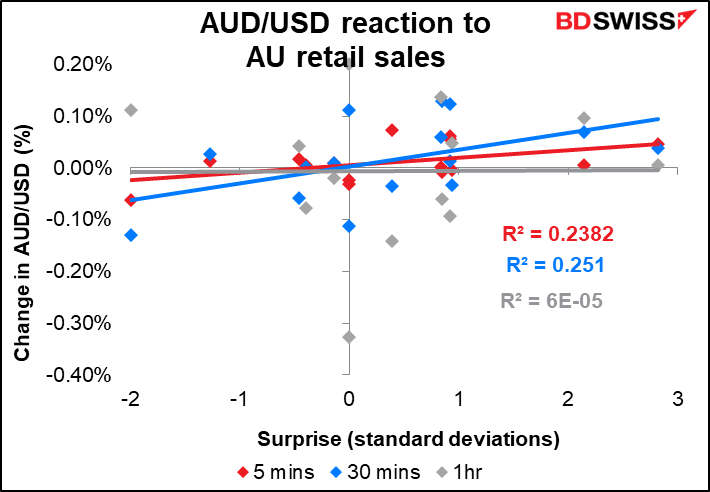 Then in the early morning UK time the Bank of England will announce UK mortgage approvals. They’re expected to be up slightly, which would be a good sign considering most people in Britain have floating-rate mortgages. If the number of mortgages is rising even as interest rates rise, that means the Bank of England can feel more comfortable that hiking rates won’t blow up the economy – or looked at another way, they’ll feel they have to hike rates further to dampen demand. GBP+ 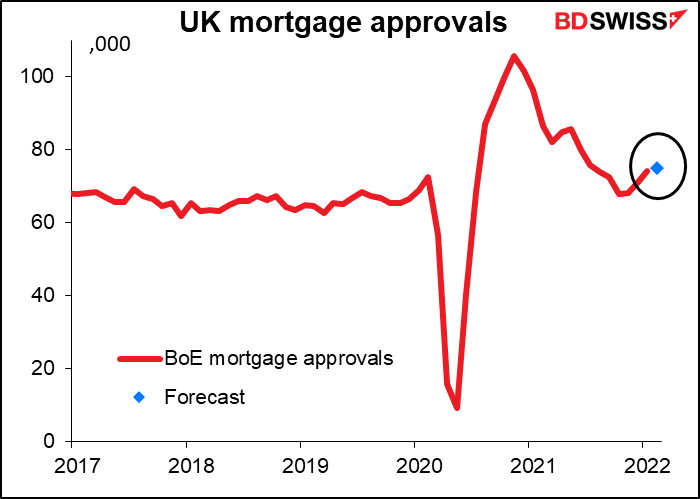 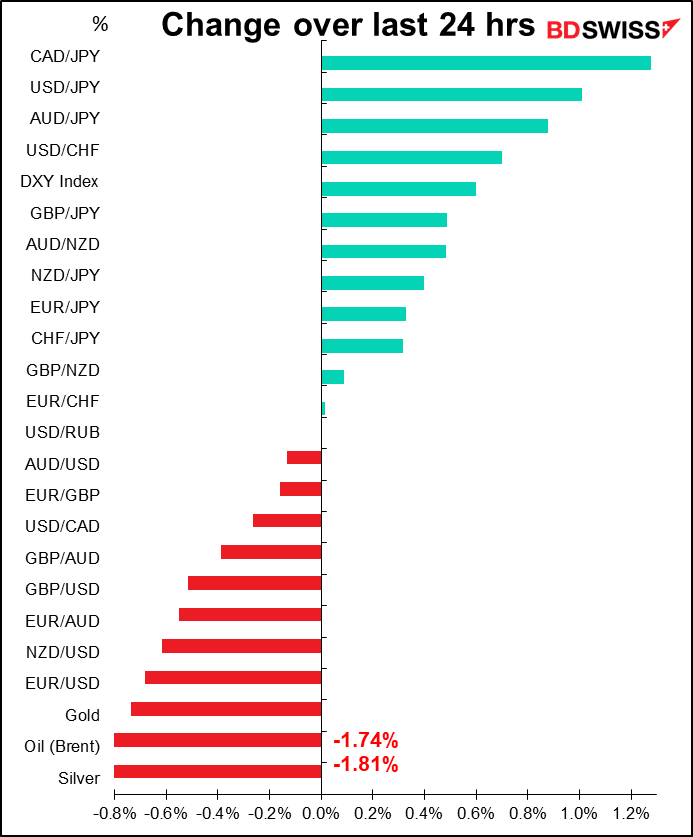