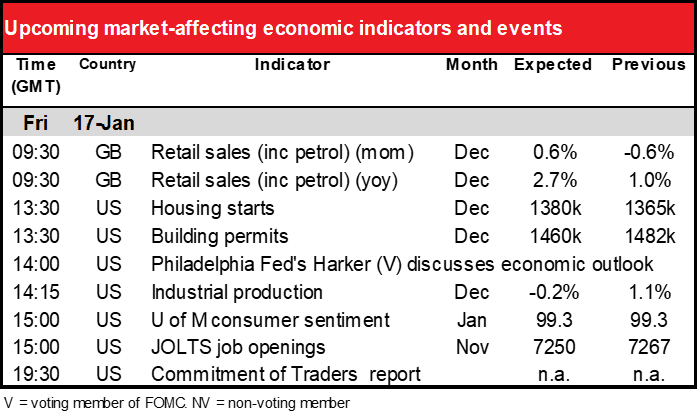 Interesting move today – both JPY and AUD lost about the same ground vs USD. This suggests that the “risk-on, risk-off” pattern is fading. Perhaps we’re seeing a return to fundamentals? Or perhaps the fear of further trade wars is fading (hence a weaker USD), but at the same time, people are reevaluating the possible boost to come from the settlement that we’ve seen so far and are seeing no reason to expect a sudden boom in demand (hence weaker AUD). China’s GDP figure was in line with expectations at +6.0% yoy (surprise, surprise) but industrial production beat estimates handily, accelerating to 6.9% yoy from 6.2% yoy (vs expected slowdown to 5.9%). In theory, better China data would normally be expected to boost AUD. Perhaps it’s a problem with Australia itself right now, in particular the fires and the likelihood of a rate cut. 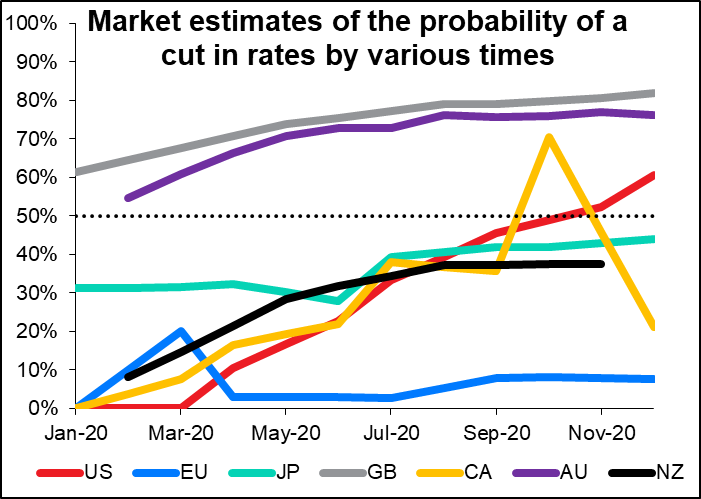 Elsewhere, the White House announced that Trump plans to nominate Christopher Waller and Judy Shelton to the Fed’s Board of Governors. Waller is a conventional nominee, albeit on the extreme dove end of the policy spectrum – Trump wanted to nominate St. Louis Fed President James Bullard, an uber-dove, but when Bullard declined, Trump instead asked the guy who taught Bullard at school:  Waller, who is now the head of research at the St. Louis Fed. That’s Trump’s prerogative.

Shelton on the other hand is probably less qualified than I am to be on the Board, and I’m no PhD in economics myself. She has an MBA and a PhD in Business Administration, but she’s definitely an odd choice: she’s called for a return to the gold standard, much beloved of Republicans, and has questioned the basic role of the Fed (“The Fed is not omniscient. They don’t know what the right rate should be. How could anyone?” she told the FT last year.) Yes it’s true that the Fed doesn’t know and in fact has a terrible track record in forecasting rates, but someone has to decide, unless you set rates by an automatic formula – and for example, the Taylor Rule for the US would currently peg the Fed funds rate at 4.9%, which I think we can all agree would crash the US economy. I think Waller will get approved easily and will add to the dovish tilt of the FOMC, but Shelton…I think the Senate will balk at approving her.

UK retail sales are expected to rebound after several months of weakness. That could be encouraging for the pound as questions about UK growth mount. 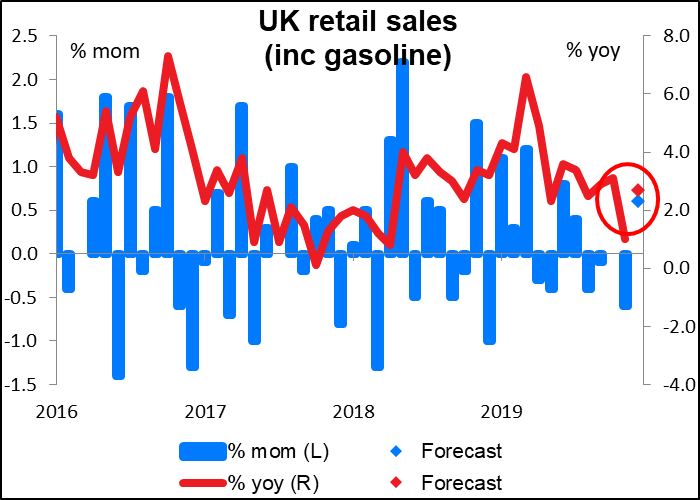 We then get a slew of US indicators:  housing starts, industrial production, the U of M consumer sentiment index, and the JOLTS job openings. Overall the market sees little change in these indicators, so if they come in as expected we’re going to wind up none the wiser but much better informed. That would likely be neutral for the dollar.

US housing starts are expected to be up, but building permits are forecast to be down from November’s level. Never mind – the surge in November brought the number of permits to a high for this economic cycle. Some mean reversion is only to be expected. The upward trend in the housing market seems to be intact. USD positive 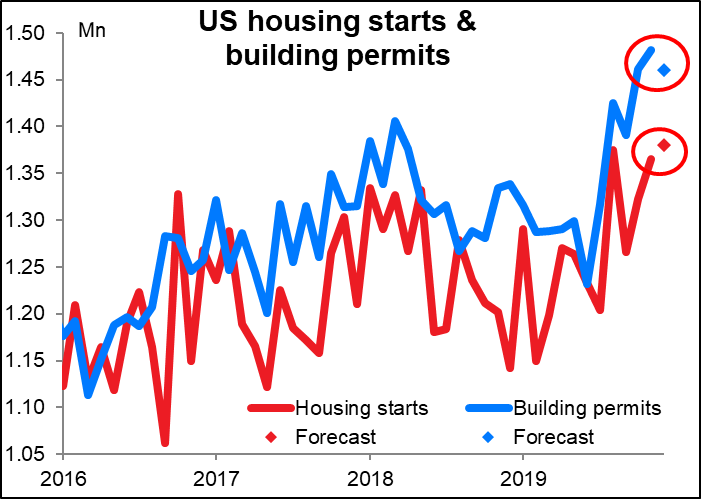 US industrial production is a big indicator for the US stock market, but not so important for the FX market. In any event, the small decline that’s expected after the surge in the previous month is about what’s necessary to keep the 6-month moving average unchanged, so in fact it represents a continuation of the current trend – USD neutral. 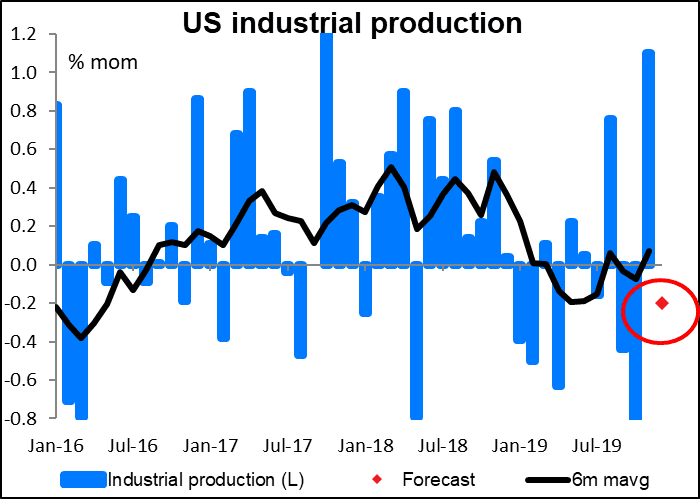 The University of Michigan consumer sentiment index is expected to be unchanged. That’s actually a bit disappointing, considering that the stock market continues to climb and the unemployment rate remains at a 50-year low. Nonetheless, no deterioration would at least be neutral for the dollar. 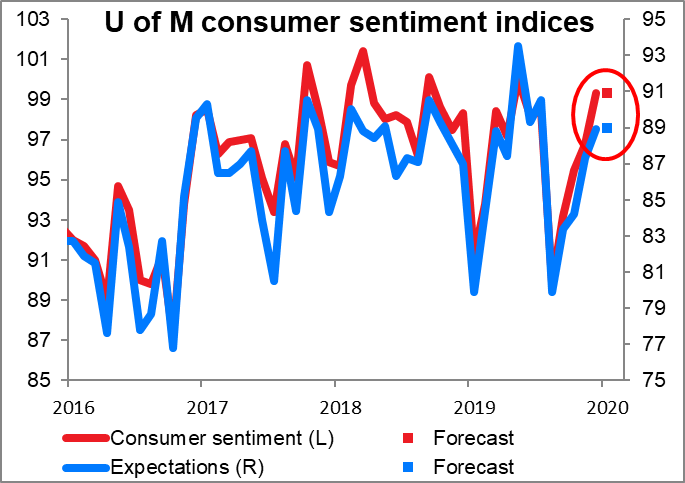 Finally, we get one of my favorite indicators: the Job Openings and Labor Turnover Survey, or JOLTS report. This is the converse of the unemployment figures:  instead of people looking for jobs, it’s jobs looking for people. It too is expected to be little changed from the prevous month, which suggests also no impetus for trading. 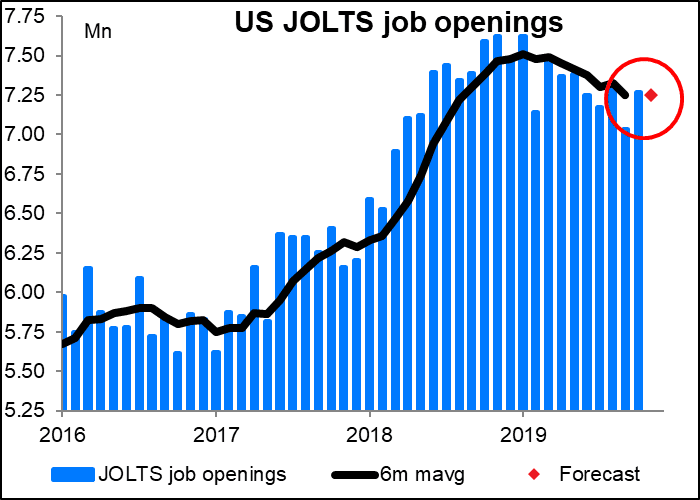 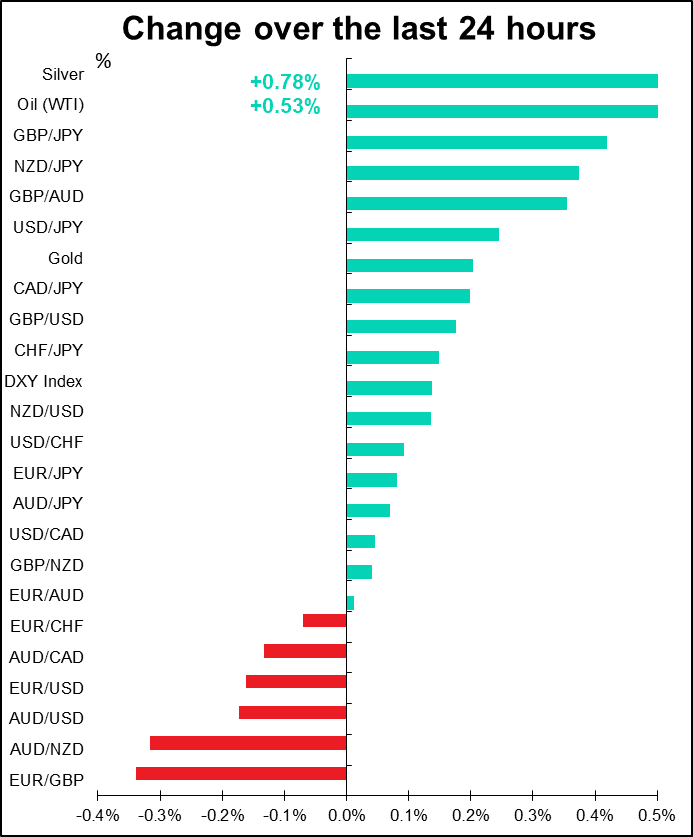