You are at:Home»MARKET PREVIEW»JPY & USD Up, Commodity Currencies Down Once Again; ADP Report, Japan tankan 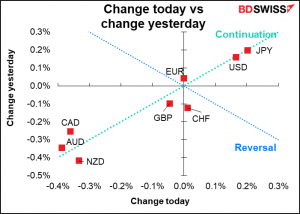 I find that graph of today’s change vs yesterday’s change immensely helpful in figuring out what’s going on in the markets. I’ll try to include it every day from now on.

As the graph shows, Tuesday was a continuation of Monday’s action: buying the safe-haven yen and dollar and selling the commodity currencies. EUR, GBP, and CHF are on the sidelines.

This kind of “risk-off” behavior in FX is surprising because it wasn’t the case in the stock markets. The major European bourses were all up, while the S&P 500 was stable and the NASDAQ up a bit (+0.2%). This morning most Asian markets are higher, with the exception of Japan.

Plus oil gained as the American Petroleum Institute (API) announced a large 8.15mn barrel drawdown in crude oil inventories, the sixth consecutive week of declines. OPEC+ meets on Thursday to decide whether to raise output in line with its plan for gradually cutting back on its cutbacks, as it were. There was supposed to be a meeting of experts today, the Joint Ministerial Monitoring Committee, but their meeting has been delayed until Thursday to allow ministers more time for behind-the-scenes talks. 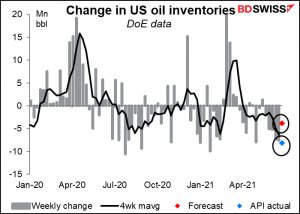 And yesterday’s economic news was generally favorable, with the Conference Board’s consumer confidence index rising to a post-pandemic high of 127.3, far above the. 119.0 expected, while in Europe, the EC’s Eurozone economic sentiment indicator hit a 21-year high of 117.9 (vs. 116.5 expected). The FX market today will probably be dominated by month-end flows. At the end of each month, portfolio managers have to rebalance their portfolios to keep their allocations stable. That means they generally buy more of markets that have gone down and sell some of the markets that have gone up. This creates demand in the FX market. The result is liable to be buying CAD and GBP and selling USD and CHF, according to my former colleagues at Deutsche Bank.

Also, looking at moves in the equity and oil markets, I would expect the recent “risk-off” trend to reverse and for the commodity currencies to regain some of their lost ground vs JPY and USD. 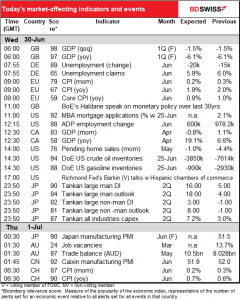 There’s lots on the schedule today!

German unemployment looks to be dishwater dull, as befits a labor market being propped up by the government. The market is looking for a small decline in the unemployment rate and a drop in the number of unemployed a bit bigger than the previous month but still pretty much in line with the modest declines seen so far this year. I don’t think this will get anyone particularly excited. 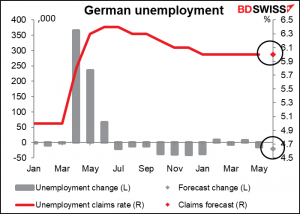 The EU consumer price index (CPI) on the other hand is expected to be thrilling, or at least as thrilling as European indicators get. For months now Eurostat has been guessing (technically it’s called “imputing”) the prices for many services, because many of them have been unobtainable, but this month finally most of them should be based on real, genuine, honest-to-God actual prices. Furthermore, this will be the last yoy print for a year that’s not distorted by Germany’s VAT cut last July and the unusual clothing sales last summer, which messed up the seasonal adjustment. So after this it may be some time before we have a good handle on inflation in Europe.

Yesterday’s German CPI was exactly in line with expectations (2.1% yoy, down from 2.4% yoy previously). 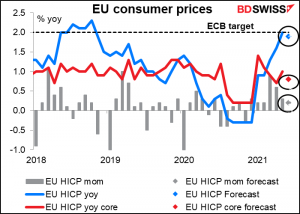 Then comes the indicator you’ve all been waiting for: the ADP report. Automated Data Processing Inc. (ADP) is an outsourcing company that handles about one-fifth of the private payrolls in the US, so its client base is a pretty sizeable sample of the US labor market as a whole. It’s therefore watched closely to get an idea of what Friday’s US nonfarm payrolls (NFP) figure might be. One point to note: the ADP adjusts its figures to match the final estimate of the NFP’s reading on private payrolls. It is therefore two steps removed from the headline figure that everyone focuses on, which is the initial figure for total payrolls, including government workers. So while it’s one of the best guides to the NFP that we have, it’s not perfect by any means – in fact, neither is the NFP figure itself, since it’s always revised. 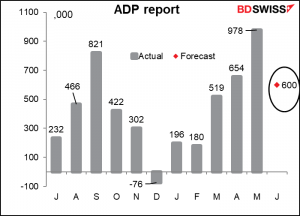 The ADP has massively overestimated the NFP figure the last two months (+486k and +436k) but it seriously underestimated the previous two months (-261k and -285k), so it’s hard to say what the recent tendency is. Over the last six months the ADP has averaged +100k over the NFP private-sector payroll figure, but I’m not sure the average holds much information value in this case. 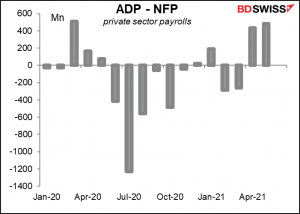 And of course, the private payrolls aren’t the whole story when it comes to the NFP, either. There’s government payrolls, too. Canadian GDP is expected to be down slightly, the first decline since April last year. This will come as no surprise to the market because Statistics Canada releases a flash version of the April industrial production report, which unfortunately is not publicly available but I suppose most research departments in the country subscribe. The decline was caused by COVID-related restrictions and supply chain disruptions, which depressed manufacturing, especially the auto industry.

As the virus restrictions are lifted and the economy opens up again, growth should resume. So then it’s wait until Japan comes in and we get the most important indicator out of Japan: the Bank of Japan’s quarterly Short-Term Survey of Economic Conditions, universally known by its Japanese abbreviation, the tankan. 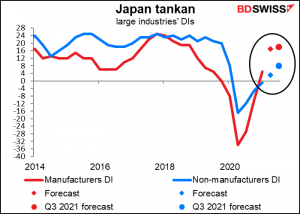 The tankan is expected to show conditions for manufacturers much better than before the pandemic began, but non-manufacturers are still far below where they were before. 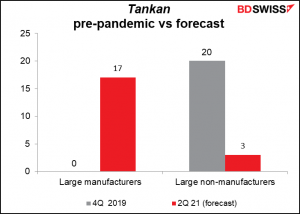 Unfortunately, the PMIs suggest that perhaps the tankan forecasts are overly optimistic. 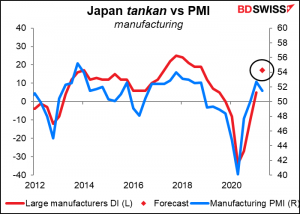 The relationship between the service-sector PMI and the tankan non-manufacturing DI is not that great which may be one reason why the PMIs don’t seem to carry the same weight in Japan as they do elsewhere. Nonetheless, this too isn’t promising. 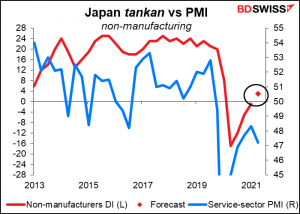 Australia is expected to show a record trade surplus in May. This is kind of a no-brainer, because the Australia Bureau of Statistics (ABS) issued a preliminary estimate on June 23rd. Exports of iron ore, coal, and meat rose during the month. It also looks like services swung into surplus too thanks to travel restrictions.

The ABS is releasing these preliminary figures as a special effort during the pandemic. The July 22nd preliminary report for June will be the last in this series. Thursday is the day when Markit releases the manufacturing purchasing managers’ indices (PMIs) for June, including the final versions for those countries that have preliminary ones. Japan and China start the ball rolling today. The Caixin/Markit manufacturing PMI is expected to be down one tick at 51.9. That’s exactly what happened with the official manufacturing PMI, out earlier this week, which also fell one tick to 50.9. 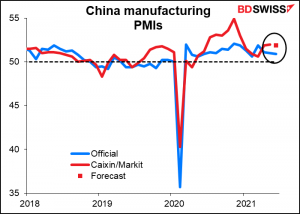 Finally, as the sound of the Alphorns wafts across the valley, announcing the start of a new day in Switzerland and the release of the Swiss consumer price index. The country has emerged from deflation, but inflation is still far below the Swiss National Bank (SNB) target and probably won’t make a bit of difference to the SNB’s monetary policy..

I think there should be deflation in Switzerland. Everything is preternaturally expensive. Either the currency should fall in half or prices should fall in half. The country is living proof that “the law of one price” doesn’t hold, nor does the purchasing power parity (PPP) theory of currency determination always work. (The most egregious example that I found was that a ticket from Geneva to Paris purchased on the Swiss national railroad (SBB) website is substantially more than the same seat on the same train purchased on the French national railroad (SNCF) website, even though you could have both websites open on your browser at the same time and compare the price yourself.) 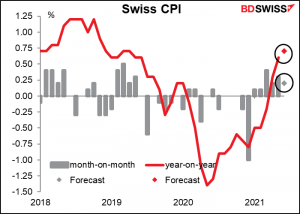 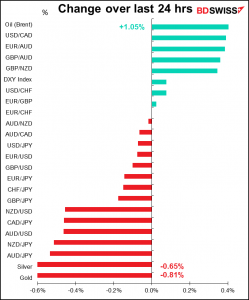