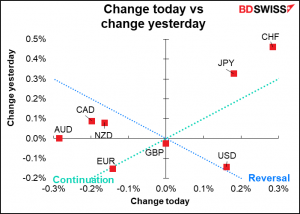 Another odd day when the stock markets and the FX market contradicted each other. Maybe not though – maybe FX is following European stocks, not US stocks. European markets were down almost across the board (Switzerland being the main exception) with the Euro STOXX 50 off 0.4%. But The S&P 500 managed to rise +0.3%, eking out a record high. The NASDAQ was also up 0.6%. The NASDAQ is still 1.0% below its record high of Sep. 7th.

CHF once again led the pack. EUR/CHF broke through the support at 1.07 and slipped below the 1.0681 low of Oct. 14 even though German Bund yields were up on the day. 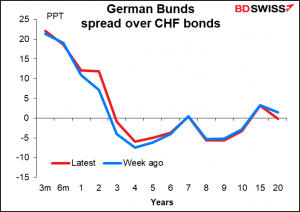 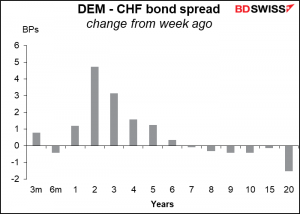 GBP is surprisingly stable despite an interview in the FT with the Bank of England’s new Chief Economist, Huw Pill, who said that UK inflation is likely to rise “close to or even slightly above 5%” early next year and that the central bank would have a “live” decision on whether to raise interest rates at its Nov. 4 meeting. This is a big upgrade in the Bank’s inflation forecast, which was previously expected to peak at 4% in Q4 – so higher for longer.

Nonetheless Pill was careful not to suggest rates needed to move much higher than the 0.75% level that existed before the Covid-19 pandemic. “We do not see, given the transitory nature of what we’re seeing in inflation in our base case, a need to go to a restrictive stance,” he said. Note that since the Global Financial Crisis, Bank Rate has been kept at 0.75% or below regardless of the inflation rate. EG in September 2011 it hit 5.2% but the Bank didn’t react.

The question is whether the current high level of inflation will indeed prove transitory and if not, then what the Bank of England – and other central banks – will decide to do about it. 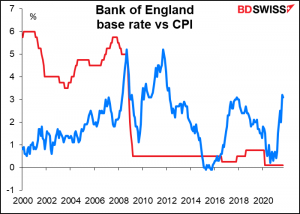 Pill isn’t the only one worried about higher inflation. One of the key moves yesterday was an across-the-board increase in break-even inflation rates globally. 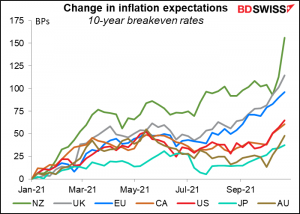 US breakevens in particular went shooting up. Five-year breakevens jumped 17 bps to hit a record high (data back to 2003) while 10-years were at the highest since April 2011. The resilience of stock markets in the face of such higher inflation expectations suggests that investors expect central bankers to refrain from tightening policy to a restrictive level, as Pill said. In the US, that would go along with the Fed’s new “flexible average inflation targeting” regime, in which “following periods when inflation has been running persistently below 2 percent, appropriate monetary policy will likely aim to achieve inflation moderately above 2 percent for some time.” Nor is the market convinced that these higher inflation rates will be “transitory.” The Eurozone’s 5yr/5yr foreward inflation swap, a measure of what the market expects inflation to be for the five years starting five years from now, is 1.94%, almost back to the European Central Bank’s 2% target, the first time since Sep. 2014. 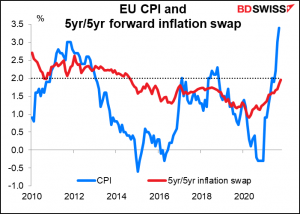 Anecdotal evidence confirms the market’s fears. Intel CEO Pat Gelsinger said the chip shortage could start improving next year but he stuck with his forecast from July that it would last until 2023. Consumer products bellwether Unilever said it had raised its prices by an average of 4.1% during Q3 and Chief Executive Alan Jope said, “we haven’t reached peak inflation yet.” “We see inflationary pressures continuing through the first half of next year,” he said.
Against this background, the general plunge in commodity prices seems inexplicable to me. Perhaps this is contagion coming from China. I see headlines such as “Coal extends price collapse in China after authorities intervene” and “Oil extends decline as rally on energy crisis runs out of steam.” 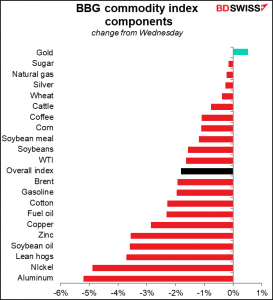 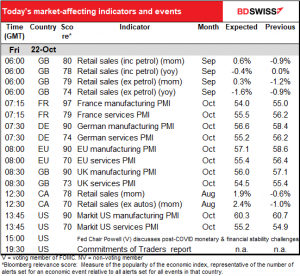 Today’s the day for the preliminary purchasing managers’ indices (PMIs) for the major industrial countries. Markit, the company that compiles the PMIs, starts sending out questionnaires around the 12th of the month. By now it has some 80% of the responses that it’s going to get. So this is usually a pretty good estimate of the final figure. 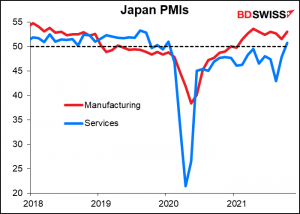 We don’t have the tertiary sector index for September or the Eco Watchers’ Survey for October yet, but neither has shown much of a revival so far. That makes me doubt the PMI somewhat. 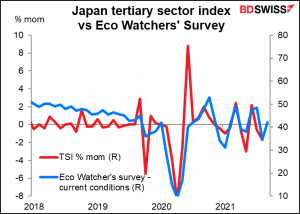 But if the other countries show similar results, we could be in for some significant surprises today. 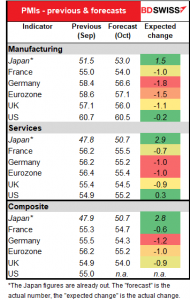 In other events, Fed Chair Powell will take part in a virtual panel discussion on post-COVID monetary and financial stability challenges hosted by the South African Reserve Bank. You can watch it live here if you so desire. 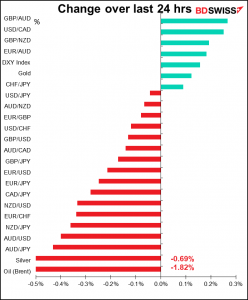