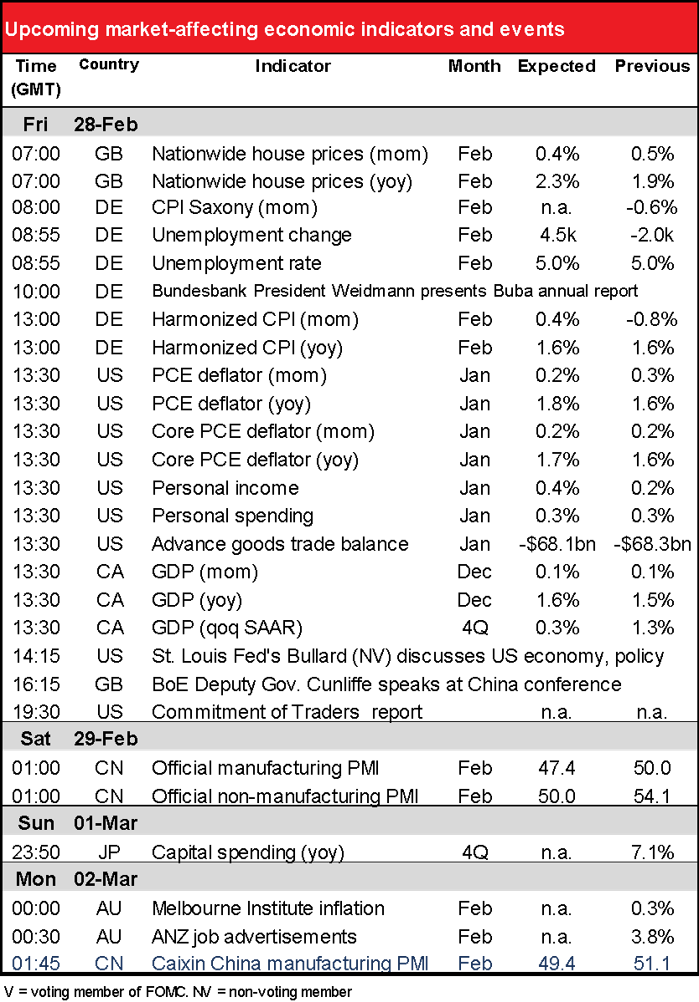 Well, it wasn’t so long ago that we were bemoaning the fall in volatility in the FX market. We got our wish! But even so, looking at how FX markets have compared to other markets, we’re still not that volatile. The JP Morgan G7 FX volatility index is calculated much like the equity market VIX index, using three-month at-the-money forward option vols. We’re still well below average for the last several years, although climbing back up. Meanwhile, vol in stocks, bonds and gold has exploded. (You can’t see the last point for the grey line, US Treasuries, very well but it’s up about as much as the blue line, which is gold vol. These lines have been standardized, that is, they show how many standard deviations above or below average the vol is. The actual vol for each asset is very different.) 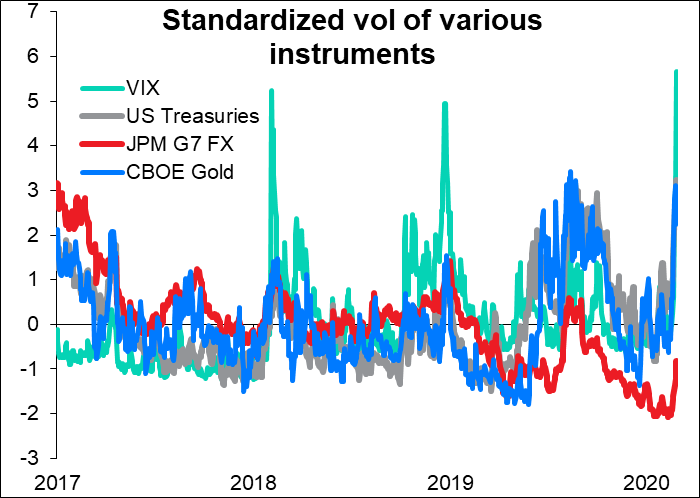 Stock markets were down across the board. US stocks have now lost about half of all of last year’s gains. This morning, every stock market in Asia is down, with several markets off more than 4%.

The behavior of the Trump administration is indescribable. As I mentioned yesterday, Trump appointed VP Pence to head the government’s task force on the coronavirus – Pence, a guy with no medical background who doesn’t believe in science. Pence quickly took two steps: 1) he appointed Treasury Secretary Mnuchin and National Economic Council head Kudlow to the task force, and 2) ordered everyone in the government, including Cabinet ministers, to clear all statements on the subject with the task force before speaking to the public. (To be fair, the task force does include US Surgeon General Dr. Jerome Adams. Dr. Adams is an anesthesiologist who previously served as Health Commissioner of Indiana when Pence was governor of the state.) It’s frightening that the government is trying to muzzle people and prevent them from giving anything but the official view on the crisis. This administration has zero credibility – no one has any confidence whatsoever that they will tell the truth. And if investors don’t know what’s happening, they’re going to assume the worst and move their money accordingly. I think the collapse in markets yesterday was as much a response to the Administration’s handling of the crisis as it was a response to the crisis itself.

(Those of you who read my weekly comment may remember the Japanese phrase gongo-doodan  言語道断 that I used recently to describe the impeachment proceedings. Originally it’s a Buddhist term that means “the ultimate truth of Buddha’s teaching cannot be expressed by (mere) words,” but now it’s used pejoratively to mean “words cannot express,” or, according to my textbook, “unspeakable, unutterable, unmentionable, outrageous, unpardonable, inexcusable, preposterous, absurd, abominable, shocking, scandalous, beyond description.” I find this phrase coming to mind more and more.)

Getting back to the FX market, I think there were two main interesting points of the day. One, the euro gained and the dollar fell. There are several reasons behind this: 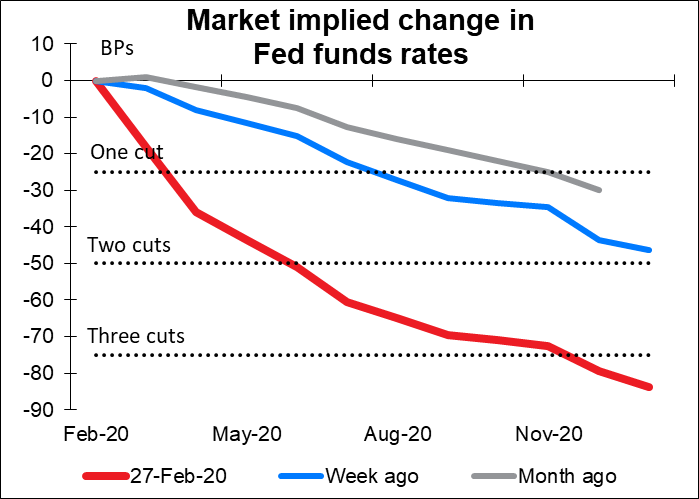 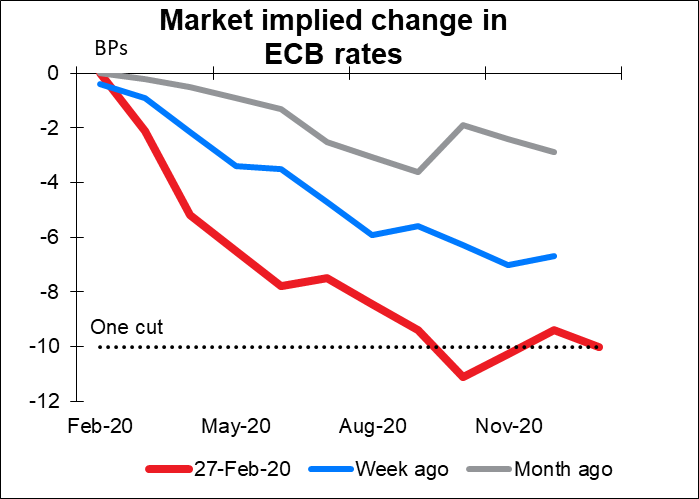 The other interesting point was the continued fall in GBP. GBP is about the only independent, non-virus story in the market nowadays. UK PM Johnson told the EU that he’ll walk away from the negotiating table in June if it’s not clear he’s going to get a Canada-style free trade agreement. The differences between the two sides aren’t all that great, but still, the idea that they have to reach even the basis for an agreement in four months when it took them over three years to agree on the terms of the Withdrawal Agreement seems to be setting a hopeless deadline that’s likely to lock them into no deal at all. GBP negative

Meanwhile, I’d like to call your attention to this morning’s Japan industrial production (IP) figures. Japan’s monthly IP figures are unique in that at the same time as the government gathers data on past production, it also asks about current and future production. So while IP for January beat estimates handily — +0.8% mom vs forecasts of +0.2% (previous +1.2%), the key points were the forecast of a surprisingly healthy +5.3% mom increase in February followed by – wait for it – a 6.9% plunge in March. This would be the largest drop since the March 2011 earthquake. 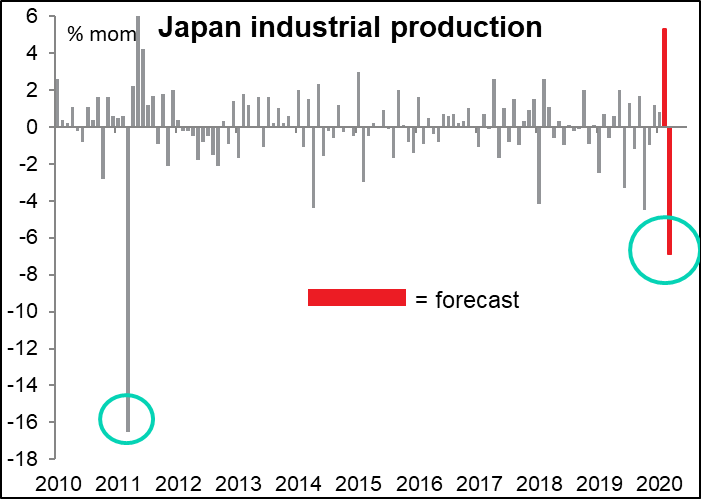 A fall of that degree would bring the level of IP back to where it was in 2013 when the much-touted “Abenomics” was just getting started. Not much of an achievement, is it? It looks like Japan is headed to recession. That’s likely to be negative for the yen, if economics can overcome the hedging behavior of Japanese investors. 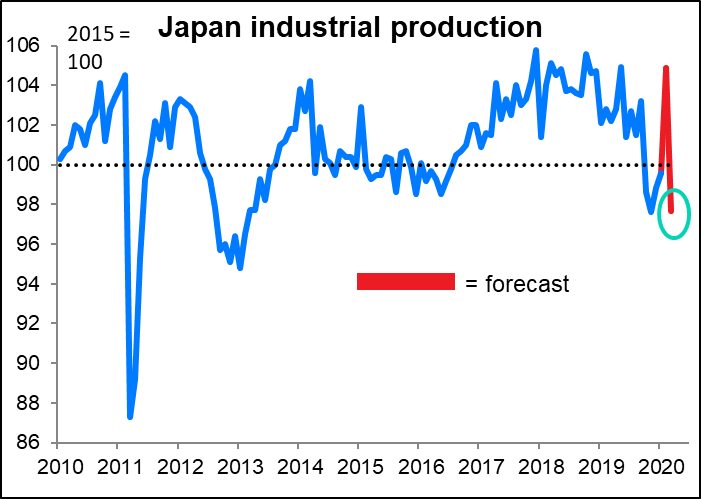 (Note:  there will be no market comment on Monday, a national holiday in Cyprus. That comment would usually cover the Reserve Bank of Australia meeting that takes place Tuesday morning in Australia. Please see our Weekly Outlook for information concerning that meeting.)

German unemployment is expected to be fairly stable. The market expects the unemployment rate to remain at 5% for the 10th consecutive month (14 out of 16), which makes me think there’s either a problem with the statistics or a problem with my Bloomberg data feed, because most statistics are just not that steady. The forecast is for a small (4.5k) increase in the number of unemployed people, but this is not significant. I expect the steady employment picture in the face of the economic difficulties that Germany is facing will be positive for the euro. Germany’s inflation rate is expected to remain unchanged at a level below the ECB’s target of “close to, but below, 2%.” It’s debatable whether headline inflation would be negative for EUR though, because the ECB focuses on core inflation. Nonetheless these are the last inflation figures that the Governing Council will get before its 23 March meeting. Continued below-target inflation, even at the headline level, could prompt some discussion about whether further measures were necessary. EUR negative 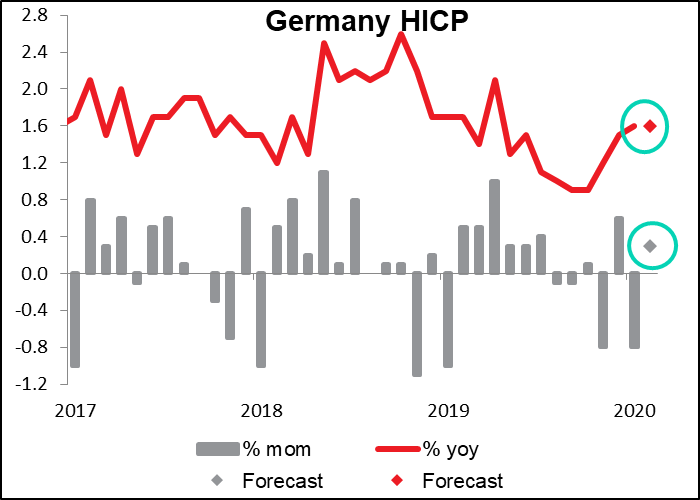 When the US starts up, there’s a whole slew of indicators coming out at the same time.

The personal consumption expenditure (PCE) deflator and its sub-index, the core PCE deflator, are the most important indicators out this week, in my view, because they’re the Fed’s preferred inflation gauges.

Both deflators are forecast to accelerate somewhat, bringing them nearer to the Fed’s 2% inflation target. That’s pretty good, considering everything else that’s going on in the world. With the unemployment rate at a 50-year low and growth around what the Fed assumes is the potential growth rate for the country, it means the current situation does not warrant a cut in interest rates by any means – although given the uncertainty facing the economy because of the virus, the Committee may still choose to cut for “insurance” purposes.  USD-positive 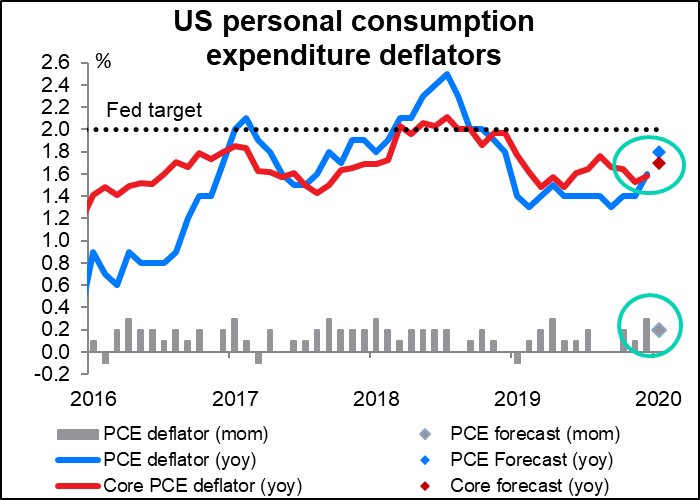 The PCE deflators are released as part of the personal income and spending data. Incomes are expected to rise at an above-trend rate during the month, while spending is expected to continue to rise at the trend level. These data should reassure the Fed that the US consumer can continue to carry the US economy on his or her broad shoulders, or in their pockets perhaps would be a better way of putting it. USD positive 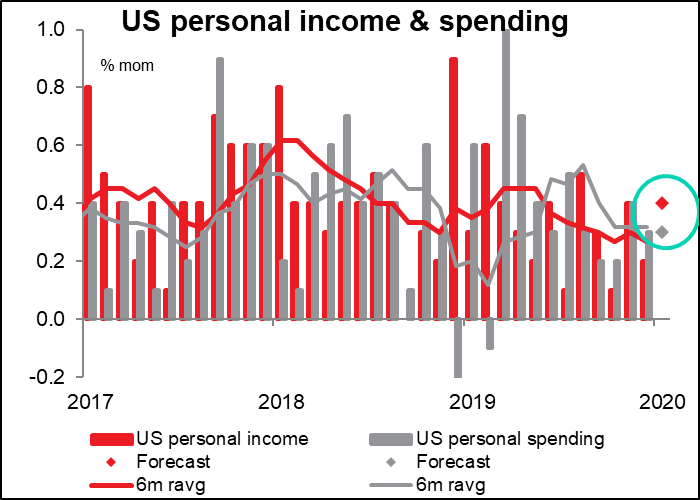 The US advance trade balance gives the trade balance (usually deficit) on merchandise trade, excluding trade in services, where the US has a surplus. The deficit is expected to remain about the same. It seems to be on a narrowing trend, but unfortunately for the wrong reason – imports are falling faster than exports. USD neutral 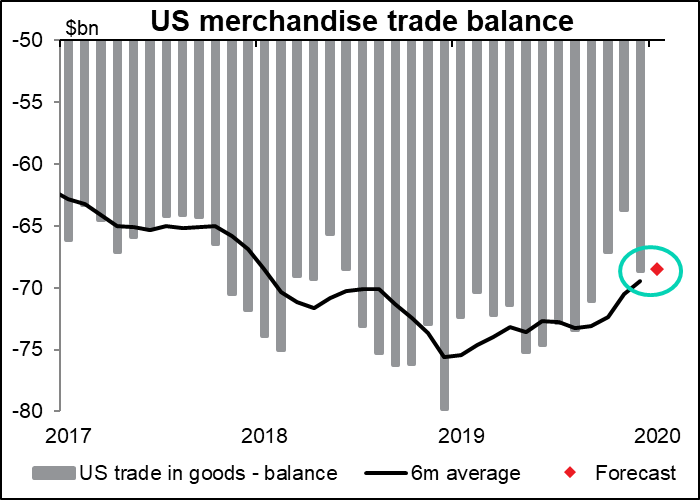 Canada’s December GDP will include the overall figure for Q4. It’s expected to be pretty grim, but that shouldn’t come as any surprise – at its January meeting, the Bank of Canada estimated that Q4 growth would be 0.3% qoq, rising to 1.3% qoq in Q1 2020. It won’t surprise anyone then that the market median estimate for Q4 growth is…wait for it…0.3% qoq! Although the range of estimates is surprisingly wide:   from 0.0% to an astonishing 0.8% (only one person at +0.8%, the next highest is +0.5% — and frankly that estimate seems so wild, I wonder if the person at Bloomberg who entered the data into the system didn’t misread a “3” for an “8”.) Since this is expected to be exactly in line with the BoC’s forecast, it should be neutral for CAD. 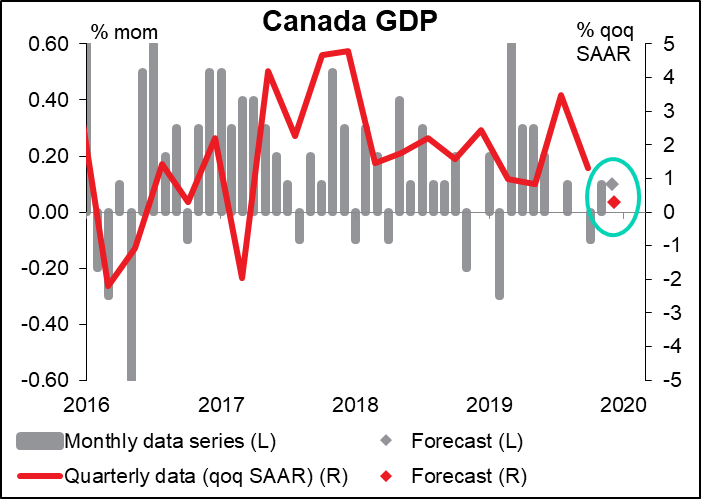 Over the weekend we get some of the most important data we’ll see nowadays: the China purchasing managers’ indices (PMIs). The official ones come out on Saturday while the Caixin/Markit manufacturing PMI comes out Monday and the service-sector PMI on Wednesday. While this is important, I don’t know how the market is going to take the numbers – whether they’ll compare them to the forecasts or to each other or judge simply by how big the gap is. For that matter, I don’t have any idea how economists forecast it, either. They may just be wild guesses. The estimates for the official manufacturing PMI range from 30.0 to 50.1, while for the service-sector PMI it’s from 35.0 to 53.5 – i.e., no one has a clue. The numbers are clearly important but they will clearly be difficult to evaluate, too. 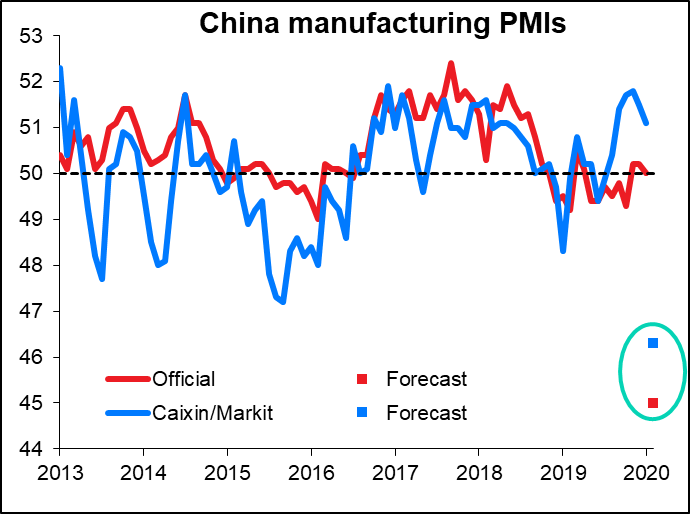 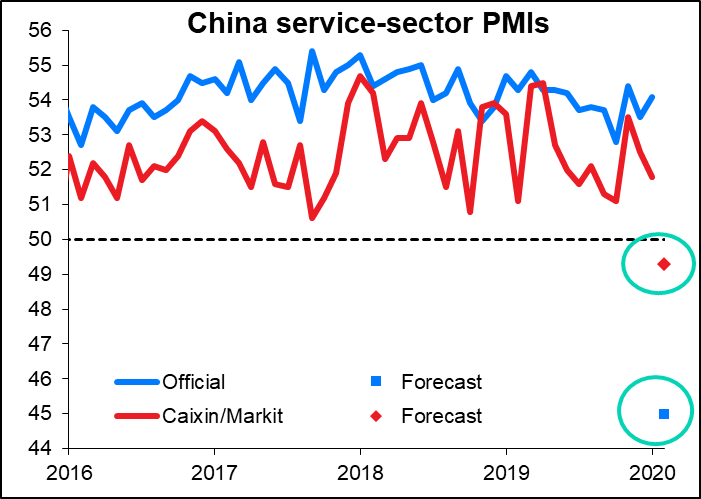 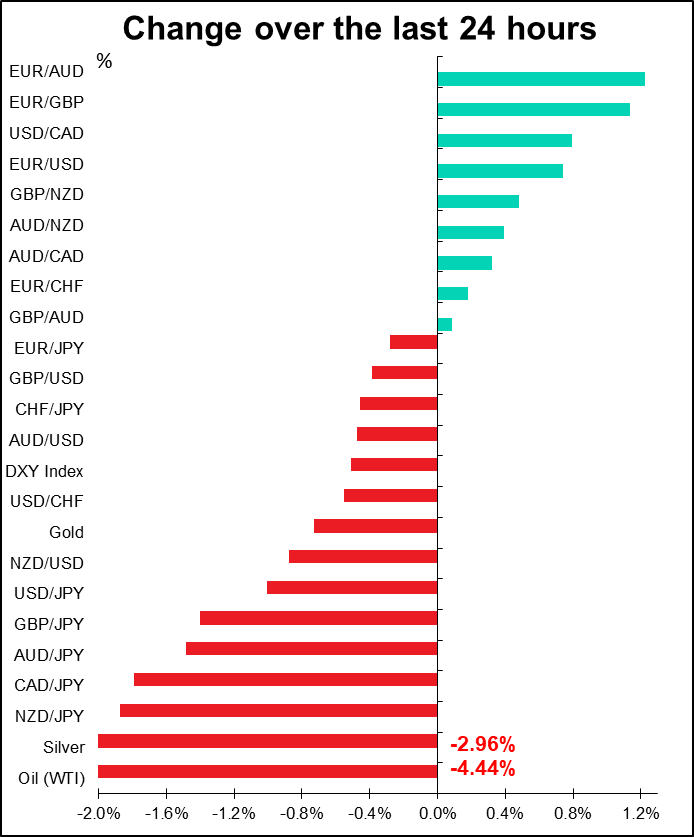