You are at:Home»MARKET PREVIEW»How Does Apple Stock React To Product Releases?

Face recognition, wireless charging, and all-glass constructions are some of the groundbreaking features that Apple has introduced in its latest product releases. While Apple enthusiasts flock to buy the latest iPhone that the conglomerate releases, for traders worldwide, what matters is how the stock will react, both in the run-up to the launch and after the event. Looking back at historical data we see that a new iPhone release will definitely affect stock price but not always in the same manner. It all comes down to an intricate interplay of market expectation, leaks, rumours and of course the public’s final verdict which will drive demand after the big reveal is made.

What happens to APPL before the release of a new product? 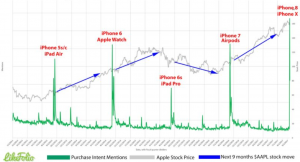 Apple stock has soared 1200% from the launch of the iPod in 2001 to more recent years. Prior to the end of 2001, Apple stock was trading at around $1.50 per share. About two and half years after the iPod launch the stock was well on its spectacular upward ascent. Today, AAPL’s price has reached an impressive high of $180 per share, an extremely attractive valuation.

It appears that one long-term driver of Apple’s stock has always been its ability to deliver innovative products with user-friendly interfaces. Without innovative new product lines, Apple loses the luster of tech leadership.

Unsurprisingly, in recent times iPhone sales are the largest revenue generator for the company. In the days leading up to the original iPhone release, AAPL stock was on a steady decline, but with the iPhone 3GS a couple of years later, Apple ticked higher about 10 days before the announcement. So what changed? Over the last decade we can definitely observe that the stock was reacting 10-30 days before the product release, sometimes by edging higher and other times by edging lower.

After the 2010s the social media revolution enabled product leaks and rumours to spread like wildfire before each new iPhone release. Products that generate high emotion and attachment tend to generate intense speculation as well. Rumours can help shape a product, so the APPL price would react based on these rumours. If the public was disappointed with the rumoured features then the stock edged lower. On the flipside, if the market hype was positive enough, APPL would be supported. For tech giants like Apple, the only way to have any control over rumours is to upstage them with the product itself.

What happens after an iPhone reveal?
Seventy percent of the time, Apple drops the day after the event, which seems to be in line with the “buy on the rumour, sell on the news” trading philosophy. However, it is also important to note that the price of APPL has been appreciating over the years, which proves that over a longer term basis, innovation is what drives a tech stock higher.

The bottom line
Each of these products have not only been revolutionary for Apple, but for the entire industry. Apple’s stock price has not always reacted well to these products, but all of the products mentioned had a major positive impact on the company’s stock valuation in the long run.

*Please note that this article is not meant to be construed as investment advice or suggestion of an investment strategy with respect to any financial instrument.