Another momentum day: the changes Wednesday were pretty much in line with the changes Tuesday. I’m glad I made this graph – I’m getting more use out of it than I expected. In this graph, currencies below the line moved more Wednesday than they did Tuesday, while those above – CAD, basically – moved less.

Note EUR pretty much in the center both days. The action isn’t there at all. It’s in the commodity currencies and JPY. 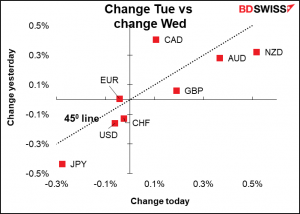 Japan was disappointing, with the manufacturing PMI falling and the service-sector PMI gaining a little but remaining below 50. But no one expects Japan to be an engine of growth for the global economy. 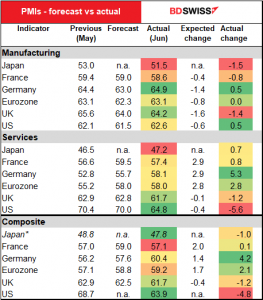 The good performance of the Eurozone PMIs didn’t help European assets all that much though as the Euro Stoxx 50 was down 1.1%. In contrast, US equities were largely unchanged – the S&P 500 fell 0.11% while the NASDAQ tip-toed up 0.13% to a new record high (although all record highs are new, so that’s redundant.)

The strong PMIs boosted inflation expectations, and that lifted the prices of commodities… 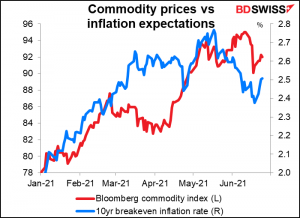 …particularly economically sensitive commodities. Note though that NZD was the best-performing currency even though agricultural commodities lagged. It appears to me that the market is not particularly discerning when it comes to NZD; it doesn’t seem to matter which commodities are up, traders simply note that “commodities are higher” and buy NZD even though the price of the commodities that New Zealand exports might not be rising. This is different than AUD, which tends to rise & fall with the price of iron ore, and CAD, which tends to move along with oil. 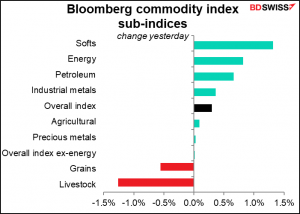 Although in the longer term the relationship does generally hold, probably because of terms-of-trade effects. The ASB Bank NZ commodity price index tracks the prices of commodities produced by New Zealand. 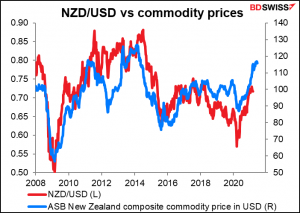 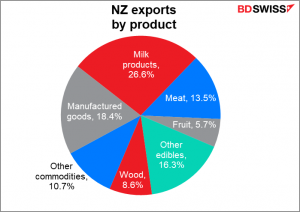 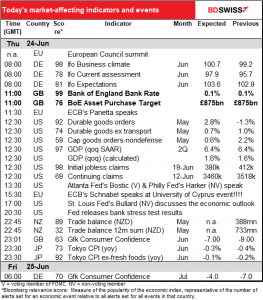 The main focus today will be the results of the Bank of England Monetary Policy Committee (MPC) meeting. I dealt with this at some length in my Weekly Outlook, as I always do, but in fact there isn’t much to say about it – I just padded my report with some pretty graphs to make it look like I did a lot of work. After all, how much can you say about “they’re not going to do anything”?

The main point will be whether the MPC becomes any more hawkish in light of the Fed’s change to a tightening bias. The MPC has several domestic reasons that would support a more hawkish stance Since their last meeting in May, growth has accelerated, inflation has moved back to their target level, unemployment has fallen and the number of jobs has increased for two months in a row. But that’s pretty much what they expected when they put together their quarterly Monetary Policy Report in May.

At the same time, they must be somewhat concerned about the recent pick-up in virus cases and the four-week extension of restrictions. The worsening virus situation may preclude any more hawkish tone at this meeting.

Accordingly, I don’t expect them to make any changes in their policy or their forward guidance. I would expect them to be a bit more optimistic about the economy in line with what’s already happened, but that’s about all. GBP could benefit slightly from an improvement in tone.

There’s also going to be a European Council meeting today and tomorrow, including a Euro Summit today. The Euro Summit will discuss the economic challenges for the euro area in the aftermath of the COVID-19 crisis and review progress on the Banking Union and Capital Markets Union. EU leaders will review the state of play of the implementation of Next Generation EU. They are expected to discuss the recommendation on the economic policy of the euro area. Some foreign policy issues, such as migration and relations with Turkey, will also be discussed.

If you want to read more about the topics to be discussed at the Euro Summit, you can find the background information here.

By contrast, the Euro Summit only includes the countries that are members of the Eurozone and focuses exclusively on economic policy.

Today’s indicators start out with the Ifo business climate indices. They’re all expected to rise, with the “current assessment” expected to rise more than the “expectations” index. That suggests the recovery is largely discounted, which may help to explain why the better-than-expected PMIs boosted neither the Euro nor the European stock markets. 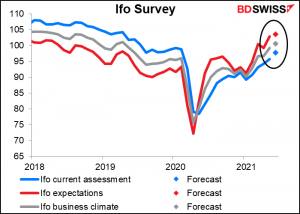 US durable goods orders are expected to be up a smashing 2.8% mom after April’s unusual fall. The rebound is due in part to a bounceback in aircraft orders at Boeing. 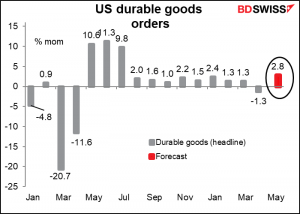 It’s not all aircraft, though. Orders excluding transportation equipment are expected to be up as well, for the third consecutive month. That suggests a continuing rebound in investment, which may be seen as positive for the US economy and positive for the dollar. 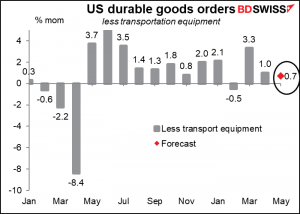 Within this report, the market will also be looking at the inventory-to-shipments ratio for signs of backlogs and bottlenecks that might result in higher prices. The overall inventory-to-shipments ratio for durable goods was at 1.77 in April, compared to 1.83 in Jan/Feb before the pandemic – so showing no particular problems. The index for transportation equipment however has risen to 2.04 from 1.86 before the pandemic. It looks like inventories of auto parts are piling up due to the lack of one critical component: semiconductor chips. This problem may take some time to resolve but it should be resolved eventually. When it does, auto production & shipments will increase and the price rises we’ve been seeing due to shortages should come down. The question of course is when this will happen. 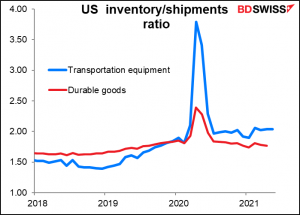 The third and final revision of US Q1 GDP should be of only passing interest to the market.

Last week’s US initial jobless claims were shocking – a rise of 37k instead of the expected fall of 16k. It was the first rise since April 23rd. Economists believe that was a one-off and claims will fall back again this week – they’re expecting a decline of 32k, reversing most of the previous week’s increase. That would probably be encouraging in that it would confirm Fed Chair Powell’s rosy evaluation of the US labor market. It could send US interest rates higher and the dollar higher along with it. 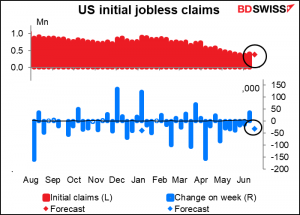 There hasn’t been that much interest in the continuing claims figures recently as they’ve been distorted by people rolling off the eligibility due to time restrictions. However those who pour over the data with a fine-tooth comb will be taking a closer look at them this week, focusing on the four states — Alaska, Iowa, Mississippi, and Missouri – that decided to prematurely end the enhanced Federal unemployment benefits as of June 12th. Twenty other states will follow suit over the next several weeks. The “theory” behind this move is that the high rate of unemployment benefits is discouraging people from taking jobs (what kind of jobs are they that pay less than unemployment benefits?). People will be watching the data to see if this “theory” is true. I haven’t seen any reputable economic research backing it up – it seems to me to be just the usual Republican fear that someone, somewhere who doesn’t wear a shirt & tie to work might be benefitting from the government. 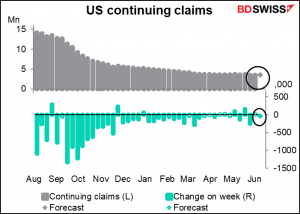 Then overnight there’s no forecast available any more for the New Zealand trade data, but here’s a graph anyway since it’s important for the FX market. 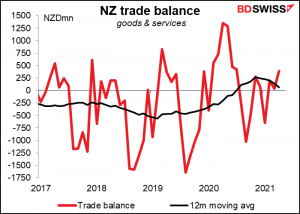 The Tokyo CPI should confirm that Japan is still in deflation, about the only country in the world with that problem. This dismal performance is why I expect Japan to be among the last central bank to ever raise rates (a contest with the SNB) and why I think JPY is likely to decline over the medium term as other central banks begin “thinking about thinking about” normalizing their monetary policy. 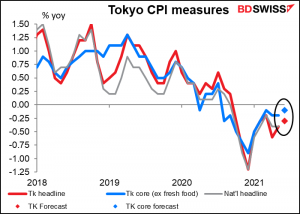 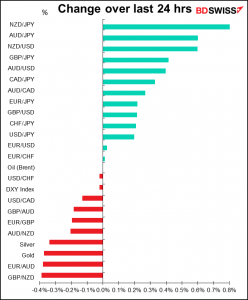