You are at:Home»MARKET PREVIEW»Gold Dips As Dollar Climbs On US Tax Cut Progress

3 Things You Need To Know About Today’s Markets

1. Gold Dips As Dollar Climbs On US Tax Cut Progress

Gold prices dipped in early Monday trading, as the dollar gained after the Senate passed a bill to overhaul the country’s tax system. The U.S. dollar bounced to a two-week high today while the S&P futures jumped after the passage of the Senate tax bill over the weekend, a move that also encourages more aggressive rate hikes in the world’s largest economy. The Senate narrowly approved the overhaul on Saturday, pushing President Donald Trump a step closer to his goal of slashing taxes for businesses and the rich. Traders will also be focusing on a meeting scheduled for British Prime Minister Theresa May and EU Commission President Jean-Claude Juncker later today, as the two will work on a Brexit deal. It is also worth noting that the euro traded lower this morning, while the British pound was steady amid media reports that an agreement was near on the terms of the Brexit divorce.* 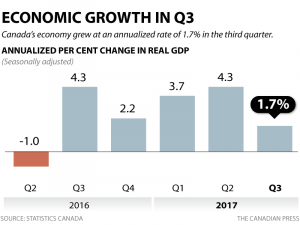 According to data released on Friday, the Canadian economy expanded at an annualized rate of 1.7 per cent in the third quarter of 2017 while Canada added 80,000 jobs in November. The data pushed the CAD higher against the dollar last Friday while today the loonie stabilized against a stronger dollar. However, exports fell on a quarter-over-quarter and Canada’s real GDP growth for the second quarter was also revised to a lower reading. It is worth noting, that the third-quarter number was a little weaker than the Bank of Canada’s October forecast, but the central bank is projecting real GDP to expand by 2.5 per cent in the fourth quarter. Canada’s economy appears to be gradually expanding as the latest GDP figure follows four-consecutive quarters of stronger growth.**

3. Bitcoin Is Now Bigger Than Buffet And Gates

Bitcoin noted an extraordinary price surge over the weekend and is now nearing $12,000 which means its market capitalization now exceeds the annual output of entire economies and the estimated worth of some of the world’s top billionaires. The cryptocurrency has now solidified its climb this year to more than 1,000 percent. Market tracker Coinmarketcap.com is now marking the total value of all bitcoins in circulation at $190 billion. Currently, bitcoin eclipses the fortunes of the world’s richest billionaires Bill Gates and Warren Buffett combined!***

You can find and trade all of the above mentioned equities and commodities on BDSwiss Forex/CFD platforms.