You are at:Home»MARKET PREVIEW»GBP up, Silver Soars, EUR Down Despite Agreement

Good news on the vaccine front sparks “risk on” – The coronavirus vaccine developed by Oxford University and AstraZeneca has shown promising results in the first phase of its clinical trials, according to the FT. At the same time, CanSIno Biologics’ experimental vaccine showed promising result s in a mid-stage clinical study and will move onto the third stage of testing, the last required before a drug can be sold.

One might have thought that stocks were already discounting not just a vaccine but a return to normality in a matter of days, not weeks much less the months if not years that’s the reality. Nonetheless, the “Daily Infectious Disease Equity Market Volatility Tracker,” which tracks how many references there are to infectious diseases in reports on the equity market, suggests that it’s become a bigger factor in the market over the last few days. 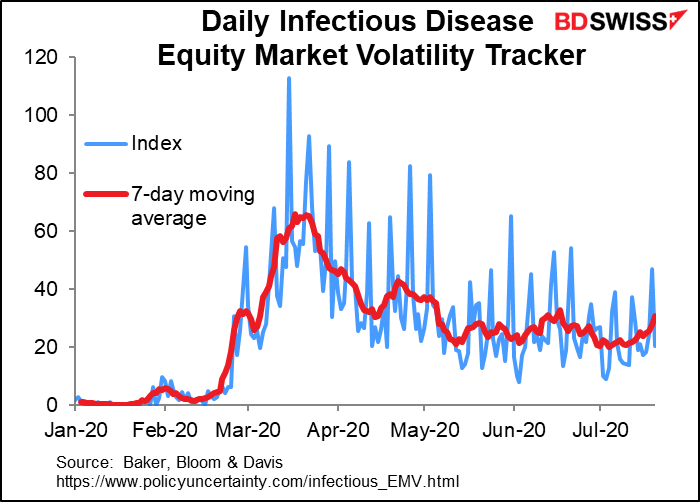 In the “risk-on” environment, as usual USD, JPY and CHF retreated, while the commodity currencies gained.

The EU is closing in on an agreement for the recovery fund. The original proposal was EUR 500bn of grants, EUR 250b of loans; after four days of haggling, the second-longest meeting in the group’s history, it’s EUR 390bn of grants, EUR 360bn in low-interest loans. More significant than the amounts in my view is the fact that the money for the grants will be raised by selling EU bonds, the first liabilities of the region as a whole. The move crosses a major red line for the region and is an important first step toward fiscal union.

Nonetheless EUR was lower on the day on a trade-weighted basis, although it was higher vs USD and CHF, so I’m not sure this was indicative of EUR weakness – rather, I think it probably reflected the surprising surge in GBP, which rose for another day (up four of the lasts five sessions.

I say “surprising” because, I have to admit, I didn’t expect it. Furthermore, there doesn’t seem to be any news to justify it, except perhaps expectations that Friday’s preliminary UK purchasing managers’ indices will outpace the EU’s.. (Manufacturing PMI expectations: UK 52.0, EU 50.1; service-sector, UK 51.5, EU 51.0).

On the contrary, the Brexit news from yesterday is largely negative. UK Brexit negotiator David Frost and his EU counterpart, Michel Barnier, had dinner yesterday ahead of three days of talks, but according to the FT “there was little expectation of progress.” The paper said that EU officials think the talks are “going round in circles”, while the UK side still says “significant differences remain on a number of important issues.” Barnier will hold a press conference on Thursday; get ready for some fireworks, which could hit GBP. Another round of talks is scheduled for the week of 17 August, but Germany, which currently holds the rotating EU presidency, has indicated it will not start to concentrate on the trade talks until September. The real deadline for a deal is the EU summit in October.

One theory behind the recent strength of the pound has been that it may be due to Swiss National Bank (SNB) rebalancing its reserves. At the end of March, the SNB had 6.3% of its reserves in GBP. Assuming no change in the amount of GBP reserves – which of course is a big assumption – its holdings will have shrunk to 5.6%. To get that back up to 6.3% it would have to go out and buy GBP 4.56bn of sterling. That could be one reason why GBP is rising even against the background of bad news for Brexit (although I have no proof of this, I must admit). 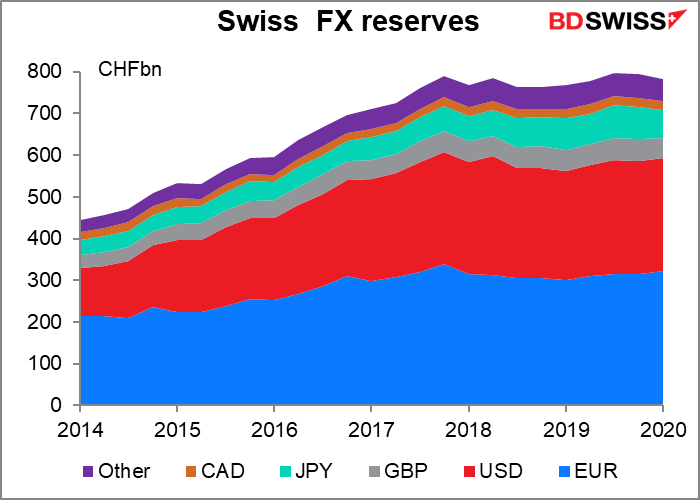 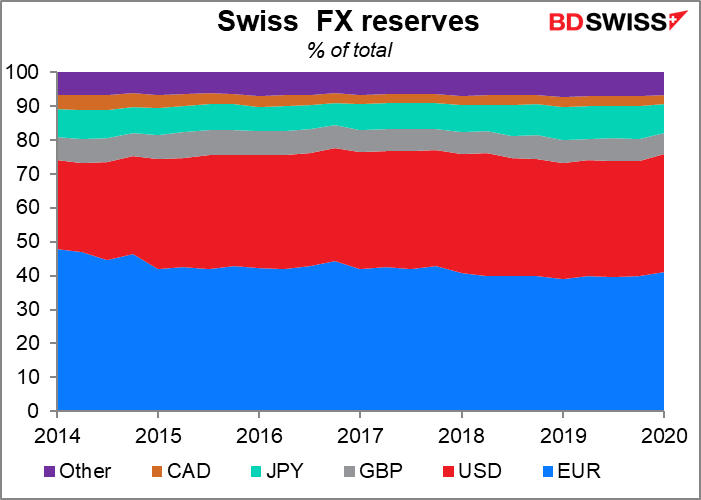 If true, this would suggest that once the rebalancing is over, demand for GBP may dry up and the currency could retrace its losses.

I remain bearish on the pound as Brexit approaches and more and more obstacles come to light. Just one obscure example: the head of the UK’s Timber Packaging and Pallet Confederation – you didn’t even know there was such a thing, did you? – warned that the country won’t have enough pallets to keep trade with the EU going.

In case you’re not familiar with pallets, they’re the (normally wooden) platforms that goods are stacked on so that they can be easily moved by forklift trucks. As many as 100mn of these pallets move between the UK and EU every year. 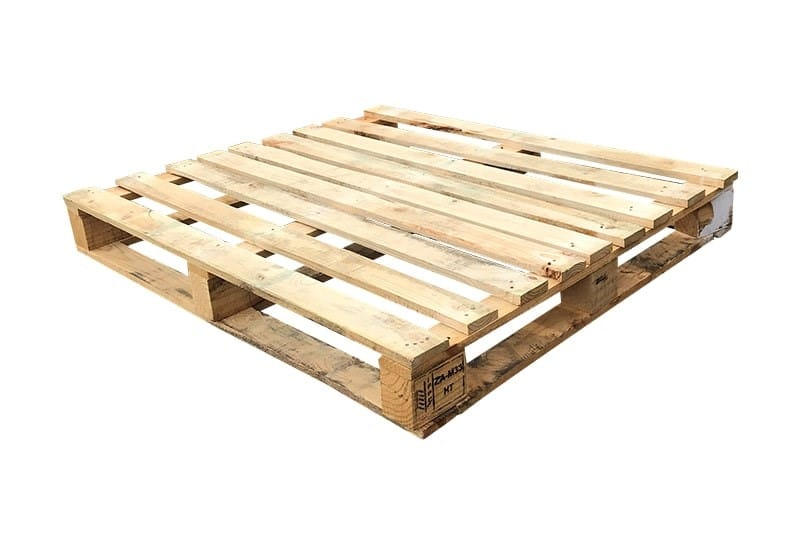 When Britian was part of the EU, there were no particular regulations governing pallets. But once the UK is out of the EU, they will have to comply with an international rule that requires them to be baked at high heat to prevent the spread of insects and disease. To make matters worse, the virus has disrupted installation of the kilns necessary to treat them. It seems unlikely that the industry will be able to treat 100mn of these pallets by the end of December. If the EU wants to get fussy, it will be able to use this issue to restrict trade between Britain and the Continent.

The big surprise Monday was silver. The metal surged over 5%. It’s up 69% from its 18 March low, vs a 22% rise in gold. This has brought the gold/silver ratio down from its 5,000-year high of 124 to a more reasonable 89.80. The key point is the many industrial uses of silver, including solar panels and electronics, which should benefit as economies recover. 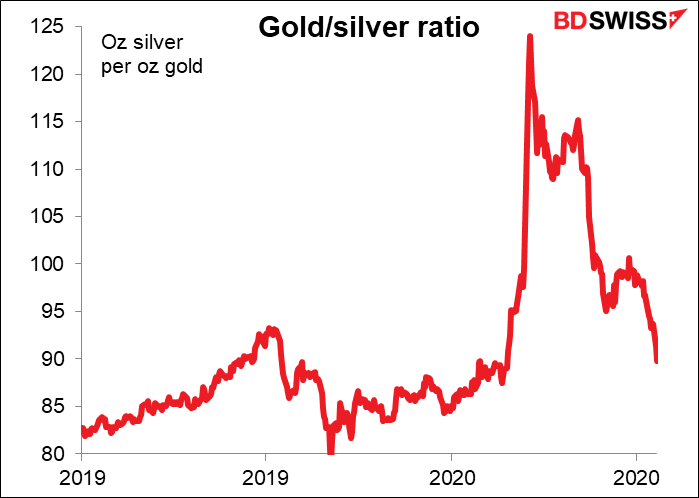 Over the last 1½ years, silver has had a beta to gold of 1.36x – that is, when gold moves up 1%, silver tends to move up 1.36%. We could even see some greater divergence between the two metals if the global economy recovers and industrial use of silver rises while safe-haven demand for gold wanes – although with interest rates set to stay at zero around the world indefinitely, I don’t think we have to worry about any major fall in the gold price. 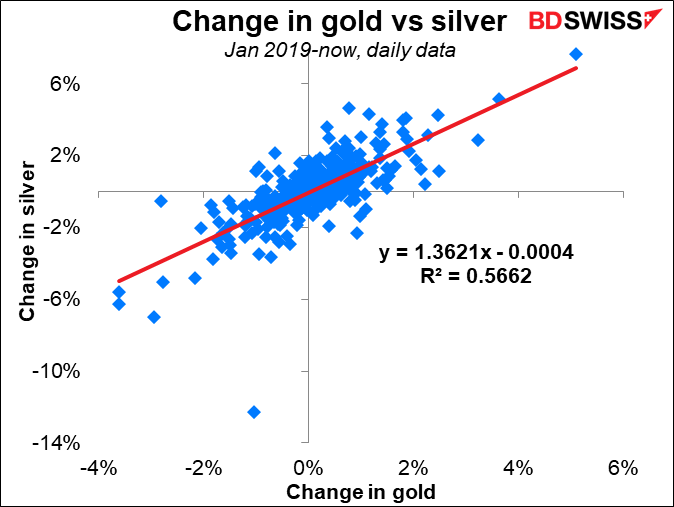 Almost as frightening as the virus: the most absurd, ridiculously unqualified person ever nominated for the Fed Board of Governors, Judy Shelton, may actually proceed to a vote in the Senate. The New York Times yesterday reported that “the Senate Banking Committee is expected to approve Ms. Shelton’s nomination on Tuesday, putting her one simple-majority vote in the full Senate away from confirmation…” Do you remember Judy Shelton? I thought she had withdrawn or been withdrawn. Really, nominating this person – who has compared the Fed to Gosplan and urged a return to the gold standard – is proof of Trump’s dementia, if more proof was needed. I do hope in the full Senate there are the necessary three Republicans willing to prevent this person from having 14 years to inflict her stupidity on the US economy. (The only consolation is that when she was the US representative to the European Bank for Reconstruction and Development, she missed most of the meetings – maybe she’d miss most of the FOMC meetings too.)

Speaking of which, I would recommend that anyone interested in Trump’s mental health read Does Donald Trump have Alzheimer’s? Answer: sure looks that way.

Tracking the US & global economy

Bloomberg is producing a dashboard of high-frequency data for the US economy. What it shows (if you can read it) is that while some measures have improved somewhat, the overall situation remains grim. Within the real economy, only housing is back into the green. And of course the virus count just keeps getting worse and worse.

Meanwhile, Bloomberg’s similar indices for the G10 economies confirms what we saw yesterday from the Bundesbank’s weekly activity index: growth continues to accelerate in the Eurozone while it’s starting to peak in the US. That should power EUR/USD higher over the medium term, in my view. 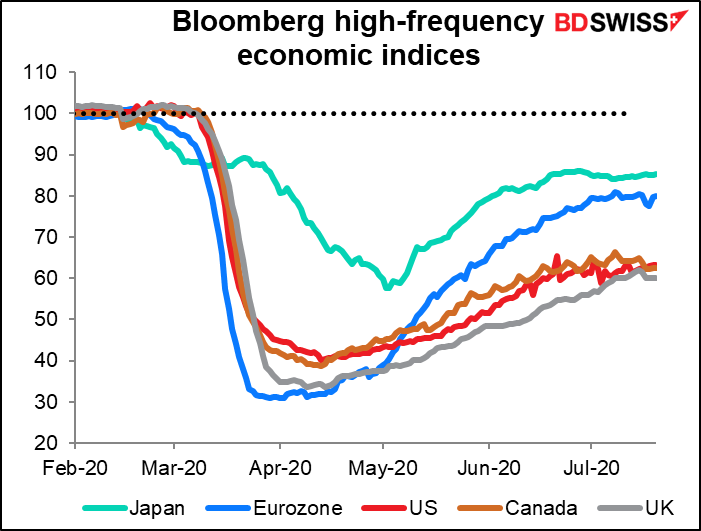 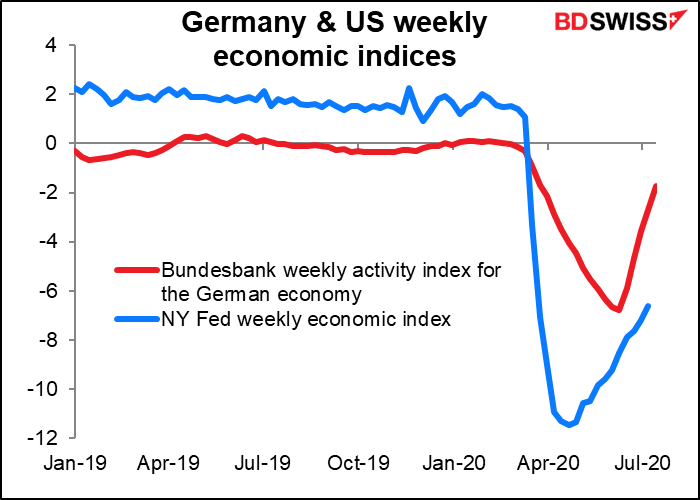 There isn’t much more going on today than there was yesterday. In fact, considering that the EU talks have finished, there’s a lot less.

Canadian retail sales are expected to be up sharply from April’s low level, but still nowhere near normal – still down 13% from the January & February average. It will take time to recover of course. I don’t think this will come as a shock to anyone. The Chicago Fed national activity index has gone off the rails. Before this year, there were 636 readings of this index (it started in 1967). Only 11 times did it reach an absolute value of 2 or more, and only one of those times (Jan 2009) did it hit 3 (-3.13). Do you remember what was happening in January 2009? I do and boy was it scary – the global economy was imploding faster than in November 1929 (I can show you the graphs if you’re interested). Now it’s forecast to go from 2.61 to 4.0, the latter number being a six standard-deviation event for this index. I’m not sure these numbers have much meaning in the greater scheme of things. 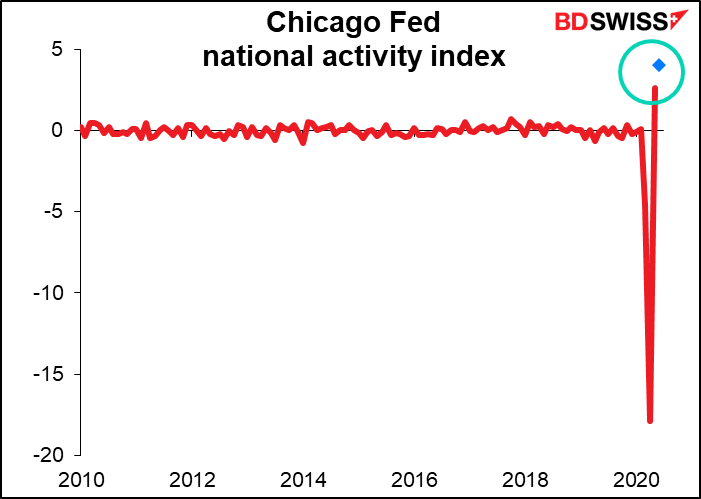 Ovenright, we get the Japan purchasing managers’ indices (PMIs). These are coming out on Wednesday because Thursday and Friday are holidays in Japan. There are no forecasts for the PMIs although they are closely watched – Bloomberg gives the manufacturing PMI a score of 90 and the service-sector PMI a score of 70. That’s pretty good. I’ve noticed though that the Japan PMIs don’t track GDP as well as some of the other PMIs do, which may be why there are no forecasts. 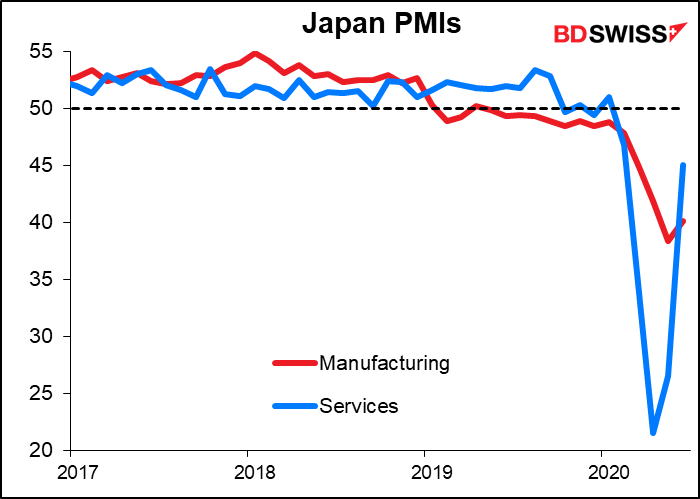 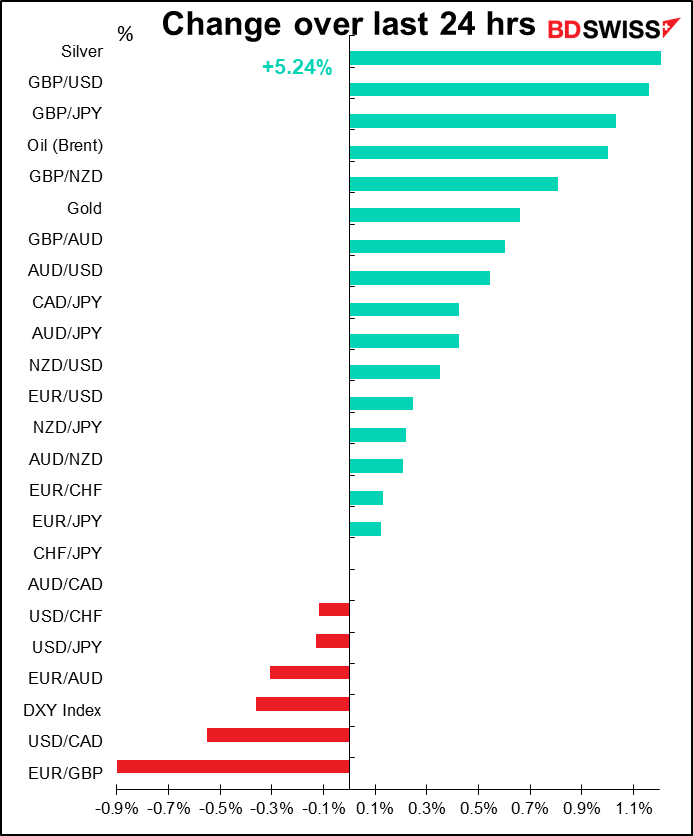