You are at:Home»MARKET PREVIEW»GBP Up, Safe-Havens Down as Confidence Grows; US New Home Sales 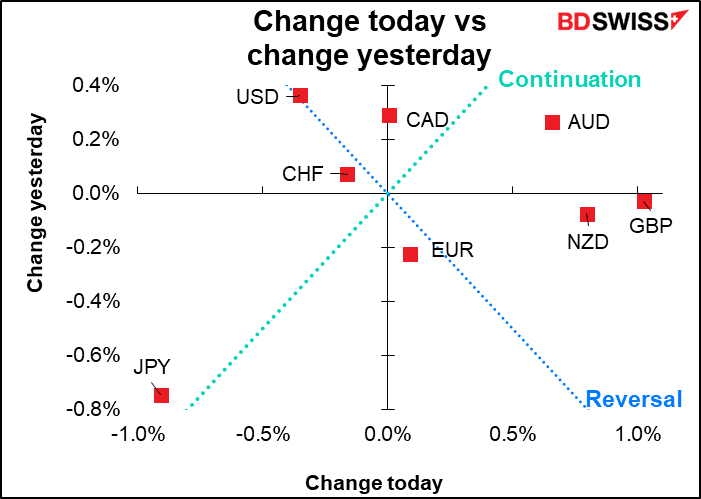 The rout in fixed income continued as more US Fed officials discussed their burning desire to send the US economy crashing into recession. St. Louis Fed President Bullard (V), the lone dissenter at last weeks’ Fed meeting who voted for a 50 bps hike, said he’d like to raise the fed funds rate to 3%, “a mildly restrictive level,” by the end of this year, with 50bp hikes well within the realm of possibility. Cleveland Fed President Mester (V), another known hawk, said she’d like to see the fed funds rate hit its neutral level of 2.5% this year “to follow with further rate increases next year,” echoing what Fed Chair Powell said Monday about tightening into restrictive territory. She also said she’d like “to front-load some of the needed increase earlier rather than later,” which implies some 50 bps hikes.

But I think the most significant comments were from the well-known dove, San Francisco Fed President Daly (NV). Although she’s not a voter this year, her views reflect the opposite extreme on the Federal Open Market Committee to Bullard and Mester. And even she said that inflation is “far too high” and warrants having interest rates “marching up to neutral” and perhaps higher – “tighten a little bit and restrict the economy to ensure that inflation comes back down.” If even the doves are convinced of the need to tighten, watch out!

Bond yields were higher across the curve in most major markets. Not shown: two-year yields, which would be most sensitive to prospective changes in monetary policy. The US 2-year Treasury yield rose another 5 bps to 2.16%, meaning it’s up about 75 bps this month alone.

The rise in the US 10-year breakeven is curious  – why should breakevens that far out be rising when Fed officials are talking about hiking aggressively? Probably due to rising energy prices. Oil rose further ahead of Thursday’s talks by NATO and European Union leaders about tightening up sanctions on Russia. White House National Security Adviser Jake Sullivan predicted that the meetings will result in further sanctions, although he wasn’t specific. Also, the Caspian Pipeline Consortium (CPC), a key Kaahk-Russian oil pipeline, may be forced to reduce shipments by as much as 1mn barrels a day due for up to two months due to storm damage.

The small rise in breakevens means a big increase in real interest rates, which will be a drag on growth. Note the particularly big increase in British real yields – this may well have been behind the surge in GBP today. The market is pricing in an increasing amount of tightening in the UK, with over 140bp of rate hikes now priced in before year-end.

Especially since the market is short GBP going into this morning’s UK consumer price index (which beat expectations – see table above) and the government’s Spring Statement (see below). 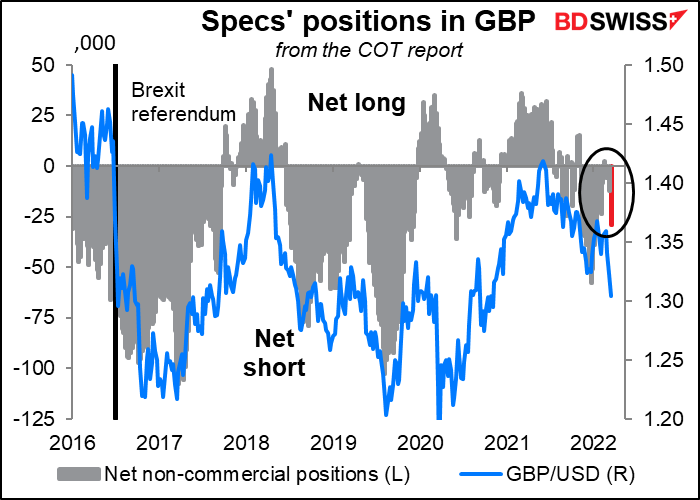 Bloomberg noted that this is the worst drawdown in fixed income since at least 1990. (They say “the worst on record,” but the record doesn’t include the 1980s, when the fed funds rate exceeded 14%.) They reported, “The Bloomberg Global Aggregate Index, a benchmark for government and corporate debt total returns, has fallen 11% from a high in January 2021. That’s the biggest decline from a peak in data stretching back to 1990, surpassing a 10.8% drawdown during the financial crisis in 2008.” 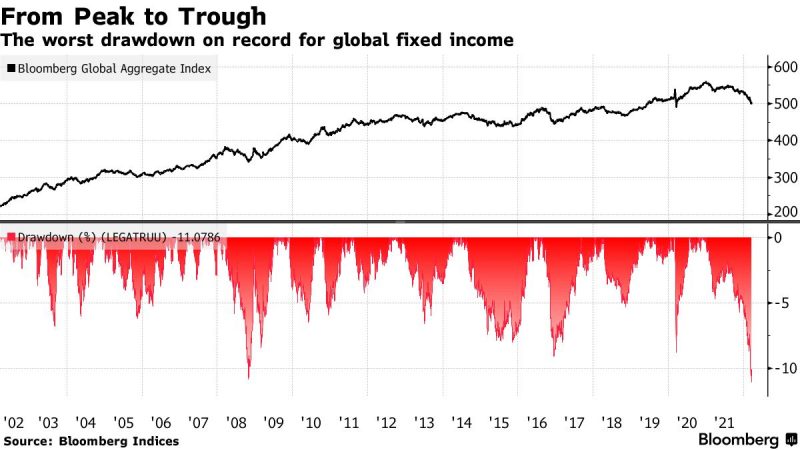 Rising global yields are deadly for JPY because of the Bank of Japan’s yield curve control (YCC) program, which guarantees that 10-year Japanese Government Bond yields will remain in a range of ±25 bps of 0.0%. So one end of the yield spread is effectively tethered while the other end rises. This means Japanese bond yields are becoming less and less attractive relative to most every other bond market. It’s liable to increase outflows from the country and thereby weaken the currency.

The main hope for JPY now would be a deterioration in global risk sentiment. But miracle of miracles – along with higher bond yields and higher energy prices we somehow also have higher stock markets! The markets this morning are a sea of green, with all major markets in positive territory. 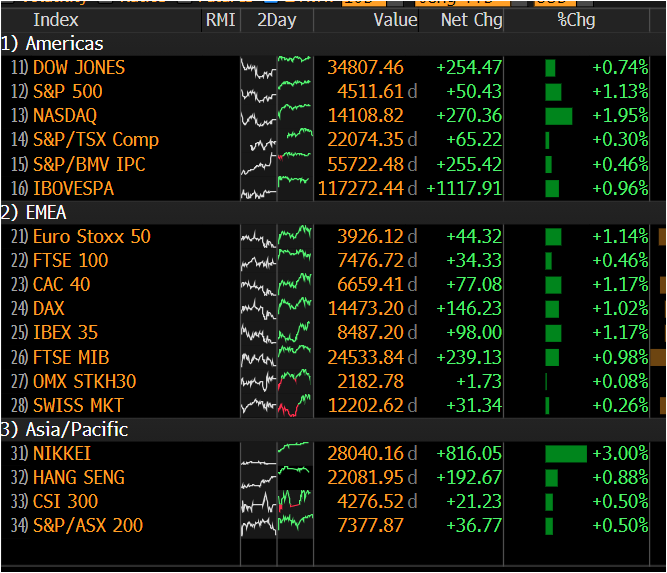 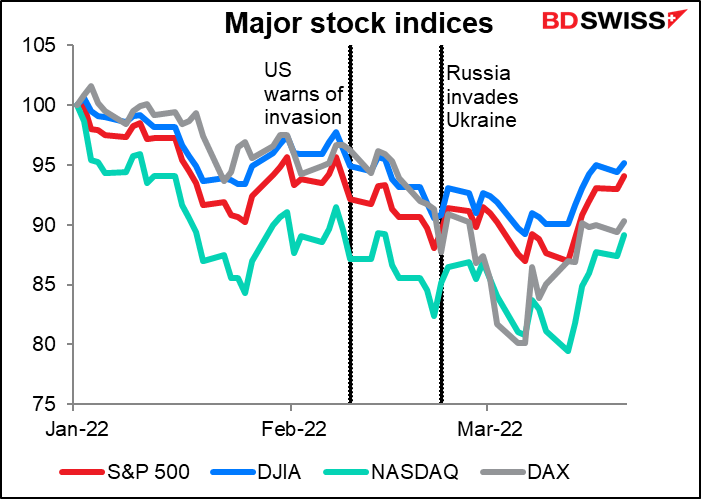 The increase in confidence came despite no major change in the Ukraine situation. However this may be a case of “no news is good news.” While the general consensus is that Russia is now stalled, one well-respected analyst is arguing convincingly that in this case, stalling = losing. There are indications that the number of Russian troops in Ukraine has fallen due to deaths, injuries, and captures, plus Ukranian forces have retaken some territory from the invaders. 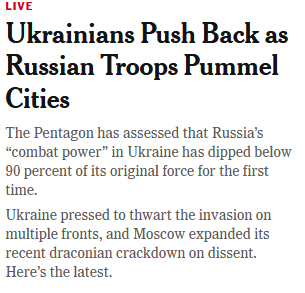 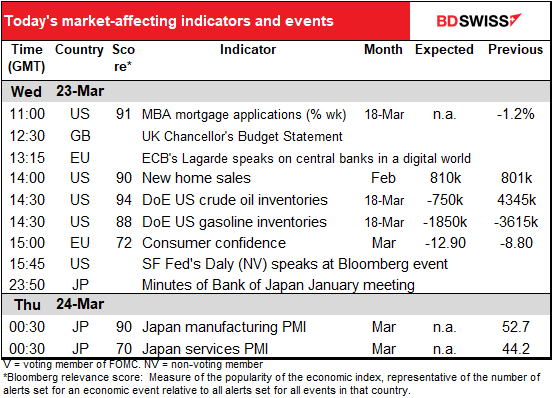 We discussed the UK CPI yesterday.

Mortgage Bankers’ Association (MBA) mortgage applications are going nicely so far this year. (Note that this isn’t the way they’re reported, but it’s a better way to present them.) 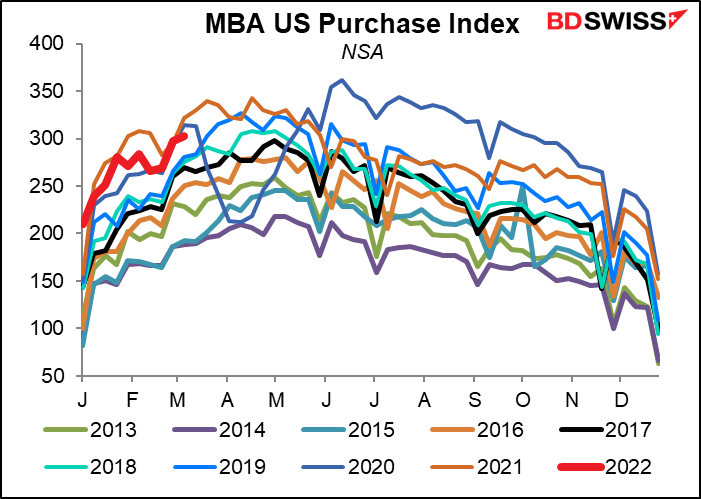 UK Chancellor of the Exchequer Rishi Sunak will announce the Spring Statement. The Spring Statement used to be the annual budget announcement, but then-Chancellor Philip Hammond changed that in 2016 and moved the Budget to the autumn, combining it with the Autumn Statement. However, the law still says that the Office for Budget Responsibility (OBR) has to produce two forecasts for borrowing and growth every year. So Hammond kept the Spring statement but used it just to announce the OBR forecasts and respond to them. The statement didn’t include any changes in tax or spending.

This year should be similar. Chancellor Rishi Sunak is unlikely to make many new spending proposals, if any. He may just tinker with existing budgets to make a few changes in four key areas: energy independence, defense, leveling-up, and the cost of living crisis (thanks to inflation). The Spring Statement is just the warm-up for the main event, the Autumn Budget, which should set out the Chancellor’s vision for “a new economy post-Covid… fit for a new age of optimism.”.

Chancellor Sunak will have some room for goodies though, as at the Autumn Budget on Oct. 27th the OBR forecast the government would borrow GBP 183bn in the fiscal year. But thanks to better-than-expected tax receipts, it’s now expected to borrow only about GBP 160bn. He therefore has GBP 23bn to play with. He could follow other European countries by cutting fuel duty to cushion the blow from soaring energy prices. He may also raise the thresholds before citizens have to pay income tax or national insurance contributions.

Generally speaking, a tighter monetary policy and a looser fiscal policy are usually a recipe for a stronger currency. Indications that he may loosen fiscal policy could be seen as good for growth and therefore positive for the pound.

US new home sales are forecast to be up 1.4% mom. But last week’s existing home sales fell 7.2% so I’m not clear why new home sales should be up. Having said that, going back to 2004 the two data series only move in the same direction 51% of the time, so knowing what one did gives you zero information about what the other might’ve done. I suppose with mortgage activity so high (see above), people have to be buying some homes, and if they’re not buying existing homes (because no one wants to sell, maybe?) they must be buying new homes. 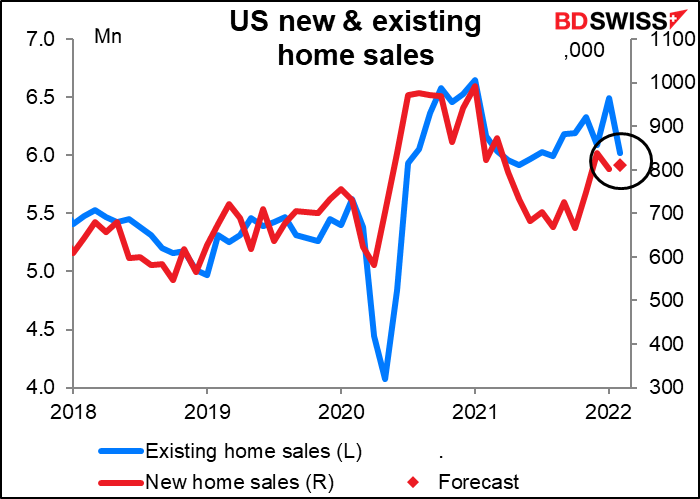 EU consumer confidence is expected to fall, which isn’t surprising considering how much the number of COIVD-19 cases rose in February, plus of course the war in Ukraine. In fact I’m surprised it isn’t expected to be even lower. I suppose that’s because people are happy that most of the restrictions have been lifted. 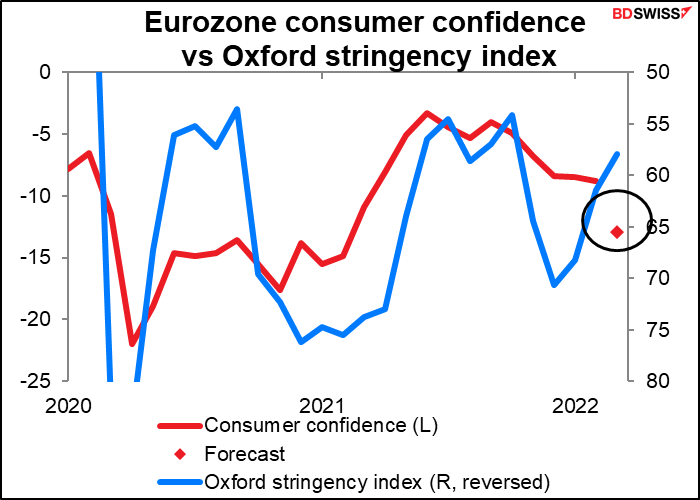 Then overnight we start with the preliminary purchasing managers’ indices (PMIs). But that’s largely a story for tomorrow, because there are no forecasts for the Japanese PMIs.and no one cares much about the Australian PMIs. 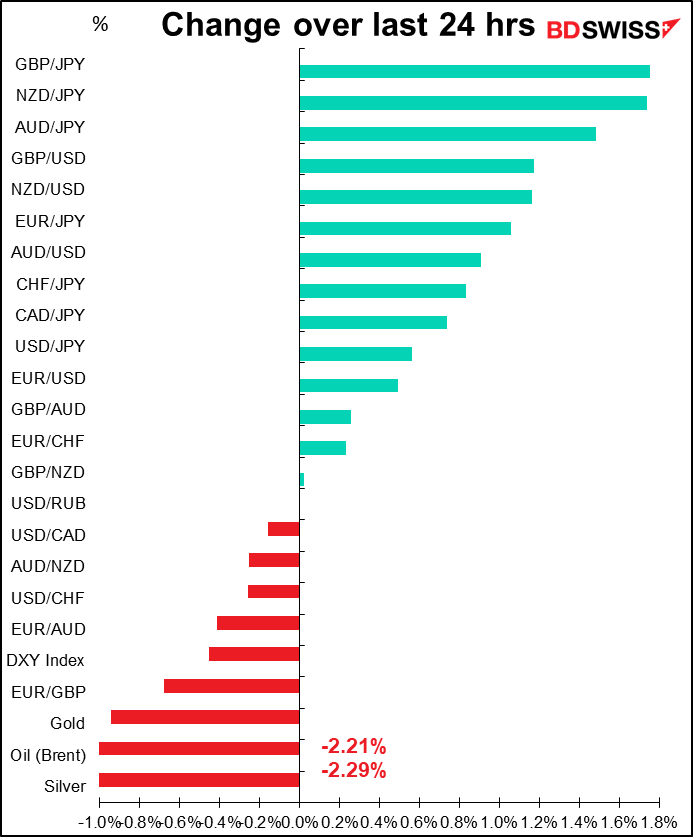