You are at:Home»MARKET PREVIEW»GBP up on Brexit hopes, USD down on “risk-on;” preliminary PMIs, FOMC 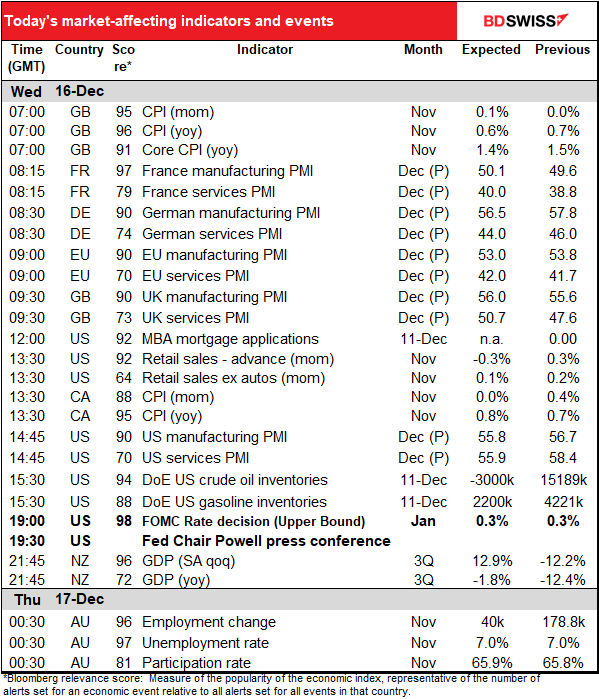 A very-very “risk-on” market as the US Congress inches towards an agreement on some form of fiscal rescue package. The leaders of the House and Senate talked to each other for the first time in ages. They’re now talking about a $748bn package that would include $300bn in aid to small businesses and $180bn for unemployment benefits, as well as help for education, healthcare, and certain struggling sectors of the economy, such as airlines. The two most contentious provisions throughout the talks — liability protection for companies and aid to state and local governments — were stripped out of the proposal to facilitate a solution. However, the package also does not contain direct payments to individuals, which could prove an obstacle to gaining approval.

The positive mood was also bolstered by news that the US Food and Drug Administration (FDA) had found that Moderna’s vaccine is highly protective against Covid-19. The positive review most likely ensures that the FDA will grant emergency authorization to a second coronavirus vaccine this week. After four consecutive days of losses, the S&P 500 was up 1.29% to 3.694.62, not far off last week’s record high of 3,702.25, while the NASDAQ rose 1.25%.

The risk-on sentiment pushed the dollar down, as one might expect nowadays, but as a result I’m at a loss to explain why EUR was down too and JPY up. EUR weakness may well have been the counterpart to GBP strength (see below), also there was an unusual amount of activity in EUR/CHF, according to CLS, but I can see no specific news that would’ve caused JPY to strengthen. On the contrary, Tuesday was a “gotobi” date, a date divisible by 5, when Japanese corporations usually settle their accounts. This often causes demand for dollars in Tokyo.

Meanwhile, GBP is soaring on expectations that there will be some kind of breakthrough this week. I haven’t been able to find any specific news, but people are taking heart from something that hasn’t happened – Jacob Rees-Mogg, leader of the House of Commons, has not yet moved a “recess motion” to allow Parliament to shut down for its Christmas break from tomorrow. The likely reason behind this is so that MPs can be available to debate the result next week and potentially pass the necessary legislation in case there is a deal, although they might be asked to approve it retrospectively after it had gone into effect.

The press is reporting various optimistic comments from various people. EU negotiator Barnier, previously a pessimist, said he saw a pathway to a deal, while the UK government reportedly told Conservative MPs that a solution to the key “level playing field” problem has been found that gives both parties protection from unfair competition

Elsewhere, Australia will challenge China at the WTO over China’s imposition of tariffs on its barley exports. We saw yesterday how China was in effect cutting off imports of coal from Australia. Today’s move could cause further tension between the already-tense countries and is therefore potentially negative for AUD.

Big day today! The biggest event is the US central bank meeting (see below).

Before that though we start off with the preliminary purchasing managers’ indices (PMIs) from the major industrial countries. These will give us the first reading on which way the global economy is headed. Hint:  have you ever seen a turtle on its back?

The Japan figures are already out. While manufacturing improved a bit (although it remains below 50), services fell back by about the same amount. 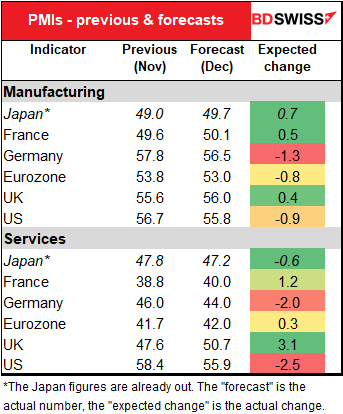 That’s also the story we get from the Bloomberg alternative high-frequency data. It shows that while growth in emerging economies is still rising, the recovery in the developed world paused in mid-October and activity has been stagnant at best since then. 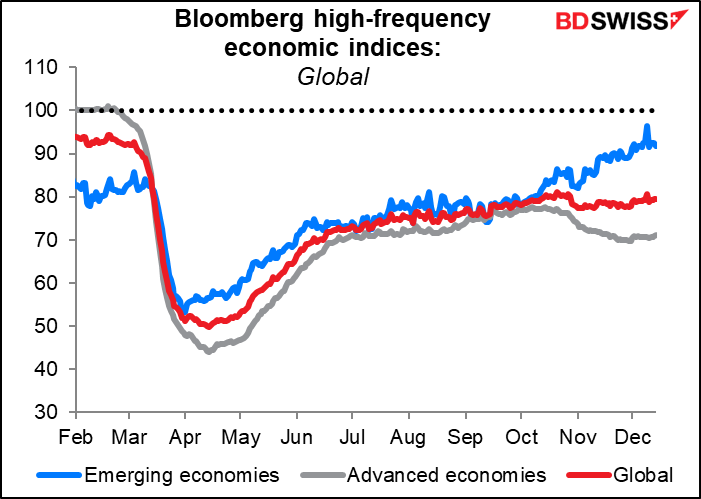 We can see a similar pattern if we look at the high-frequency data on only those countries/regions that are releasing their data today. Japan has plateaued, the Eurozone and UK have emerged from their November dip (but are likely to slow again in December as lockdowns take effect), and the US peaked in October and has been slowing gradually ever since. 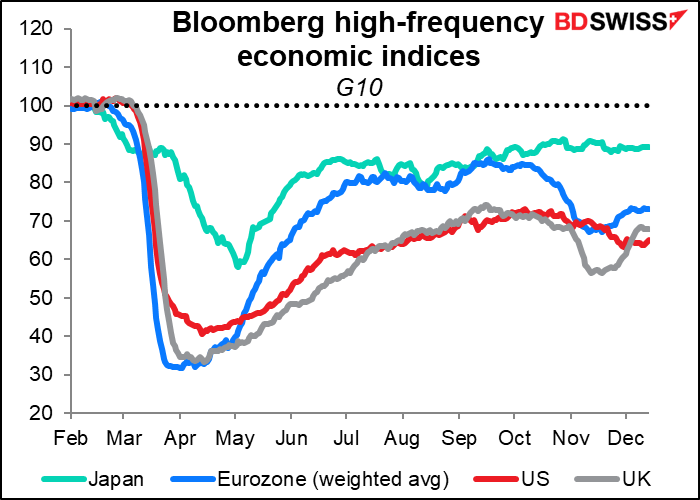 Then comes probably the most important monthly US statistic this week, US retail sales. With some 70% of the US economy accounted for by personal consumption, this is a key indicator of the health of the US economy. Bottom line:  sales are expected to be bad: the first mom decline since the plunge in April. 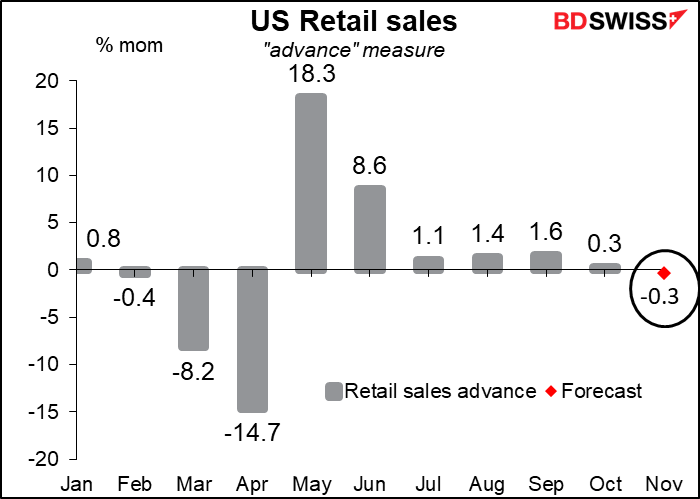 Nonetheless, sales on this forecast sales would still be 4.4% above pre-pandemic levels, but as I’ve mentioned dozens of times, if a few million people lose their unemployment benefits at the end of December, they’re not going to be shopping for anything and sales will fall off a cliff. 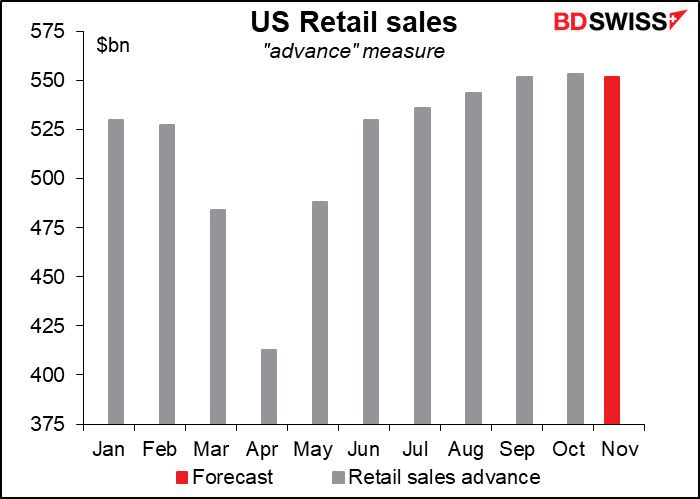 Canada’s consumer price index (CPI) is expected to be one tic higher on a yoy basis, but does it matter? Central banks aren’t running monetary policy in reaction to inflation anymore, they’re worried about growth and supporting the government’s fiscal policy. Higher inflation won’t get them to tighten for the time being and lower inflation or even deflation won’t get them to loosen further. Their “reaction function,” as it’s called, is turned off at this point. Maybe it matters to the bond market a bit and thereby to the FX market, but otherwise I don’t think CPI figures will have a major market impact until the virus is under control and we’re back to talking about the business cycle, rather than the infection cycle. 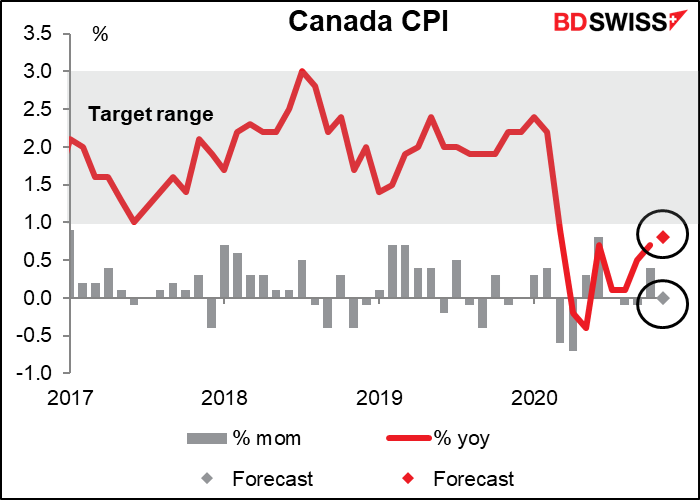 The US Dept of Energy (DoE) figures for US oil inventories are expected to decline after last week’s tremendous rise, the largest since April. However, last night’s figure from the American Petroleum Institute (API) showed yet another rise in inventories of 1.97mn bbl. 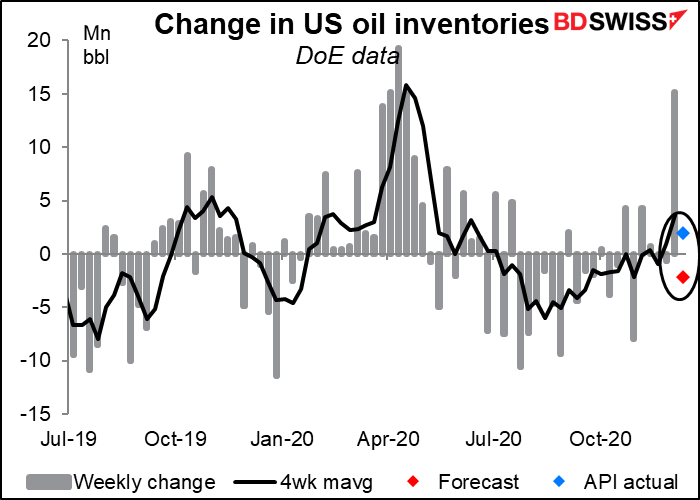 The two series differ week-to-week, but over time most of the differences even out. The DoE series has been “lumpier” than the API recently. 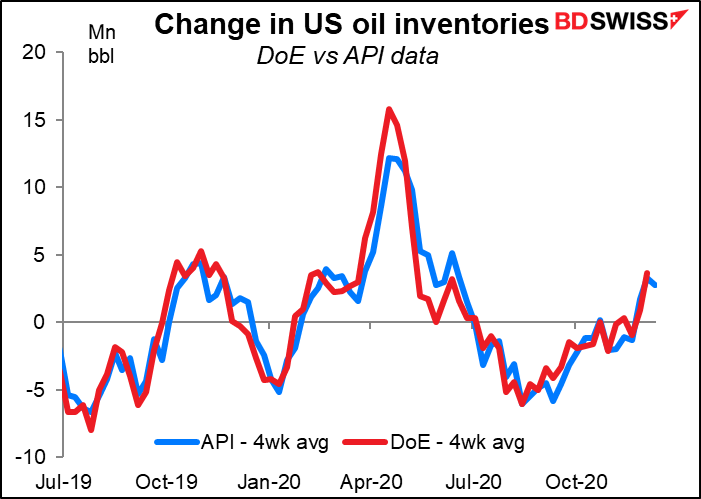 Then we get to the big deal of the day:  the meeting of the US Federal Reserve’s rate-setting body, the Federal Open Market Committee (FOMC). I’ve written an extensive piece giving my expectations for the meeting – you can read it here. In short, I think there are going to be two points of interest: 1) changes to their forward guidance with regards to asset purchases, and 2) changes in their forecasts for the economy as reflected in the quarterly Summary of Economic Projections (SEP). I expect that the average forecasts for interest rates will remain unchanged, i.e. the consensus will be that rates won’t start rising until 2024 at the earliest, although there may be a few more dots forecasting lift-off by end-2023 (last time it was only four out of 17).

The impact on the market depends on how specific the new guidance is. Does it change the market’s estimates for when “lift-off” might come? The more clarity the Fed provides on when it might start tapering down its asset purchases, the more the market is likely to focus on this eventuality. One of the main assumptions underlying the market’s USD-negative consensus is that the Fed is likely to remain on hold for the foreseeable future. If they do anything to change that assumption, investors’ incentives to sell dollars or their willingness to use USD as a funding currency could be diminished. That might cause the dollar to strengthen. (See the full article for more details)

Overnight, New Zealand announces its Q3 GDP, the last of the industrial countries to do so. It’s expected to be up a fairly healthy 12.9% qoq, amost (but not quite) erasing the impact of the Q2 plunge. 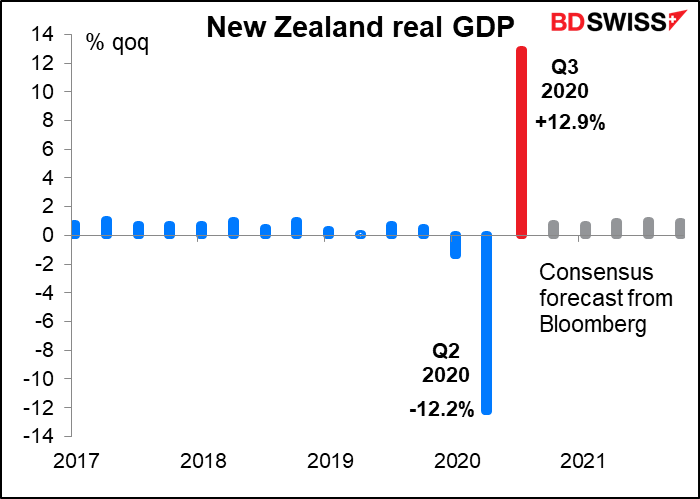 Compared with the other commodity currency countries, New Zealand is expected to rebound faster. We have to see if the recovery continues and obviates the Reserve Bank of New Zealand’s threat of negative interest rates and FX intervention. That would help the NZD to outperform the other two commodity currencies. 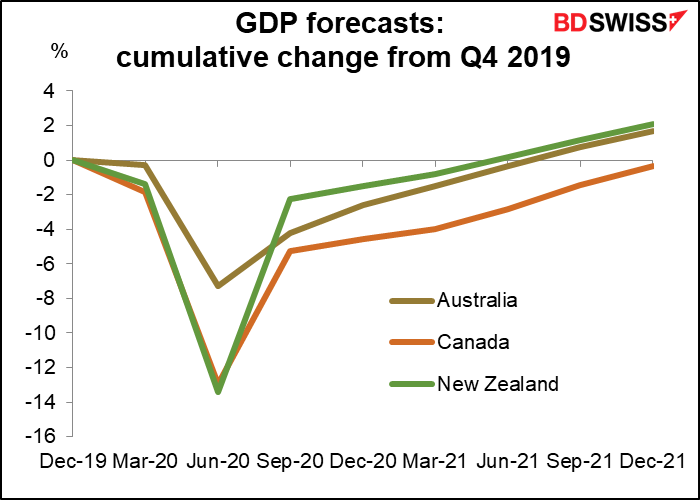 Finally, Australia announces its employment data. This is probably the main focus of monetary policy nowadays, not inflation, as the Reserve Bank of Australia (RBA) has said “The Board views addressing the high rate of unemployment as an important national priority.” A small rise in employment and no further fall in unemployment are not encouraging but at the same time neither are they enough to spur the RBA onto further measures. I therefore think that this data should be neutral for AUD. 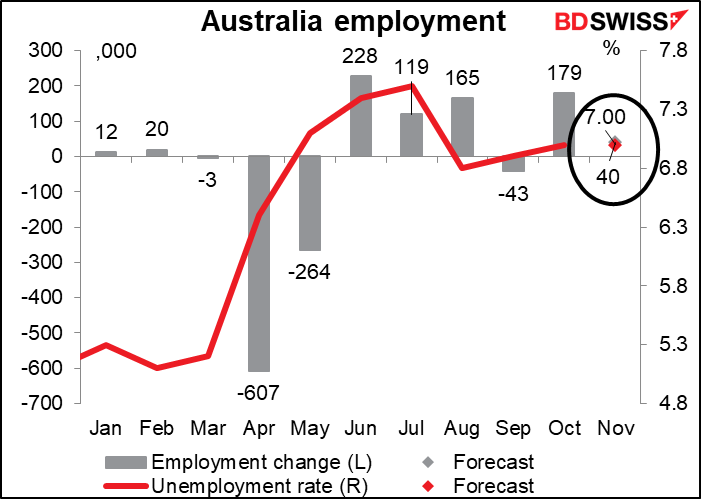 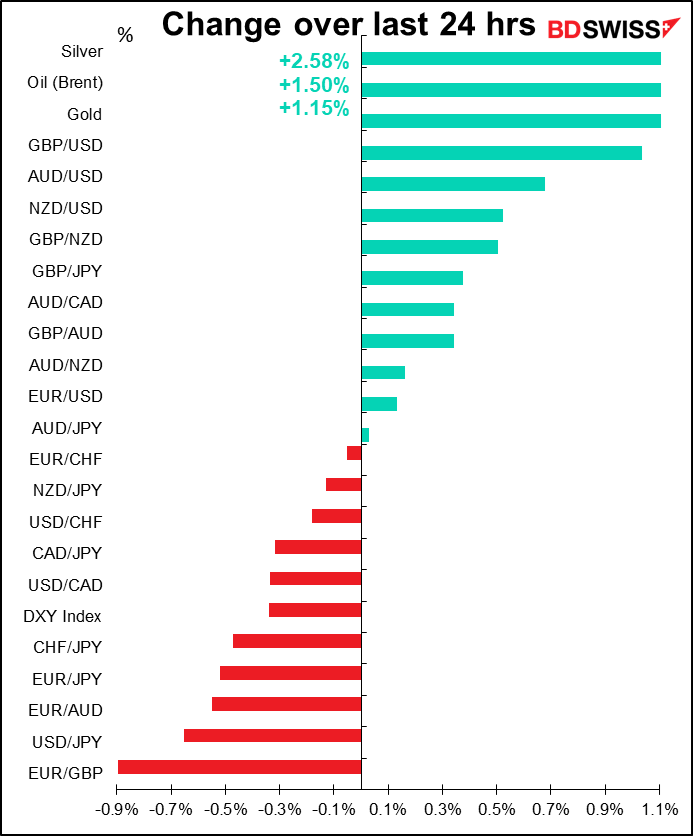