You are at:Home»MARKET PREVIEW»GBP up on Brexit hopes; German CPI, US Presidential “Debate” 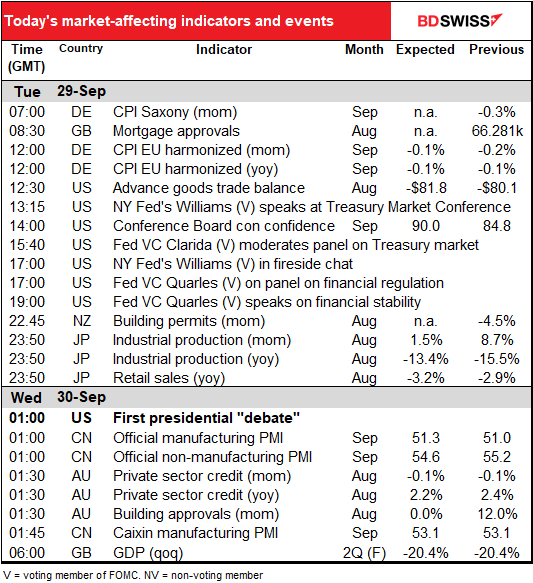 I was out yesterday so my graphs today show the change from the NY close, not from 24 hours ago, which is what I usually show. That explains in part the small changes. But in fact when I compare today’s rates with Friday morning’s rates, there isn’t much difference anyway. It looks like there wasn’t that much action Friday or yesterday. Surprising, coming into the end of the month like this. Usually there’s a lot of end-month rebalancing as equity fund managers rebalance their portfolios (eg, if the UK stock market has underperformed, they’d have to buy more UK stocks to bring the UK back up to the required weight in their portfolio. That would force them to buy GBP, not to mention speculators front-running the expected demand.) Monday was the last day for trades to settle in September.

We started the week with a solid “risk-on” tone. In Europe, the STOXX 600 (+2.2%) and the DAX (+3.2%) both had their best day since June, while in the US, the S&P 500 finished up +1.6% following four consecutive weekly declines. The rally was broad-based, with every sector and more than 93% of the index gaining on the day. Banks outperformed both in Europe and the US. That’s a particular relief in Europe, where the bank index last week hit a 32-year low. 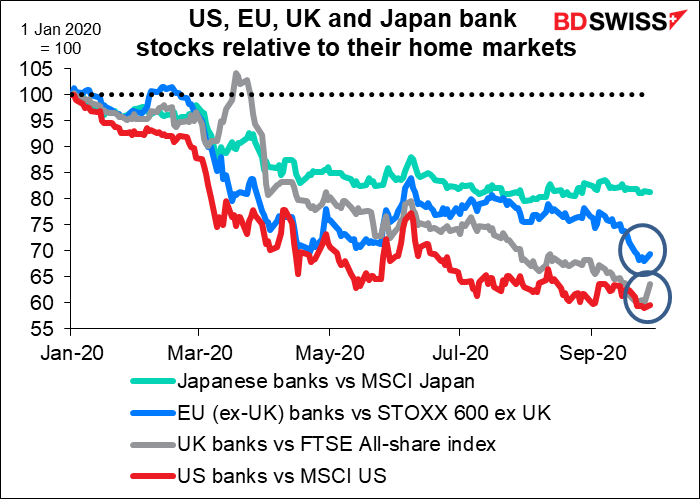 GBP was the big winner, first on an optimistic story in the Financial Times entitled “Brexit teams race against clock as trade talks enter final straight.” The article said that there are “Tentative signs of progress as negotiations enter crucial phase.” Three days of talks begin in Brussels today. They’re trying to see if there’s enough progress to justify more intensive talks among senior advisors beginning on the week of 4 October that would prepare some agreement to be taken up at an EU summit on 15-16 October, which is probably the last chance.

Then there was a story in The Times of London this morning saying that “European negotiators have indicated for the first time that they are prepared to start writing a joint legal text of a trade agreement with the UK, before fresh talks begin today.” The article said that “Brussels is understood to have dropped its demand for the two sides to reach a broad agreement on all the outstanding areas of dispute before drafting a final agreement.” That’s a significant change for the EU.

Positioning in GBP is relatively neutral nowadays, so I think a decision either way would move the market. 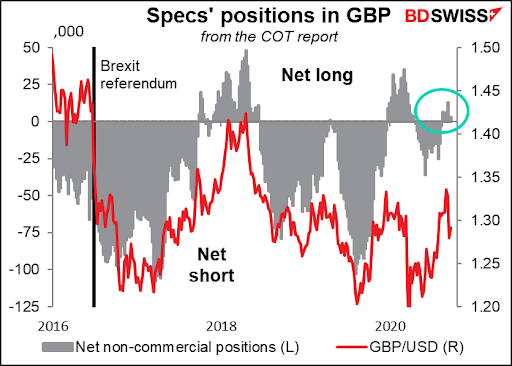 We can see though that the market is getting less pessimistic about GBP. The risk reversals have all been showing less demand for protection against a GBP decline recently. Nonetheless they are still biased to the downside for GBP, in contrast to the moderately positive GBP positioning. Perhaps it’s speculators long GBP who are hedging their bets? This suggests to me that at this point, a positive outcome for the Brexit talks would still be more of a surprise to the market than their failure. 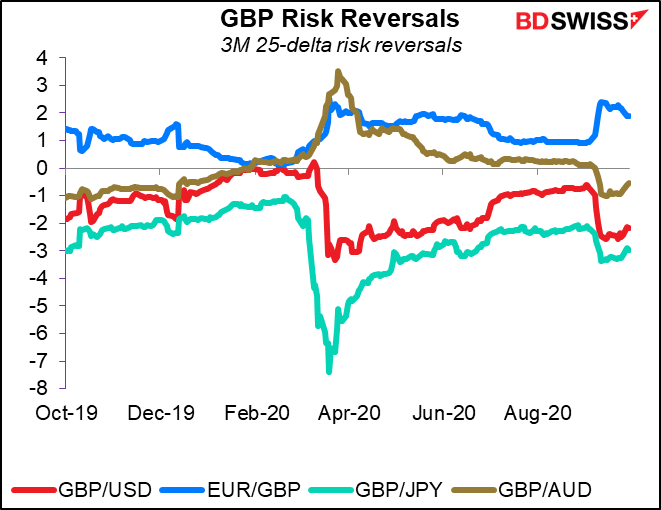 Elsewhere, EUR was little changed despite a slight increase in the ECB’s concern about the euro. In her prepared comments to the Committee on Economic and Monetary Affairs of the European Parliament, ECB President Lagarde repeated what’s become the ECB’s standard line recently, that “the Governing Council will carefully assess all incoming information, including developments in the exchange rate, with regard to its implications for the medium-term inflation outlook.” However in the Q&A, she said about the exchange rate, “We monitor those movements very closely in order to adjust our measures as a result of inflation projections in short and medium term.”  “Very closely” feels a bit stronger than “carefully assess.”

We may learn more tomorrow about whether this is a real shift in emphasis when Lagarde and ECB Chief Economist Lane speak at the annual “ECB and its Watchers” conference.

Today’s market
The big event today, as far as I’m concerned, will be the first debate between Biden and Trump. I discussed this in some detail in my weekly comment, which you can read here. The topics will be “The Trump and Biden Records,” “The Supreme Court,” “Covid-19,” “The Economy,” “Race and Violence in our Cities,” and “The Integrity of the Election.” Each segment will last about 15 minutes. The candidates will have two minutes to respond after the moderator opens each segment with a question, followed by discussion.
Despite the high-sounding topics, don’t expect a deep discussion of major issues. Trump’s dementia is too far advanced for him to develop ideas and support them with reasoned argument. Rather than argue policy, his aim in this debate will be to rattle Biden and make the debate into a personal mud-slinging match, where his talents for bullying, name-calling and shameless slander can beat someone with principles. Moreover everyone knows and accepts that Trump is a loudmouth, whereas Biden is trying to establish his reputation as “the adult in the room.”

Look for Trump to try to make a big deal out of Biden’s son Hunter and his business in Ukraine, never mind that Trump’s children are making 10s of millions of dollars a year off their private businesses while working in the White House. Biden is being coached on how to keep his cool under personal attacks, but we may still see some, shall we say, animated discussions.

I doubt if the debates will be market-affecting. It’s widely assumed Biden will win the election, although there is some doubt about what Trump will do if (when) he loses – there are a stunning number of legal ways that Trump and his allies could steal the election. My hope is that the debates will persuade the few (if any) undecided voters left in the country that Biden isn’t the Che Guevara look-alike that the Republicans make him out to be and that they decide to vote for him, which could provide the early and overwhelming landslide that would be impossible to ignore. 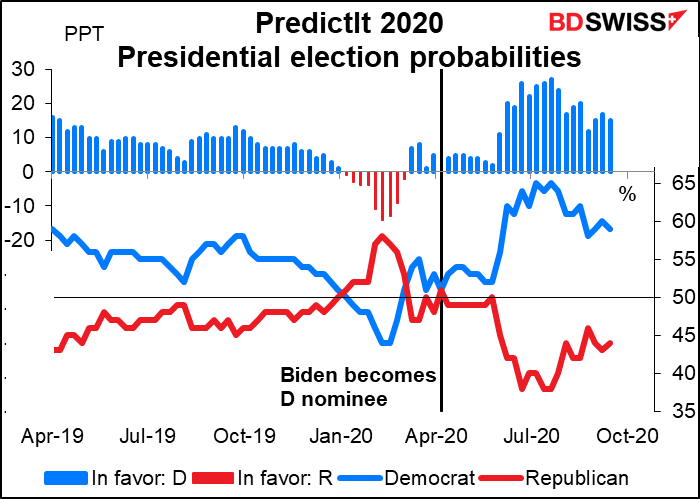 Lots of speeches today: Now that the major central bank meetings are over and bankers are free to talk, we’re discovering one of the ways in which the virus has changed the financial world. Previously, officials would have to travel to a conference in order to make a speech there. That forced them to be selective about which conferences they would attend. But now that most conferences are virtual, they can participate from the comfort of their own office. This seems to be encouraging people to speak more often. It’s not uncommon now for officials to speak at two conferences a day. I have seen this before occasionally, and once I even saw someone appear at two conferences in different countries on the same day (after all, it only takes an hour to fly or three hours by train from Brussels to Frankfurt) but nothing like I’m seeing now.

Today, NY Fed President Williams and Vice Chair Quarles are both speaking twice. Williams will first speak at the New York Fed’s 2020 US Treasury Market Conference webinar, then later in the day take part in a “fireside chat” during a virtual event hosted by the Policy Advisory Board at the Fisher Center for Real Estate & Urban Economics. Quarles will speak on a panel on financial regulation sponsored by Harvard Law School and Program on International Financial Systems, then speak on financial stability at a webinar hosted by the University of Maryland. Also on the schedule, Vice Chair Clarida will moderate a panel discussion on “Future Considerations for Treasury Market Resilience” at the aforementioned NY Fed Treasury market conference. (And Philadelphia Fed President Harker will participate in a conference on machine learning, but I don’t think that’s relevant for the markets so I didn’t include it in the schedule.)

It’s also noticeable that many of these conferences are now open to the public. For example, I doubt if the average Joe (or Marshall) would’ve been able to attend today’s US Treasury market conference previously, but now anyone who wants can watch it on the website (participation is still by invitation only). We were all able to watch Fed Chair Powell and others deliver their speeches at the so-called Jackson Hole Symposium this year. Will the increase in exposure lead to greater transparency or just greater cacophony? I hope the former.

The day starts with UK mortgage approvals. They’re expected to rebound sharply to 71.3k, which would be 8.3% higher than the average for last year – a full rebound and then some.

It’s easy to see why. If we assume that there “should” be about 66k mortgages every month (the average for 2019), then the UK “lost” 142k mortgages during March-June. People are now making up for lost time. House sales around the world are preternaturally strong as people like the friend I mentioned the other day discover that they can work from home and so decide to get out of the city and move somewhere nicer & cheaper. The UK is no exception. 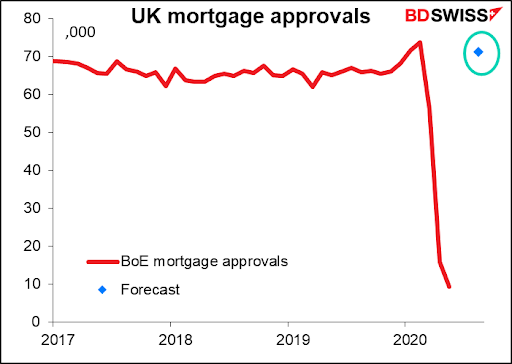 German inflation is expected to be the same on both a mom and yoy basis: -0.1% This second month in deflation shouldn’t cause any panic, however. At the last ECB meeting, ECB President Lagarde predicted that “headline inflation is likely to remain negative over the coming months before turning positive again in early 2021.” A continuation of inflation modestly below zero will therefore be expected although not welcome. 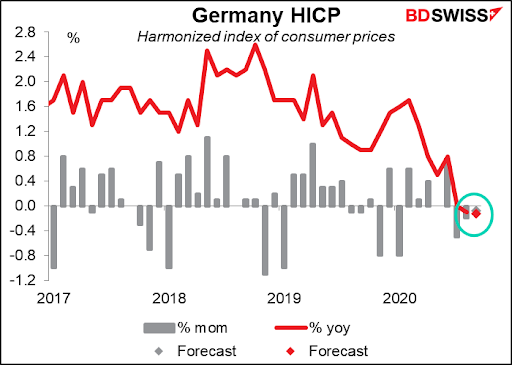 The US merchandise trade deficit, which hit a record $80.1bn in July, is expected to hit an even record-er $81.8bn in August. Nobody cares about this though. This indicator gets one of the smallest Bloomberg “attention scores” I’ve ever seen: 7.1. 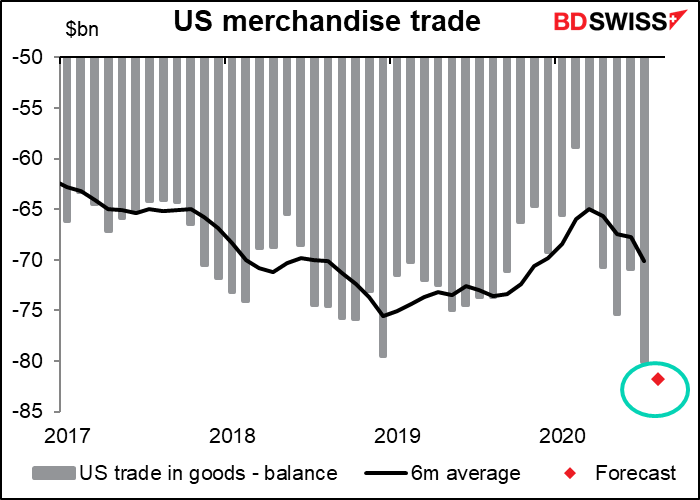 Be that as it may, the trend in both merchandise and services trade is negative for the dollar. 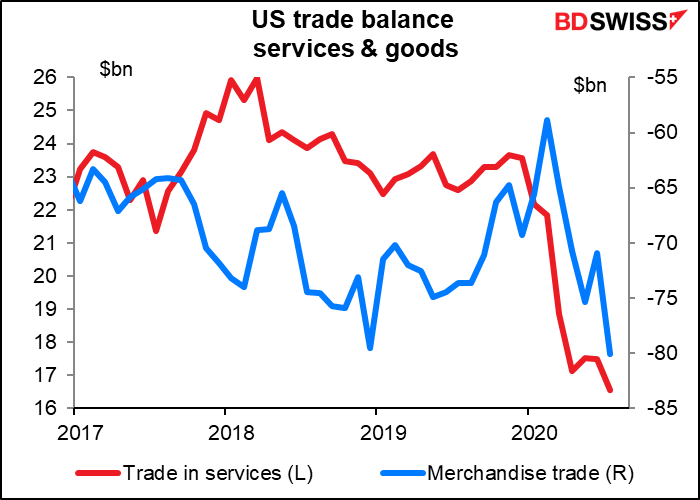 The Conference Board consumer confidence index is expected to rise a bit, which would be in line with last week’s U of M consumer sentiment index. 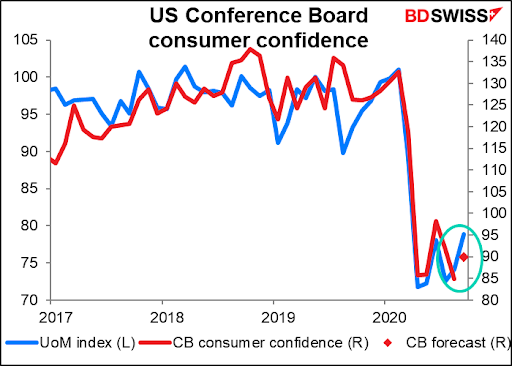 The basic movement of consumer confidence is fairly consistent among the major developed countries – mostly it’s trending sideways. Japanese sentiment is lagging, but that predates the pandemic, which only made things worse. 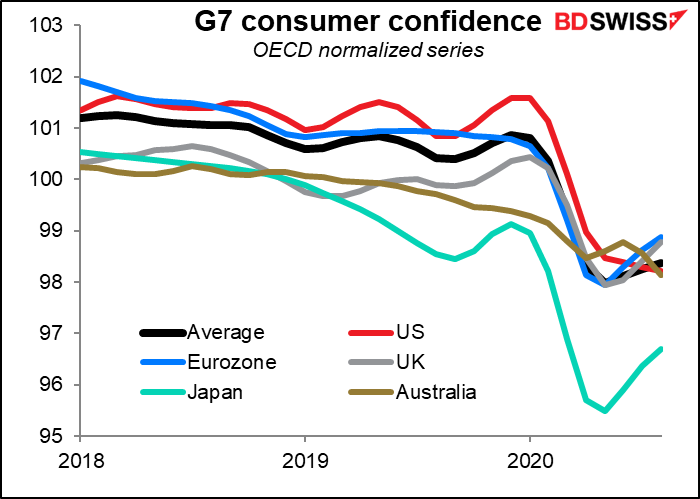 Overnight, Japan releases its industrial production data. It’s expected to tell the familiar story that we’re seeing globally of a slowing recovery:  after a spurt in July, output is expected to grow only slightly in August. 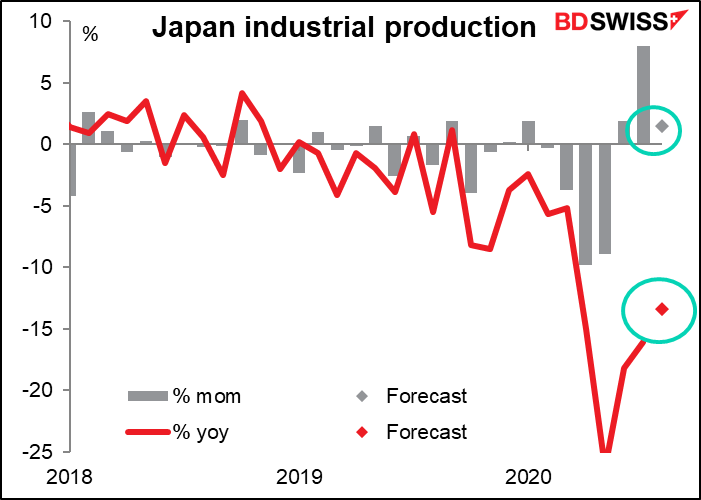 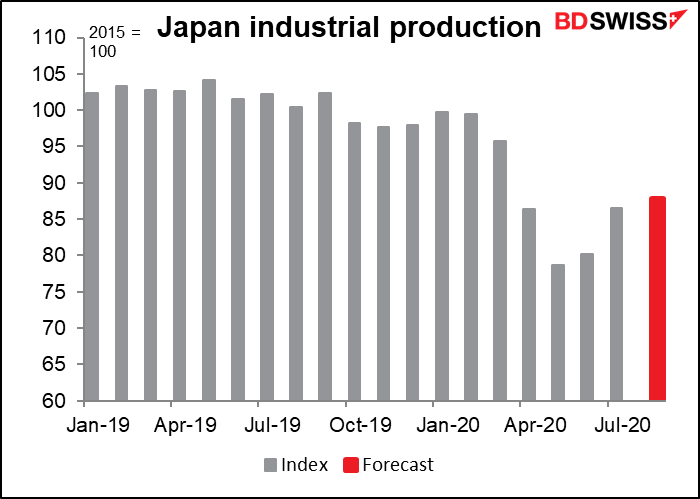 Japan’s retail sales are expected to be up a modest 2.0% mom but still down 3.2% yoy. The expected change would leave them down slightly (-0.9%) from pre-pandemic levels. Here too Japan isn’t doing so great. Other countries have seen a post-lockdown rebound that has pushed sales above pre-pandemic levels, at least temporarily. In the US for example August retail sales were 2.4% above the January & February average despite the enormous level of unemployment. 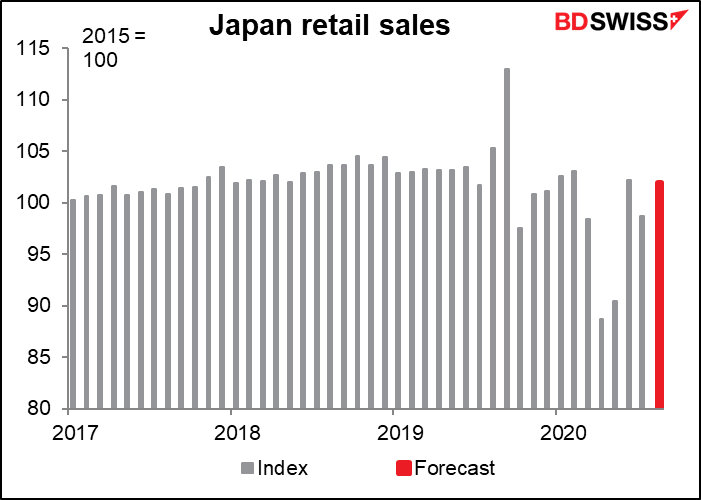 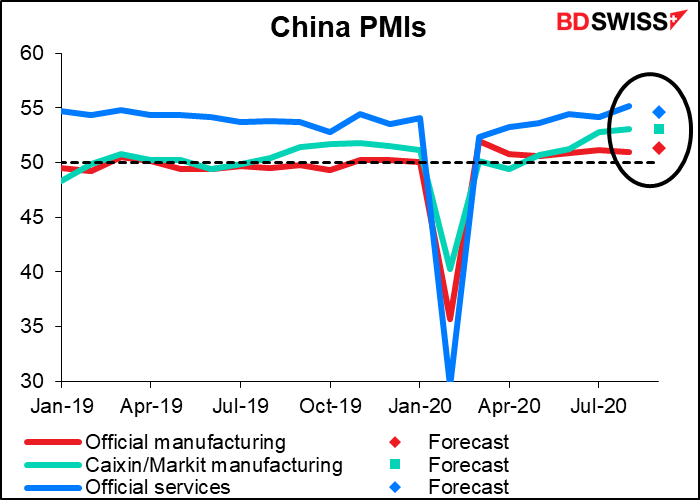 Australian building approvals are expected to be unchanged after the surprising leap in July. The surge is probably due to demand that built up during the lockdown period. There’s a lot of uncertainty around the figure, though. On the one hand, the Federal government’s HomeBuilder scheme, which offers grants for people building or renovating their houses, may continue boost the figures. On the other hand, the state of Victoria moved back into lockdown during the month. This is a closely watched figure for Australia, with 93% of the Bloomberg subscribers who set alarms for Australian indicators setting an alarm for this (vs only 78% for the private credit data). 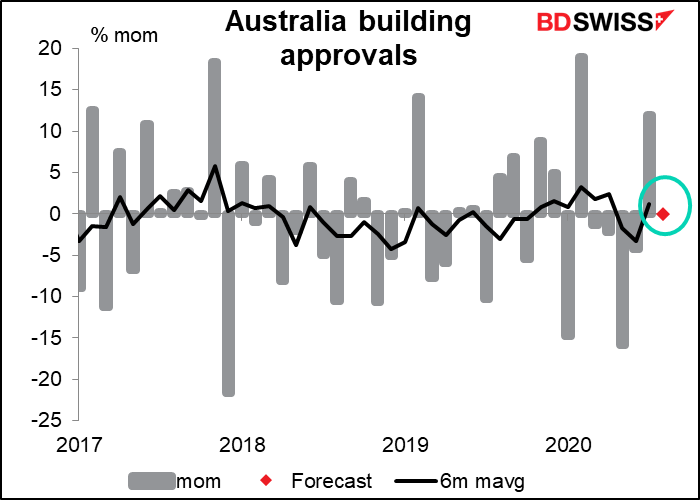 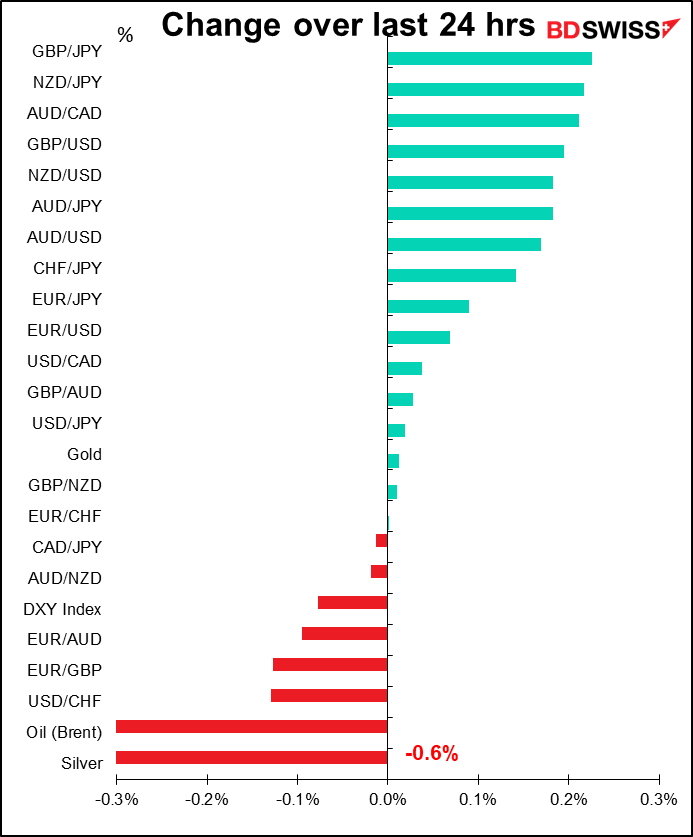