You are at:Home»MARKET PREVIEW»GBP Plunges on Brexit Fears, AUD up on Optimistic RBA; US Factory Orders 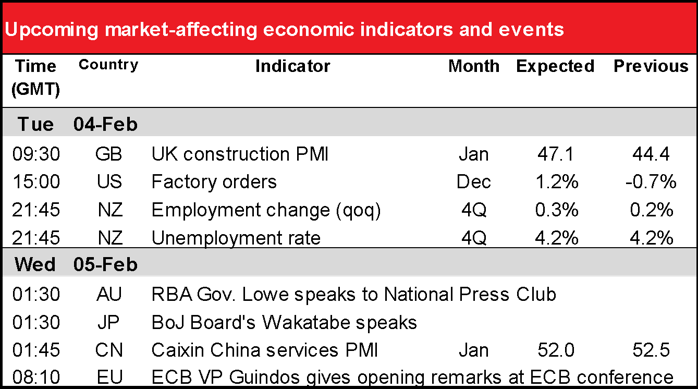 The “Brexit honeymoon” period didn’t last long! The first full working day after Brexit and the market finally realized what a disaster this year’s negotiations are likely to be. The EU’s top Brexit negotiator, Barnier, and UK PM Johnson both gave speeches setting out their expectations for the negotiations. Barnier said the EU is prepared to offer a very ambitious arrangement, but the UK must agree to a “level playing field.” Johnson on the other hand was adamant that the UK shouldn’t have to agree to the EU’s rules, but he seeks a comprehensive trade agreement nonetheless – a position that is referred to in Britain as “cakeism,” from the phrase “have your cake and eat it too.”

What surprised me was not these people’s positions, but that such statements would apparently come as a surprise or disappointment to the market. Both sides have held these same positions consistently for some time. There’s no change at all here. What does seem to have changed is that people are now realizing that 31 January was the start of Brexit, not the end. Now comes the hard part. Of course it may just be that these are their starting negotiating positions and someone – probably Johnson – will eventually fold, just like he capitulated over the question of a border within the UK.

The Reserve Bank of Australia (RBA) kept rates on hold and issued what was to me a surprisingly optimistic statement. Given what’s going on in China – Australia’s main market – I would’ve thought they’d be a lot more worried. Instead they said, “The outlook for the global economy remains reasonable” and that growth this year was likely to be “a little stronger” than last year. The coronavirus they said was “another source of uncertainty” but that it was “too early to determine how long-lasting the impact will be.” Contrast that with the Bank of Canada’s recent statement; the best they could say was that “The global economy is showing signs of stabilization” but that “there remains a high degree of uncertainty.” And that was before the coronavirus became a big issue!

The announcement changed people’s view of the likelihood of a rate cut in the near term, but not much change in the longer-term outlook – in fact the odds of a rate cut by April went up slightly. While AUD rebounded a bit on this news today, it remains hostage to any developments – good or bad – with the coronavirus.

We’ll learn more about the RBA’s views overnight when RBA Gov. Lowe gives a speech on “The Year Ahead” to the National Press Club. 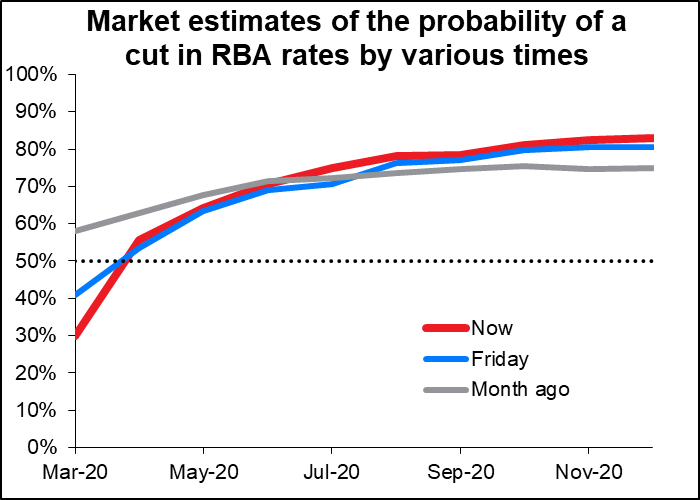 So far, the developments with the virus look bad to me, but that’s just me. The US stock market bounced back yesterday and all Asian markets are up today, so apparently a lot of people are feeling more optimistic. I hope they’re right! But other markets are showing considerable pessimism. The Baltic dry freight index, a measure of the cost of chartering ships to move bulk commodities, and the dirty tanker index, for chartering ships to move crude oil, have both plummeted. That suggests shippers don’t expect economic activity to recover any time soon 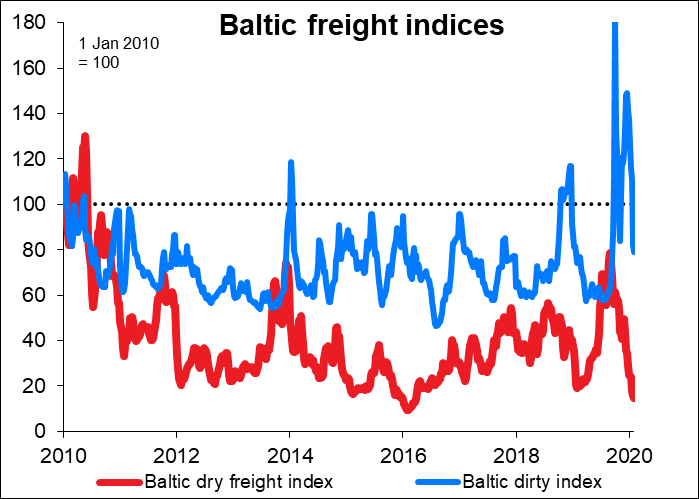 In the oil market, prices have come down not just for oil for near-term delivery but all across the futures curve, suggesting that oil companies don’t see demand coming back any time soon. The fact that futures prices are lower than near-term prices (backwardation) is also an indication of an expected fall in demand. 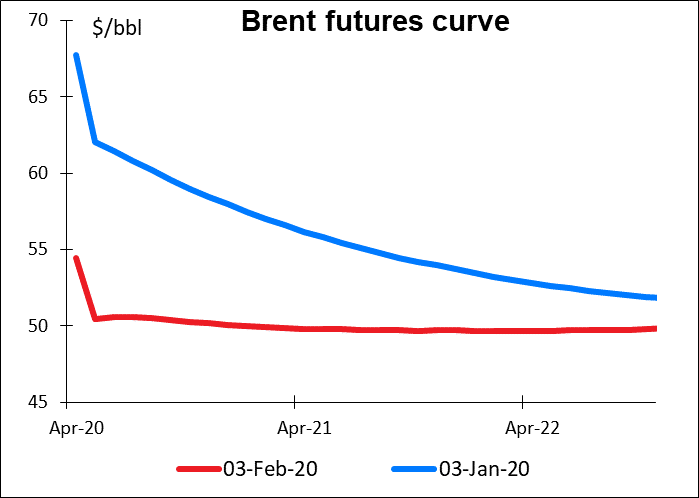 Looking at the response in these other markets, I’d use this rebound in risk sentiment in general and AUD in particular to put on new shorts or get out of longs.

Only second-tier data on the schedule today.

The day starts with the UK construction purchasing managers’ index (PMI). This is not as closely watched as the other two UK PMIs, and probably even less now that the manufacturing & services PMIs come out in both preliminary and final versions. But people do seem to pay attention to it. It’s expected to be up sharply, which could boost GBP a bit. 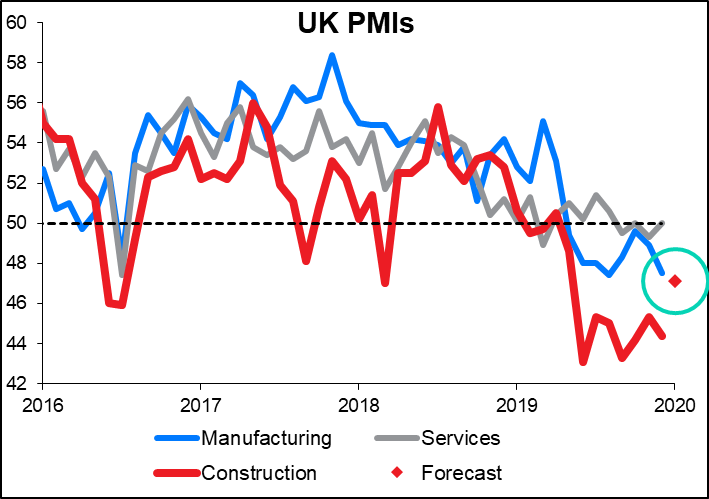 After that it’s pretty quiet until US factory orders come out. But since they’re largely a function of the (previously announced) durable goods figures – an r2 of 0.91 is about as good as it gets in economics — they’re not a biggie. Maybe the figure will be USD positive if it shows a healthy above-trend rise, as is expected – but maybe not. 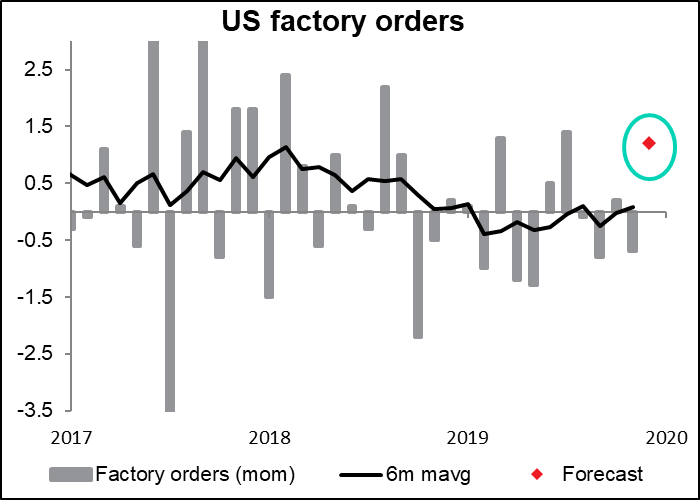 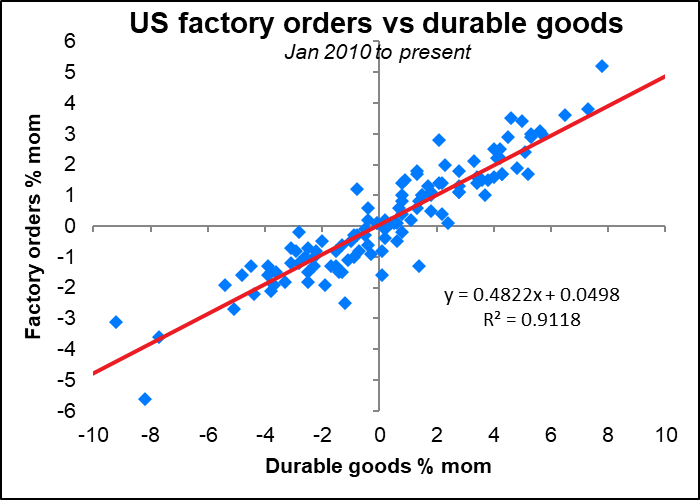 Then you can go back to sleep until New Zealand comes out with its employment data overnight. This is a key data point for the Reserve Bank of New Zealand (RBNZ), which like the Fed has a “dual mandate” – it’s required to set monetary policy “with the goals of maintaining a stable general level of prices over the medium term ans supporting maximum sustainable employment.” That level isn’t spelled out, but at the last RBNZ meeting, in November, Monetary Policy Committee members opined that “employment remains close to its maximum sustainable level…” If employment is up and the unemployment rate is unchanged, I don’t see any reason why this assessment would change. In any event, expectations for a change in RBNZ rates this year are pretty low – the market gives it only a 48% chance of a rate change by November – and this news isn’t going to put any pressure on them to cut. NZD positive. 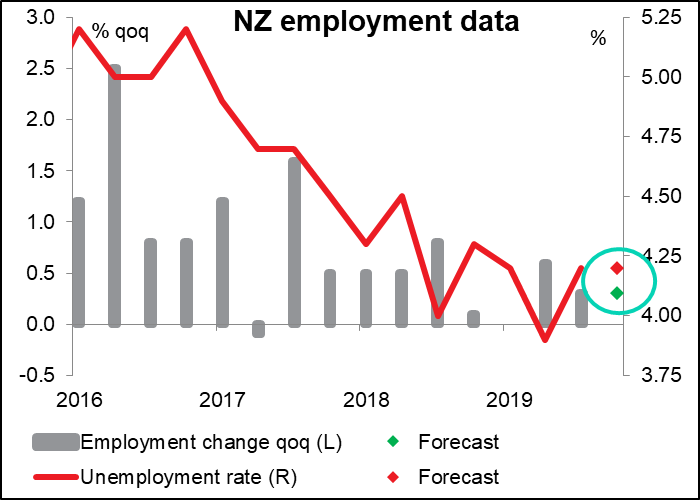 In Japan there’s a speech by Bank of Japan Deputy Gov. and Policy Board member Mr. Wakatabe. Normally these anodyne speeches are like something out of National Lampoon’s Animal House (“Knowledge is Good”) and can be ignored by all but the most diligent and dedicated of Japan-watchers. However, recently there’s been more dissent on the BoJ Board and there might be some changes afoot. For example, In last week’s “Summary of Opinions,” a sort of digest of the main points made by participants in the Board meetings, one member noted that the ECB and the Fed are reviewing their frameworks for monetary policy and suggested that policy in Japan may also warrant review. (Speakers are not identified.) Of course that could just be the redoubtable Mr. Kataoka, who has steadfastly urged a looser monetary policy. But it could reflect a wider view that after 25 years of no success, maybe it’s time to try something else. In October, Mr. Wakatabe expressed the shocking view that he’d like it if the BoJ could reach its 2% inflation target and exit from its negative rate policy. Let’s see if he can come up with anything more interesting this time. 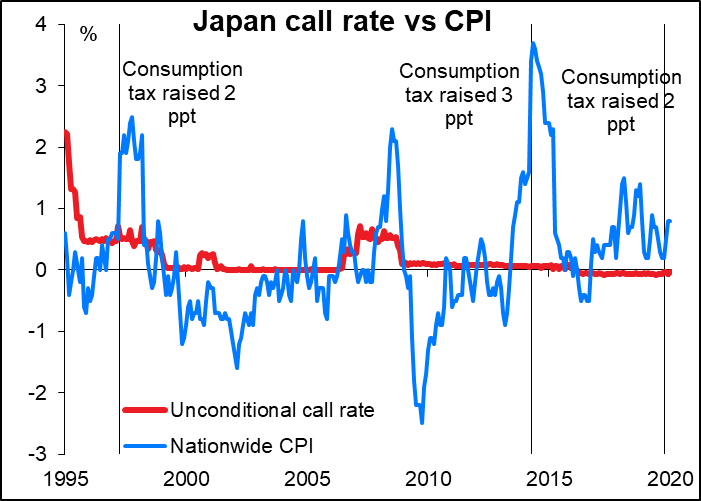 The Caixin Markit services PMI for January is expected to be down a bit, but no one cares at this point – let’s wait to see what happens with the February one after the whole country was put on lock-down. 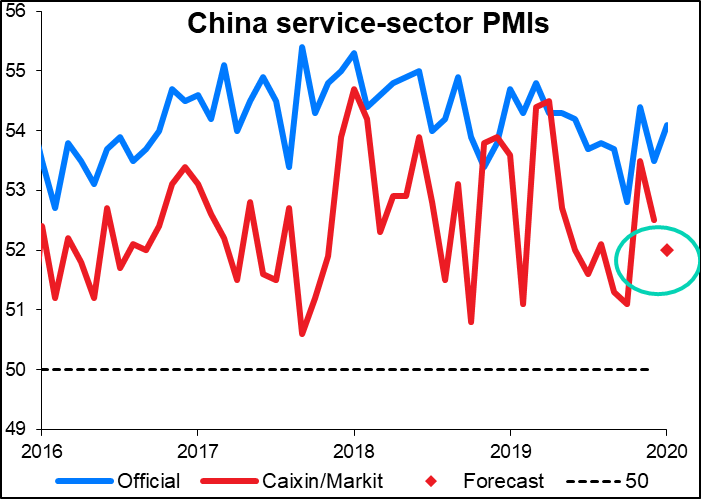 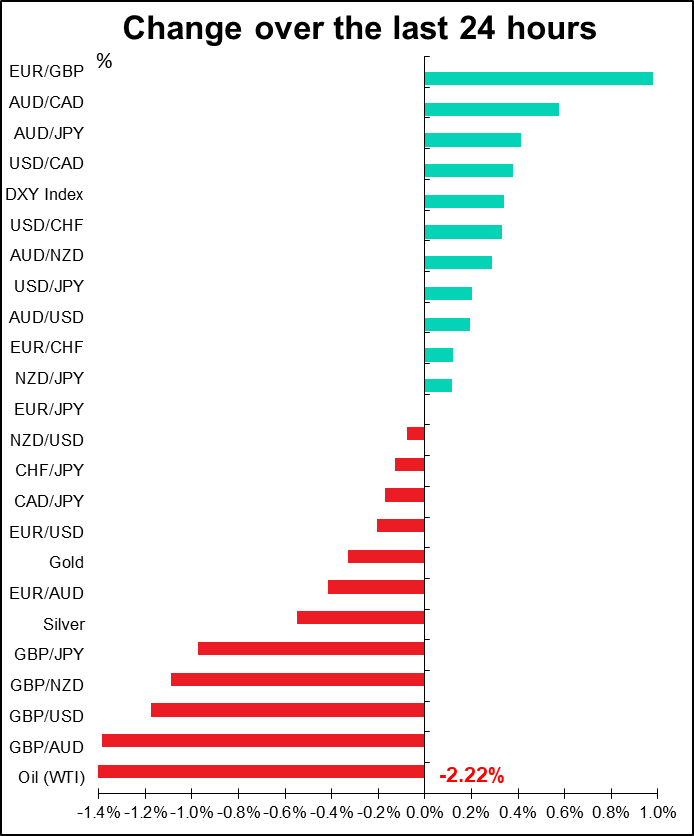