You are at:Home»MARKET PREVIEW»GBP Moves up, EUR Moves down; Powell Performance, RBNZ Meeting 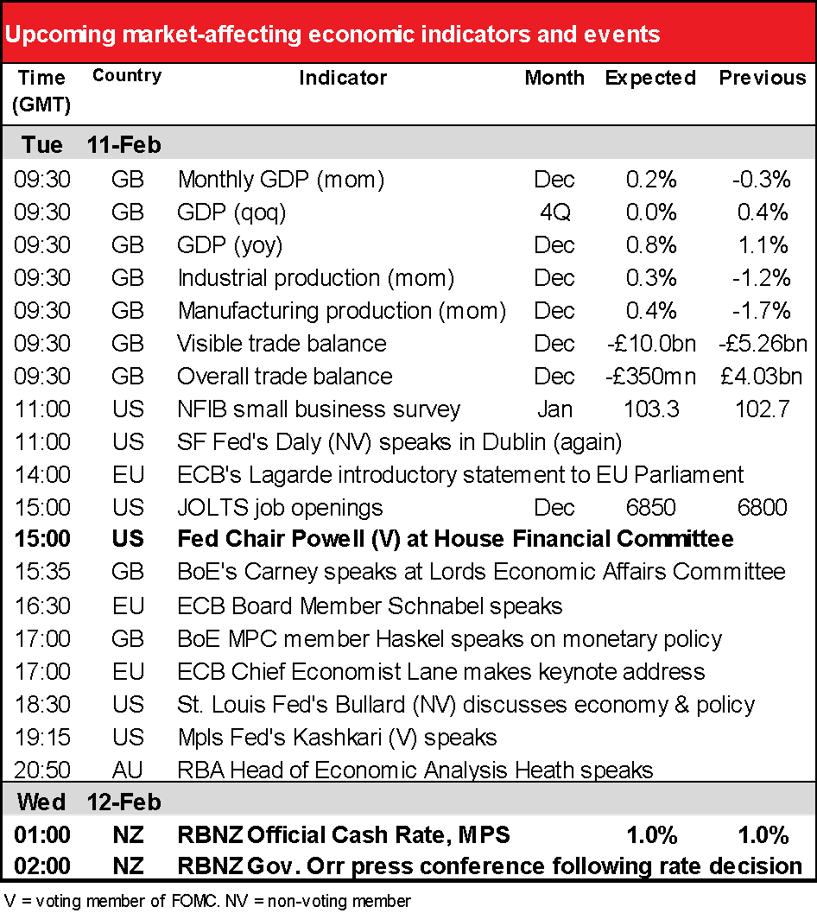 Finally, we get a “Day C” – a day that isn’t either “risk on” (Day A) or “risk off” (Day B) but rather individual currencies marched according to the beat of their own individual drummers. Perhaps the reason the markets can behave in this way is that there is a bit of a “risk on” mood, as some factories in China are apparently going back to work and there are reports that scientists in Shanghai have isolated strains of the virus, which is the first step towards creating a vaccine. US stock markets were higher overnight and most Asian equity markets are higher today too, including Chinese stocks.

The outperformance of sterling is surprising, given that yesterday there was only bad news for Britain as far as I could tell:

My guess is that it was a technical rebound after GBP/USD suddenly plunged to 1.2872, the lowest level since November. Bloomberg gave some technical mumbo-jumbo about “satisfying the completion of a hanging man on a monthly basis” etc etc. Or perhaps people are taking a position ahead of today’s UK GDP figures (see below) and Bank of England Gov. Carney’s testimony in the House of Lords. There may also have been some selling of EUR/GBP as a way to play the weakening euro. Which brings us to:

On the other hand, EUR was the weakest of the major currencies as the pair broke below a prior low of 1.0941, confirming the momentum towards the next support at 1.0900 (the recent low set back in October). If it breaks through that, the next major support line is at 1.0500. I showed this graph yesterday but I’ll show it again today to explain what’s going on here: simple economic outperformance by the US as European indicators miss expectations (e.g. disappointing industrial production figures from Italy, Germany and France) vs stronger-than-expected US data (e.g. last Friday’s US labor market data). 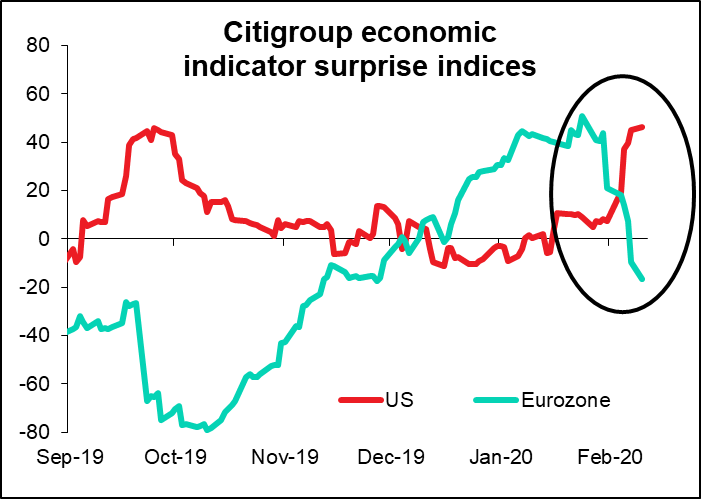 Also US equities are outperforming European equities, which may result in outflows of funds from Europe into the US and repatriation of US investments in Europe. This factor of course is connected to the economic outperformance mentioned above. 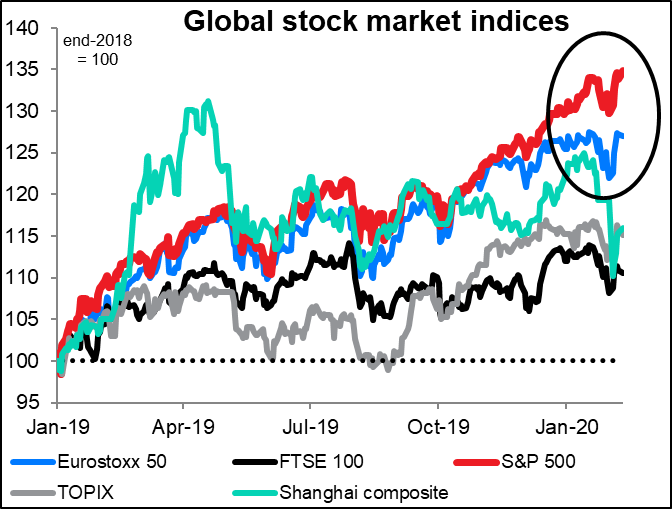 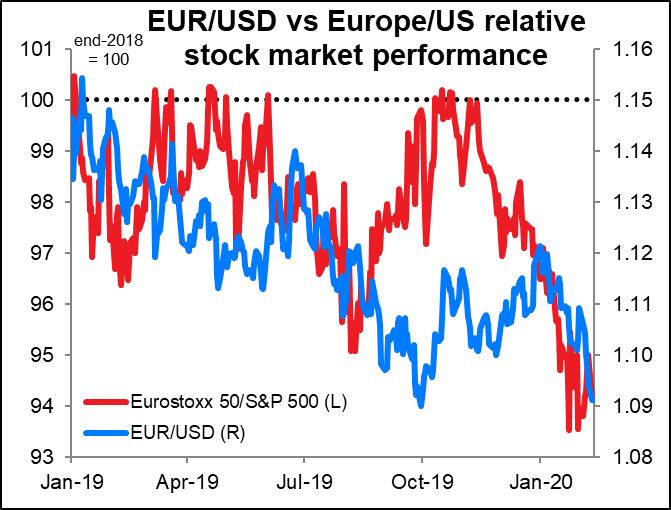 Meanwhile, AUD/NZD continued its seemingly inexorable rise. Perhaps if the Reserve Bank of New Zealand is even neutral tonight, this pair could come in for some profit-taking (see below).

Lots on the schedule today! In particular, there is a vast number of speakers, from the Fed, the Bank of England and the ECB. I would expect them to be the market’s focus of attention today, rather than the indicators.

The one exception is likely to be the first set of data we get. The day starts with UK short-term indicator day. That includes the monthly GDP figures, industrial & manufacturing production, and the trade data.

The key one here is UK GDP, which this time includes the figure for Q4 as well as for December alone. The qoq figure is expected to be flat, i.e. unchanged from Q3. This is in line with the consensus forecast for the monthly GDP figure for December, +0.2%. 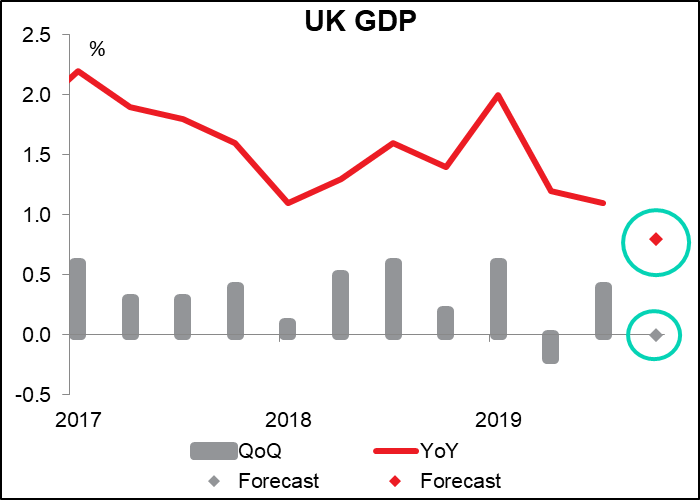 A flat GDP probably won’t be bad for sterling, in my view. That’s because at the moment the market believes that that’s the trough for UK growth (see graph below) and that it will rebound to +0.3% qoq in Q1 and +0.4% qoq each quarter for the rest of the year. Unless the figure is bad enough to force a reassessment of the future prospects of Britain, it should be neutral for the pound. Although I must say, I think those forecasts are overly rosy – but I’m generally a pessimist (I started out as a bond analyst, and bond analysts are always looking for disaster as that’s when bonds really soar!)

Of course, with the coronavirus hitting global economic activity, all growth forecasts are subject to change without notice. The UK has declared the coronavirus an “imminent threat.” If Britain goes into lockdown too – which I doubt, but you never know – then of course all bets are off. 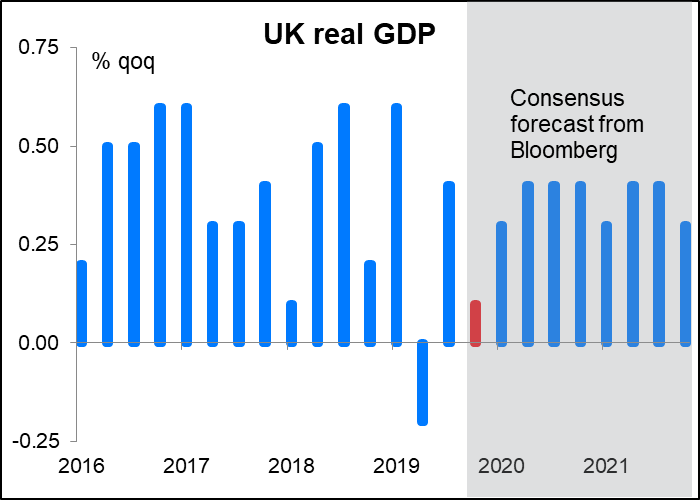 (Sharp-eyed readers will notice that the Q4 forecast in the above graph is not flat, but rather is for +0.1% growth. This is because Bloomberg has two different sets of forecasts:  the near-term forecasts, which they get by calling around and surveying brokers, and the long-term forecasts, which they get by scraping brokerage research reports. The forecast in the first graph is the short-term one, whereas the second graph uses the long-term forecast. I kept it that way so that the second graph would be consistent throughout the forecast period. QoQ growth of +0.1% in Q4 is not impossible; it would require December growth of +0.3% mom, whereas the consensus forecast is +0.2%, so not so big a beat.)

UK industrial production and manufacturing production are both expected to be up slightly on a mom basis, with the yoy rate of change accelerating as well (or, more accurately, the yoy rate of decline becoming less negative). Nonetheless I’d say the figures are expected to be somewhat disappointing. That’s not a very big rebound after the fairly steep decline the month before. 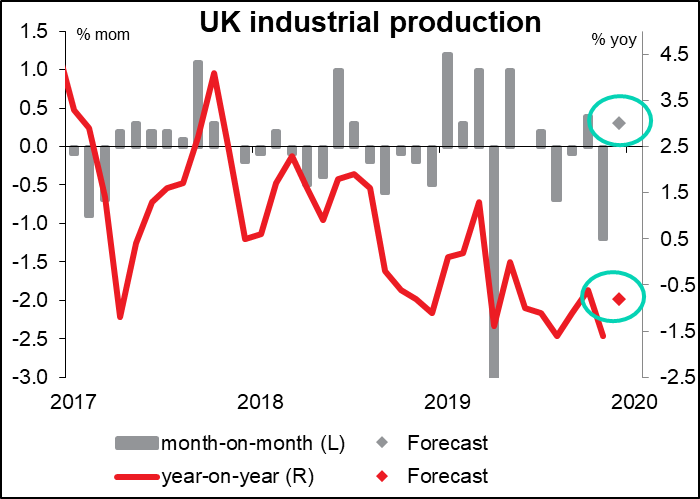 I think people will ignore this though, because they will figure either a) it’s going to turn up in January, as indicated by the manufacturing PMI (see below), or b) it’s going to get worse anyway because of the coronavirus. So I think this will be neutral for GBP. 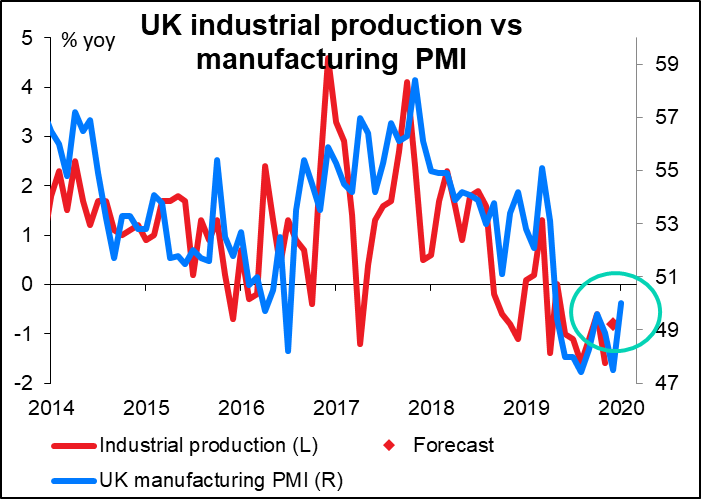 After moving into surplus in November, the UK trade balance is expected to fall back into a small deficit in December. But don’t think this has anything to do with the country’s competitiveness or trade performance. 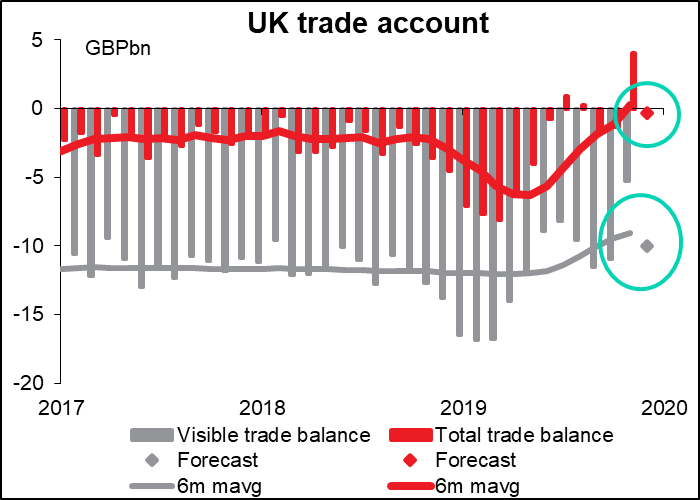 The trade balance has been heavily distorted by a surge in imports starting from late 2018, when the country started stockpiling ahead of what they expected to be the Brexit day. Now that Brexit has come and gone without much disruption, they are destocking, and that’s going to reduce imports for some time. Last month that pushed the overall trade account into surplus, but the market expects that much of the destocking has run its course and the trade account will trend back towards its usual deficit. 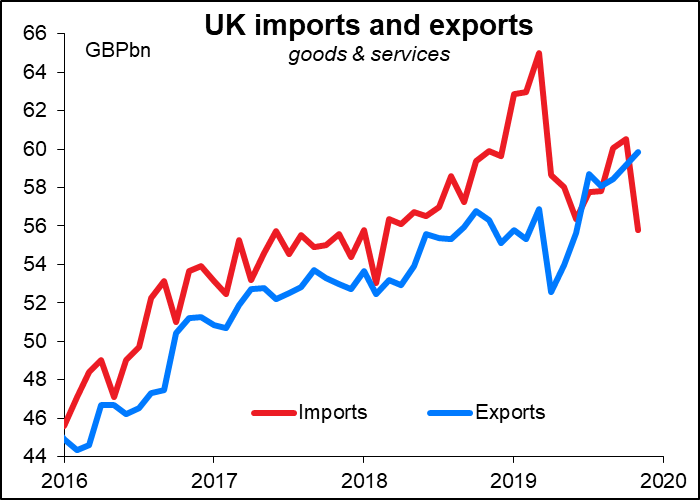 When the US comes in, the first indicator will be the National Federation of Independent Businesses (NFIB) small business optimism survey. This is expected to rise slightly, but to remain below its recent peak, much less below the peak hit in 2018. That’s in contrast to consumer confidence, which has been steadily recovering. I would guess the difference is the impact of Trump’s trade war on small businesses. Steady optimism is better than falling optimism, but it’s not enough to give anyone a reason to buy. USD neutral to negative 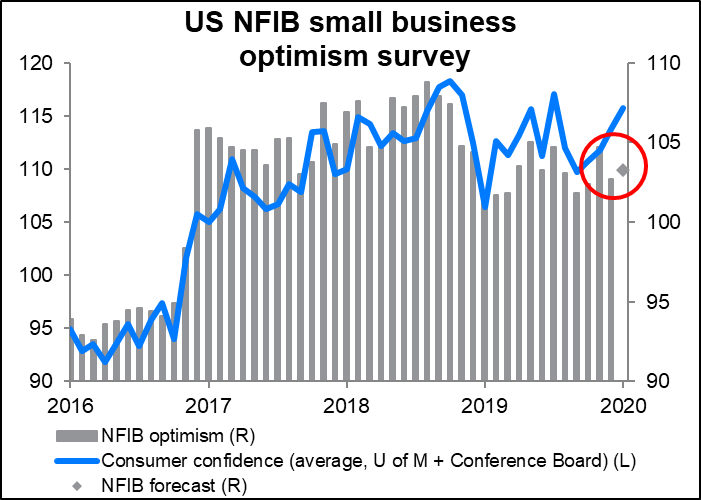 Then we get the Job Openings and Labor Turnover Survey (JOLTS) report. This was one of former Fed Chair Janet Yellen’s favorite indicators of the health of the labor market, but I haven’t heard much about it since she departed the scene. (In fact, Bloomberg rates it only at one bar, vs three bars for the NFIB – four bars is maximum interest from subscribers.) While the forecast of 6.85mn job openings is a bit higher than the previous month and is still well above the 5.89mn unemployed persons in the latest unemployment data, it’s still not encouraging – openings have peaked. That’s slightly worrisome, given that the participation rate rose in the latest payroll data. I’d say the JOLTS report is mildly USD negative, if indeed anyone cares about it any more. 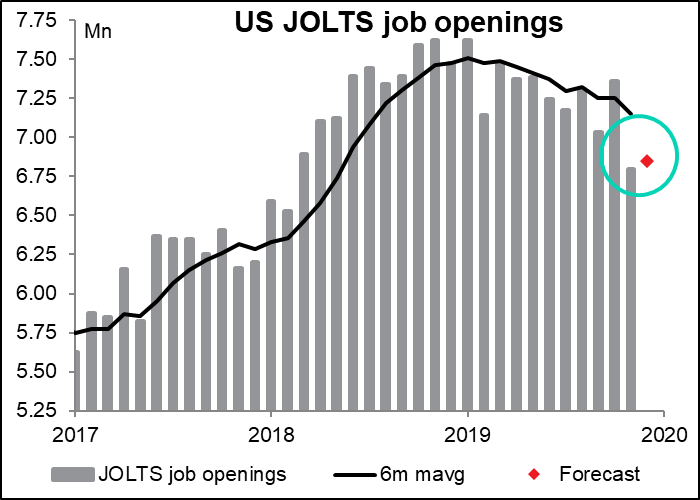 Then the market will stop while Fed Chair Powell delivers The Testimony Formerly Known As Humphrey Hawkins to the House Financial Services Committee. The Fed Friday released its semi-annual Monetary Policy Report to Congress. It mentioned the coronavirus several times, saying it “presented a new risk to the outlook.” That’s bound to be one line of questioning, but does Powell know anything about this that others don’t? If he does, he’s probably not going to say it in public.

Outside of that, the Monetary Policy Report didn’t indicate any big change in the Fed’s stance, and I wouldn’t expect Powell to do so either. He’s speaking here on behalf of the entire Federal Open Market Committee (FOMC), not his personal view. The FOMC meeting and his press conference afterwards were about two weeks ago. I’d expect him to sing the same tune that he sang back then. To remind you, he said monetary policy was “well positioned” and “appropriate,” but could be changed if there were a “material reassessment” of the outlook. It was nothing new then and it’s not likely to be anything new when he says it again this coming week. The Fed’s recent repo operations are also likely to be a big topic of interest. Several Democrats on the Senate Banking Committee have sent him a letter asking questions about them.

Then overnight, we get the only major central bank meeting of the week:  the Reserve Bank of New Zealand (RBNZ). The market isn’t expecting the RBNZ to change rates any time soon, and those expectations haven’t changed much recently, either. 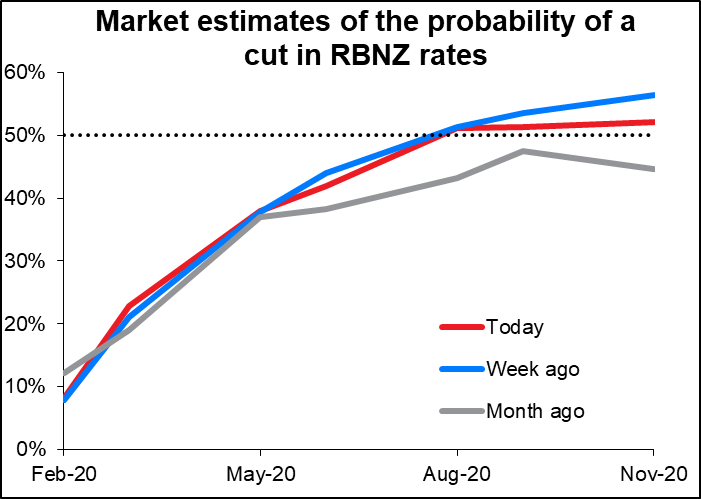 The key point for this week’s decision was Wednesday’s New Zealand employment data. Like the Fed, the RBNZ has a “dual mandate” – it’s required to set monetary policy “with the goals of maintaining a stable general level of prices over the medium term and supporting maximum sustainable employment.” That level isn’t spelled out, but at the last RBNZ meeting, in November, Monetary Policy Committee members opined that “employment remains close to its maximum sustainable level…” That was when the unemployment rate was 4.1% – it fell to 4.0% in Q4. So if it was close then, it’s even closer now. 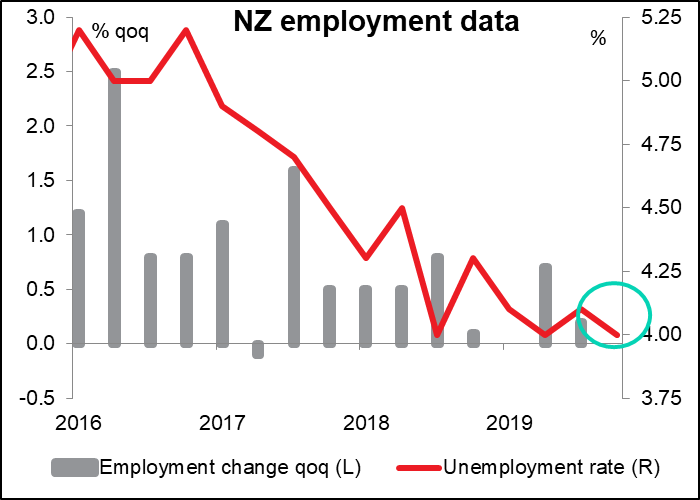 Meanwhile, inflation is right in the middle of the RBNZ’s 1%-3% target range, and inflation expectations are well anchored at that level, too. 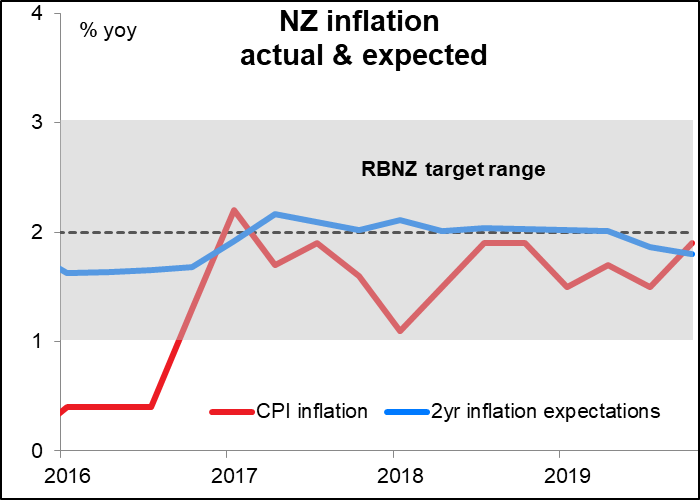 Accordingly while they may make some worried noises about the impact of the coronavirus on the New Zealand economy, I would expect them to echo the Reserve Bank of Australia’s relatively optimistic response and not make that many changes. I expect a relatively dull meeting with little market reaction. 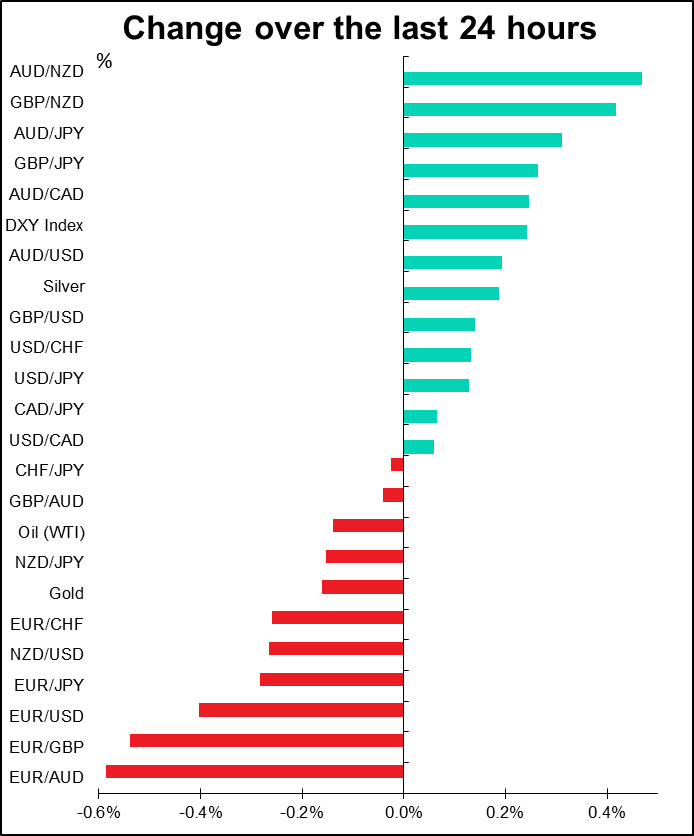