You are at:Home»MARKET PREVIEW»GBP Down on Weak Retail sales; BoJ Meeting

The dollar is stronger all around this morning, except vs JPY. USD rose on Friday after US housing starts beat expectations and US stock markets moved further into record territory.

The big move was against GBP, which took a big hit on Friday following the disasterous UK retail sales figures for November. Including petrol, they were expected to be up 0.6% mom but instead were down 0.6% mom. You can see in the graph how badly the figures missed expectations. 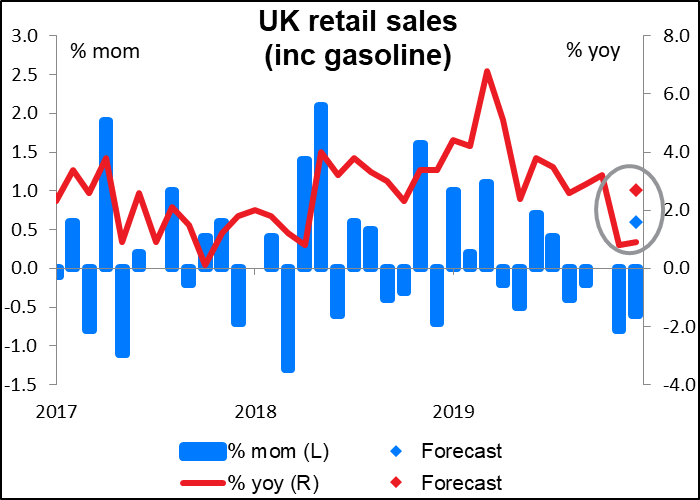 The disappointing figures come against the background of a debate on the Bank of England’s Monetary Policy Committee “over the relative merits of near-term stimulus to reinforce the expected recovery in UK growth and inflation,” as BoE Gov. Carney put it recently. Two MPC members – Silvana Tenreyro and Gertjan Vlieghe – said they’d vote for cutting rates if there are no signs of improvement in the economy  — which so far seems to be the case. This would be in addition to the two members (Jonathan Haskel and Michael Saunders) who said at the December meeting that they would like to see a cut in rates. Two + two = four = nearly half of the nine-member committee.

As you can see, the market’s estimate of the likelihood of a rate cut this year has increased dramatically. Adding economic distress to the divisive politics of Brexit and the difficult trade negotiations ahead is a recipe for disaster for sterling. We await Friday’s preliminary purchasing managers’ indices (PMIs) for sterling with some trepidation (especially as in my case, I’m waiting to collect some GBP from various banks that owe me money and watching it depreciate in value every day). 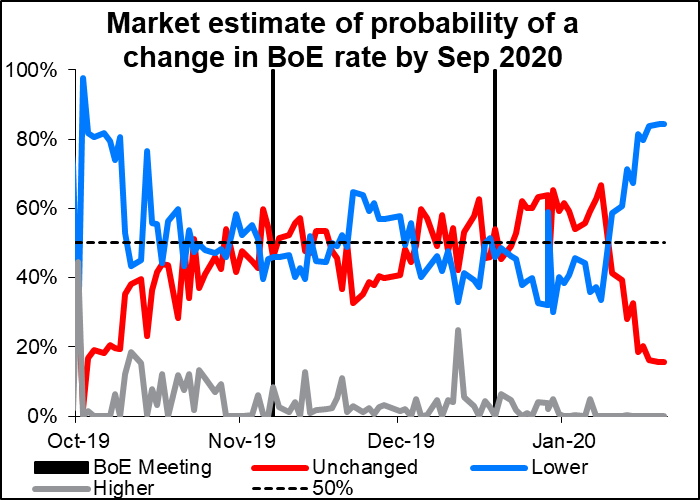 The calendar is really empty today. No major indicators from the EU or the UK, and US markets are closed for Martin Luther King’s birthday.

I put the Swiss sight deposits in the calendar because Switzerland was recently cited in the semi-annual US Treasury report on currency manipulators. The Swiss National Bank argued that it was well within its rights to intervene in the FX market. Traders will want to see if it’s really keeping up. The figures were as of 17 January (Friday), and the report was released on 13 January (Monday), so the SNB had time to react to the report. Their intervention is to a large degree a response to what the market does, and the market pushed CHF up strongly in response to the Treasury report, so it will be interesting to see whether they continued intervening, next week as well as this week. In the previous week, sight deposits actually fell despite the continued appreciation of CHF vs EUR, so it’s clear that there’s more going on here than just knee-jerk reactions. 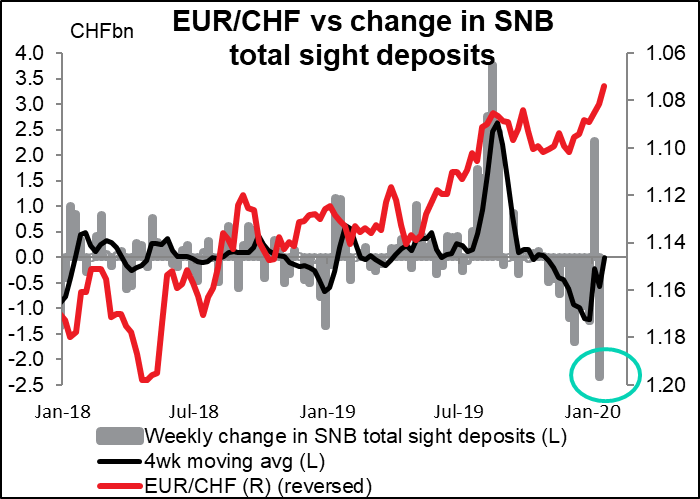 Other than that, the only thing on the calendar is the Bank of Japan Policy (BoJ) Board meeting overnight. Given the improvement in the global trade picture, the BoJ may upgrade its assessment of overseas economies in its quarterly Outlook Report, which is to be released at the same time. The key point of interest will be whether that upgrade causes it to alter or even remove its rate-cut bias in the forward guidance contained in the statement it issues following the Monetary Policy Meeting. (“In particular, in a situation where downside risks to economic activity and prices, mainly regarding developments in overseas economies, are significant, the Bank will not hesitate to take additional easing measures if there is a greater possibility that the momentum toward achieving the price stability target will be lost.”) However, the turmoil in the Middle East and subsequent rise in oil prices may keep that statement intact for the time being.

The BoJ may well upgrade its FY2020 growth forecast from October’s 0.7% rate as a result of the fiscal stimulus package that the government announced in December. Since that forecast was already above the BoJ’s estimate for Japan’s potential growth rate of 0.57%, they are likely to stick with their view that the output gap is expanding gradually and inflation should eventually move back towards their 2% target. (Good luck with that! is my personal view, and the view of the market too, but they have to retain a show of confidence in their hopeless quest.) Japan’s national inflation data comes out on Friday, but this is of less interest ever since they started announced the Tokyo figures about two weeks before the national figures. 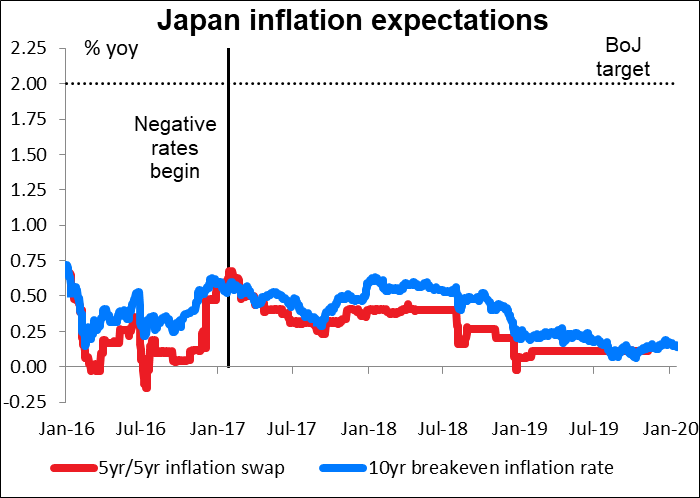 Accordingly, I think the odds of a BoJ rate cut could also fall following the meeting, but I wouldn’t expect that to have much impact on the yen, because with inflation so far below their target, policy is likely to be on hold indefinitely. JPY neutral. 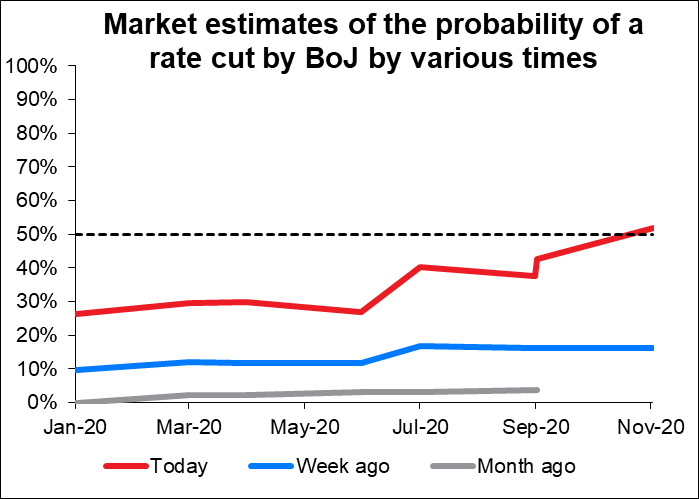 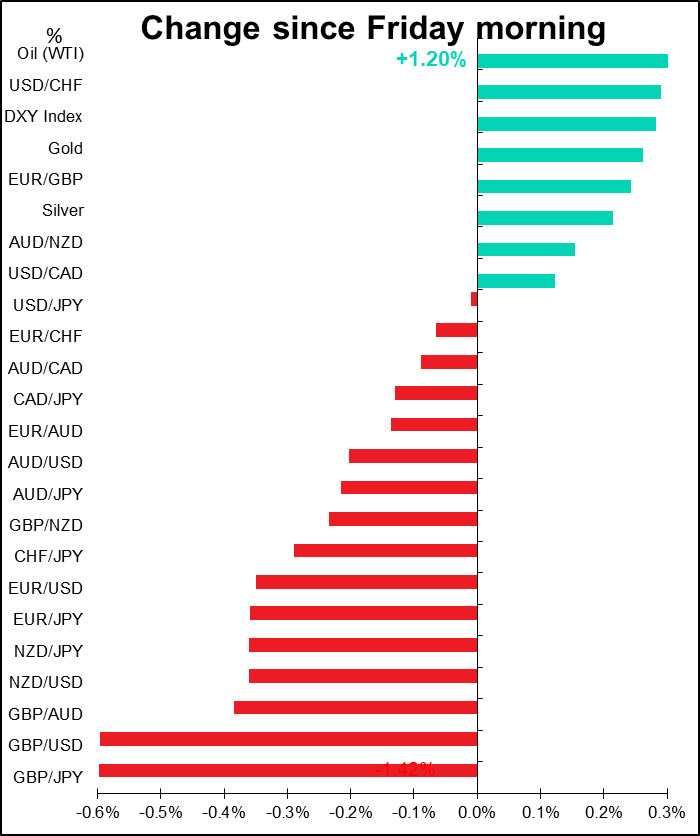