You are at:Home»MARKET PREVIEW»GBP Down on EU Challenge; US Retail Sales

Not much going on in the FX market this morning – overall changes are quite limited. There are only two moves worth noting: CHF moving up and GBP moving down.

It’s simple to explain the decline in GBP: the EU launched legal action against Britain over alleged breaches of the Brexit deal on Northern Ireland. Brussels said steps by the UK government to unilaterally ease trading conditions for Northern Irish businesses amounted to a breach of the Brexit treaty. The process could result in Britain being taken to the European Court of Justice and facing trade sanctions. That’s all British industry needs. When you consider that UK exports to the EU have been around 48% of total UK exports (2015-2019), and when you look at what happened to UK exports to the EU immediately after Brexit anyway (-40.5% mom vs +3.6% mom for exports elsewhere) you can see the toll that this could take on British industry. Of course, if you can see that, you can probably see what Brexit was a bad idea for the UK to begin with, but that’s another story. 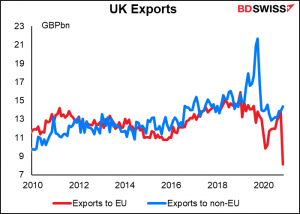 I’ve been fundamentally bearish on GBP for ages now based on the idea that Brexit would be a never-ending disaster for the country. So far I’ve been largely correct on my economic analysis but not on the market impact. Either the conclusion was so deeply baked into the market ahead of time – after all, the referendum was in 2016 so there were years to get used to the idea – or the possibility of a “hard Brexit” was so prominent in people’s thinking that the actual signing of an agreement, any agreement, was a relief. Or a third possibility that I’ve read about but will never be able to corroborate: that some countries, notably China, used the weak sub-1.30 USD/GBP to diversify their reserves. We’ll have to wait for the March update of the IMF’s Currency Composition of Official Foreign Exchange Reserved (COFER) data to get an idea.

As for CHF, there doesn’t seem to have been any particular trigger for the continued strength in the currency, which was under serious pressure until recently. I suspect it’s just a continuation of the bounce that we saw last week, which may have been prompted by efforts by the European Central Bank (ECB) to limit the upside for German Bund yields by stepping up its bond purchases. That will limit the attractiveness of investing in EUR for Swiss investors, seeing as German Bunds yield even less than CHF government bonds already. JPY has now replaced CHF as the worst-performing G10 currency so far this year. 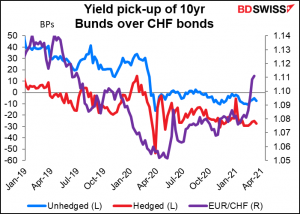 I wonder if there might be some “flight-to-safety” within Europe going on as the European vaccine rollout falls further behind. Germany, France, and Italy joined several other European countries yesterday in suspending the distribution of the Oxford/AstraZeneca vaccine pending formal guidance by the European Medicines Agency (EMA). The news didn’t affect EUR/USD but may have contributed to the fallback in EUR/CHF. (FYI, I got a shot of that vaccine on Friday and suffered no more than a sore shoulder.) The EMA will issue guidance on the use of that vaccine today.

Suspending use of the vaccine seems to me to be a bad idea as the trend in European countries is starting to go in the wrong direction yet again, particularly in Italy. Switzerland was hard-hit last November but has since managed to get the pandemic more under control. Nonetheless there too the numbers are starting to turn up yet again. 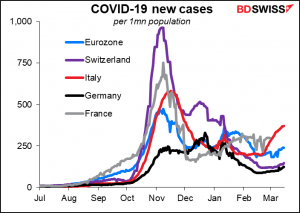 In any case, I remain bearish on CHF over the medium term. I expect that as yields rise elsewhere in the world, CHF (and JPY) will be used as low-yielding funding currencies for carry trades. That should keep the currency under pressure, in my view. 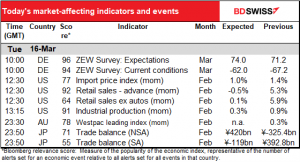 The ZEW survey of pundits & analysts is expected to show an improvement in both the current situation and expectations. The current situation index is forecast to rise by more than expectations, suggesting that expectations are nearing their limit – not unsurprisingly as they’re nearly the highest they’ve been in ages. September’s 77.4 was the highest since 81.0 in June 2000, so a figure like what’s being forecast – 74.0 – is excellent. Bear in mind that this survey represents sentiment and expectations, not the experience of people who actually make & sell things like purchasing managers. 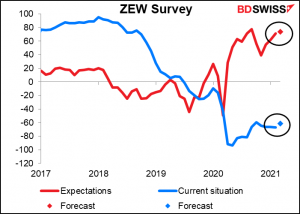 Today’s US retail sales is (are?) the biggest US indicator of the week. It’s expected to be down slightly, which would be no surprise after the unexpected 5.3% mom surge in the previous month, thanks to the arrival of stimulus checks combined with growing vaccine distribution. The terrible weather during the month also didn’t help spending any. Besides, with $1,400 checks coming down the pipeline to most Americans, expectations for spending in March and April are probably pretty good. (I admit, I bought some new stereo equipment in March, my first major purchase in a year.) I think a low number would be brushed aside as just a temporary interruption before the pandemic support checks appear and spending takes off again. 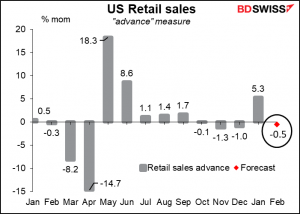 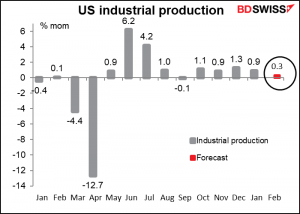 Overnight, Japan’s trade data is coming out. This isn’t as closely watched as the current account/balance of payments version, but it is worth watching. January and February are always difficult months because of the impact of New Years’, including the Lunar New Years and trade with China. The forecasts show a turnaround in the NSA figure from a trade deficit to a surplus, while the SA figure is expected to show the opposite – a plunge into deficit. Exports were probably hit by the Lunar New Year, while imports were higher due to rising oil costs. 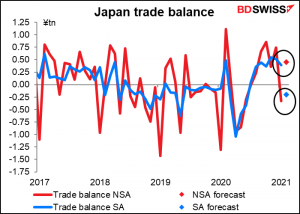 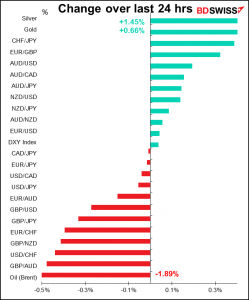