The main action yesterday was in stocks, which evidently didn’t like the idea of higher interest rates. Speaking at an event, US Treasury Secretary Yellen said, “It may be that interest rates will have to rise somewhat to make sure that our economy doesn’t overheat, even though the additional spending is relatively small relative to the size of the economy. So, it could cause some very modest increases in interest rates to get that reallocation. But these are investments our economy needs to be competitive and to be productive.”

Her comments made waves because a) she’s a former Fed Chair herself, b) it’s unusual in normal administrations for Cabinet members to comment on interest rates (the previous regime was an aberration), and c) she had seemed to subscribe to the Fed/White House view that any inflationary pressures would be transitory. Stocks had opened lower anyway and this was just another kick in the pants. Tech stocks were particularly badly hit. The NASDAQ composite was down 2.9% at the low, while the broader S&P 500 was off as much as 1.5%. The NASDAQ subsequently recovered somewhat to end down 1.9%, while the broader S&P 500 was off only 0.7%.

European stocks also had a rough day. The German DAX fell 2.5%, its largest one-day fall this year, while the Europe-wide STOXX 600 also fell -1.4%.

Shortly after the market closed Yellen realized her gaffe and “clarified” her statements. “It’s not something I’m predicting or recommending,” she said at a different event. “If anyone appreciates the independence of the Federal Reserve, I think that person is me.” The whole affair is kind of laughable anyway, because what she said was common sense anyway and hardly aggressive. But the market always reacts when an official has the audacity to say something that’s not the party line, even if it’s true.

The hit was broadly confined to the stock market. In fact, bond yields actually fell on this “risk-off” move, which is bizarre if the move was caused by fear of higher inflation and rates. Ten-year Treasury yields ended the day down 0.5 bp at 1.59%.

Elsewhere, the recovery rally continued, with most components of the Bloomberg commodity index showing gains on the day. This wouldn’t have happened if investors really thought that growth was going to be choked off by higher interest rates. The index is at its highest level since 2015 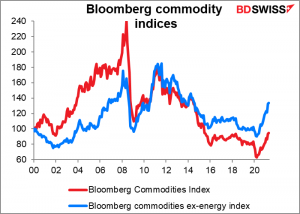 Energy was particularly buoyant, as you can tell from the graph above, after the American Petroleum Institute (API) announced a massive drawdown of 7.7mn barrels of crude oil. This compares with market forecasts for today’s US Department of Energy estimate of -2mn. Oil prices were trading higher before the figure anyway as the EU and several US states plan to relax their lockdown restrictions. Given the good performance of commodities, I would expect the commodity currencies to recover today. NZD/JPY had a particularly big fall yesterday; perhaps it’ll come in for some mean reversion today. Also, EUR/CHF moved lower; that might rebound as well as risk sentiment recovers.

In the FX market, traders are focusing more on the near-term risk of a more hawkish Bank of England than on the long-term risk of Scottish independence. You can read my view on the BoE meeting in my ever-popular Weekly Outlook, but just to save you the trouble, here’s what journalists call the “nut graf”:

This favorable [economic]background is likely to result in a substantial upward revision to the forecasts in the Monetary Policy Review. That could provide the justification for the MPC to follow the Bank of Canada’s footsteps and begin tapering its bond purchases. I expect the Committee to vote unanimously to keep Bank Rate and the total amount of bond purchase unchanged at GBP 895bn but to slow the weekly pace of bond-buying from its current GBP 4.4bn a week to around GBP 3.5bn or GBP 3.0bn. That would allow the Bank to complete its current QE program of GBP 150bn and reach its Asset Purchase Facility (APF) target of GBP 895bn by the end of 2021. Otherwise, they will hit the target around mid-October and either have to stop it then or decide to extend it at a time when the UK economy should be on the mend, according to their forecasts. 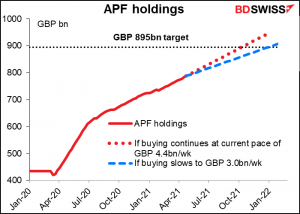 As I said elsewhere in the Weekly and in yesterday’s extensive video on the subject, the Scottish local elections Thursday are a long-term risk to the United Kingdom but not a short-term risk. If the pro-independence parties win a majority, which seems likely, that doesn’t mean Scotland would become independent tomorrow. There are several more hoops they would have to jump through, and some are quite narrow:

This may be why people are more focused on the Bank of England meeting than on the Scotland vote. The main risk is that questions start arising about the long-term cohesiveness of the UK. Such questions are well warranted, according to a recent Ipsos MORI poll, which found that a majority of UK residents don’t think the UK will exist in its current form in 10 years – and many have their doubts even about the next five years too. 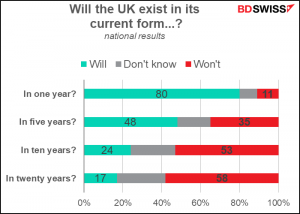 But of course, who holds a position in FX for 10 years? 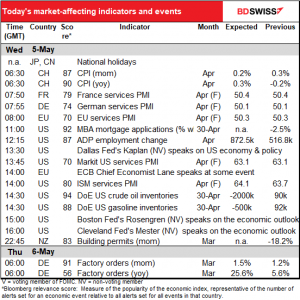 The European day started out with the Swiss consumer price index (CPI), which I discussed yesterday. The domestic version came in exactly as forecast (+0.2% mom, +0.3% yoy) but the EU harmonized version showed the economy still in deflation (-0.1% yoy vs expectations of +0.4% yoy, previous -0.2% yoy). I’m not sure anyone trades CHF on inflation data anyway though as the Swiss National Bank isn’t likely to change its monetary policy until the European Central Bank does regardless of what happens to Swiss inflation. 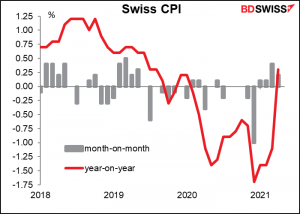 Then throughout the day we’ll get the final versions of the service-sector purchasing managers’ indices (PMIs), plus of course the one-and-only versions for those countries that don’t have preliminary versions.

We also get the Institute of Supply Management (ISM) version of that index, too. On Monday, the ISM version of the manufacturing PMI stunned the market by coming in much lower than expected (fell to 60.7 from 64.7 instead of rising to 65.0 as expected). That miss puts the forecast rise in the ISM index – which is forecast to top the Markit version slightly — at risk. 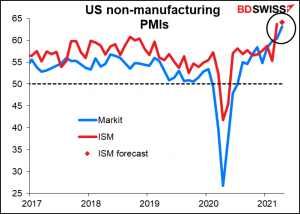 The employment and prices paid PMIs will also attract a lot of attention, although there aren’t any consensus forecasts. The employment index is at a relatively high 57.2, while the prices-paid index is at a very high 74.0, the highest since July 2008, just before Lehman Bros. collapse. Monday’s manufacturing prices-paid index was also at the highest since around then… 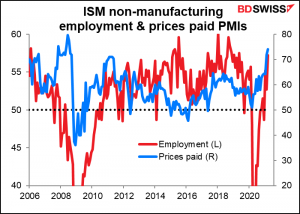 Next up is the star of the show today, the ADP employment report. Automated Data Processing Inc. (ADP) is an outsourcing company that handles about one-fifth of the private payrolls in the US, so its client base is a pretty sizeable sample of the US labor market as a whole. It’s therefore watched closely to get an idea of what Friday’s US nonfarm payrolls (NFP) figure might be. One point to note: the ADP adjusts its figures to match the final estimate of NFP, not the initial estimate that we get this Friday. So, while it’s one of the best guides to the NFP that we have, it’s not perfect by any means – in fact, neither is the NFP figure itself, since it’s always revised.

The ADP report this month is going for a pretty hefty increase in jobs, but not as hefty as the consensus forecast for the NFP itself, which at the moment is 995k. 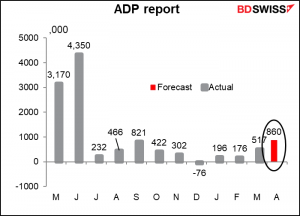 The error between the two has been quite normal on a percentage basis recently, except for January, when a tiny initial NFP (+49k) allowed for an enormous miss on a percentage basis. But “normal” doesn’t mean “good,” in this case. Even in 2019, before the pandemic, the difference between the two ranged from -191% of the NFP to +83%, so…It may be the best single number we have, but it’s not very good. 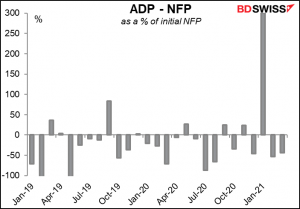 Then there’s not so much in the indicator world – although there are three Fed speakers and ECB Chief Economist Lane — until tomorrow morning, bright and early, when Germany announces its factory orders. They’ve already recovered to pre-pandemic levels (last month was 4.2% above the Jan/Feb 2020 level) and this month of course the yoy rate of comparison is forecast to go stratospheric thanks to last March’s collapse. The continued rise in orders should be seen as positive for the euro. 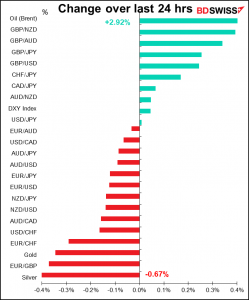