Yesterday is what I would call an almost perfect “Matthew Market” in FX. I’ve named it that after the line in Matthew 20:16, “So the last shall be first, and the first last.” You can see it from this graph, which charts the change in the currencies’ trade-weighted indices from Friday morning to Monday morning on the Y-axis (vertical) and from Monday morning to this morning on the X-axis (horizontal). If they perfectly reversed the previous day’s move they’d fall on the dotted line. As you can see, they’re all pretty close. 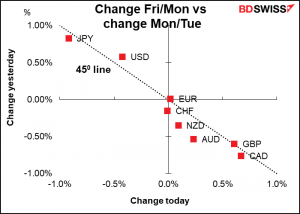 Somewhat the same in stocks too although most didn’t fully recover their Friday losses. 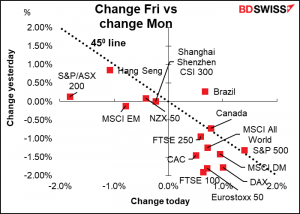 Similarly, yesterday I included a graph of how the price of copper was plunging as Treasury yields came down. Today I’ve got a graph showing how most commodity prices rose yesterday. 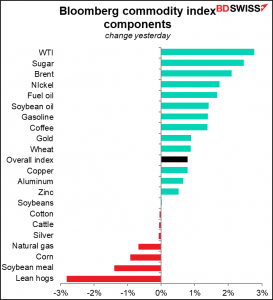 The thing was, there was hardly any news out yesterday to move the markets. The only thing of note were several Fed speakers. St Louis President Bullard (NV), a noted dove, said that with inflation over target and the labor market continuing to improve, the Fed could claim “at any time” that it had achieved its goal of “substantial further progress.” He also warned that “We have to be ready for the idea that there is upside risk to inflation and for it to go higher.” Given his position at the dovish extreme of the FOMC, I thought these comments were significant. Dallas Fed President Kaplan (NV), a hawk, said that he was in favor of beginning the tapering process sooner rather than later, his well-known position. However, New York Fed President Williams (V) said that he still sees tapering as “quite a ways off.” So, there’s some disagreement on this issue, which is a change from a few weeks ago when most of the Committee members were singing the same song.

Perhaps we’ll get more clarity today from Fed Chair Powell, who will testify before the House Select Subcommittee on the Coronavirus Crisis (see below). 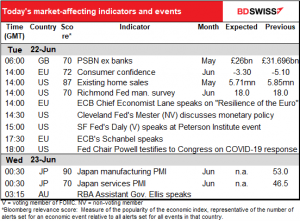 The schedule yesterday was pretty thin and today isn’t much better. 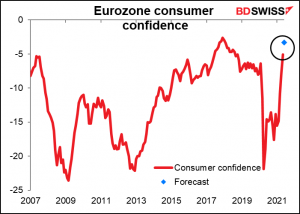 Consumer confidence in the EU is well above the average for the OECD countries. 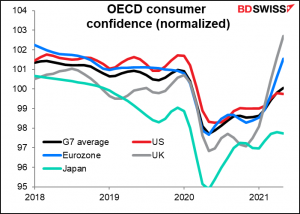 However, that hasn’t translated yet into above-average retail sales, unfortunately. So, while it’s nice to know, I don’t think it’s particularly bullish EUR. 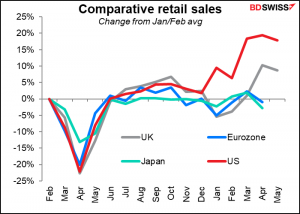 US existing home sales are forecast to be down 2.4% mom while new home sales (due out Thursday) are expected to be up 0.9% mom. If existing home sales are indeed down, I suspect it’s just because people are watching prices skyrocket and holding off selling in hopes that they go even higher. I follow prices in one area of Phoenix, Arizona, where my sister lives, and according to Zillow, prices have risen 10% in the last 30 days alone! Regardless that the city is suffering from a drought and temperatures there are hitting 440 in the afternoon (by comparison, Riyadh, Saudi Arabia is at 420). The US housing market has gone full Bitcoin. The Richmond Fed survey is expected to be unchanged from the previous month, in contrast to the Empire and Philly Fed surveys, which together fell slightly last month. Of course they’re also starting from a higher position (on average) so it stands to reason. For the Richmond survey, unchanged would be OK as it’s still signalling expansion.

The Bloomberg relevance score shows that the market doesn’t watch the Richmond Fed as closely as it does the Empire State or Philly Fed indices, perhaps because it’s released later, but investors certainly should: my research shows that among the five regional Fed surveys, it’s the best correlated with the Institute of Supply Management (ISM) manufacturing survey, which is what people are trying to forecast. (It doesn’t have much power at explaining the Markit manufacturing PMI however – the only one that’s good at that is the Empire State survey.) 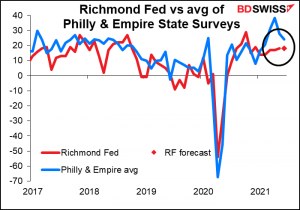 Next item up: As mentioned above, Fed Chair Powell will testify to the US House of Representatives Select Subcommittee on Coronavirus Crisis on Lessons Learned: The Federal Reserve’s Response to the Coronavirus Pandemic. “The hearing will assess the Fed’s emergency lending programs established in the early months of the coronavirus crisis, examine current Fed policies as our economy continues to recover, and consider actions needed to ensure a strong, sustainable, and equitable economic future.”

His opening statement has already been released (available here). His comments weren’t any different than what he said in his press conference following the FOMC meeting. He’s optimistic about the recovery, saying “job gains should pick up in coming months as vaccinations rise, easing some of the pandemic-related factors currently weighing them down.” He acknowledged that “inflation has increased notably in recent months” but repeated his usual forecast that “As these transitory supply effects abate, inflation is expected to drop back toward our longer-run goal.”

I doubt if there will be anything new of relevance to the FX market, but the market will scrutinize anything Powell says down to his grocery list, so you should be aware that he’s speaking. You can watch it here if you’re so inclined.

Overnight the preliminary purchasing managers’ indices (PMIs) from the major industrial countries begin, starting with Japan. No forecast available. The focus will be on the service-sector PMI, which unlike most other developed countries has yet to recover to the 50-line and indeed turned down last month. 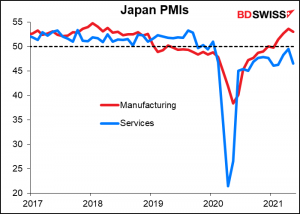 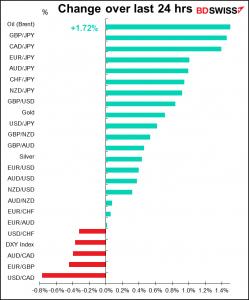